Beautiful Mistake by Mel Ryle is now available to read on Galatea, a reading app recognized by BBC, Forbes and The Guardian for being the go-to place for explosive new romance novels. Keep scrolling to read the first chapters or download the app for the full uncensored version. 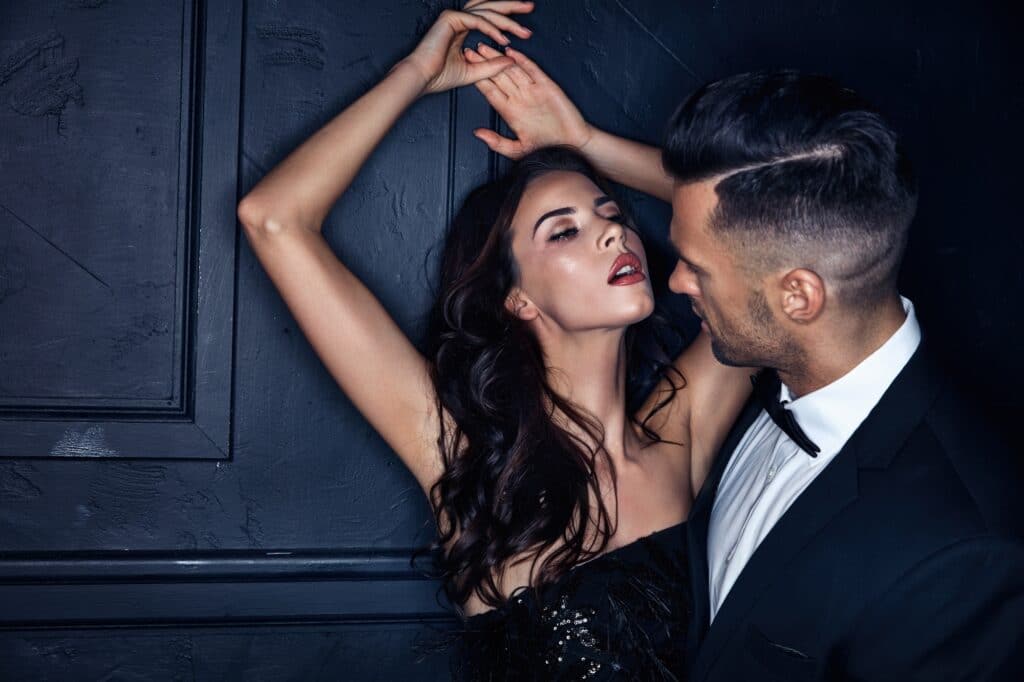 After Kyla catches her boyfriend cheating on her, she vows to never love again. But six months later, when her best friends force her to go out and find a man to rebound with, Kyla meets a mysterious wealthy stranger…who may want more than one night with Kyla.

Scroll down for a sample chapter, or read the full uncensored book on the Galatea app!

Chapter 4 - The Morning After

His body was sculpted like a statue, each muscle clearly defined as he pulled off his shirt and stepped in closer. I couldn’t resist him.

His gorgeous blue eyes didn’t leave mine as he cupped the side of my head with one hand, his thumb brushing my cheek.

I sat down on the bed and pulled him toward me. Our lips were so agonizingly close that I could feel the stubble on his carved jawline tickling me lightly. I breathed in his intoxicating scent with a sigh.

It had been three long months since I’d been this close to a man. I wanted him right now. And I would have him—

The alarm on my phone blurted like a goose call, smashing through my dream. It was Sunday, but I must have forgotten to shut it off.

That dream had been vivid…too vivid. My head was throbbing. I guess I’d had a few more drinks than I thought.

What had even happened last night?

Groaning, I rolled over and dismissed the alarm, only then noticing the bed was not my own. It was too…cloud-like.

My eyes snapped open to reveal sunlight glistening over what was, without a doubt, the most beautiful apartment I’d ever been in. And I worked in a hotel—I’d seen my fair share of presidential luxury suites.

The room was open and spacious, the wardrobe made of intricately-carved dark mahogany, and there was a car-sized TV mounted on the wall.

It was immaculately clean, except for the two sets of clothes hastily discarded.

I let out a gasp, sinking back into the cloud bed and pulling a pillow over my head. I’d never done anything this reckless.

Checking my phone, I saw the girls had sent me a barrage of texts.

Rose: Is his butt as cute as we thought?

I put the phone down and smiled.

I’d taken home a complete and total stranger. A stranger who…was no longer in the room…

I looked around but didn’t see him anywhere.

What if he came back?

He was just supposed to be a rebound. I didn’t really want to see him right now.

Last night, from what I could barely remember, had been pretty amazing. What if he decided he wanted more? That happened to Megan once.

No, I couldn’t risk it. I needed to sneak out before he returned.

I quickly donned my clothes—for some reason, my underwear were in the attached marble bathroom—and slipped out into a gorgeous hallway complete with oil paintings and an overhead chandelier, headed toward a large door that looked like the exit.

“Excuse me, Miss. Do you need any help?”

Spinning, I saw an older man with green eyes and graying hair, the driver from last night. His name, I think, was…Dante?

He chuckled. “We’re on the top floor of a penthouse, Miss. And that is a linen closet. If you’d like to make a quick getaway before my employer returns, might I suggest the elevator?” he said, nodding down a separate hallway.

I felt my face flush but kept my head high. “Thank you.” With an abrupt turn, I walked down the hall and pressed the call button.

“Thank you,” I replied, cutting him off. “But that won’t be necessary. Please let him know I had a…fun experience.”

“Fun experience.” He nodded. “I’ll pass along the message.”

The elevator arrived with a ding. I stepped in and pressed the close door button, trying to leave as quickly as possible.

I’d never experienced a walk of shame before, but now, as the clopping of my heels echoed through the pristine lobby, I felt like all eyes were on me and my Saturday-night dress.

Keeping my head high, I exited the building and hailed a cab home.

Rose: how was it?

Kyla: Sure. Anyone free to come over?

Kyla: We could watch a chick flick

Rose: plans with the parents

Coleen: I’ll be right over

Megan: We want deets too!

Kyla: Well, you’ll just have to wait then

Read the full uncensored version on the Galatea app!

I was actually relieved that Megan, Marie, and Rose couldn’t make it. They were great friends, but I really just needed some time and space to process.

Coleen was my best friend.

She’d followed me from college to the hotel, and not long ago had also gone through a traumatic breakup.

She might be coping with it drastically differently—by devouring every man she could get her hands on—but at least she might understand a bit better.

I stripped off last night’s dress, and stepped into the shower, letting the steaming water wash away last night’s adventures.

Part of me felt so icky. I didn’t know him.

But I’d also enjoyed it much more than I thought I would.

It had felt natural, like we somehow already knew each other. Very, very well.

How did two people who barely knew each other connect so well?

Maybe he was just very experienced? I’d only been with Alden, so what did I really know?

Well, this was a breath of fresh air.

Feeling clean, I put on sweats and ordered a pizza just as Coleen arrived.

After flipping through various movies, we finally settled on Pretty Woman.

We were just at the part where Richard Gere asks Julia Roberts for directions when Coleen beamed. “They have such great chemistry! Wouldn’t it just be amazing if this actually happened in real life?”

“Well…” I said, thinking about the penthouse I’d woken up in. “It kinda did.” On the screen, Julia Roberts had just taken over driving the Lotus Esprit because Richard Gere didn’t know how to drive stick.

Coleen glanced at the TV, her eyes widening. “He let you drive his car?”

I didn’t think her eyes could pop anymore, but somehow, they did. I quickly filled her in on everything, from the private bar to the steamy bits at his penthouse–and fleeing this morning.

“You just left?” she asked, exasperated.

“That’s the rules of the game. No names, no strings.”

“But you got his name. It’s Jensen. So, screw the rules. Was it…not good?”

“Actually…I think he was kinda amazing,” I admitted.

It was weird comparing Jensen to Alden, but being with Jensen had been so much more intense. Alden always just seemed to be moving through a checklist of tasks, like he was doing routine maintenance on a car.

Jensen, on the other hand, had immediately taken charge.

It didn’t feel routine, it felt like we were just…flowing.

I sighed. How could I explain? It didn’t matter how amazing the physical connection was.

And he was freaking amazing, I thought, as a small shiver trickled through me.

I immediately recoiled, aghast at my inability to control myself.

I’d let Alden in, and he’d really hurt me.

I couldn’t give anyone else that kind of power.

“It was like…like Kevin Yates,” I said, referring to Coleen’s ex.

They’d dated for the better part of a year and, according to her, he was ferocious as a tiger behind closed doors. He was also sweet and charming, and had a solid finance job. But ultimately, Coleen had broken off the relationship because something was just missing.

“Yeah,” she said, looking down. “I’m starting to think maybe I should have stayed with him.”

She shrugged. “Would have saved me a lot of pain. If I’d stayed with Kevin, I never would have met Landon.”

Landon was her recent trauma. Not only had he cheated on her, but he’d even hit her once. That had been the final straw, and thankfully, she’d left him.

But that turmoil had done a number on her. We used to regularly have deep heart-to-hearts; now, she preferred to keep things much more surface level.

“What Landon did is not your fault,” I said. “You’re way better off without that jerk.”

She flashed a small smile. “And you’re better off without Alden. So, try to remember that not every guy is him. Some guys are Richard Gere.”

For all of my kind words to her, I didn’t know if I could believe them myself.

Richard Gere might be charming, but let’s not forget, he made his fortune tearing apart what others had built.

I didn’t know if I could ever take the risk of giving my heart to another Alden.

For the second day in a row, my goose-honk alarm dragged me to consciousness. I really needed to change that sound effect.

I checked the time, and–

Crap! It was still set to my weekend wake-up time. I was late!

I rushed through the apartment, throwing on my pantyhose and Marc Jacobs heels while hurriedly dashing makeup on. I didn’t have time to do my hair, but I’d sort it out on the bus.

Coleen hadn’t stayed the night—otherwise, she’d probably have woken me. As I was heading out the door, my phone buzzed.

Rhea: Where are you?

Rhea: Something important is happening

Kyla: What is it?

I caught the bus as it was departing. Rhea was my personal secretary. If she said something was important, I believed it.

As the bus pushed its way through traffic, I thought through the scenarios.

Perhaps my boss Brian Leach was having a fit because I was late. That wouldn’t surprise me—he made no secret about his disdain for me.

When I got to the hotel, Rhea, dressed in a lime green pantsuit, met me at the front door.

Whatever had happened, it was important enough for her to brief me in person before I entered.

“What?” Mr. Mayfield was the hotel’s General Manager. He’d held the position for the past two decades. “When?”

“Effective immediately. Mr. Mayfield is out, and the new person begins.”

This was big news. “Thanks for telling me here,” I told Rhea. “You may have saved me from walking into a conversation unprepared.”

My mind was already racing. Why hadn’t it been announced? We should have had weeks to prepare for a new boss.

I was about to say more when someone moving in the hotel lobby caught my eye. Glancing over, I noticed a large, imposing man confidently striding toward me.

My rebound. The man I couldn’t stop thinking about.