Ryan and Jenny head to the Cayman Islands to celebrate their fifth wedding anniversary. But their planned second honeymoon plans didn’t include murder. With Ryan’s life on the line, the happy couple might finally realize what “till death us do part” truly means. 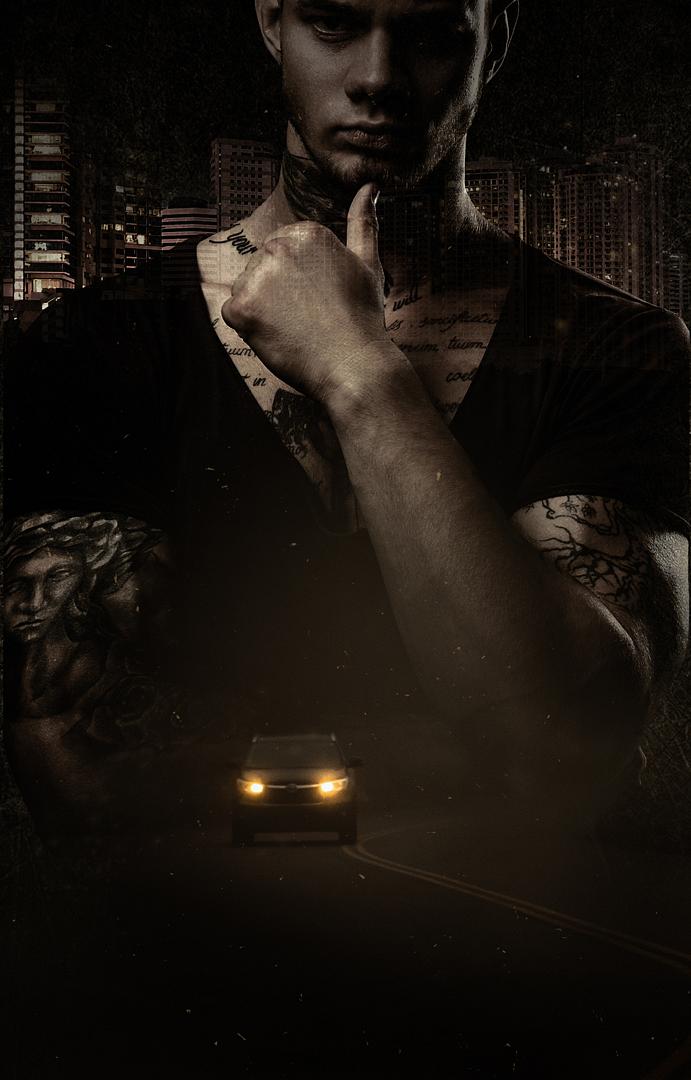 Ryan and Jenny head to the Cayman Islands to celebrate their fifth wedding anniversary. But their planned second honeymoon plans didn’t include murder. With Ryan’s life on the line, the happy couple might finally realize what “till death us do part” truly means.

The digital clock on the dashboard glowed 6.30pm when Ryan Cook reversed the black, highly polished luxury Lexus rental from the drive of his home. He paused to take one last check of his double-story house before shifting into drive and slowly rolling away.

Ryan started to relax now he was finally on the road. He adjusted his grip on the thick leather-bound steering wheel and settled back in the Lexus’s soft, cream leather seats that contoured to his body.

The luxury vehicle glided along the road in silence; not even wind noise could be heard from inside. He smiled to himself as his approving eyes scanned all the gadgets and controls on the illuminated dashboard. He was like a kid with a new toy.

Ryan glanced across at his wife Jenny. He couldn’t contain the smile that illuminated his face.

He was excited about this 3½ hour road trip down to Miami, almost as excited as he was five years ago when they did the same road trip on their way to their honeymoon. But compared to the rental they drove to Miami five years ago, this road trip will be considerably more comfortable.

“Well…Grand Cayman, here we come,” Ryan said. “I can’t believe it has been five years since we were last down there.”

“Hasn’t it gone quick,” Jenny said. “I can’t wait to go back there for our second honeymoon.”

As Ryan slowly cruised their luxury rental through his neighborhood streets he smiled when he noticed Jenny’s focus was on her mobile phone - again.

“No, I’m not texting…” Jenny said. “I’m posting on Facebook about how excited I am to be spending our fifth wedding anniversary back in the Cayman Islands with you.” Her smile lit up her face.

“Now... I know I’ve asked you this already…” Ryan began. “But…as a last minute check, before we get too far from home…have you got all the details about the airline and accommodation bookings with you?”

Jenny smiled and slowly shook her head. “You have asked me that…twice now. And nothing has changed, Mr. Worrier.” She grinned.

“I have got everything with me that we need. But so you are reassured, I’ll tell you again… We are staying in the same suite at the Ritz-Carlton in Coconut Grove that we stayed in on our wedding night. I have told them we will be checking in late. The next morning we have a 10.30 American Airlines flight to the Caymans.”

Jenny pushed back a finger on her hand. “I have the flight itinerary…”

She pushed back a second finger. “And I’ve got the passports...and the visas…” she said, pushing back a third finger.

“Oh, I forgot to tell you though… I couldn’t get the same villa on Grand Cayman that we stayed in on our honeymoon, but I was able to get the one next door.”

Ryan shrugged. “I’m sure it will be just as special. And I promise I won’t ask again if you have everything.”

”That’s alright…I don’t mind, really,” she said. “After all, it’s better to be sure than arrive there and find we have forgotten something.”

The bluish tinge from the Lexus’s high intensity headlights cut through the winter-like darkness as they made the short drive from their home in Windermere towards the on-ramp of the Florida Turnpike.

Jenny extended her hand out in front of herself to admire the sparkling 18 carat gold, diamond encrusted eternity ring Ryan gave her for her anniversary present on Thursday— the actual day of their anniversary.

“It really is a beautiful ring,” Jenny said. “I love it.” She rested a comforting hand on his thigh as he drove.

“I’m yours now for eternity…” she said with a loving smile.

Jenny smiled and slowly shook her head at his corny comment. “I am so looking forward to this vacation,” she said.

Traffic was surprisingly light for a Friday night as they made their way along Conroy-Windermere Road, a wide stretch of road with two lanes in each direction, separated by a tree lined, grass covered verge.

Two vehicles—one in each lane—were stationary at the red stop light when they approached the intersection with Dr Phillips Boulevard. Ryan pulled up behind the vehicle located on the inside lane.

As he waited for the signals to change they exchanged a loving smile. Such was their excitement, they were like newlyweds all over again on their way to their honeymoon vacation.

Ryan drummed his fingers on the steering wheel waiting for the signals to change. “Once we finally get on the turnpike the time will go quick...we’ll be there in no time,” Ryan said.

Jenny’s head rested on the soft leather head rest while she smiled across at her husband. Her sparkling emerald green eyes were full of love and admiration.

“I don’t care how long it takes when I’ve got you to keep me company,” Jen said.

When the signals turned green the car on the right moved off, but the car in front of them failed to move. Ryan frowned.

“Come on,” he said with a tone of impatience. “They’re not going to get any greener, buddy.”

But the car didn’t move. “Do you believe this guy…?” Ryan said.

“I don’t think there is anyone in the car,” Jenny said.

Ryan squinted through the back window of the vehicle in front. “You know what…? I think you are right....it looks empty. They must’ve broken down and gone for assistance or something.”

Ryan lowered his eyes to shift the gear into reverse. As he did so, his driver’s side window exploded inwards, showering him with hundreds of small glass fragments.

Ryan’s stunned eyes fell to his glass-covered lap. What the hell just happened?

It took a few moments to compose himself, before his thoughts moved to his wife. He looked across to Jenny in time to see her eyes widen in terror. She let out a blood curdling scream.

Ryan’s head snapped to his left to see what frightened his wife.

His eyes flared and his heart skipped a beat when he found himself staring down the barrel of a pistol. At the other end was a balaclava-wearing man with eerie, piercing eyes.

Ryan slowly raised his hands to the gunman, but before he could manufacture any words, the gunman motioned with his pistol and said, “Get the fuck out of the car!”

Ryan looked across at Jenny. “You stay there,” he whispered out the side of his mouth. He opened the car door and slowly stepped out.

Once out of the vehicle Ryan raised his hands to the gunman. The man was much shorter than Ryan’s six feet one inches, but while holding that pistol, the smaller man was intimidating.

Ryan’s eyes locked onto the darkness of the hollow barrel pointed directly at him. Looking down the wrong end of a pistol was incredibly unnerving.

All he could think was, I hope it doesn't fire. Ryan’s racing heart pounded against his chest. His stomach churned and his legs shook.

“Look, I don’t know what you want…” Ryan said. He extended his hand towards the car. “Do you want the car…?” Ryan said. “Take it…it’s yours.”

The gunman’s lifeless eyes glared back at Ryan without a response.

“Do you want money…?” Ryan reached into his rear pocket and removed his wallet. “I have some cash on me…you can have it…Please.. Just let us go.”

The gunman snatched the wallet from Ryan’s extended hand and shoved it into his jacket pocket. Ryan startled at the gunman’s aggressive movement.

The knot in his stomach tightened further when the gunman’s icy stare continued to glare at him through the narrow apertures in the balaclava.

Ryan’s mind raced. He hoped this guy wasn’t on anything that would cause him to do something stupid.

The gunman lowered his eyes to peer into the vehicle at Jenny. “You can get out too, bitch…” the gunman ordered.

With the gunman’s focus on Jen, Ryan saw an opportunity. His fight or flight instincts screamed at him to fight, and to do it now.

Ryan lunged at the gunman and locked a vice-like grip on the hand holding the firearm, forcing it down towards the safety of the ground.

Both men jostled to gain control of the weapon like two selfish siblings fighting over a popular toy, neither one wanting to let the other one have it.

While the gunman struggled to match the strength of the physically larger Ryan, he had superior street-smarts.

Without warning, the gunman head-butted Ryan across the bridge of his nose. A flash of white light filled Ryan’s vision.

It momentarily stunned him and caused him to partially release the pressure he’d applied to the gunman’s wrist.

The gunman lifted the firearm back up to a threatening level, but before he could fire, Ryan regained his focus and lunged at the gunman, re-applying his resistance.

While both men wrestled to gain control, the gun discharged.

The exploding sound of a gunshot echoed across the night time sky. Ryan startled. Both men paused their wrestle. Each one appeared surprised by the gunshot.

Ryan's face tightened. He peered inside their vehicle to check Jenny was OK.

His jaw dropped when he saw Jenny’s head slumped forward. Blood flowed freely from a small wound at the side of her head.

He rushed towards his wife. Fear etched into his face.

“Jen…” His trembling voice screamed out.

Before Ryan could fully enter the vehicle the gunman leveled his pistol and fired. The round smacked into Ryan’s back, sending him crashing to the ground.

His lifeless body lay face down on the roadway, beside the vehicle’s open door. The back of Ryan’s light colored shirt rapidly absorbed the dark red blood oozing from his wound.

The gunman pointed his firearm at the helpless Ryan, but quickly lowered his gun when he became fully illuminated in the headlights of an approaching vehicle.

The gunman slipped the firearm inside his jacket and ran to his vehicle parked in front of Ryan’s Lexus. He sped from the scene as the approaching vehicle arrived.