A Legacy for Katherine

Katherine knew she'd inherit the gothic Blackwell Estate when her beloved grandmother died, but she didn't know about the sinister forces she'd inherit along with it. In the neighboring Gauthier Mansion, broody Elias knows more than he's letting on about Katherine's ancestors. After all, strange forces lurk within both their family trees. They may have been regular high school kids yesterday, but now, they're fighting demons... 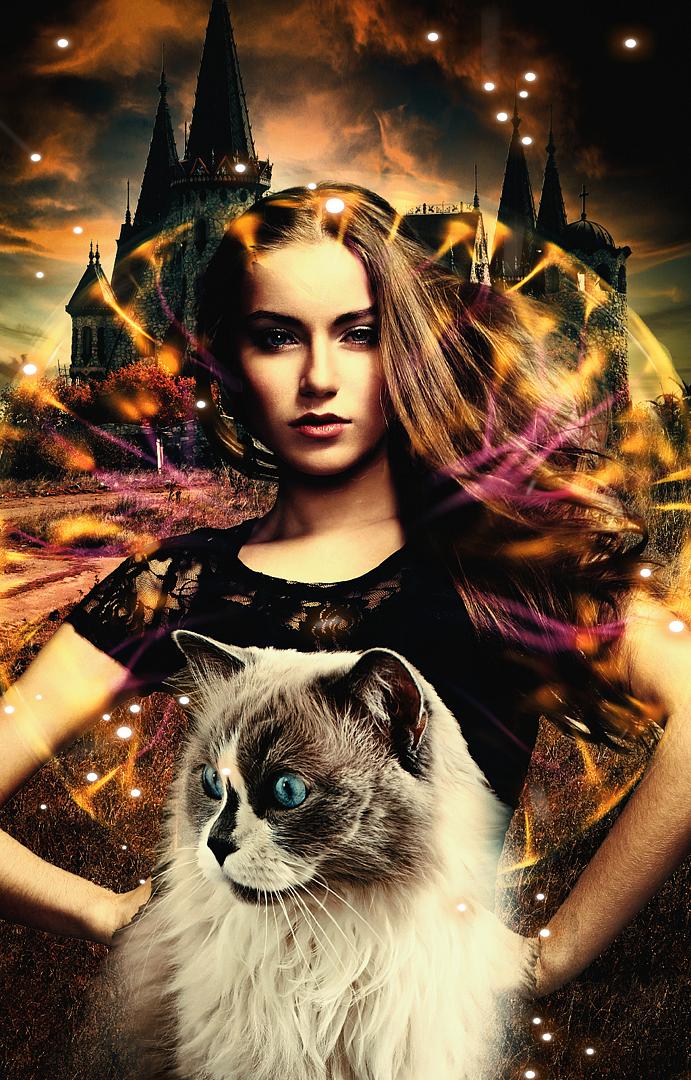 A Legacy for Katherine

Katherine knew she'd inherit the gothic Blackwell Estate when her beloved grandmother died, but she didn't know about the sinister forces she'd inherit along with it. In the neighboring Gauthier Mansion, broody Elias knows more than he's letting on about Katherine's ancestors. After all, strange forces lurk within both their family trees. They may have been regular high school kids yesterday, but now, they're fighting demons...

I’ve never ventured this far into the woods before. The sun is already low in the sky, but my feet keep dragging me further as if I’m trying to escape the devil himself. I can’t seem to stop.

There’s a gnawing need to get away from everything. From home. From life. These woods usually give me some solace, but not today. Not lately.

The ominous cries of the crows reverberate through the forest above the sound of the rustling leaves and the creaking of the tree branches. It serves as a warning for me to stop.

It reminds me that when the sun disappears, I’ll be lost in these woods if I don’t turn back now. I’ll be cold and all alone.

I let my steps falter, and then they come to a complete stop as I take in my dreary surroundings. The fall colors are gone, and the leaves are now mostly rotting on the ground.

Tall trees are looming all around me.

It occurs to me that something isn’t adding up.

A stream cuts through our property that marks the beginning of an overgrown field. Why haven’t I come across the stream yet? Surely, I’ve walked far enough.

My senses become alert, and wariness suddenly sweeps over me as I get the feeling of being watched. The skin across my back and arms breaks into goose bumps.

A snap of a twig makes me jump.

Another snap, and I whirl around.

There are more sounds of snapping twigs before a lithe, tall figure steps out in front of me from behind the trees.

The darkest green eyes framed by a fringe of black lashes on a proud patrician face regard me coolly. I know him. Elias Gauthier.

We may go to the same school, but we don’t run in the same circle. This is probably the first time I’ve come face-to-face with him.

I take a moment to take him in. Tall, broad shoulders. Thick, dark, unruly curls that can only be described as sex hair touch his collar. High cheekbones above the sharp jawline.

I know he’s good-looking, but I’ve never paid him any attention. Until now.

Now we regard each other as if we’re assessing an unknown entity. Friend or foe. At least that’s what it feels like to me.

His haughty expression, the slant of his dark eyebrows, the way his piercing eyes are skimming over me in disdain before settling on my face . . .

It seems as though he already made up his mind about me a long time ago.

“What are you doing here?” I ask when I finally find my voice.

He flashes me the whitest straight teeth. If a smile can be described as ice-cold, his is it. Even so, he’s definitely stunning.

“I should be asking you that question, Duchess. You’re trespassing on private property. My property.”

Am I really on his property now? I don’t normally come anywhere near Gauthier’s property. Both our properties are sizeable enough that most of the time I kinda forget we share a border.

This is definitely the first time I’ve encountered someone in these woods.

More footsteps approach, and I swing my eyes toward three more newcomers. Surprise colors the faces of the other two when they see me. I recognize them too. Tyler Erikson and Justin Feron.

“Well, well, well . . . look who’s decided to grace us with her presence.” Ronan Gauthier, Elias’s twin brother, steps up to stand beside him.

Actually, both Gauthier boy seems at all surprised or pleased to see me.

I always thought Elias and Ronan looked identical. But now I’m paying attention, I can see they’re not. Sure, they look a lot alike, but Elias’s face is narrower.

Ronan keeps his hair shorter too. Both of them look effortlessly elegant even in these surroundings.

Somewhere beyond these acres of woods, I imagine their sprawling mansion.

In fall and winter when the trees are bare, I get a glimpse of their roof and a little of the house from the third floor of our estate.

“Hi, Cat,” says one of their friends. Tyler seems glad to see me. At least there is one friendly face. I think I’ve talked to Tyler once or twice.

“What are you doing out here in the woods?” he asks me. He seems genuinely curious.

I suck my lower lip as I steer my eyes toward the endless trees around me—mostly to avoid Elias’s relentless piercing gaze. I release my lip when I become conscious of what I’m doing.

“I was just going for a walk. I didn’t realize how far I’d walked . . . or that I’d set foot on someone else’s property.”

“You don’t just have one foot in our property, sweetheart. You’re all the way in,” says Elias. He says “sweetheart” mockingly, like an insult. The same way he called me “Duchess.”

“You don’t have to worry about that—I’m leaving!” I tell him, taking a step back. “Sorry for stepping foot . . . or rather, feet, on your property.” I make sure he knows I’m not sorry at all.

He’s still smirking, but his eyes glitter dangerously at the sound of contempt in my voice.

“It’s getting dark. We can’t let her walk home in the woods by herself,” Tyler says, stepping closer to me. I suddenly notice he’s carrying a rifle. All of them are carrying rifles.

Are they out hunting, or are they just practicing?

“Sure we can. She walked here by herself, she can walk home by herself,” says Elias cuttingly. His smile disappeared as soon as Tyler came to my aid.

“If you’re not taking her home, then I will,” says Tyler.

Elias steps in between me and Tyler. He looks like he’s ready to pound anybody who defies him, and Tyler looks conflicted.

“She’s a Blackwell woman. She probably has a broom to ride,” drawls Ronan.

What? Is he calling me a witch now?

Tyler nudges Ronan’s side. “What’s the deal, dude? You guys aren’t usually this rude to a chick.”

“Usually, they don’t want to ruin their chances of getting laid,” jests Justin, laughing like a hyena, but nobody else joins his laughter.

Justin has a reputation for being a loose cannon: rich, spoiled, and reckless. I guess that describes all of them.

“So what? She’s hot. You really don’t want in her pants?” he asks Ronan.

Elias has been watching me the whole time. His dark eyes look so intense and fiery, almost like he hates me.

His sharp square jaw is clenched, and there’s a muscle ticking on his cheek as though he’s grinding his molars together.

Tears prick behind my eyes. “Assholes,” I mutter as I quickly turn and walk away. I don’t care for their crassness, and I don’t understand what Ronan meant by saying I’m for Elias.

But Elias’s attitude and words hurt . . . and I don’t understand why anything he said or did hurt my feelings. Elias doesn’t matter to me. None of them matter to me.

Before I betray myself and show them my feelings—or worse, my tears—I need to put some distance between them and me. Maybe like a whole continent of distance. If only that were possible.

“Oh, so you don’t mind if I hit that?” I hear Justin’s obnoxious voice behind me.

“Come on, let’s get you home.” I’m not sure whether it’s Ronan or Elias who says that, and I don’t care.

“Go to hell,” I snap as I keep walking away.

I hear someone snicker behind me. No doubt they heard me.

I don’t know where I’m going since I’m not familiar with this part of the woods, but I’m not staying near them and taking any more of their insults.

I’d rather crawl through these woods in the darkest night than put myself under their mercy or debt.

“You’re going the wrong way, Duchess. Home is that way.”

I didn’t hear him move, but Elias is right next to me now. I can feel the warmth of his body along one side of mine in the chilly fall evening.

His deep voice slides over me like silk and causes chills to run up and down my spine.

Ugh! I hate him. I want to wipe that cold glint out of his eyes and that cruel smirk right off his gorgeous face.

I follow his direction, but I don’t pause or even look at him to say thank you. I just keep walking.