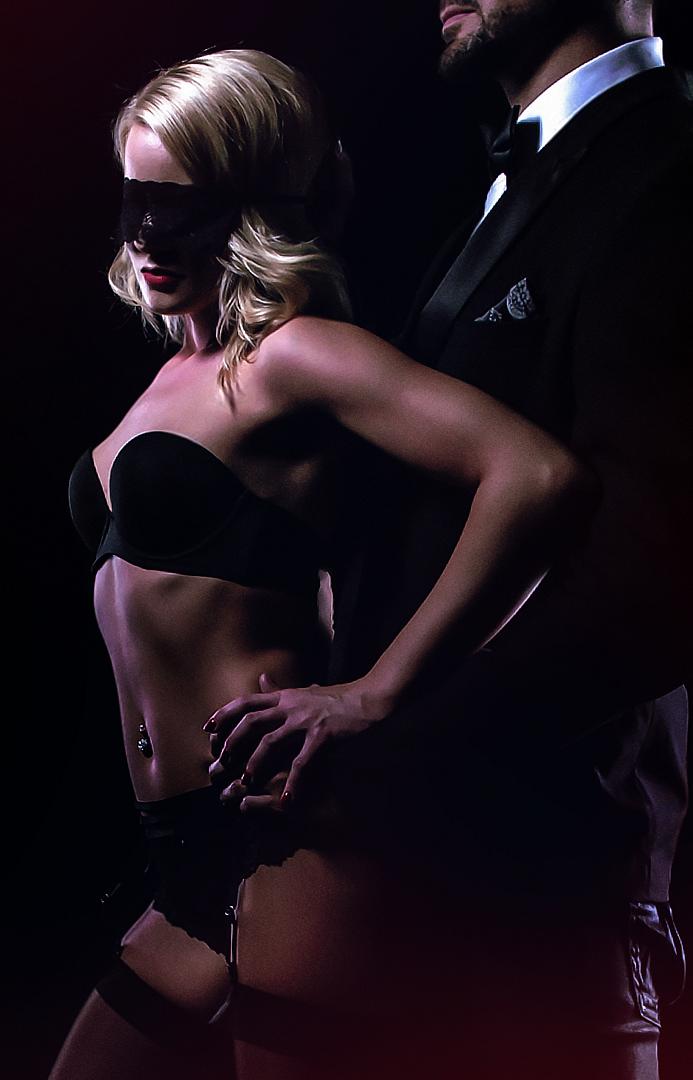 Despite her wide eyes taking in every inch of the bustling club, Anastazja Gajeski doesn’t notice the heated gazes that land on her.

Her heart is beating too fast, her breaths too uneven, for her to acknowledge their interest.

She bites down on her bottom lip and heads straight for the bar. She has a ticket, allowing her only one drink at the bar, and apparently, it’s going to have to be used now.

There’s a band on her wrist that says ‘Taken.’ It’s protecting her from the advances of any Doms in the area and she’s grateful for that.

Ordinarily, she’d love their attention. But this is her first night at this club.

It’s not the first time she’s been to a club like this. She used to visit the one in her hometown before she moved here.

She even scened a couple of times, but without finding the right Dom for her, she mostly stuck to voyeurism.

It’s harder than you think to find the right pairing. Some Doms expect too much of her, others cannot meet her own expectations.

She is the first to admit that she has a specific set of requirements and that she isn’t the perfect sub.

She doesn’t like playing with a lot of different Doms, she’s looking for a long-term relationship, one that can be had outside of the club, too. Not all Doms want that.

She told herself that she’d come tonight to check it out. She chose a ‘taken’ band to take herself off the market and allow her to look around without distractions.

People are in all sorts of different outfits. She chose a modest, short black dress tonight, not wanting to attract attention.

Little does the blonde bombshell realize, not attracting attention is impossible with her beauty.

Her arrival piqued the curiosity of many members when she entered. Her dead-straight, blonde hair falls down to her waist.

Her eyes are hypnotic, icy blue to the point that many people ask if she’s wearing colored contacts. Her skin is pale and creamy, her features angular yet attractive.

She is noticeably of Eastern European descent, which only adds to her beauty.

Anastazja finishes her drink and quickly pulls out her phone to message her sister. She sends a brief text, cursing her for pushing her into doing this.

She takes deep, calming breaths and tells herself it will be easier the next time she comes. She’s only this nervous because it is her first time.

Anastazja slides off the stool and decides to watch some demonstrations. They will take her mind off how new and nervous she feels.

A couple of Doms nod hello at her as she wanders around the room. She smiles politely back but makes no other moves to show interest.

There are a couple of demonstrations on. A man is flogging his male sub, who seems to be enjoying the ‘punishment’ far too much.

She subtly giggles at his predicament and moves on to the next demo. As she loses herself in the performance of two Doms teasing an obedient sub, she is unaware of a fresh set of eyes on her.

Ace Jackson thought this would just be another shift. As a dungeon monitor, it is his job to protect the clients of the club and ensure that everyone is scening safely.

There are eight DMs on the lower floor and another five upstairs. They take it in turns to observe the different areas.

Currently, he’s got the easiest job. He’s to stand near the demonstrations and ensure they are running smoothly. In half an hour, the DMs will switch, and he will move outside to the patio.

Ace watches the demo more closely than he needs to. He is meant to step in if things go wrong, or if he senses a sub is at risk of harm they did not consent to.

However, he listens to what the Doms are saying, enjoying their interactions with their subs.

He misses scening. It’s been a long time since he last scened. Too long.

Until she decided that it was fun to experiment at college, but now they had graduated, she wanted a vanilla relationship.

Once single and at the club, things got out of hand. Subs were throwing themselves at him, desperate to scene with the man that had been off the market for the two years he’d been a member.

Despite being flattered at first, he found he was getting sick of the constant requests. Any time that he tried to form a relationship with a sub, they never had any connection outside of the club.

All of the dates he went on failed miserably. There would be chemistry during a scene, but put them in normal clothes, in a restaurant, and the spark would disappear.

He found himself reluctant to put out during a scene. Sex made things messy, feelings got involved and inevitably both Ace and sub were disappointed.

After a year of failed attempts, he gave up on the scening side of things. He occasionally helps out for demos, mostly when another Dom needs guidance or support.

The blonde pocket-rocket that saunters up to the demonstration has that plan going out of the window. Ace’s eyes leave the scene, and he slowly treats himself to an eyeful of the delicate sub.

The black stilettos add inches to her height, but he estimates she’s around 5’4/5 without them. Her petite body is hugged by a tight black dress. It’s short enough that it shows a lot of leg and clings to her curvy ass.

Her breasts look just the right size for his hands and Ace involuntarily curls his fingers into fists, in response to needing to touch her.

Her hair makes him want to wrap it around his hands so he can hold her exactly where he wants her. The ends teasingly brush over her round butt as she walks.

Ace notices how the little sub has attracted the attention of nearby Doms. He feels uneasy by the feeling of annoyance that fills him, knowing that other people are looking at her lustfully.

He shakes his head and returns his gaze to the demo. He reprimands himself, reminding himself that he needs to focus. These subs are trusting him to step in if things go too far; he cannot betray that trust.

But try as he might, his eyes trail over to the blonde throughout the demo. Her expressive face shows everything she’s feeling.

Pure desire as she watches the Doms take their sub at the same time, empathy when the sub is paddled and a small smile when the Doms help the sub to stand up on her shaky legs at the end.

Ace has never been one to go for conventional beauty or vain types. He likes women with raw beauty, the kind that is a combination of both looks and personality. He can tell instantly that this sub has both.

She turns to move on and catches his gaze. Time stands still for a brief moment, as for just a few seconds, their eyes lock and their hearts beat at exactly the same time.

Her cheeks warm and the sub breaks her gaze before turning away. She reaches up to brush back her hair from her face and Ace catches sight of the ‘taken’ band on her wrist.

Disappointment rushes through him. It’s like a sucker-punch to the gut.

She’s not available. Typical, she’s too alluring to have not been snapped up already.

He forces his gaze back to the demos and tries to shake the feeling of sadness that grips him.

For almost an hour, I cannot get my mind off the DM by the demonstrations. Our eyes only met for a second, but that second was hotter than every minute of sexy time I had with my ex-boyfriend.

It was like the sexual attraction fizzled and cracked in the air around me.

I have no idea if the DM felt it too, but the heated look he gave me certainly indicates that he did.

He’s a DM, which is irritating. There’s no chance of scening with him. I wouldn’t tonight anyway, as it’s my first night, but I hope that he comes as a member as well as staff sometimes.

I watch some more demos and find myself frustrated with being unable to get my mind off the hot DM. He’s gorgeous in comparison to everyone else here, but in comparison to the public outside, he’s a god.

I don’t think I’ve ever seen someone so beautiful that it made me stop in my tracks before. His hair is a rich chocolate color. Long enough that it’s tousled but undercut and still short enough that it doesn’t drop into his eyes.

I can see their color a mile off. A mixture of grey and green, like a shade of sage. His face is that of a model or Adonis.

Strong, aristocratic nose pronounced cheekbones and plump lips. His tan, darker than anything I could dream of, sparked jealousy in me instantly.

He is wearing the same outfit as the other DMs, a black shirt and slacks. His shirt must be tailored for him, as it hugs every inch of muscle perfectly.

A white band with ‘DM’ printed on it is wrapped around both biceps.

Cursing myself under my breath, I check my phone. One missed call from Agnieszka, my sister.

Phones are not supposed to be used in the main area; they can make other members uncomfortable; they might think you’re filming them.

I head outside, where there is a phone zone. I press my sister’s number and listen to the dial tone; she picks up after two rings.

In fast-spoken Polish, she excitedly explains how she got the job she interviewed for a week ago. I congratulate her, feeling excitement for her.

She has wanted a new job for so long and we were both worried she hadn’t got it after a week of silence.

I pace up and down the flagstones, listening to her gush with happiness. With the promise of speaking again tomorrow, we say our goodbyes.

I hang up and put my phone in my bag. I turn around and freeze in surprise when I see the DM standing on guard by the patio doors.

He’s watching me with desire in his eyes. It’s impossible to miss, even to my insecure ass.