For nine long years Katie has been held captive by her father, a sadistic rogue alpha. Just as she’s ready to give up on life, she manages to escape, only to be captured by the Blood Moon Pack and their alpha, Kane. Expecting to be killed or worse, Katie is shocked to discover a welcoming pack. Unfortunately, her father follows her—along with some dark secrets from her past! 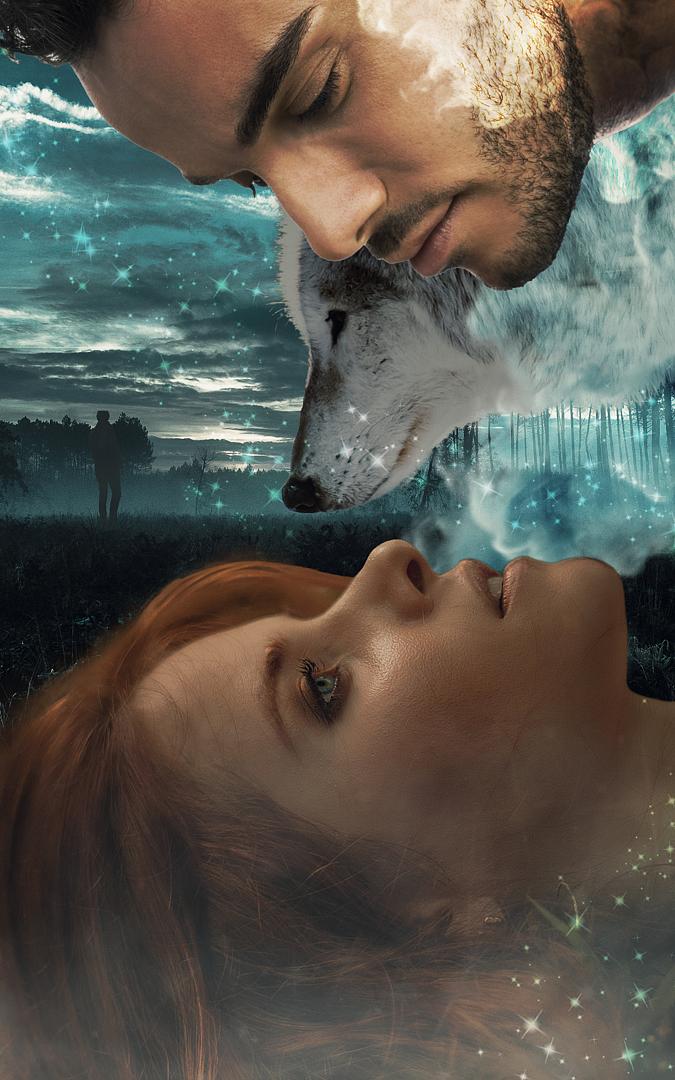 For nine long years Katie has been held captive by her father, a sadistic rogue alpha. Just as she’s ready to give up on life, she manages to escape, only to be captured by the Blood Moon Pack and their alpha, Kane. Expecting to be killed or worse, Katie is shocked to discover a welcoming pack. Unfortunately, her father follows her—along with some dark secrets from her past!

I pulled my beanie hat down over my ears, hiding my red hair beneath it.

I turned up the collar of my jacket in an attempt to keep warm. I shoved my hands into my jeans pockets, feeling around for the change inside.

As I walked into the fast food place, I only had one thing on my mind: a cheeseburger, and maybe to keep warm for a little longer.

It was January, and whilst there was no snow, the temperatures had plummeted.

I was glad there was no queue as I walked up to the counter. I glanced around quickly, glad that no one had noticed me. No one except the boy behind the counter.

He stared at me with fear in his eyes. I could smell it, too, above the lingering smell of greasy burgers that permeated the air.

“You shouldn’t be here!” he hissed.

He looked around behind me at the empty tables.

“You realize you’re in Blood Moon territory,” he whispered, a tremor in his voice.

I glared at him. “You won’t get any if you give me a fucking cheeseburger!” I growled.

He quickly grabbed a burger that was sitting under the grill and put a slice of cheese on top. Once it had melted, he chucked it in a bun and placed the contents into a polystyrene box.

He rolled his eyes and opened the box. He quickly lifted the roll and chucked some onions on top. Closing the box, he shoved it across the counter.

I grabbed it and turned to walk away.

I turned and sneered at him, “It ain’t your lucky day, is it, alpha boy.”

I could smell his scent. He was clearly the pup of an alpha.

I hesitated for a few seconds, seeing if he intended to press the matter. He didn’t. I knew he wouldn’t, the cowardly bastard.

Pack werewolves only ever wanted to fight if they knew they outnumbered you. Rogues, on the other hand, wouldn’t take any shit.

There weren’t many benefits of being the daughter of Mason Ridgeway, but scaring arsey pack pups was one of them.

He’d known who I was as soon as I walked in the door. I’d tried hard to disguise it, as my father always insisted. Luckily, he was the only werewolf around.

I’d still be in the shit, though, for a couple of reasons.

One, I wasn’t supposed to leave the house where we were currently holed up. Two, the snot-nosed pup would likely tell his alpha daddy.

I munched on the burger as I headed back to the house. The streets were quiet, and I wasn’t being followed. Once I’d finished the food, I tossed the container away.

Reaching the house, I shoved the door open and walked in.

My father glared at me with his deep blue eyes. His dark brown hair looked dishevelled. We weren’t really much alike, apart from maybe our tempers.

“Where the fucking hell have you been?” he growled at me.

I headed toward one of the rooms, which was where I usually slept.

I didn’t even reach the door before he grabbed me, spun me around, and backhanded me across the face.

The force of the blow sent me hurtling to the floor.

“I told you not to leave this house!” he growled, his eyes flashing black momentarily.

I put my finger to my lip and wiped the blood away that had started to run from the split he had made.

I glared at him. “And I told you I was hungry!” I hissed.

I never found it easy to back down. I always had a smart-mouthed answer. I always suffered for it. Today was no exception.

Before I could even blink, he grabbed me by the throat and slammed my back against the wall. Then he yanked my hat off and threw it to the floor.

My long red hair, which had been tucked up inside, tumbled around my shoulders.

He let go of my throat and grabbed my hair, viciously yanking my head back. It felt like a thousand needles were jabbing in my skull. I refused to cry or make a sound, though.

I knew better than to struggle; the more I struggled, the worse it would be.

His eyes narrowed as he stared at me. My nostrils flared angrily and my breathing became faster.

I felt my heart pounding in my chest. He would smell my fear, and that would probably make things worse.

He held up his other hand, and I flinched slightly.

He smirked at me. He was a sadistic bastard, even to his own daughter.

Claws erupted from his fingers as his eyes turned completely black.

I whimpered as he dragged a claw slowly across my throat, enough for me to feel it without breaking the skin.

Then he dragged it slowly across my cheek, deeper this time. Pain erupted on my face, and I felt blood start to seep out of the cut he had made.

I felt bile rise in my throat, but I swallowed it back down.

He smirked and let me go.

I knew exactly what he meant. He didn’t mean that I would turn into a beautiful and sensitive young woman, which my mother had been. My red hair mirrored her own, as did my hazel eyes.

He meant I would end up dead.

He’d made me watch when he killed her. She’d had enough of being a rogue. She’d found a pack that would take her and me.

One of the other rogues held me fast, forcing me to watch as my father’s clawed hands plunged into her chest and pulled out her still-beating heart.

That was three years ago. I was only fourteen then. I still sometimes had nightmares, especially when my father threatened me with the same fate.

Before he killed her, I had been a normal young girl. Despite never having a permanent home, my mother tried to give me some sort of stability.

That all changed when he killed her. I became a hard-faced rogue. Even when he hit me, or worse, I never cried, not anymore.

The sweet young girl was buried deep inside, never to emerge again.

Being weak got you nowhere. I had heard my mother begging my father, saying how sorry she was. What good did it do her?

As I walked toward the bedroom, I heard Terence, one of the rogues that ran with my father, snigger.

“I’ll teach her some manners!” He smirked.

A shiver ran down my spine; I knew that Terence was a sick pervert. The way he looked at me sometimes made me want to vomit.

“Lay one finger on my daughter and I’ll rip your heart out, just like I did her mother,” my father growled.

I smelt Terence’s fear as I entered the room, and then I heard my father’s voice, this time directed at me.

“Make yourself scarce tonight. I’m having a meeting!”

Meetings only meant one thing, a group of male, testosterone-filled rogues getting drunk. Not a good combination when you’re an unmated female.

It also meant that he was going on another killing spree.

I couldn’t believe he would do this here. The Blood Moon Pack was the strongest in the country.

Rogues didn’t care about that, though; they just attacked with impunity.

Maybe I was like my mother. Even though I’d been born a rogue, I didn’t understand why they needed to kill like that.

It was pointless. It never really achieved anything other than to piss off the other alphas. I never expressed these views; if I did, my father would probably kill me without a thought.

I looked around the makeshift bedroom. It was actually more of a storeroom that a mattress had been chucked into. I didn’t mind too much; at least it gave me a little privacy.

I took off my coat and folded it up to use as a pillow. Then I settled myself down on the mattress. I cautiously touched my face.

Despite being a werewolf, I didn’t seem to heal as quickly as the others. Maybe it was because they were adults. They never seemed to scar, either, but I did.

It didn’t seem to stop him being a sadistic bastard. He would often inflict pain on me if he thought I’d crossed the line.

I never cried now, not even in private. Crying was a weakness my father didn’t tolerate. The last time I did was when he killed my mother.

He had sneered and called me weak and pathetic. He’d said he would soon toughen me up. I suppose he had.

My mother had told me he wasn’t always like this. I wasn’t sure. It seemed like all alphas were the same.

My father had been an alpha of a pack until another alpha had decided he wanted the territory for himself.

When the alpha killed my father’s mate, his luna, he escaped with a few warriors, swearing revenge. He apparently met my mother soon after.

He took my mother to his bed in an attempt to soothe his rage. When she found she was pregnant, she stayed with him. Perhaps my life would have been different if she hadn’t.

I knew my mother had loved me. I sometimes questioned whether my father did, but then, he wouldn’t have gone to such lengths to get us both back.

I’m sure he was disappointed when I was a girl. He probably would have loved me more if I’d been a boy.

I heard raucous laughter from the next room, my father’s and that of some other men. I guessed I wouldn’t get much sleep tonight.

I was right about that, although not in the way that I thought. A couple of hours after the other rogues arrived, my father opened the bedroom door.

“You stay here,” he growled. “We’ll be back later.” He hesitated. “If you go out while I’m gone, you know what will happen!” he threatened.

I nodded my head, but I should have known that wasn’t good enough.

He leant over, the smell of alcohol on his breath. He grabbed my face roughly.

He stood up and grunted.

A short while later I heard the outer door slam.

I slowly opened the door and peered out. The rest of the house was empty, but the living area looked like a bomb had hit it.

There were empty pizza boxes, along with empty bottles. The bottles had contained various types of alcohol. They had been tossed on the floor. Some of these people really were animals.

I walked into the kitchen, found a cleanish tea towel, and soaked it with some water. I cleaned the cut on my face as best as I could.

I figured I might as well try and get some sleep, so I headed back to the makeshift bedroom. I lay down on the mattress. Closing my eyes, I slowly slipped into a light sleep.