Penelope is human, but after being raised by a werewolf Alpha...well, let's just say she's different from other humans. She also carries the mark of the Huntress, which gives her special abilities. Still, Penelope never dreamed that her powers would have any effect on the Alpha King, Sirius, who hates all humans—or that there would be a bond between them. What will Sirius do when he finds out that his destined mate is human? Will he choose hate...or love? 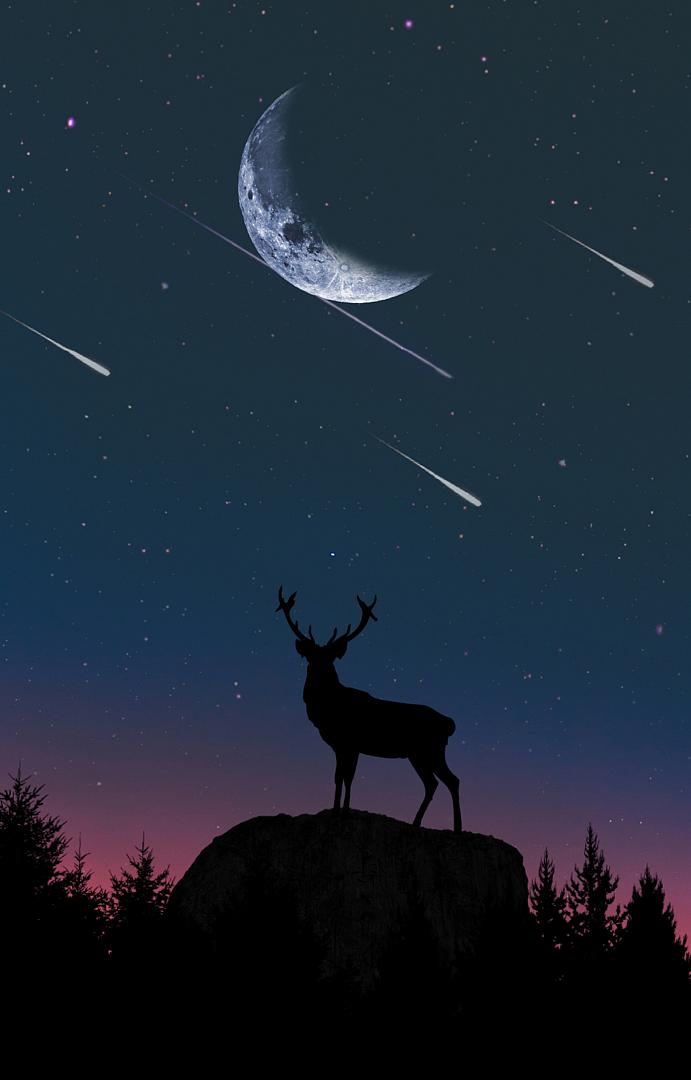 Penelope is human, but after being raised by a werewolf Alpha...well, let's just say she's different from other humans. She also carries the mark of the Huntress, which gives her special abilities. Still, Penelope never dreamed that her powers would have any effect on the Alpha King, Sirius, who hates all humans—or that there would be a bond between them. What will Sirius do when he finds out that his destined mate is human? Will he choose hate...or love?

When Artemis marks a daughter with her touch, the child’s life is changed forever, and she must eventually make a choice: join the Hunt with her sisters or find a mate powerful enough to take her and mark her as his own.

I didn’t dare touch him at first. Then I heard him grunt.

His bedroom was dark. When I’d first come in, I’d thought he was deep asleep. But as I scooted closer to his bed, I saw that his boxer shorts were tight and he was twitching. He was having a wet dream about me?

I didn’t want to leave him hanging, though, so I kissed him softly to wake him up.

I felt him wake up suddenly, and he kissed me back with force. He pushed me down underneath him on the mattress. His front pressed against mine, making me moan.

He growled above me and kissed down my neck before nibbling the base softly. I gasped at the feeling.

He growled at my gasp, and I sucked in air as his eyes changed to the golden color of his wolf. I cupped his face and brought his lips crashing onto mine.

I kissed him with all I had, and he gave it back.

Our tongues wrestled in our mouths, making me moan against his lips. I had never been kissed like that before, and I knew no other could make me feel like this.

He helped me out of my shirt before kissing every part of me. He went down to the seam of my bra and licked the skin of my breast, making me moan.

He unclipped my bra with expert hands before putting my erect nipple in his mouth while he played with the other, using his thumb and index finger to rub and pinch it.

Oh Goddess… He was so good at this. I cried out under his touch, and I felt my lower parts become wet and tight. I wouldn’t last long if he kept assaulting me like this.

And then, suddenly, he released my nipple, bringing goosebumps up and down my skin. He looked up at me. Why did he stop?

“Before I go further, I have to be sure.” His voice was husky. “Have you made your choice, Penelope?”

I was in the forest to draw the wildflowers in bloom. I loved to draw. It was my passion. It was also a means to express my feelings and enjoy the quiet.

I wasn’t an introvert per se, but I enjoyed being on my own.

Thankfully, I had brought everything I needed to do them justice. I took out my pencils and my crayons and got to work.

I was so absorbed in my sketch that I almost didn’t hear the sound of paws on the forest floor. A wolf came up behind me, and I turned to smile at him.

It was a sandy-blond wolf that I recognized as my best friend, Kyle. We had been inseparable since we were little, even though he was a wolf, like the rest of our pack, and I was just a human.

The alpha of the pack had adopted me when I was just a baby and raised me like one of them because, according to him, I was blessed by Lady Artemis.

I had a tattoo on my arm: a stag gazing toward a crescent moon, and according to my father, it was the touch of the Goddess of The Hunt herself.

Thanks to this mark, I could mind-link with the wolves and call all lycanthropes to me, possibly even lions and tigers and other beasts. But I’d never tried that.

I only called my brother and Kyle, and only then when I was in danger.

“What is it, Kyle?” I asked the wolf behind me, but I was still sketching.

“Alpha Richard is asking for you. He has some big news.”

I turned my light-green eyes to his yellow ones. This was unexpected. What did my dad want?

“What kind of news?” I asked, curious.

“I don’t know. But it seems important.”

My father’s hazel eyes were stern. The moment he was done speaking, he went back to pacing in front of the roaring fire, his brow furrowed.

I shared a look with Kyle, who was standing next to me in the Alpha’s office.

This wasn’t normal. King Sirius never came to visit our pack, with its creaky old farmhouse and aging Alpha.

The Alpha King of the werewolves was actually a lycan. They were bigger and stronger than wolves with a form of half-beast, half-man.

“Why?” It was my brother Jacob who asked the question. He was tall and muscular, with brown eyes and hair that was the desire of every unmated she-wolf in the tribe. Not that any of them would ever be good enough for him.

He was staring curiously at our father.

Alpha Richard didn’t answer. Which wasn’t normal. He always answered Jacob, the future Alpha. Instead, he turned to me.

“The Alpha King dislikes humans. He saw it as a bad sign when I took you in.”

“Oh.” I couldn’t think what else to say. Did this mean he was coming to…?

“Don’t worry, Penelope. He’s not coming because of you,” my father said as if reading my thoughts.

“Why is he coming, then?” asked Jacob again. He was looking at me, worried. He was very protective of me, so I shouldn’t be surprised that a human-hating king staying on our lands would scare him.

Our father gave him a long look before answering, as if deciding how much to tell. “There will be time to learn all that later,” he answered finally.

“Should I…stay away while he’s here?” I asked, uncertain.

My father shook his head. “Go to college as usual and don’t change your plans. You’re my daughter, and this pack is your home.”

I smiled at him, and he smiled back. I knew he always had my back, but I’d still try to stay well away from the king. That would be best for everyone.

Whoooosh! A car zipped by me and I flinched. It missed me by inches, even though I was on the sidewalk.

It was the next evening, and I was walking home from college alone. Usually, Kyle would come with me, but he was home to greet the king.

My father had organized a party for him and his royal pack. I hoped they’d like it.

That was the second car to almost hit me tonight. I decided to cut off the busy street and into the forest, using a shortcut I knew. I liked walking in the trees. The crunch of the leaves. The rustling of the branches.

The moon was casting enough light so I could see my path. The stars were also out, and that almost made me want to draw the scenery. But I was expected home, and I couldn’t delay more.

I was almost back on pack lands when I felt a presence behind my back. Who could that be? I strained my ears to hear a sound, but I couldn’t hear anything over my own leaf-crunching.

It was no wolf because they’d always make their presence known to me since I couldn’t use my sense of smell like them.

I tried to mind-link with the thing but didn’t feel the warm embrace that happened whenever I mind-linked a wolf. Instead, I felt an icy cold come into my mind.

I felt panic surge through me, and I hastened my step. Our pack’s border was marked by sycamore trees, and I just had to pass it to be safe.

I could use my power to call for help, but I didn’t want to do that unless I was really in danger.

I wanted to run, but what if that made the thing behind me attack? I picked up the pace again.

I could just barely hear it now, moving quietly along the path behind me. It was stealthy, almost inaudible. No human or wolf made such little noise.

I couldn’t stop myself. I broke into a run.

I heard the thing speed up too.

There was nothing for it. I shot my power out, hoping it would find Jacob.

Then the icy cold hands closed around my throat.

I felt frigid breath against my cheek.

Saw a flash of fangs. And, in a thrill of terror, I knew what the thing was. Something I’d only read about in books. The sworn enemy of wolves and humans alike.

I was caught in the grips of a vampire.