RJ Macillister lives to make her alpha father proud. She’s a strong fighter and stellar student, ready to lead the family’s tech company and become alpha. Weakness is never an option. But weak is how she feels when she lays eyes on a blind date. Will his good looks and blue eyes be her undoing? 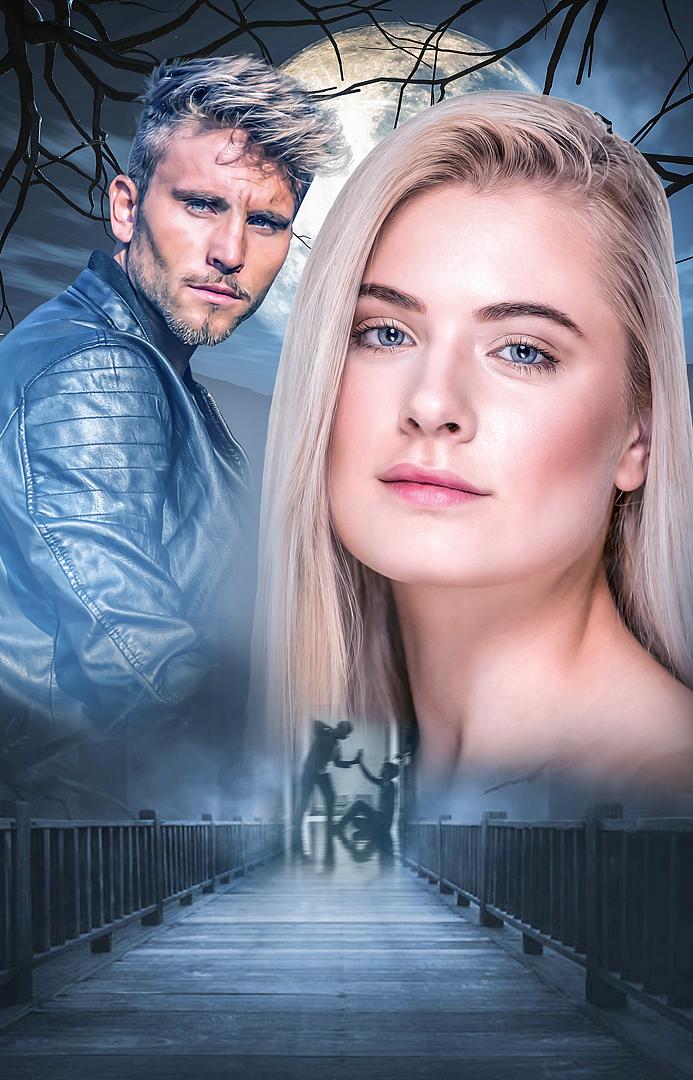 RJ Macillister lives to make her alpha father proud. She’s a strong fighter and stellar student, ready to lead the family’s tech company and become alpha. Weakness is never an option. But weak is how she feels when she lays eyes on a blind date. Will his good looks and blue eyes be her undoing?

It was 6 a.m., and R.J. had been up for two hours in the biting cold according to her father’s strict regimen, which he’d had her on since she was eighteen.

At four, he started her on a ten-mile run around the perimeter of the pack grounds, five miles in wolf-human form, then shifting into her wolf form for the other half.

After the run were laps in the private man-made lake.

As former alpha of Black Heart Pack, Raymond Macallister believed that strength in both mind and body, along with great leadership, made an outstanding alpha.

As he stood before his twenty-four-year-old daughter, he watched as she fought his four best warriors till either she or all four men were down for the count.

Raymond had never believed in mock fights because, in battles or attacks, their enemies wouldn’t allow their victims to go free after a little scratch.

“Focus, R.J. What the fuck are you doing?” he shouted at her as she allowed herself to be attacked from behind.

The wolf pinned her down, clawing at her arm as a sign of his dominance over her.

R.J. gave a quick look at her father and saw the disapproval in his eyes that had been there since she was sixteen. Pushing the wolf off, she resumed her training, wincing as she moved her arm.

“Sorry, Alpha,” the wolf apologized with regret in his voice.

“Gotta learn, right?” she replied, sending him a reassuring smile.

“What was that? Are you smiling at your attacker? You think a smile is gonna disarm him?” her father shouted once more.

The condescending tone in his voice made her confidence drop. She visibly flinched as he took a step toward her. “D-Dad, it was… I was…,” she started.

“Wasn’t thinking. Get back to work. You have thirty minutes left, and I want all four wolves down.”

“Yes, Dad,” she replied weakly and got back into position.

R.J. didn’t succeed in doing what her father had ordered, which resulted in his criticizing her harshly before her own men.

She kept her head held high, eyes emotionless and body stiff as he threw everything she’d done wrong in her face.

Over the years, she’d learned to block him out and not let his words get to her. If she shed a tear, more harsh words would come.

To him, his only daughter would never be as great an alpha as he had been. Raymond saw himself as the best, while most saw him as a tyrant.

Winding down his speech, he came and stood before her. His emerald-green eyes met her blue-gray eyes, which were much like her dear mother’s.

“Tonight at eight, you will have dinner with Alpha Sean’s son. Don’t embarrass me.” That was all he said before stalking off.

R.J. stood, staring off into the distance. The only sounds that could be heard were her heartbeat and the shifting of bones as wolves returned to men.

“Get the kit, Jesse,” one man ordered as he approached his dear alpha. Gently, he moved the strap of her sports bra to assess the damage done to her arm by his brother, Mark.

“It’s healing quickly, but I’ll still clean it and cover it up,” he said softly.

Jesse came up with the first aid kit and looked her over to see if any more damage had been done to her body.

All four men surrounded her and protected her while they tended to her wounds. She said nothing, and they said nothing.

They’d grown up with R.J.; they’d gone to the same school and the same birthday parties, and they’d had dinner at each other’s houses.

As purebred wolves, their training was rigorous, and they always had to strive for the best, but it was different for her. She had to be the best. The alpha’s children had to be above them all.

“Charlie has chosen your work clothes already. I’ll be out front waiting for you. Jesse and Mark will accompany you to dinner,” Ryan explained as he finished taping the gauze in place.

Frankie, the quietest of them all, called out to her. Stiffly, she turned to him, and her eyes softened as he gave her a small smile.

“It’s all right. You’re doing great. We all love you as our alpha. He may not see it, but Black Heart loves you just the way you are,” he said, pulling her into his arms.

Kissing her on her temple, he rubbed her back, wanting her to relax before she got ready for work. Each man kissed her cheek before leading her back to her house.

As they stepped out of the trees into her large backyard, she softly thanked them before going into the one place she felt safe and where she could be herself.

Her best friend, Charlotte, was in the kitchen, waiting for her with a warm smile on her face. A hot cup of coffee and breakfast were on the countertop.

Watching her friend, who was more like a sister, as she ate her breakfast quickly, Charlotte said, “Date, huh? Haven’t been on one of those since you were what, sixteen?”

R.J. gave a quick glance at her blonde friend and kept her head down. “Guess you don’t count the last eight alphas’ sons in the past year,” she teased with a small smile on her lips.

Charlotte seemed pleased by the little effort she made to show her once-playful nature. “Psh. Those were practice; maybe this son will be the one you waited for,” she said with a bright smile.

R.J. shrugged. She wasn’t getting her hopes up; neither was her wolf, Kara. If one of these arranged dates turned out to be her mate, she would no longer be the dominant leader of Black Heart.

Her father and his friends were all alike. A luna wasn’t their equal; she would be below them and would have no say in whatever problems the pack faced.

“Yeah, maybe he is,” R.J. returned with a smile. “C’mon, time for work. Ry will be outside waiting.”

Dressed in a black pencil skirt ending above her knee, a gold chiffon halter top, a cropped jacket, and black-and-gold pumps, R.J. stood before her floor-to-ceiling mirror, practicing her smiles.

“A smile can change anyone’s day, even your own.” The words her mother had recited to her before every pack gathering had stayed with her all these years.

“When will one change my day?” she asked herself before heading downstairs.

Charlotte waited for her by the door. As she noticed R.J., she proceeded out the door to the waiting car.

They sat in the back with the radio on, listening to whatever tunes it belted out. R.J. took in the view as they drove through the neighborhood on the main road that led to the highway.

Since Ryan knew the shortcuts to the city, they weren’t surprised when they reached the parking lot of Robinson Tech.

Besides her own home, work was a temporary safe haven.

The company had once been her maternal grandfather’s. It had started off making and distributing computer parts for major brands, then made a transition to video game console parts.

Her Uncle Sebastian had branched off into game production. He was the one who’d taught her everything there was to know.

Both father and son had planned ahead by assembling a team for advertising, designing, marketing, and testing.

Robinson Tech had made a name for itself over the years and was now known as the go-to company to get your name known.

Whether it was a new game for mobile devices or consoles, they could make it happen.

Her father had never believed that R.J. should be handed the company. He’d said, “She will burn it to the ground.”

Three years later, she’d proved him wrong when her grandfather gave up the reins willingly.

Sebastian helped out from time to time whenever he was stateside, but he preferred to stay in Japan, where the magic really happened.

She’d wanted to follow him upon his request, but circumstances had prevented it, and she was left to handle it all.

“Good morning, R.J. We have a great day ahead today,” Tiffany, her assistant, said, going into her morning rundown as she stepped into the colorful lobby

“Two of your clients’ games are completed and ready to be tested. I’ve already notified them. Two focus groups have been assembled, and they’ll all be here at nine.

“At eleven-thirty, you have four new client meetings, one console, and three apps.”

On monitors were new game advertisements and images from the designers’ portfolios. The walls were orange, blue, red, and purple. Framed pictures of hit games decorated the walls.

In the seating area were modern white couches with character throw pillows, and people milled about in their own style of dress.

There wasn’t a strict dress code. Comfort was the main goal since every department frequently worked long hours, and heels and suits could be a hassle.

Charlotte waved goodbye to her friend as her own assistant led her up to her department: design.

If it weren’t for R.J.’s great eye and leadership, the developers would have been lost. In her office on the top floor, she sat and stared out the window, thinking about her date later that day.

“Do you think this one will be our mate?” she asked her wolf.

Kara huffed at the question and found calm in the view her human was showing her. “I really can’t say,” Kara replied.