Birth of a Baby Daddy

If you're having fun living your bachelor life in your Alaskan hometown and out of nowhere a woman shows up holding a baby she insists is yours, you need a plan-a birth plan.

BP Step #3 - Try to remember the woman and with any luck, her name.

BP Step #4 - Double check that she's not confusing you with your twin brother.

There's only one thing you shouldn't do.

BP Step #6 - Don't assume she's there because she wants your daughter to call you Daddy. You'll only end up disappointed.

Time to figure out a new plan-one that changes her mind. 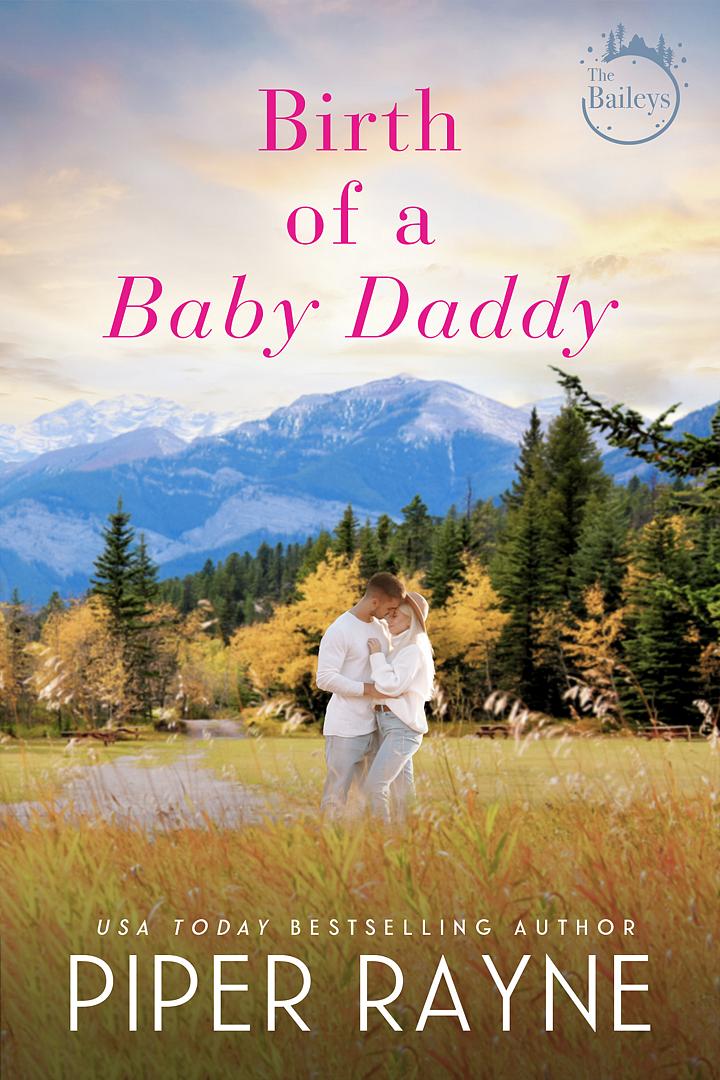 Birth of a Baby Daddy

If you're having fun living your bachelor life in your Alaskan hometown and out of nowhere a woman shows up holding a baby she insists is yours, you need a plan-a birth plan.

BP Step #3 - Try to remember the woman and with any luck, her name.

BP Step #4 - Double check that she's not confusing you with your twin brother.

There's only one thing you shouldn't do.

BP Step #6 - Don't assume she's there because she wants your daughter to call you Daddy. You'll only end up disappointed.

Time to figure out a new plan-one that changes her mind.

Book 3 in the Baileys Series

I hoist Calista higher on my hip while our suitcase bumps along the half-melted ice as I drag it up the quaint path that leads to the front door of Cozy Cottage Bed and Breakfast.

This is the cheapest place to stay in Lake Starlight. The place doesn’t look as rundown as I expected. It actually looks well cared for, but a little…peculiar.

I’m not a judgmental person—not with my own past being what it is—but most people wouldn’t match pink siding with yellow trim.

The plethora of garden gnomes and metal sculptures poking out from the clumps of snow around the yard ramp up the weird factor.

I don’t remember them from the online pictures when I booked, but it wouldn’t have made a difference.

I’m here for one reason and one reason only—to track down my baby daddy.

God, that sounds so cliché, but it’s true.

I had no intention of seeking him out.

It wasn’t until his picture was plastered all over the news when a plane went missing in Alaska carrying a famous Hollywood music producer inside that I knew where I could find him.

Denver was the pilot and that was when I learned his last name.

But now six months later, here I am in his hometown. Only because I need something from him.

Calista’s fussing draws me from my thoughts, and I stop to readjust her. I don’t have a chance to knock before the door whips open revealing a waiting woman.

She’s middle-aged, maybe mid-fifties, wearing a colorful dashiki with black leggings. Her shoulder-length black and gray hair sticks out from under the scarf wrapped around her head.

She frantically waves with dried paint-covered hands. The neon pink color of the paint is set off by her dark skin.

“Heeelllooo,” she draws out the word with a huge smile on her face. “You must be Harley!”

She steps onto the porch and wraps both my daughter and me in an embrace. My back stiffens and I let out a breath of relief when she pulls away, directing her attention to Calista.

She scoops up Calista and my arms instinctively reach out to grab her back, but the woman pulls her securely into her chest. I open my mouth to say something, but she beats me to the punch again.

“Bring your suitcase in. You’ll catch your death out here. It’s not too spring-like yet.” She turns and heads into the house with my daughter. “Is this your first time in Alaska? How was your flight?

“What brings you here? I’m Selene, by the way, like the Greek goddess of the moon.”

My brain stutters to keep up with her rambling. I have no idea which question to respond to, so instead I drag my suitcase through the door and close it.

I peek around what will be our home for the next few days. The inside is just as colorful as the outside.

Bright abstract oil paintings cover the walls and trinkets decorate every available surface which will be a nightmare now that Calista puts everything into her mouth.

“Did you paint all these?” I ask Selene who’s busy tickling Calista under her chin, but Calista isn’t giggling. She’s staring at her like she just stepped off a UFO.

“I did. I’m not only a patron of the arts, but I’m an artist myself. Made all the lawn decorations you saw outside, too.”

An awkward silence hangs over the room and I use the moment to get another word in before Selene starts up again.

“It was a long day of travel, so I think we’re just going to go lie down for a bit before we head out to get a couple things done.”

Selene frowns. “I can keep her with me if you want to rest.”

She seems genuine, not like a crazy murderer who will hurt my daughter but I’m not about to leave my infant daughter with someone I don’t know.

“That’s okay, she’s due for a nap, too.” I reach out to take her from Selene. “I think we’ll just go lie down and I’ll grab my bag and unpack if that’s okay?”

“Of course. No problem at all. Dinner is at five. Is that too early for you? I’m an early riser which means early to bed, but I know some people prefer to eat late.”

Calista whines because at this point, we’re way past nap time, so I bounce her on my hip hoping to speed this conversation along.

I worried about staying at a bed and breakfast instead of a hotel because of the nosiness from owners and other guests, but it’s not like I have money to blow on the Glacier Point Resort.

Selene claps her hands and startles Calista. “Perfect. We’re having zucchini noodles with avocado pesto. It tastes better than it sounds, I promise.”

I smile and head toward the stairway. Guess I’ll grab something to eat while we’re out.

“You’re in the light blue room.”

“By the way, what’s your daughter’s name?”

I stop to face her. “Calista.”

“Calista.” She smiles. “Most beautiful. Did you know that’s the meaning?

“In Greek mythology, Calista was a mythological Arcadian who transformed into a she-bear, then into the Great Bear constellation.” She ends the conversation in baby talk like she’s telling Calista instead of me.

My chest weighs heavy as I walk up the stairs. I hope my daughter is a she-bear because she’ll need to be fierce for what lies ahead.

Selene was right. Dinner did taste better than it sounded. I grab our coats and button Calista up to venture out to find out more about Denver.

Lake Starlight appears to be a small town where everyone knows one another and hopefully I run into someone who might be able to tell me where he lives or hangs out.

As luck would have it, the Uber drops me off downtown in front of the local hardware store, Hammer Time. Well, he was good with his hands.

The memory of his skilled callused fingers over my nipples surfaces, but I shake my head to push those thoughts away.

The bell rings on the door when we enter. Once I’m inside, I inhale a deep breath, loving the smell of cut wood and building materials.

“Can I help you find something?” A man stands behind the counter bearing a genuine smile.

I return the smile and walk over, taking a quick glance at his nametag. “Hi Jack. This is going to sound strange, but I’m wondering if you can tell me where I might find Denver Bailey?”

“Well I talked to Austin earlier and he had some big plans tonight, but then they were all going to meet over at Rome’s new restaurant. It looks over the town courtyard.

“It’s not open yet, but I’m sure if you knock, they’ll hear you. It’s just down the street to your right a couple of blocks. Called Terra & Mare.”

“Great, thanks so much for the information.” I turn and head for the door.

“It’s not important,” I say, the door chime ringing as I leave.

I poke Calista in the belly. “Your mommy made a smart decision by going into that store. Jack is like an encyclopedia.”

She giggles and I kiss her forehead.

As I walk the streets of Lake Starlight in the direction Jack sent me, my stomach turns over and bile creeps up my throat.

Calista busies herself staring up at the sky, and every once in a while she juts out her mittened hand to catch snowflakes.

Only minutes later, the sign Terra & Mare in gold script with a maroon background comes into view. It’s definitely a classy place.

When I peer inside, the restaurant is empty except for a long table in the center that’s surrounded by a bunch of people.

It’s been more than two years since I’ve seen him, so I’m going on fuzzy memories at best. .

More than what he looks like, what I remember most about our night together is how he made me feel.

I inhale a deep breath, reminding myself of the reasons why I’m here. The wind picks up when I push the door open and a cold draft travels into the warm restaurant.

All heads turn simultaneously in my direction.

I quickly take each one of them in as I step toward the table. I scour each of them for familiarity but when my eyes land on Denver, my heart beats triple time.

All the memories of that night and what drew me to him rush to my mind. His good looks and hazel eyes. The way his arms and chest fill out his shirt.

How the stubble on his face scraped against my inner thighs.

But he’s clearly not on the trip down memory lane with me because there’s zero recognition on his face, which stokes my anger.

“I’m sorry, this is a private party. Family only,” a pretty blonde woman says, sliding out of her chair.

“Well, then I guess we’re in the right place,” I snip.

Everyone at the table exchanges looks of confusion.

A man in a chef’s uniform emerges from the kitchen, walks across the dining room carrying a platter of beef.

Wait… what the hell is going on?

I glance from the chef to Denver.

The chef doesn’t notice me, placing the tray in the center of the table. “Why is everyone so quiet?” he asks, following the others’ gazes over to myself and Calista.

My mouth drops open and I prop Calista higher on my hip. “There’s two of you?”

Denver tilts his head and the chef rounds the end of the table growing closer.

“I’m sorry, how can I help you?” he asks. The fact there’s zero recognition in the chef’s eyes either fuels my anger like gasoline thrown on a fire.

My eyes narrow. “You can tell me which one of you is the father of my little girl.”

Everyone’s head at the table swings from one man to the other.

I glance from the chef to Denver, who both wear an expression of panic.

What have I gotten myself into?