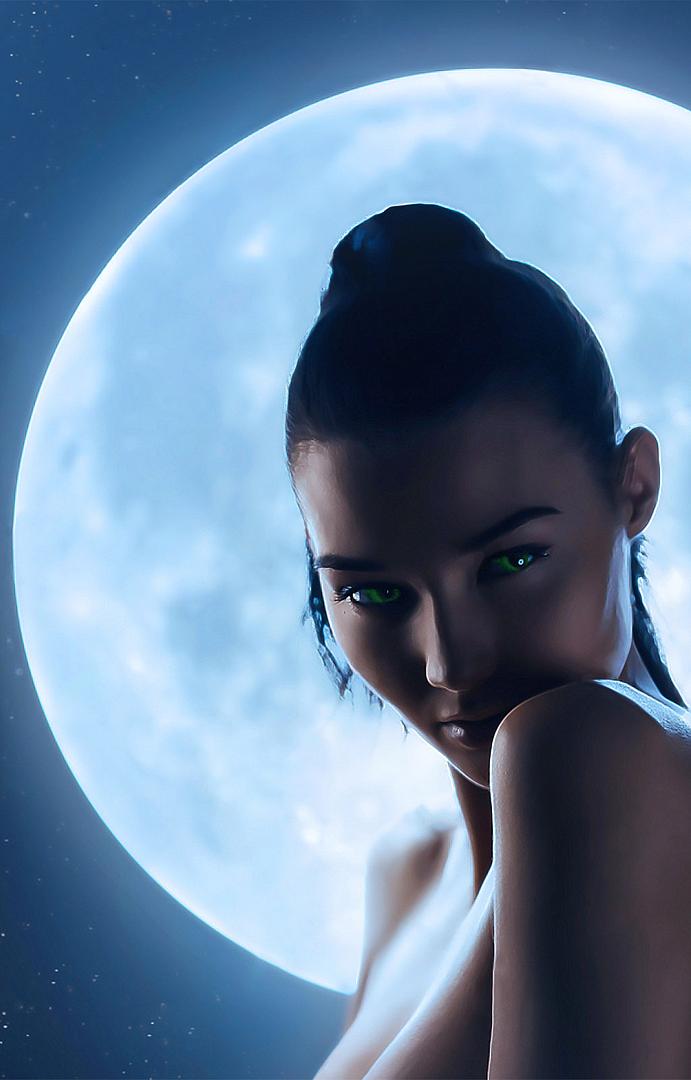 I pull the blanket up over my head, shielding my eyes from the sun rays flooding in through my window.

I feel peace here in the moments before I have to be fully awake. I remember the dream I was having.

I was standing beside a lake, staring at a man looking down at the water. He was naked, and he was beautiful. He turned to look at me and smirked.

Then the sun shone in my face, and I woke up, frustrated that I didn’t get to see what happened next. I’d had this dream before, more than once, and I always woke up at the same part.

Suddenly, I hear the piercing tone of my alarm on my phone.

I fling the blanket off myself to get up and get ready for the day. Then I remember why I had my alarm set in the first place.

The Howling is tonight! I could meet him. I hope I get to meet him.

Every unmated were for miles is going to be there. All of us are hoping to find our mates. This will be my first year, and I’m hopeful it will happen for me.

Every year, all unmated weres convene for the Howling. We howl into the sky and hope to hear our mates call to us. Then our eyes are supposed to meet, and we know.

The alpha is meant to lead us, but no one knows if he will this year.

The position was handed down to the next in line, and no one knew if he would do it. No one even knows what he looks like.

My friends have been speculating since the handover was announced.

“What if I were the alpha’s mate? You’d all have to call me your luna.”

“He can’t be too bad looking if he’s Alpha Desmond’s son.”

Alpha Desmond is my friend’s definition of the word sexy. He’s in his late forties, but he doesn’t look it. He’s tall at six-foot-three, has black hair and stubble, beautiful golden eyes, and a strong jaw.

Most women who see him can’t help but dream about him. I don’t see what the fuss was about, but then I never did.

No one has seen his son. The alphas keep their lives private where they can. Although how they’d kept their lives so private was a mystery to me.

People are always coming and going from the pack house, but no one could tell anyone what the next in line looks like, or even his name.

I’ve always thought that that’s probably a good thing. Everyone should have a private place, and no one should be dragged into the limelight.

I don’t really care what he looks like, or anything. The chances of being the alpha’s mate are pretty slim.

Shit. I’m going to be late, I think as I glance at my watch and realize I’ve been thinking too much and zoned out.

I bolt to the bathroom to shower and get ready.

“Do I seriously have to do this?” I ask, hopeful that my beta, Brodie, won’t give me the horrible news that I have to start off the Howling tonight.

“Yeah, bro, you do. You know if you don’t, your dad will drag you down to the woods by your ears.”

He isn’t wrong. My dad had already said I don’t have a choice. The alpha has to be the one to kick it off. It’s tradition, and weres love their traditions.

It’s not like she will be there. She hasn’t been yet, and it’s been three years.

I keep the thought to myself. If Brodie hears me say that shit, he’ll go into his story about mating with Alyssa.

He found his mate his first Howling. He said he could tell which howl was hers and that when their eyes met, it felt like sparks under his skin.

“There’s always a chance, man!” Brodie says while looking at me like he can read my mind and see the doubt in there.

“Fine, I’ll go,” I say, giving up before this ends up being an argument. I’m not in the mood for one of those this afternoon.

It’s only a few hours till it starts, and I already just want it over with.

It starts in half an hour.

I grin to myself, thinking hopefully that I’ll meet him.

“Kya.” I hear him from behind me and hear footsteps catching up to me. My stepbrother Reed.

He’s tall at six feet, and he’s got copper brown hair and green eyes. He’s fit, but it’s not obvious.

Shit, I forgot he’s coming too!

I cringe when I realize Reed isn’t mated. He’s going to be there too, and we have to get naked and shift.

“Umm, hi, Reed,” I say awkwardly as I blush crimson.

“You’re freaking out, aren’t you?” He looks at me sideways and smirks.

“Umm, I wasn’t. Then I realized you’ll be there when I have to strip and shift. Now I’m freaking out.”

“You’ll be fine. We’re weres. You get used to being naked around each other. It doesn’t have to be awkward or whatever,” he says, smirking and laughing to himself a little.

“Reed, you’re my brother, and I have to strip naked in front of you—and everyone else we know who isn’t mated—and shift.

“I don’t want to see your bits, and I sure as hell don’t want you seeing mine; it’s literally the last thing I want to happen,” I blurt out like I have no brain-to-mouth filter.

I hear him laugh out loud at me.

“Oh gods Ky, if you’re so worried, just shift behind a tree and come out already shifted,” he says, laughing at my obvious discomfort.

Shit. Why didn’t I think of that?

“I…um… didn’t actually think of that,” I say. I shrug and try to look like I don’t feel like an idiot.

We walk in silence for a bit. Then I check my watch.

Fuck, it starts in five minutes.

Reed notices my eyes go wide, grabs my wrist, and sees why.

“Fuck, we’ll have to run for it,” he says, right before he starts running into the woods. I’m close behind him.

I can see the clearing up ahead. I see that there are a few wolves already shifted and waiting patiently, so I veer off and strip behind a bush.

I breathe slowly and shift. I embrace the breeze through my fur for a second, enjoying the feeling of the wind, before I turn and walk over to the clearing.

I’m at the edge of the group. I tried to be as far away from Reed as possible. Looking around, I see him on the other side of the clearing, already shifted into his copper-colored wolf form.

Then, as I look around some more, I see a huge wolf coming from the darkness of the woods. He’s pitch black, and his eyes glow golden.

He strides into the clearing and walks to the center of the group. Everyone’s eyes are on this massive black wolf.

He must be the new alpha.

He nods for everyone to see, then lifts his head and howls into the sky, calling for his mate. Everyone does the same.

His howl compels me to howl back to him. He hears me and looks straight at me.

I meet his eyes, and I can hear my wolf squealing excitedly inside my mind.

He nods his head toward the woods telling me to follow him, so I do.

He takes off running, so I chase. He’s fast. Really damn fast. I’m quick, but it’s taking everything I have to stay on his heels.

We come to a big clearing with a lake and a waterfall. If I wasn’t looking at it, I probably wouldn’t have believed it could be out here. I can see the moon shining on the water and feel the breeze.

He strides to the edge of the water and looks down. He shifts while facing the water. I can see every muscle in his back pulse. Then he turns his head and smirks at me.

“Shift,” he says, and he’s clearly not asking. He turns his head back to the water.

I walk toward him slowly and stop a few steps away, and I shift.