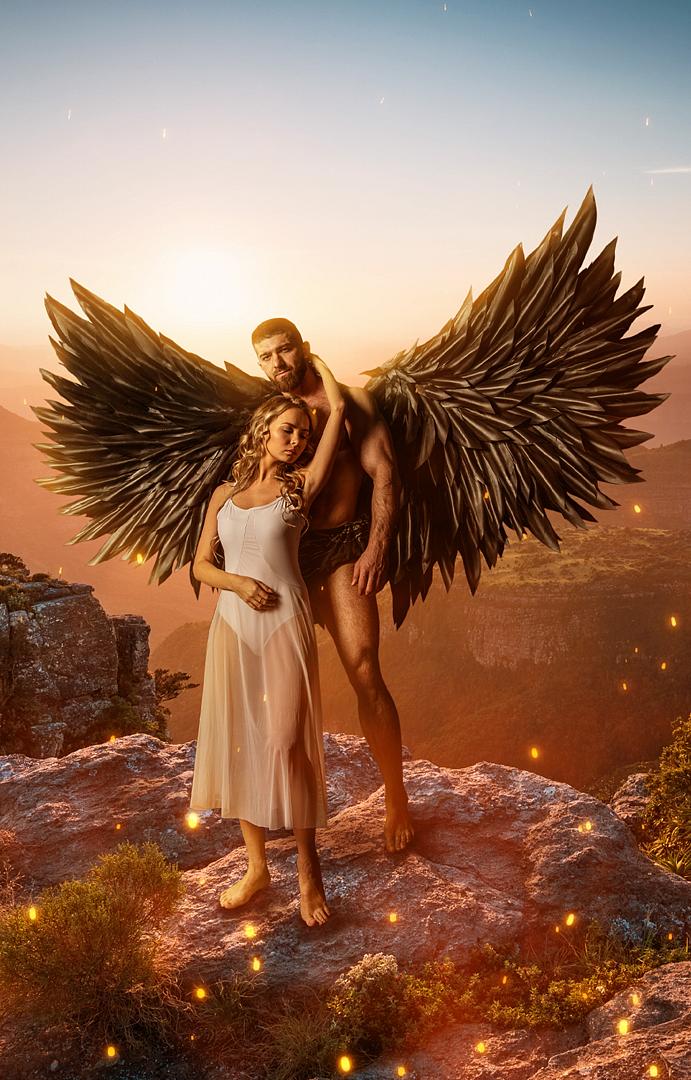 The sun glares through the trees as she makes her way up the hill. Orange and yellows collide on the sky’s canvas, making the tree limbs appear similar to long, shadowy fingers in the distance.

She covers the green of her eyes with a raised hand and squints at the road ahead. It always took her breath away.

The sound of crushing leaves at her feet is loud in the stillness of the early night. The smell of fresh rain and moist grass fills her nostrils, and crickets chirp in anticipation of the evening.

She pants, and her boot-clad feet carry her at a fast pace. She begins to break a sweat.

Moisture beads form at the back of her neck, and she wipes them away, pulling the red hair away from her face above her head.

Placing a hand on her chest, Scarlett closes her eyes and for a second, stops, exhaling deeply through her mouth.

Late afternoon on Fridays, before she leaves on the long walk to her grandmother’s house, without fail, her mother places fear in her head.

Scarlett is tired of her nagging. When her mom speaks, she does everything in her power to tune her out, mentally rolling her eyes. However, this task seems difficult to achieve today.

She is eighteen and perfectly capable of taking care of herself. She’s never encountered a problem before and always wondered why her mother was adamant about her overbearing rules.

She can hear her in her brain like a broken record:

“Don’t stop. Don’t slow down. Stay on the pathway. Don’t head out or go near the river. Don’t stop to take a breath.

“Don’t talk to anyone on the way. Call me if you see anybody, or something out of the ordinary happens!”

Afterward, she gave her mace spray and placed a kiss on her forehead. “This is in case an animal or person attacks you. See you Sunday.”

Talk to anyone? Animal attacks? There was no one else in the forest. Never e-ver.

Who in their right mind would spend time lurking and waiting behind massive trees in the middle of nowhere for the one occasion someone may or may not walk by?

She’d been walking these woods by herself since her fifteenth birthday, every Friday of every week since then.

On her way, she sees majestic birds, creepy insects, the occasional rabbit, and squirrels. She’s never encountered a human nor a wild bear all these years.

And, as of early January, the day after her eighteenth birthday, she started to see a young gray wolf with amber eyes.

Usually, it glides by her side keeping a safe distance. It was friendlier than one might expect a wolf to be, and it’s never tried to attack her.

It’s never made her feel unsafe or got close enouagh she would fear it.

Instead, it always peers into her eyes with curiosity, sometimes hunger, drool dripping from its mouth and need is sketched in its glowing eyes.

But she’s never feared it.

She isn’t sure if the wolf is male or female, but she often talks to it as if it was a male wolf who would protect her from anyone and anything in her path, and her mother would have nothing to fuss about.

Her thoughts bring her back to her nagging mother. She’d hassled her before, but lately, it was worse. She confronted Scarlett regularly about not visiting her grandmother at all.

“Mom,” she’d complained. “That’s ridiculous! Don’t you think I can take better care of myself now that I’m older?”

Her mother’s breath shook in exasperation. Slowly she let out the air in her lungs loudly through her nose. “Yes and no.”

“What do you mean, yes and no?” Scarlett questioned, perplexed.

“Dearest daughter, things aren’t always the way they seem. You are a beautiful girl, and I am concerned someone might inappropriately try to…to get close to you. Especially now that you’re of age.”

“Inappropriately? ~You are making no sense. I encounter no one in the woods. No one, Mother. I’m still taking that self-defense class you signed me up for just to make you happy.~

“You won’t go see Grandma, and I love visiting her. You can’t stop me from going. Plus—” she breathed out in frustration. “I can kick anyone’s ass.”

“I don’t want to stop you from going to see your grandmother. It’s…it’s dangerous. Think about that. This is not a joke, Scarlett. Take things seriously for once!”

“I am!” Scarlett raised her right hand to her face exasperated, rubbing her forehead. “Look, I’m going to gather my things and leave. Don’t worry. I’ll be fine.”

Kissing her mother’s head, she left to get her things in the bedroom.

She remembered she’d packed the night before. It usually took her about an hour to get everything ready so purposely she left without telling her mother she was leaving much earlier.

That way, she would have time to linger around while it was still warm and light out.

She tucked the red cotton blouse inside her dark-wash jeans and laced up her black boots. It was still comfortable enough during the day that she’d be fine with only a red cape to wear at sundown.

Looking around, relieved, Scarlett practically ran out of the house before her mother complained or worse yet, change her mind about letting her go at all.

Soundlessly, she slipped through the gates lifting her head toward the sun and letting its rays kiss her skin.

The sound of a tree limb cracking brought her attention back to where she stood. Scarlett realizes she is standing under the shade of a few pine trees, hazily daydreaming nonsensically.

Scarlett looks around and carefully scans the area to make sure there is no one there. She hates it when her mother gets in her head!

Shaking it to dissipate her mother’s fears, she mutters loudly to the sky as she pumps her fist above her head in annoyance. “Ugh, Mom! You make me crazy!” she yells in frustration.

Briskly, Scarlett shakes her head in annoyance when she spots her hairy friend roughly fifteen feet away from her.

Is he gawking at me, surprised? Her brows furrow. “I guess animals can look surprised,” she whispers.

“Hi, beautiful,” she coos, slowly reaching toward it with her hand. “I wish you would let me touch you.”

She was mesmerized by the wolf’s golden eyes, which hesitated for a second.

Suddenly, he ran toward her and leapt upward. Unable to react, she paralyzes, but the wolf reaches for her and licks her face.

“Aah!” she screams in fear.

To her surprise, the wolf relaxes in her arms and pants like a domesticated dog.

“Oh shit! I thought you were going to bite my face off! Look at what big mouth you have!”

She pets his fur, and he nudges her chest with his head twice before jumping off her and trotting down toward the river. Scarlett blinks a few times, her mouth agape, trying to comprehend what just happened.

“Wow!” she exclaims, in awe of what just happened.

“You want me to follow you?” She quickens her pace. “You’re too fast for me. Wait!”

Curiosity gets the best of her, and since she has plenty of time before dark, Scarlett follows the wolf along the riverbank.

If everything is okay, she can still enjoy the relaxing sound of the water trickling down the river rocks and her wolf’s beauty.

Scarlett smiles to herself. She likes the sound of that.

Approaching the river, she squints and zones in on a figure in the water. Quickly ducking behind a rock, she catches a glimpse of the stranger.

It’s a man, young and tall. He couldn’t be more than twenty-six, maybe twenty-eight years old. Waist deep, bare-chested, and wet. The waves of his mildly long hair are plastered around his head, and he smiles at nothing in particular.

His fingers delicately dip and touch the clear liquid. He submerges his head and resurfaces vigorously shaking the strands of coal-black hair.

The acute realization of a tan, flat stomach and broad shoulders make her clench her thighs when she moistens in excitement.

“Are you okay?” she shouts.

She watches intensely and gasps. He’s not only bare-chested but naked!

Dark hair peeks from the V where his abdomen and legs meet. His erect member and muscular thighs are a display for her to admire.

Her throat goes dry, her respiration slows and deepens. Scarlett licks her lips, aware of the way her body is affected by him.

His eyes turn to look at her. A slow, lazy smile framed by rugged stubble reaches his eyes and he stares at her open-mouthed, shocked face.

Her knees weaken. In-drawn rapid breaths escape her, and she questions, who is this Adonis?