Falling for My Brother's Best Friend

Let’s say you’re an independent, self-sufficient woman who runs the family company and you find yourself falling for your little brother’s best friend. Count all the reasons why you can’t.

#1 – He’s a womanizer. Hasn’t had a serious relationship a day in his life and changes women more often than he changes his sheets.

#2 – He’s never serious. He cracks one-liners, mostly at your expense.

#3 – When things go wrong, he seems unfazed and always remains in control. It’s so annoying.

#4 – He has tattoos. Lots of them. Everywhere. Not to mention, he owns a tattoo parlor.

#5 – There’s a growing list of how different you two are. You can’t get along for fifteen minutes—a lifetime together would land one of you in prison.

Repeat those reasons and drown yourself in work. Try to not notice his good qualities or how enticing he looks without a shirt, and DO NOT agree to live with him, even just for a short while.

Trust me, even the strongest of us can only forego temptation for so long. 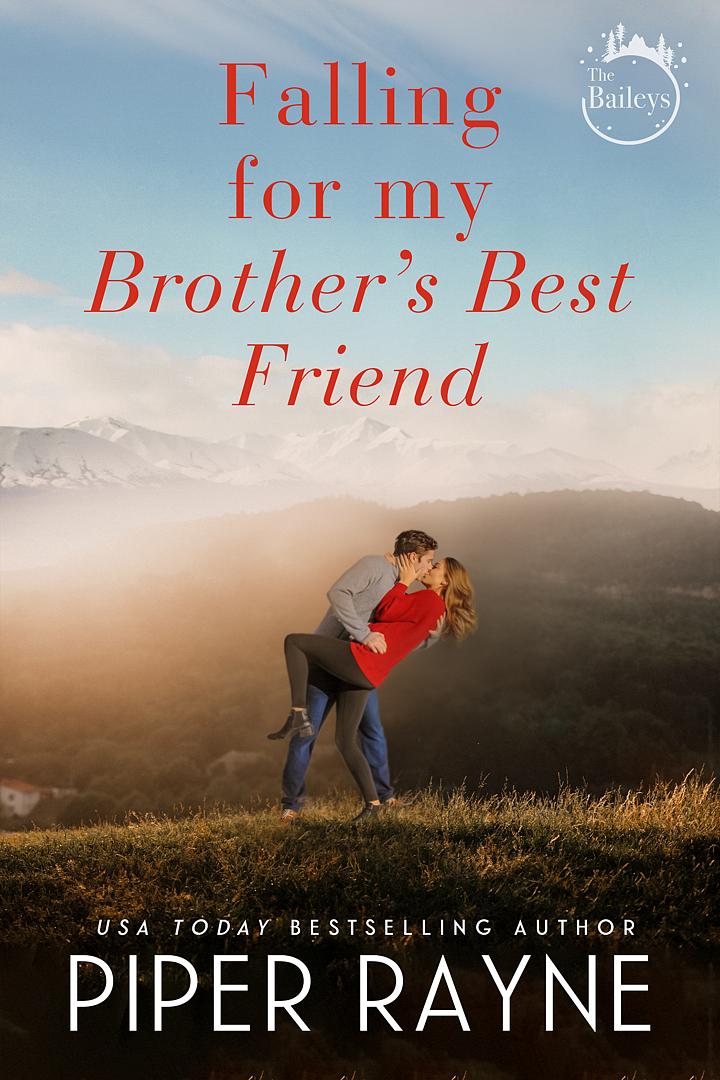 Falling for My Brother's Best Friend

Let’s say you’re an independent, self-sufficient woman who runs the family company and you find yourself falling for your little brother’s best friend. Count all the reasons why you can’t.

#1 – He’s a womanizer. Hasn’t had a serious relationship a day in his life and changes women more often than he changes his sheets.

#2 – He’s never serious. He cracks one-liners, mostly at your expense.

#3 – When things go wrong, he seems unfazed and always remains in control. It’s so annoying.

#4 – He has tattoos. Lots of them. Everywhere. Not to mention, he owns a tattoo parlor.

#5 – There’s a growing list of how different you two are. You can’t get along for fifteen minutes—a lifetime together would land one of you in prison.

Repeat those reasons and drown yourself in work. Try to not notice his good qualities or how enticing he looks without a shirt, and DO NOT agree to live with him, even just for a short while.

Trust me, even the strongest of us can only forego temptation for so long.

Book 4 of the Baileys Series

Early Wednesday morning, I tiptoe down the hall wearing a towel wrapped around my body, slide into my bedroom, and slowly close the door.

Once it clicks shut, I release the breath I’m holding, hoping I was quiet enough not to wake Liam.

Getting ready while trying not to make any noise is harder than dragging Grandma Dori out of Lucky’s Tavern on dart night.

I’ve managed to avoid Liam these past few days by being out of the house before he wakes up, and I don’t plan on running into him today.

Slowly sliding hangers over the metal bar, I select my most loose-fitting outfit from the closet.

After Austin’s wedding on Saturday—with the heat index the highest it’s been in three summers—I’m bloated.

Once I’m dressed, I comb through my long blonde hair, hoping it air dries enough to throw up in some sort of updo before I leave.

I make my bed, hang the damp towel on a hook on the back of the door, then grab matching heels and close my closet.

I turn to leave, but before I do, I walk back over to the bed and slide my hand along the comforter to smooth out a wrinkle.

I hear a groan and the sound of someone using the washroom down the hall without the door closed.

My shoulders sag in relief. Denver.

I sneak a peek as he walks out of the bathroom, still half asleep in a pair of boxers, scratching his junk.

Just what every sister wants to see.

He walks back into his room and shuts the door.

I slide out of my room and tiptoe down the hall as fast as I can, carrying my heels down the stairs into the kitchen area.

I place my shoes with my computer bag and purse on the table by the front door, setting my keys down quietly so I can quickly grab something to eat from the kitchen and get the hell outta Dodge.

As I open the fridge door to grab a yogurt, shivers race up my spine with the sound of the front door opening and closing. He’s already up, not fast asleep in his room as I’d hoped.

I close the fridge door and turn around.

“Aaaahhhh!” I jump back, startled to find his big body already leaning against the counter with his arms crossed.

“Stop it.” I peel back the lid of my yogurt, eyeing the spoon drawer he’s currently blocking.

This is exactly why I was trying to sneak out. Liam Kelly is my brother’s best friend, very often the bane of my existence, and unfortunately too hot for my own good.

He’s also my landlord for the foreseeable future since my insurance company’s contractor is taking his sweet-ass time fixing my place after the flood.

“You and that look.”

I want to scream at him for making this uncomfortable. How many people hook up at weddings?

It’s a common occurrence, so there’s nothing special about us messing around after Austin and Holly’s wedding reception.

“The look that says you just caught your prey,” I say.

“And you think you’re my prey?”

“No.” I glance at the drawer again.

He follows my vision, his smirk only widening further. His T-shirt is sweaty and clinging to his muscles, which means he woke up earlier and left to work out.

But he always keeps his door open when he’s not in his bedroom and it was definitely closed when I left my room to come down here. Did he set me up in order to talk about what happened Saturday night?

I glance at the fast food straw on the counter, next to an empty fry container. Denver. But that straw might work for my yogurt.

“You seemed to enjoy it the other night.”

I inhale a sharp breath. “That was a mistake. A drunken mistake.”

I step toward the drawer and jut out my hip. He could be a gentleman and step aside, but he doesn’t.

“I don’t think you were drunk either,” he says.

I stare into his bright blue eyes then let my gaze drift down his tattoo-covered arms that aren’t hidden by his Smokin’ Guns Tattoo Shop T-shirt.

I remember when he shot those T-shirts out of a handheld cannon blaster at the last Founder’s Day Parade. They were a hit, as is everything he does in Lake Starlight. Young and old, people love him.

“It doesn’t matter whether I was or wasn’t. It changes nothing. We’re not—”

“Spare me the lecture, I have it memorized.” He pushes off the counter, the blue of his eyes lighting with humor. “The fact remains that you couldn’t resist me.”

Liam Kelly couldn’t be any fuller of himself. Yes, he’s hot, but if he thinks I’m going to sleep with him just to be tossed aside like one of his Smokin’ Guns groupies, he’s wrong.

I open the drawer, grab a spoon, and slam it closed. I whip around to face him. “What do you want from me?”

He opens the paper that was sitting on the counter and takes a seat on a breakfast stool. “Nothing, Savannah. That’s your problem. You always think everyone wants something from you.”

He’s got to be kidding me.

“Because everyone does. Everyone always wants or needs something from me. Ever since I was nineteen, it’s been Bailey Timber or Austin or Grandma Dori or this town. something.

“You wanna see the list of people who depend on me?” My phone dings in my purse as though it’s agreeing with me. I don’t need to look at the message to know that it will be someone who needs ~something~.

He continues to read the paper, cool and collected, while annoyance grates at me as if I’m a chunk of cheese.

He has no idea what it’s like to have all the responsibilities of the second oldest Bailey. The one who was chosen to take over the family business.

I can’t even remember who I was before my parents died.

After a minute of me staring daggers into the side of his head, he says, “I said I don’t want anything.”

“And you’re lying.” I shove a spoonful of yogurt into my mouth.

He lowers the paper. “You’re right. I’m lying. I’d like you to admit that you weren’t drunk on Saturday.”

I throw my hands in the air. “Seriously? What does it matter to you?”

The paper falls from his hands and he leans back. I soak him in once again, pushing back the memories of what it felt like to have his hands all over me.

He says, “It’d be nice to see you be honest with yourself for once.”

“Why? So you’ll feel better? Are you looking to up the caliber of woman in your bed from giggling girl to sophisticated woman?” I heap another spoonful of yogurt into my mouth.

He narrows his eyes. “You know what Saturday was. Tell me you didn’t enjoy it.”

I clean off the spoon and put it in the dishwasher before throwing away my yogurt container. “What was it then? If you remember, I ran out of the room.”

His words of praise for my body have repeated in my head ever since, but I can’t live in some fairyland where I’m the one woman who could make him change his ways.

“If I have to tell you, then you’re not worth it.”

His words cut deep, as he meant them to. Rarely does Liam say anything without thinking it through. That’s where he differs from my brothers.

The three of them may be best friends, but Denver and Rome say whatever, whenever without thinking of the consequences. Liam though, he chooses his words wisely and with purpose.

My phone dings again and I sigh. “Fine. I need to get to work.” I slide on my heels and swing my bags over my shoulder, digging my cell phone out of my purse.

“You gotta bear all that weight, right? I mean, the success of everything rests on you.” His back is to me. He’s stripped off his T-shirt and is digging through the fridge.

I stand in place, staring at him. My shoulders fall, my bitchy attitude faltering. I hate that we’re like this. “You just don’t understand… I mean, the company and the family. Grandma Dor—”

I wish I could break the distance, place my hands on his hips and cast a trail of kisses up his back, taste the saltiness of his skin and trace his intricate tattoos with my tongue.

Instead, I spin on my heel and slam the door behind me.

“For the love of God, who wants something now?” I yell, thankful Liam lives miles from neighbors.

In full Brooklyn fashion, she writes Guess What? Followed by another text.

Brooklyn: Time to plan a reception, Maid of Honor. YAY!

I stare at the phone before looking back at the house one more time.

Liam would be the best kind of distraction to make me forget that I’m going to die alone after watching all my siblings get their happily ever afters.