Nathan goes looking for his missing wife by moving back to her old town. As he digs deeper into the town's history, he discovers more about the Crones—and who may have taken her away from him and their children. 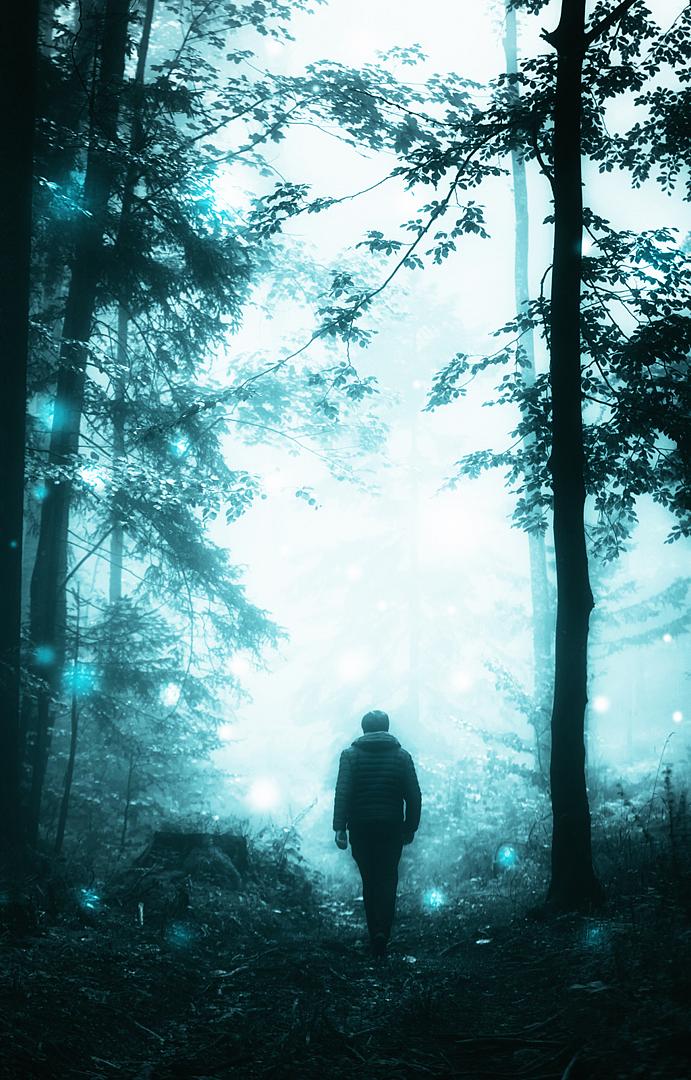 Nathan goes looking for his missing wife by moving back to her old town. As he digs deeper into the town's history, he discovers more about the Crones—and who may have taken her away from him and their children.

I have seen the dark universe yawning,
Where the black planets roll without aim;
Where they roll in their horror unheeded, without knowledge or lustre or name.
— H. P. Lovecraft, Nemesis

The man was blindfolded, hog-tied, and naked. He sat on his knees, which were buried halfway in the snow that had fallen the night before.

If the man felt any chill, he didn’t show it, but the crowd of onlookers did.

The dozen or so people who had showed up were shivering from the morning chill; the sun had yet to pierce through the shade of the trees around them.

Teeth chattered against each other, and the fog of hot breath flowed into the air from their mouths.

The townsfolk gave the naked man a wide berth, huddled together off to the side in small groups to get as much warmth as possible.

Beaver pelts and clothes made from the thick wool could only do so much against such a brutal New England winter.

“Husband, when will they show up?”

Phillip Evergreen looked over at his wife, Elizabeth. She spoke in a whisper because in her hands was their daughter, Mary, wrapped in the densest furs he’d caught this year.

Phillip and Elizabeth had done everything they could to keep their girl warm, yet she shook.

Cold sweat trickled down her tiny forehead and onto her closed eyes. She opened them a pinch, revealing a pair of bright blue gems that neither Phillip nor Elizabeth shared.

Those eyes were the light of Phillip’s life.

The sickness had taken too many of the young ones this year, and the Lord be damned, Phillip had no intention of letting Mary join their ranks.

I’ll gladly shake hands with the Devil himself in damnation if it means her salvation.

“They will be here,” Phillip said to Elizabeth. “To not do so would anger the ones we seek.”

As the last words left his lips, the brush from behind them began to move. A group of Iroquois emerged, all dressed in huge sets of furs and hides…well, almost all of them.

The last to arrive from the woods was their powaw. He wore naught but a hide skirt and a wooden mask that covered his head.

The mask depicted the face of a creature so grotesque that only a devil could have dreamed it up. The longer he looked, the more Phillip could have sworn it moved and shifted as though it were alive.

Phillip felt the overwhelming urge to look away, so he dipped his head down and saw that the powaw wore no shoes. But like the naked man on the ground, the powaw didn’t seem to mind.

“Is he their witch?” Elizabeth whispered.

“They don’t have that word, but yes, a witch is what we would name him.” Phillip watched as the masked man calmly proceeded toward them.

The powaw stopped in front of Elizabeth and craned his neck to get a better look at their little girl. “She is of yours?” a voice asked from behind the mask.

“Yes, she is of us,” Phillip answered, nodding toward Elizabeth.

The powaw grunted and faced the naked man. “And he is of yours?”

“Yes,” Phillip muttered. “He is my brother.” The words hurt as he uttered them.

“Good. It is good.” The masked powaw walked over to Phillip’s brother and grabbed him by his thick blond hair. With surprising ease, the powaw dragged the man through the snow.

Before Phillip could finish, a tree appeared before him. When he looked up and tried to find the top, he was left dizzy and nauseous. Yet, somehow, Phillip had only just noticed the tree.

What devilry is this? he thought, shaking at the sight, but he quickly shook off the fear.~ No matter, my choices have been made. Only the Almighty can judge.~

The rest of the Iroquois filled in the holes around the tree, creating a horseshoe of people surrounding Phillip’s brother, who now sat in the shade of the towering timber.

The powaw looked out at the crowd with his ever-shifting mask. “U-h-t-kû!” he cried.

“U-h-t-kû!”the powaw screamed, his voice like a crack of thunder.

Then the tree opened.

The powaw had advised Phillip to look away from what would happen next, but he didn’t. His brother was willing to make this sacrifice, so Phillip watched it all.

He heard it all—every scream, every cry, and every snap. By the time it was over, Phillip wanted nothing more than to scratch his own eyes out.

But then he heard the cry, and those thoughts vanished. He turned toward Elizabeth, but there was no fear in her. She was smiling, looking down at their little Mary and hugging her close to her chest.

It was Mary who was crying. She hadn’t cried since taking ill.

“It worked! By the heavens, Phillip, it worked!” Elizabeth laughed with joy and looked at her husband.

He stared into Mary’s eyes. They were green now—green and brown, like moss growing on bark.