When a fire rips through Leila’s home one night, she loses her one remaining asset as a single mom: her home. When she is hospitalized with severe lung damage due to smoke inhalation she has no one to look after her daughter, Kensie. She has no choice but to temporarily trust Ben, a handsome fireman, but as her health worsens, Leila fears for her daughter’s future. Is a home with Ben feasible? For her and Kensie both? 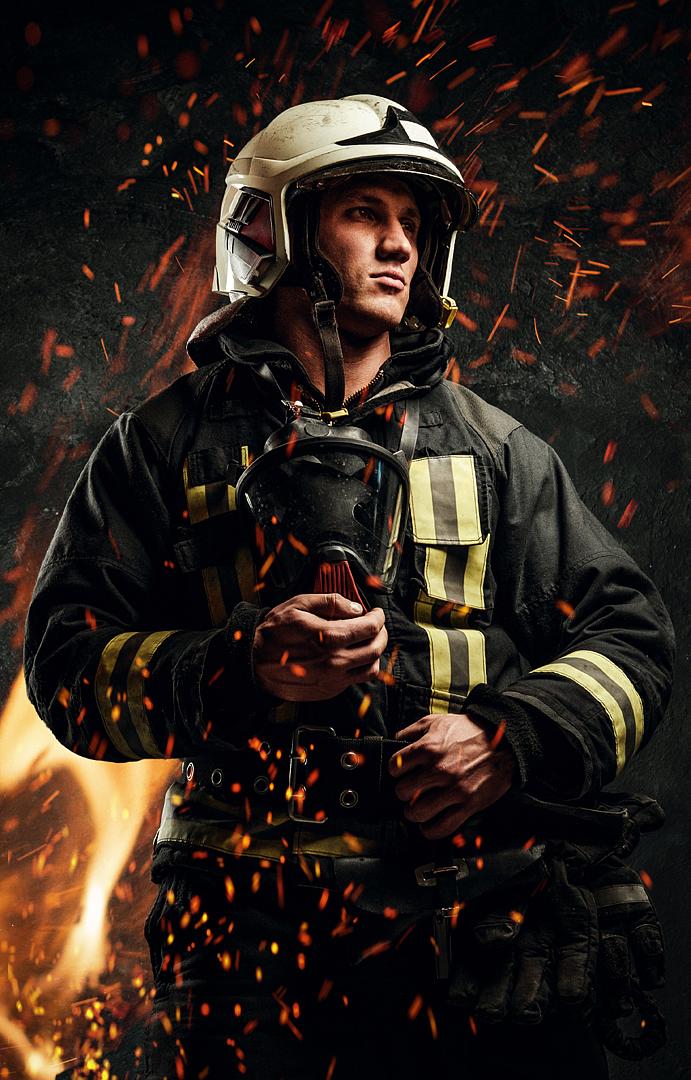 When a fire rips through Leila’s home one night, she loses her one remaining asset as a single mom: her home. When she is hospitalized with severe lung damage due to smoke inhalation she has no one to look after her daughter, Kensie. She has no choice but to temporarily trust Ben, a handsome fireman, but as her health worsens, Leila fears for her daughter’s future. Is a home with Ben feasible? For her and Kensie both?

“Somebody please come quick! Our house is on fire! It’s…”

I choked and started to cough, because of all the smoke that welled up from downstairs. I had no idea when it started, or how big the fire was, but it was getting really warm on the floor underneath my feet.

“What’s your name and address, ma’am?”

I coughed again, and tried to calm my terrified daughter that was sobbing into her teddy bear.

“How many are there inside the house, ma’am?”

“Three! Me, my daughter and our dog. Hurry! We are trapped in her bedroom upstairs.”

I thought about how Molly had woken me up, already before the fire alarm had gone off, by barking and scraping at the floor with her tiny paws.

And I didn’t really remember much else before I was sitting in Kensie’s bed, with Molly between us, calling for help, minutes after.

I tried to calm her, but the panic of being stuck in a life-threatening situation without being able to do anything, was numbing. I wanted to scream in terror, just like her, and hide under the covers, but I couldn’t.

And even though my words were meant to be soothing, I knew they were worthless if we didn’t get out of here in a matter of minutes.

The smoke was already seeping in through the keyhole of the closed door. And I could even see smoke coming up between some of the floorboards.

“HURRY!” I screamed, feeling the smoke fill my lungs, making me cough again.

“They’ll be there in one and a half minute,” the man on the phone said, but he might as well have said seven years, because right there and then, even seconds felt like an eternity of despair.

“Hold the line until you see the firetrucks, okay? Keep talking to me. This is very important.”

I didn’t answer. My head was too filled with horrible scenarios to think straight.

“Ma’am? LEILA!” the man shouted, and pulled me back to reality. And after I answered, he kept giving me instructions on what to do.

“Stay on the floor. Do you hear me? Get down on your hands and knees and crawl toward the window. Not the door, the window. Okay?”

“Yeah…,” I mumbled, while trying to get my daughter to do what I did. But it wasn’t easy to get a five-year-old with a panic attack, to listen.

“Do not open any doors or windows until I say so. Not unless you really struggle to breathe. Because when you do open, you’ll fuel the fire with oxygen, and everything will escalate rapidly.

“Okay? Are you on the floor next to the window now?”

“Yeah, we are,” I answered hoarsely, and pulled Kensie and Molly as close to me as possible.

“Are there any outdoor fire escapes outside the window?”

“No… I was supposed to fix that last year, but…”

I couldn’t hold my tears back any longer. The thought of how I’d failed as a parent, for not making sure we could get out safely in situations like this, hit me with full force.

But there simply wasn’t enough money after my husband’s funeral last year, to do it. I couldn’t even afford to fix the heating in the bathroom.

So every time my daughter was having her bath, I used the old zinc washbasin I’d found in the garage, filled it up with warm water in front of the fireplace, and made sure she didn’t get cold.

But now…? We wouldn’t even have a house to live in. Everything we owned was going up in flames around us. Even Kensie’s Christmas gifts.

“It’s okay. Just stay where you are, ma’am. Do you hear the sirens now?”

I didn’t. I just kept coughing, trying to shield Kensie’s face in my nightgown, to protect her from the worst smoke.

I felt tired and dizzy, and I started to wonder how badly I would have to struggle to breathe, before I could open the window.

“LEILA! DO YOU HEAR THE SIRENS?”

“I…,” I started, but I only ended up coughing even more.

With a large amount of effort, I got up on my knees, grabbed the handles and pushed the window open. And the feeling of the cold winter air felt brutal, as the fire sucked it in passed me.

I tried to scream for help, but my voice only came out as a choked squeal, and I felt my body collapse like a sack of potatoes.

My knees hit the floor so hard that it should’ve made me scream, but instead I fell over to my side and curled up in a limp fetal position.

The only thing I registered before I passed out, was the flames that were about to eat their way through the floor next to the door.

The voice came from far, far away, and I couldn’t comprehend what was going on for a moment. But then I tried to inhale, and started coughing like mad.

A mask was suddenly covering my face, and I got lifted up from the floor by two strong arms that carried me out through the window, into safety.

Another series of coughing took over, but I could hear the calming, deep voice of the firefighter in my ear.

So few words. So overwhelmingly important. They were safe. It didn’t matter what happened to me, as long as my daughter was safe.

But when the fireman gently put me down on a stretcher, with paramedics wrapping me in warm blankets, ready to start with oxygen treatment and whatnot, I knew I wanted to live too.

I needed to live for my daughter. I was the only one she had left. And I had to stay alive.

The firefighter was about to release his grip of me, but I wouldn’t let him go. I needed to see the man who had risked his own life to save us. So I started to pull weakly at his mask, while still holding on to his arm.

My voice was hissing and strained, and almost too quiet to hear. But I tried again.

I saw the name “Ben Cavanaugh” on a tag on the side of his chest, and felt somewhat relieved to at least know his name.

But I needed to see his face too, so I pulled at his mask one more time, and made him take it off. And for a moment, I stopped breathing.

For a moment I just blinked my eyes, and looked into the most caring, brown eyes ever. And for a moment I felt more lost than I’d ever been.

But I didn’t hear the well-meaning orders from the paramedics. In my world, only Ben existed. Ben and his gorgeous eyes. But then…

My daughter came running with our little chihuahua in her arms, and I immediately jumped off the stretcher, and got down on my knees to embrace them. We were safe, thanks to little Molly and…

I looked back up at this magnificent man that had carried me in his arms. His smile was genuinely warm and loving, and it seemed like it got even bigger when he saw my daughter clinging around my neck.

My throat hurt when I talked, but this was important to me.

I loosened her grip, and turned her around to face him, and her shy appearance made him giggle.

Still, Kensie stuttered a little “thank you,” and took Ben’s hand when he reached out to her. Then he sat down on his heels in front of her.

“Do you know what? I think you are the bravest little girl I’ve ever met. You took care of your mom like a true hero, until we could come and get you out. I think you must be a super princess in disguise.”

Kensie giggled, still a bit shy, but now she dared to look at him.

“Molly helped too,” she said, and lifted our dog so he could pat her, and I was amazed when he actually could stroke her head without her either barking or growling.

She was normally scared of men, but obviously not this one. Maybe she understood that it was him that had saved us?

“Really? She helped? That’s such a good dog. It looks like you two are close friends. Am I right?”

He smiled at her, so widely that his row of pearly white teeth were at full display, making a big contrast to the soot in his face.

“Yes. She’s the bestest friend there is,” Kensie said, and returned his smile. Then, Ben got up and looked at me.

“I’m very sorry about your house, Mrs. Montgomery. Do you have family to stay at? Friends? Is your husband…”

“My daddy’s up in heaven,” Kensie interrupted.

“You shouldn’t talk about him, because Mommy gets sad.”

Me and Ben stared at each other in shock for a moment, before Ben cleared his throat to speak.

“It’s okay!” we exclaimed almost at once.

“No. I shouldn’t have…” he started, but I cut him off. I really didn’t want him to feel bad for our situation. It wasn’t his fault.

I started to cough again, and two of the paramedics lifted me back up onto the stretcher and forced me to lay down.

They raised the stretcher to a seating position to ease my breathing, and placed an oxygen mask over my mouth, one that was a little different from the one Ben had placed on my face before he carried me out from the fire.

I looked at him, and was met by a pair of depthlessly sad eyes.

“CAVANAUGH?! TAKE THE HOSE ON THE LEFT SIDE OF THE HOUSE!”

Ben nodded toward the unit officer, and turned to continue his work. But then he stopped, and walked up to me.

“Your daughter. Does she have someone to take care of her while you’re in the hospital?” he asked, with his soul-searching brown orbs piercing straight through me.

I swallowed and tried to talk, but ended up in a series of coughs. But instead of asking again, he did something that I believe no other man would ever consider. He sat down on one knee in front of Kensie.

“Your mom needs to go to the hospital now, princess. Do you and Molly want to come and stay at my place tonight? And then we’ll visit your mom tomorrow morning, after you’ve had your breakfast?”

Kensie nodded and beamed toward him like the sun itself.

“Is it okay with you, Mrs. Montgomery? If not, I will make sure someone…”

I reached out for his hand, and squeezed it. And the way he looked at me, showed that he understood everything of what I tried to say with my eyes.

“I’ll keep her safe,” he said and gave me a reassuring smile. He was a stranger. He was a man. And I literally placed my heart in his hands. But I knew I could trust him. How? I don’t know, but I just knew.