Ira has been trained her entire life to hunt and kill werewolves by her abusive father, the leader of the Hunter Clan. On her eighteenth birthday, she’s expected to kill her first werewolf and pledge herself to the clan, but instead she turns her back on everything she knows and runs away with the wolf she’s supposed to kill.

Now she’s surrounded by a whole pack of werewolves and at the mercy of their alpha, who won’t stop calling her “mate.” 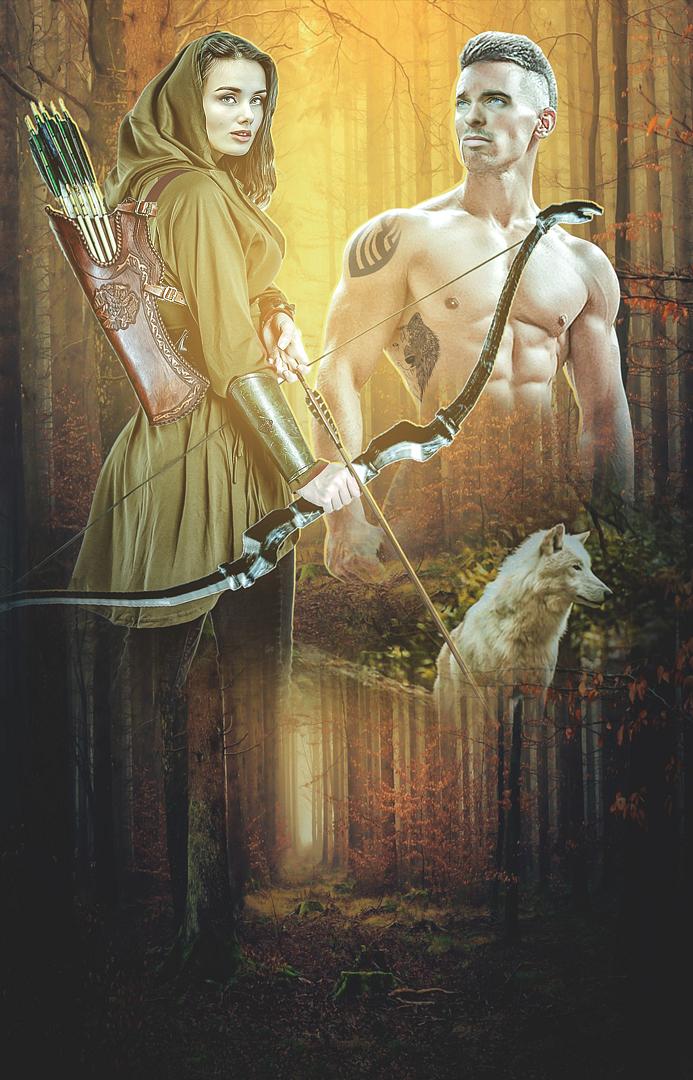 Ira has been trained her entire life to hunt and kill werewolves by her abusive father, the leader of the Hunter Clan. On her eighteenth birthday, she’s expected to kill her first werewolf and pledge herself to the clan, but instead she turns her back on everything she knows and runs away with the wolf she’s supposed to kill.

Now she’s surrounded by a whole pack of werewolves and at the mercy of their alpha, who won’t stop calling her “mate.”

“It is time, Ira,” Father said from the doorway of my little “room.”

I doubted that anyone would actually consider the broom closet I was currently sitting in a room, but it was all I ever knew. It was my safe haven, as much as it was a prison cell; the place I both hated and still sort of loved at the same time.

I felt dread starting to rise in my chest once I fully realized what I was about to do. I knew that this day was coming but I still hoped that something was going to happen to prevent it.

I didn’t want to do what they expected of me, but I knew what he would do if I dared to disobey his orders, so I quickly stood up, my eyes trained on the floor as I tried to avoid eye contact like I was thought to do.

“Yes, Father,” I whispered, and after a tense few minutes of him drilling holes into my skull and me trying not to cower in fear, knowing well that it would only provoke him further if I showed even an ounce of cowardice.

He finally turned around and led me down the hall.

I sighed in relief, since the last thing I wanted was for him unleash his anger on me right now.

I was nervous about my task and that would only add more stress to my already fraying nerves.

I felt a dozen pairs of eyes on us, watching and judging my every move as we tracked through the house, their stares making me uneasy.

I managed to keep my face devoid of any emotion as we passed them by and went outside.

Father stopped at the edge of the forest and I did the same, clenching my hands into fists as I tried to stop them from shaking.

A soft, pitiful whine drifted to my ears, and taking a peek through my lashes, I saw a big off-white wolf lying beneath Father’s legs in a cage a size too small for him.

His soft-looking fur was matted in blood and dirt, a gnarly-looking gash sitting over his right eye. His breathing was shallow and broken but his yellow eyes were alive, shining with hatred as he glared at me.

I shuddered under his gaze and took an unconscious step back, my heart breaking at the sight of the broken creature. Just the thought of what I was expected to do had me wanting to run far away.

“Ira,” I heard Father calling my name, his face a stone mask as his hand held a gun outstretched toward me.

I took a deep breath, willing my body to cooperate as I grabbed the gun with a shaking hand and pointed it at the wolf.

Our eyes locked, his hard and full of hatred, making mine fill with tears that I tried to shake away.

“Ira, today!” Father yelled, startling me, and I nodded.

The wolf continued to stare at me, his gaze almost curious now before he closed his eyes and lowered his head to the ground. I closed my eyes, too, unable to look at the poor creature any longer.

I tried to pull the trigger but a small voice inside my head stopped me.

“If you do this, you’ll regret it for the rest of your life!”

I tried to shake it off and ignore it but it only grew stronger with each passing minute until I was sure that I was going crazy.

“What are you waiting for!? Do it!” Father shouted at me, and at the sound of his harsh voice my jaw clenched in annoyance.

I looked at him to see an ugly sneer plastered on his face, and I realized how much I hated him.

He had tortured me my whole life; the memories of beatings and insults were overwhelming, and I felt anger boiling inside of me.

My body started to shake as I relived every single day of my miserable existence and something in me snapped.

“No!” I shouted and moved my hand so that the gun was now pointing in his direction.

“What the hell are you doing!?” he growled but kept his distance.

“What I should have done ages ago. Open the fucking cage!” I said in a strange, strong voice that sounded nothing like me, and by the look on Father’s face, I wasn’t the only one surprised by it.

He unlocked the cage although he was obviously not happy about it, a look of pure hatred on his face as he eyed the gun pointed at his head. He then quickly retreated as the wolf stepped out of the cage.

“Run!” I said to him, pointing to the woods behind us, but he just stood rooted to the ground looking at me with wide eyes.

“Come on, what are you waiting for? Run away!” I shouted at the stubborn creature, but he continued to stand there for a few more minutes and then lowered to the ground.

He shook his head at me and then toward the house from where we could see the rest of the clan coming out, probably wondering what was taking so long.

I stared at him in confusion until my mind registered what he was trying to say. He wanted me to go with him.

I didn’t know anyone outside of the clan; hell, I never even set foot off of our land.

It took me a minute to make a decision before I jumped on his back, my arms wrapping around his neck and my fingers tangling in his fur.

The voices from the house grew stronger as he started to run through the forest with an inhuman speed.

I cast one last look toward the place I had called home for as long as I could remember and then turned around feeling not at all ready to face the unknown future.

What have I done?