When Banshee’s forced to come back after a brutal death of a brother, there’s a new change of command already in a span of two years that she had been gone. Snake is coarse and Banshee is ruthless. Both venomous towards one another, they clash heads that seems over and over again until one steamy day where Banshee’s left with a choice of either telling him the danger she was facing or leaving. For her, leaving was easier and so she did. A few months later, Snake finds her in another club and brings her back where she finally decides to stay for good, telling him every dark detail of her life, until she’s taken away this time against her will. After being rescued, they face a new reality on how to be together without running or fighting. 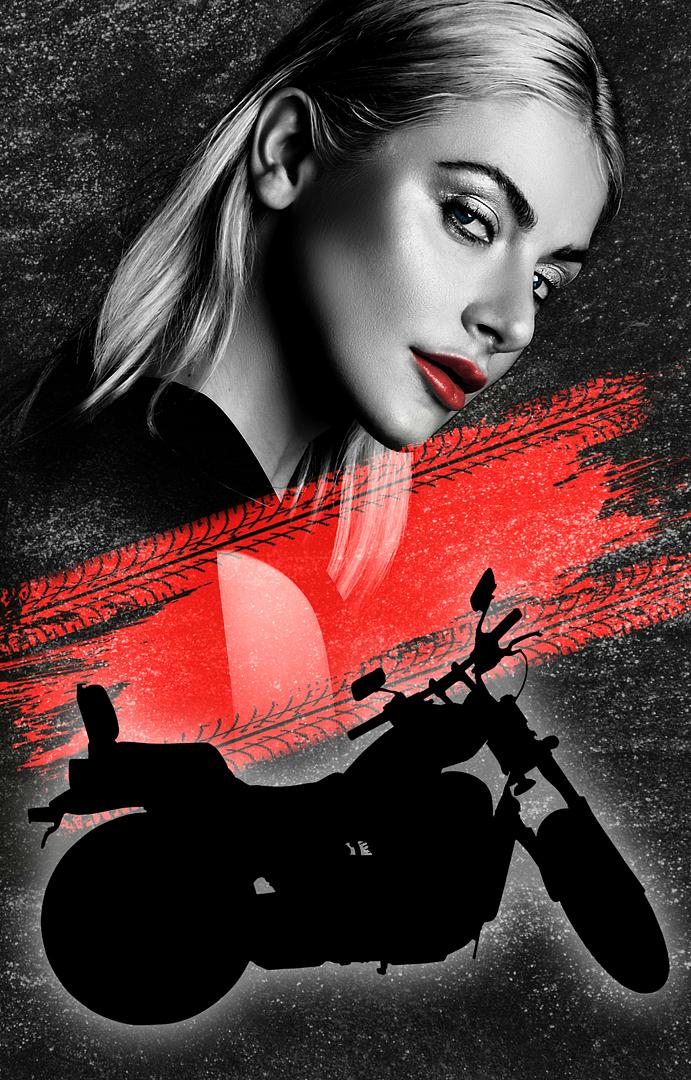 When Banshee’s forced to come back after a brutal death of a brother, there’s a new change of command already in a span of two years that she had been gone. Snake is coarse and Banshee is ruthless. Both venomous towards one another, they clash heads that seems over and over again until one steamy day where Banshee’s left with a choice of either telling him the danger she was facing or leaving. For her, leaving was easier and so she did. A few months later, Snake finds her in another club and brings her back where she finally decides to stay for good, telling him every dark detail of her life, until she’s taken away this time against her will. After being rescued, they face a new reality on how to be together without running or fighting.

I had missed the funeral, and missing a brother’s funeral was nothing but a show of disrespect to the family. However, I did have an excuse for it.

I had been through hell for the past two years. My life wasn’t as pretty as it sounded; well, there’s nothing really pretty about the lives we all live.

Better not waste more time then. I opened the door to the clubhouse, knowing the door was unlocked. After all, it was The Gathering—a fancy name for a goodbye party to the brother we had all just lost—~Armstrong.~

The man was more like a father to me than a brother. He took care of me, brought me here to the Hellion, and showed me the ropes of everything with the promise of making me part of the family.

The whole clubhouse not only was too loud for my liking but also reeked of different kinds of alcohol, which almost made me grimace.

The wetness on the cemented floor indicated that the others had already poured one out for Armstrong.

Seeing that some of the alcohol had already surrounded my combat boots, I hissed and tried shaking it off. But it was a lost cause. Tomorrow, I thought, ~tomorrow, I’ll just wipe it all off or ask one of the trainees~.

“Well, I’ll be fucking damned.” Derek, known as Poison, smiled at me, pulling away from one of the women’s grasps.

He then stalked over to me and gave me a big hug. “Didn’t think you were going to show up, Banshee.”

He had said “Banshee” too loud, as the room’s murmur died down into a deep silence.

When we were about to part ways, he just shrugged at me with an apologetic look. The dumbass knew enough that I didn’t like any kind of attention, especially now that a brother had just died.

Seconds later, he went back to the woman, who looked at me with warning eyes. I tilted my head for a few seconds, narrowing my eyes at her.

I was away for just short of two years, and you’d think that the new women in the club would learn not to look down on those with the cut.

“Banshee!” Catatonic ran up to me, a beer hanging from her fingers. She was wearing heels that made her look almost as tall as me.

The women at the clubhouse sneered at her as she passed them. She was always the most beautiful one in the place, thanks to her dark hair, golden eyes, and curvy figure. “Holy shit, I missed you!”

And that was when some people approached and greeted me, hugging me and sharing sentiments of sadness about Armstrong, knowing well that I was the only person close to him.

Armstrong always had a hard time opening up to those who wanted to get close to him, but fortunately, when he found me, he showed me his vulnerable side and allowed me to feel what it’s like to have a dad again.

Those who were new, at least whom Iviewed as new, came up to me and greeted me, fully aware of my reputation within the club. I was, after all, the first woman to ever get the cut, and Catatonic was the second.

I had tried really hard to get more women into the club, but my efforts weren’t met with open arms. But, at least, there was someone that I related to.

Others, both new and old, were not really friendly, given that I was a woman wearing the Hellion MC cut.

Death came up to me and patted my back, his figure towering over me as he passed me a beer. I took it without hesitation, downing several gulps.

The men had already returned to their businesses as the two of us sat down by the bar.

“Why weren’t you at the funeral?” he asked, cocking his brow and curiously gazing at me with those brown eyes of his. “In fact, why weren’t you here the days before he died? He called you, said he was the only one that knew your number.”

I just nodded. “Got tied up with business.”

Literally. But they didn’t really need to hear the story about why I went away.

Dropping back the empty bottle, I snapped my fingers, and a woman appeared behind the bar. The first thing I noticed about her was that she had bigger boobs than I did.

That was for sure—they looked like they were about to pop out of her crop top.

She raised an eyebrow at me, her blue eyes filled with disgust. No doubt my blue eyes are brighter than hers, though.

“What do you want?” she asked, running her hand through her short ponytail.

Death was shaking his head. It wasn’t aimed at me, but this little bitch in front of me.

“Go get yourself one, whore,” she spat, walking closer to the end of the bar. “You think you can walk all over me just because you’re new?”

I was already chuckling at her, and I knew that I had everyone’s attention, as the room had fallen silent again.

Turning to Death, I pointed at the woman. “Honestly, I’ve been gone for two years; you guys told the newbies who I am, but you forgot to mention it to the women in this place?”

“Oops?” Death just smirked, amused by the scene playing right in front of his eyes. He glanced at the woman and shook his head again. “Wrong move, Patty.”

“What? I’m supposed to be afraid of this old whore?” Patty sneered at me. “This bitch is—”

Before she could finish, I grabbed her shirt, used my other hand to grab her ponytail, and slammed her face down on the bar counter. She screamed, but that just made me want to do it again.

When I let go, she collapsed on the floor. So I jumped atop the bar counter to get a good look at her. Blood spurted out of her nose as she just kept screaming, “My nose! You broke it!”

“Your nose would have been fine if you weren’t stupid enough to talk back to me.”

She kept crying at me, tears streaming down her face. I just rolled my eyes.

“Next time, think twice before talking back to a woman who can kill you with a single swipe of a knife. Also, look first, yeah? I’m wearing a cut. What does that tell you?”

“Ugh, I’m trying to be nice here, and you’re just whining.” I waved my hand at her dismissively. “Go to the doc. Fix your shit before I break more of your bones.”

Shaking, Patty gathered herself and stared at me with eyes full of fear, pinching her nose to stop the nosebleed. “Boo!”

She then bolted, screaming at the top of her lungs that I was going to kill her. Everyone burst into laughter, myself included, as I got down the bar counter. Death and I even high-fived.

“The fuck is going on here?!” The roaring voice made all of us stop and turn toward the man standing by the stairs. “We’re mourning a brother’s death for fuck’s sake, and you all are causing a ruckus?!”

I found myself ogling the man. He had long, jet-black hair tied up into a bun, letting everyone see the shaved sides of his hair. Normally, I wouldn’t have fancied this on a guy, but damn, he was rocking it!

The hairstyle made him look mature, especially with the beard. Moreover, his olive skin tone complemented his ebony eyes.

The man’s pink lips were pressed into a grim line, indicating clear displeasure, but my gaze continued to wander down his right arm, which was covered in ink.

I wonder where that tattoo leads to.

“Well?” He raised his thick eyebrows at the men in front of him. Then, slowly, they all snapped their heads toward me, ratting me out, which made his eyes wander down to me.

What a bunch of pussies! I’m going to have to kick their asses, preferably soon.

My eyes slightly widened at the sight of his cut. By his sleeve, it was clear what position he held. President, it said. ~Fucking hell! So this is the new president that Armstrong mentioned? Fucking mint, then~.

“No more time, Catalina.” ~Armstrong’s gasping and hissing made it obvious that he was wounded.~ ~“The new pres. wants you to go back. You have to go back, okay? Remember, I love you like the child that I never even had. Come back to us. My time is up.”~

With a wide grin, I gave the man a mock salute. “Good to be back, Pres. Banshee reporting for duty!”

I could sense Death getting all tensed up behind me, and the same could be said about the rest. Poison, who was somewhere afar, could be heard mentioning how it was stupid of me to even talk to the president like that.

I didn’t care, though. I had my fair share of meetings with those engulfed by darkness, and from the looks of it, this man embodied the same darkness as I had.

Maybe mine’s more intense. Scratch that! It isn’t a maybe~. My darkness eclipses that of those who are even here.~

The intensity with which his dark eyes narrowed at me was making me want to look away, but I knew better than to bitch out of a staring contest. If you couldn’t look your president in the eyes, then you didn’t deserve to be wearing the cut.

“Banshee.” My name rolled out of his lips, and I almost shuddered.

“You know it, gorgeous.” I winked.

I could tell from the way he stalked over to me and gripped my wrist that he wasn’t pleased about what I said.