In the Shadow of Midnight

In the Shadow of Midnight: A werewolf princess. A vampire general. When Madeline Vadon and Drystan Heller find themselves tied together in unholy matrimony to end a war, the last thing they expected was to fall in love. But as the new couple uncovers the vampires' plot to undermine a peace agreement, they must band together to protect it—and their union—whatever the costs. Can love truly conquer all? 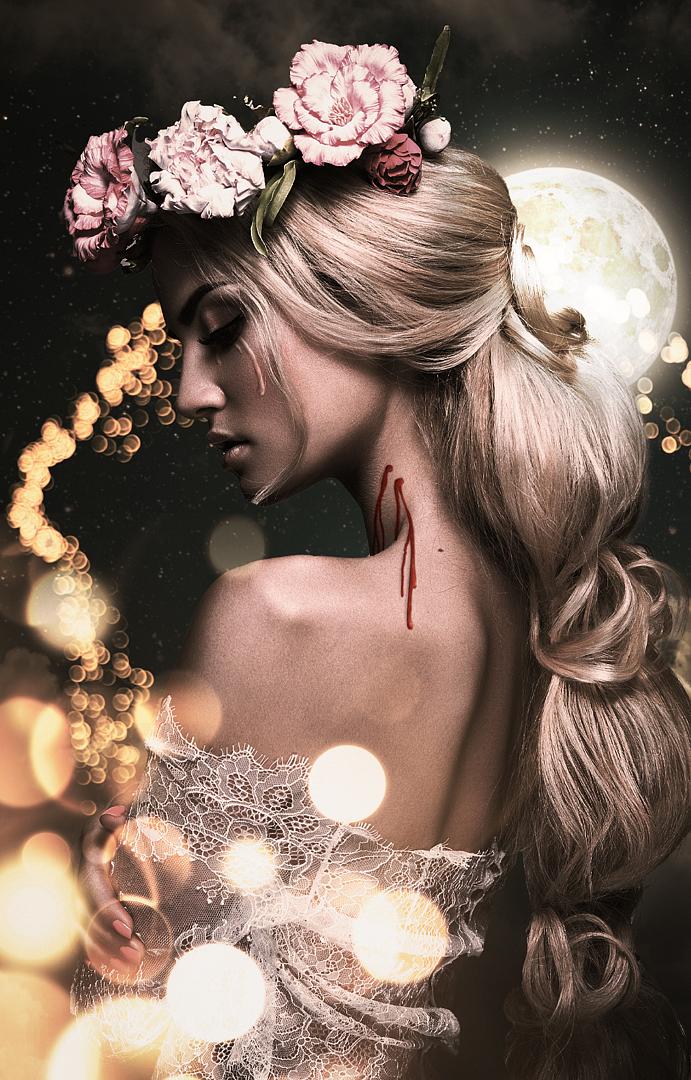 In the Shadow of Midnight

In the Shadow of Midnight: A werewolf princess. A vampire general. When Madeline Vadon and Drystan Heller find themselves tied together in unholy matrimony to end a war, the last thing they expected was to fall in love. But as the new couple uncovers the vampires' plot to undermine a peace agreement, they must band together to protect it—and their union—whatever the costs. Can love truly conquer all?

The war started long before I was born.

Historians argue about which side started it, but at this point no one really cared anymore. All that mattered was gaining an inch over the other side. A year with fewer graves dug than the last was considered a success.

Would this year be a successful one? I couldn’t help but wonder as my handmaiden tightened a silky belt around my waist.

The ivory silk was a notable contrast to my tanned skin. Despite my protests, I couldn’t get away from wearing white on this day. It was tradition to wear white at one’s wedding, after all.

As a young girl, I had dreamed fondly of what my future wedding day might bring. Elated smiles all around and genuine happiness. A true day for celebration. Not the mockery that today would be.

“Whatever comes, sweetheart, remember that you are a princess and your people look to you for guidance. Set an example for them that we can have peace.”

Those were my father’s last words to me, before the journey. He had spoken them in a kind voice in front of his advisers, who were watching like hawks, waiting for their king to take his last breath and wither away.

The growls of my oldest brother drove home how serious this occasion was. Ulric Vadon was going to be the alpha king after our father.

As the heir, he had led this treaty on behalf of the wolves. Throughout the entire journey to the valley where a truce was going to be negotiated, he never relented in reminding me of my place.

“Is our blushing bride ready to meet her mate?” The heavy flap of the tent whooshed open as a wide-shouldered, light-haired alpha strode inside.

“She is almost ready, sir.” My handmaiden, Annie, bowed respectfully to my brother Ransom upon his entrance. “Isn’t she lovely?”

Ransom Vadon had the misfortune of being the alpha king’s youngest son, only a few years older than me. Even as the kindest of my brothers, he still held an air of entitlement that could infuriate one to tears.

My eyes were closed, yet I could feel his presence all the same.

“Madeline Vadon is the loveliest princess this world has ever seen.” Ransom curled his hand over my shoulder.

“I agree, sir,” Annie said, idly straightening up bits of fabric on the dresser. “Hopefully all the world will sing her praise after her bravery today.”

“Yes, sir.” Annie quickly complied, not giving a second to question the sudden change in the air around my brother. I peeked my eyes open just in time to see her slip out of the tent.

I had seconds to glimpse the setting sun over the forest, far in the distance. One moment of freedom in my mind where I was out there running wild and carefree. Then the tent was silent aside from my brother’s growing snarls.

“Say the word, Maddie, and I’ll take you away from here.” Ransom gripped both of my shoulders, spinning me around to face him.

“Just me and you. We can run away into the trees and get away from these vile bloodsuckers before they miss us.”

“Oh, Brother, you say the silliest things sometimes.” I lifted my hand to pat his cheek.

Ransom growled. I heard the beast in him that time. In the blink of an eye, he had snatched my wrist, holding my hand against his face. His lips moved close to my wrist, and I felt his heavy breath against my skin.

“I know you are my brother, and we all have our part to play in ending this war. Father, Ulric, and you are all skilled warriors who have lived through more than enough of your fair share of battles.”

I pulled my hand from his grasp. “My battle will be to marry a man I don’t know.”

“You are not marrying just a man!” he raged. The outburst made my heart lurch.

“I know that, Ransom. He is our enemy. A vampire.” My skin crawled to hear myself say it out loud. However, my fate was sealed.

“This is no mere vampire you’ve been promised to, Maddie,” said Ransom. “Do you know the name of your betrothed?”

I shook my head. “No one deemed it necessary to tell me.”

“The Widowmaker.” His words felt like ice shards slipping down my skin.

“They liken us to beasts because we change shape, but he is the actual monster here. Father and Ulric have agreed to give you to the vampires’ grand general.”

Goosebumps flashed across my skin. My stomach dipped and twisted uncomfortably. All the horrid rumors I’d heard over the years raced to the front of my mind.

“He is just a tale told to frighten children into bed at night,” I said, but my hand was trembling as it covered my mouth. I lowered my gaze to the smattering of mismatched rugs on the ground. “You’re joking with me.”

“You are the bride of the Widowmaker. What does that make you, Madeline?” Ransom was on me again, holding my arms against my sides with frightening ferocity.

“I am Princess Madeline Vadon, and I am going to do my part to end the war.” It was my voice, but those were Ulric’s words. Ransom’s vicious snarl made me clam up.

His claws pressed into the sides of my arms, threatening to rip the fabric of my dress. He skimmed his amber eyes over my body, taking in how the white silk hugged my curves like a second skin.

“We could leave now. They need not know.” My brother’s voice was deceptively calm, but I could feel the strain vibrating through him.

“I would know that I’d abandoned my people. Could you live with that on your conscience?” I snapped back, stepping out of his hold.

The chatter and bustling life outside the tent broke up the silence between us. The tension was rife with anger and something else coming from Ransom. Something I could smell but couldn’t place.

“I’ve killed bloodsuckers for our people for years. Ulric may go into this farce with a smile on his face, but I won’t stand idly by while you’re traded to them—”

Heavy boots and the outside wind interrupted Ransom’s rant. Both of us looked up to the figure standing with us in the tent now.

Ulric was taller and wider than Ransom, with the Vadon amber eyes and a mop of dark golden curls on his head. The black fur cloak slung around his shoulders resembled the fur he sprouted during his change.

“I believe I heard my name from outside.” His eyes locked onto Ransom. “Anything you need to say to me, Brother?”

“Nothing of import, sir.” Ransom pulled his arms behind his back, at once taking the stance of a soldier toward his superior.

“Good.” Ulric’s stern eyes turned to me again and took a meager glance at my wedding dress. A simple tilt of his head was enough approval. “It’s time to go, Sister. Your mate awaits you, as we all do.”

My mate, he called a man who was a stranger to me. A man who I had just been told was the one and only dark monster who killed my kind on the battlefield, known as the Widowmaker. The grand general of the great vampire army.

As if there were a ghost moving through me, I took Ulric’s arm. He guided me from my tent into the chilly night air under a dark sky. The moon in the distance was luminous, though not quite full.

Everyone at the encampment had gone to watch the ceremony with their own eyes and were now waiting for me to take my place at the altar.

My eyes took in the sea of tents. Browns, beiges, and various shades of green to mark the wolf army. Or the emissaries, I should say. We weren’t here for war. We were here to end one.

Across the valley, red and black tents filled my vision. A nasty chill crawled up the length of my spine at the sight. Even when my step faltered, Ulric continued to drag me along, into the awaiting darkness of my future.

Hundreds of wolves and vampires had met on this neutral territory for the occasion. I could see them all now as I crested the hill to the altar at the edge of the woods and the long tent where the feast would be held.

Wolves on my left gave me strength against all the red eyes of the staring vampires on my right. My people were a solid reminder that I was doing this unspeakable thing for them.

I was their princess, and they looked to me now for their future peace. Will I have any peace after this day?

Miniature tea candles lined the path to the altar. The soft flickering lights cast over the crowd, which had stood up at my approach. The arch of the altar smelled of the white winter flowers that decorated it.

In the darkness of the early night, I had to admit to myself that it was quite beautiful.

However, the sight of the man waiting for me made my heart stop beating. Pale skin, cobalt blue eyes, and short black hair. It sickened me that I found him handsome at that first glance.

I had my entire slow walk down the aisle to take him in. Those cold, assessing eyes examined me just the same. His legs were long, and while muscular, his frame was lean. Every bit of him screamed strong and agile.

A predator in the shape of a man. This was to be my husband, my mate, for the rest of my life. Not only a vampire, but the grand general of their army. He’d killed hundreds, if not thousands, of my kind throughout his life.

When Ulric gave me away on behalf of the alpha king and passed my hand over to the icy touch of the vampire, I thought I was going to throw up right then and there.