When the court system failed a small town and put violent offenders back on the streets, a lone vigilante took matters into his own hands. Now, a rookie cop determined to stop a criminal from killing criminals will risk his life and career to do what’s right. 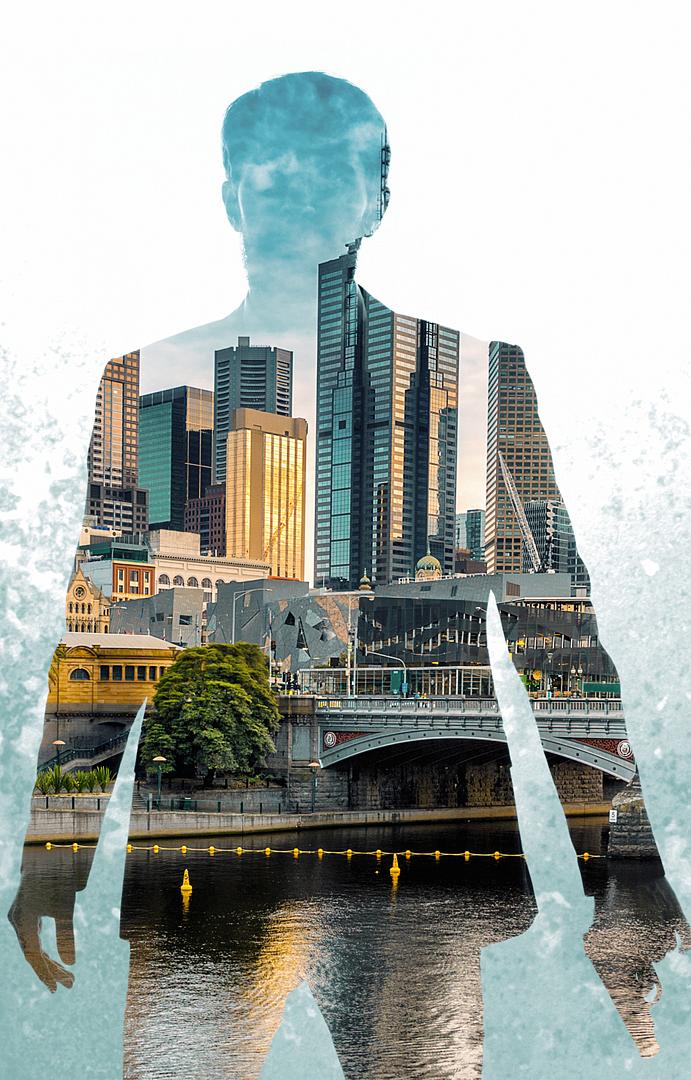 When the court system failed a small town and put violent offenders back on the streets, a lone vigilante took matters into his own hands. Now, a rookie cop determined to stop a criminal from killing criminals will risk his life and career to do what’s right.

The long-awaited moment of truth had arrived. To those involved, it was finally decision time.

The anxious eyes of everyone in Courtroom One were trained on the elderly magistrate as he ambled up the steps to his elevated, oversized Mahogany bench. He had returned from a lengthy adjournment to consider the evidence.

Dressed in a suit, rather than the regal wig and robes worn by his colleagues from higher jurisdictions, the magistrate commanded an almost self-adulated superiority over everyone present in his courtroom.

It was now all about him.

Following what could only be described as a perfunctory bow to all standing for his announced entrance, the magistrate carefully lowered himself into his high-back leather chair.

The small number of eight or so people who had gathered to witness the case did the same and returned to their respective seats.

Down the front of the courtroom, the police prosecutor, the defense lawyer, and his client sat side-by-side at the bar table eyeing the magistrate while he systematically articulated his evidence revision.

Each one waited in anticipation of a favorable verdict.

Meanwhile, watching the case with interest from the back row were courtroom first-timers, Trent Baker, his wife Maureen, and his brother Brad.

Each had endured several hours of evidence presentation and legal arguments, and now they waited with interest for the magistrate’s decision.

Trent fidgeted in his uncomfortable molded plastic chair then glanced at his watch. His impatient eyes flicked to Maureen seated to his left. With a roll of his eyes, Trent slowly shook his head.

He leaned closer to his wife. “Shit, this guy can waffle,” he whispered out the side of his mouth.

His frowning focus returned to the gray-haired magistrate who continued to summarize the facts of the case presented before him.

Sitting in the public gallery of the Geelong Magistrates’ Court was not Trent’s preferred way to spend a Monday morning, especially when the experience cost him one day’s pay. But today, he was happy to make an exception.

Today it was worth it to see justice being served.

It was worth it to witness Brandon Webber—a man Trent had never seen before today—be held accountable for setting fire to their weatherboard home in East Geelong over three months ago.

A satisfied smile filled Trent’s face when, during his protracted summary of the facts, the magistrate mentioned how he considered jail was the appropriate sentence in this case.

Trent exchanged a grin with Brad and Maureen, then relaxed back in his chair.

That’s what he came here hoping to see—a jail sentence. Sure, it didn’t get his fire-destroyed house back, but at least the person responsible would be held accountable.

Trent eyed Webber sitting motionless at the front of the courtroom beside his taxpayer-funded lawyer when the magistrate mentioned how society needed to feel safe from people like Webber.

But not everything was as it seemed.

When the magistrate finally concluded his drawn-out summary and handed down his decision—a two-year suspended sentence, and something about community service—Trent sat upright in his chair.

The satisfied smile wiped from his face. His mouth fell open as his frowning eyes flicked to his wife.

“What does that mean?” Maureen asked.

Trent slowly shook his head, but he didn’t respond. His words choked somewhere deep in his throat.

“It means he got away with it,” Brad said, answering on his brother’s behalf. “He doesn’t have to do any time,” he said in a tone dripping with disappointment.

Maureen’s head snapped to Brad, before springing back to Trent. Her raised eyebrows sought further confirmation from her husband.

Trent didn’t look at Maureen; he couldn’t. Instead, he glared toward the decision-maker at the front of the courtroom.

Every day Trent read the local newspaper and every day his response was the same.

Frustration over news articles that reported on local court cases where serious offenders were released with what appeared to be inadequate penalties and soft sentences.

He never once expected to experience this ineffective justice system firsthand with his own case. After all, his case was far more serious than all those other court cases he’d read about in the newspaper, or so he thought.

When Webber set fire to the back half of their dream home, for no apparent reason, they lost more to the fire than their possessions, and Trent’s beloved pet staffie, Buster.

That night, Trent and Maureen also lost their peace of mind and their sense of comfort and security found from within the sanctuary of one’s own home.

And now, as they sat stunned in the back row of the courtroom, they lost trust in an impotent justice system that failed them as victims of crime.

Despite all the apparent hollow threats of jail by the magistrate in his summation, Webber won’t spend one day inside for his actions. How is that justice?

Amid his slow headshakes, Trent remained fused to his chair as he struggled to understand the decision. His eyes narrowed at the smirking Webber strutting through the courtroom toward the rear door.

At thirty-five, Trent was your stereotypical Aussie tradie. He was a man’s man who had worked as a chippie on building sites since he was seventeen.

He came from a blokes’ environment where they managed their own problems. He was a guy who rarely took a backward step.

So, when Trent noticed the offensive smirk filling Webber’s face as the crook meandered through the courtroom on his way to freedom, it challenged Trent’s self-control.

It took every piece of his being to restrain himself. All he wanted to do was leap from his seat, tackle Webber to the ground, and pound him into oblivion. At least that would be a punishment.

But he couldn’t. Instead, his narrow-eyed, hate-filled glare followed Webber through the courtroom, until the crook disappeared out the courtroom door.

With Webber gone, Trent’s frustrations grew exponentially. He couldn’t believe what just happened. His questioning eyes flicked back to the magistrate, but the old man’s expression was one of apparent disinterest.

It was just another case to him.

Trent was at a loss to understand how the person who burned down over half their home could escape jail. Even the police who arrested Webber had reassured Trent and his wife that Webber would go inside for what he did.

Watching Webber walk out the door a free man, while they, as the victims, still trying to piece their lives back together was too much for Trent.

The restraint he showed moments earlier toward the departing Webber dissipated fast. Trent’s narrowed eyes glared at the magistrate. The contempt he felt for this man grew with every passing beat.

Brad stood from his seat and stretched, then gestured toward the door. “Let’s get out of here, mate,” Brad said in a tone still riddled with disappointment.

Trent didn’t respond. His firm glare remained locked onto the magistrate. The more Trent watched the old man, the more he hated him for what he did. Trent slowly shook his head.

Brad looked toward Maureen, who shrugged and shook her head in response to Brad’s questioning glance.

“Trent…,” Brad said. When there was still no response, Brad rested a hand on Trent’s shoulder. “Trent,” he said with a gentle shake. “Let’s go, mate.”

But Trent’s focus was elsewhere. The volcano of rage building inside him finally succumbed and he erupted. He gritted his teeth in a sneer. He lightly brushed his brother’s arms aside as he leaped to his feet.

“HOW CAN YOU JUST LET HIM WALK OUT OF HERE?” Trent yelled from the rear of the courtroom. “THAT. IS. PATHETIC!”

All eyes in the court turned toward Trent.

The magistrate glowered over the top of his glasses. “Excuse me?” he said to the courtroom protester.

Trent’s eyebrows dipped and his face distorted. He glared at the middle-aged man sitting up on his Ivory tower.

The double standards displayed were obvious to Trent and he had every intention of letting this out-of-touch magistrate know it.

“No. I won’t. I won’t excuse you.” Trent jabbed a finger at the magistrate. “I guarantee if it was your house that arse’ole burned down, he wouldn’t be walking out of here. But because it’s—”

“I warn you to be very careful what you say to me, Sir,” the magistrate said. His glare was fierce.

“Or what?” Trent shouted. “What are ya gonna do? Lock me up?” Trent gestured toward the door through which Webber had recently exited.

“That excuse for a human being burns down my home and you threatened him with jail, but then you just let him walk free. So don’t sit there and threaten me with jail just because I’m telling you how pathetic your decision was.”

“No wonder people in this town think our justice system is stuffed.”

“Sit down and be quiet!” The magistrate barked. “I am not going to ask you again.”

Brad moved in between Trent and the magistrate and placed his hands on Trent’s shoulders.

“I should think so,” the magistrate said. “I suggest you take your friend out of my court before I do something he will regret.”

Brad lifted his hand to the magistrate to reassure him he had it under control. He moved his head closer to Trent.

Trent’s glaring eyes snapped to Brad. The word home was like an accelerant to Trent’s volatile fiery anger. With a roll of his arm, he brushed off Brad’s light grip. His rage affected his common sense.

“Did you hear that?” Trent said as he gestured to Brad. “He just said ‘let’s go home,’”

The veins in his neck and forehead bulged. He had escalated to talking through gritted teeth. Trent jabbed his finger at Brad.

“When he says ‘let’s go home,’ ~he’s~ talking about ~his~ house, not mine. My wife and I are forced to live with my brother because I no longer have a fucken house coz of that prick that you just let walk free.”

“Constable,” the magistrate bellowed to a cop sitting in the rear of the courtroom. The grin on the cop’s face suggested he was enjoying the impromptu outburst at the magistrate, before being summoned.

The magistrate flicked his hand in Trent’s direction. “Take this person into custody for contempt of court. It will give him time to think about the way he is addressing me.”

“Unbelievable.” Trent waved the back of his hand at the magistrate as the approaching cops closed in. “You’re gunna lock me up,” he said shaking his head. “How the hell do you sleep at night?”

Three cops converged on Trent as ordered. One whispered to Trent, “If you know what’s good for you, you’ll shut ya mouth.”

It was friendly advice, not a threat.

With his hands secured behind his back, Trent was escorted from the courtroom to the cells below the police station next door.

Trent offered no resistance to the cop, but his stabbing eyes glared his hate and disapproval at the magistrate, who was in the process of departing the courtroom after ordering a recess.