When a young runaway, Quinn, is bitten by a wolf in the woods, she discovers a world she never knew existed—a world of werewolves. Now Quinn must adjust to her new life in the Shadow Moon Pack, under the guidance of an alluring alpha. 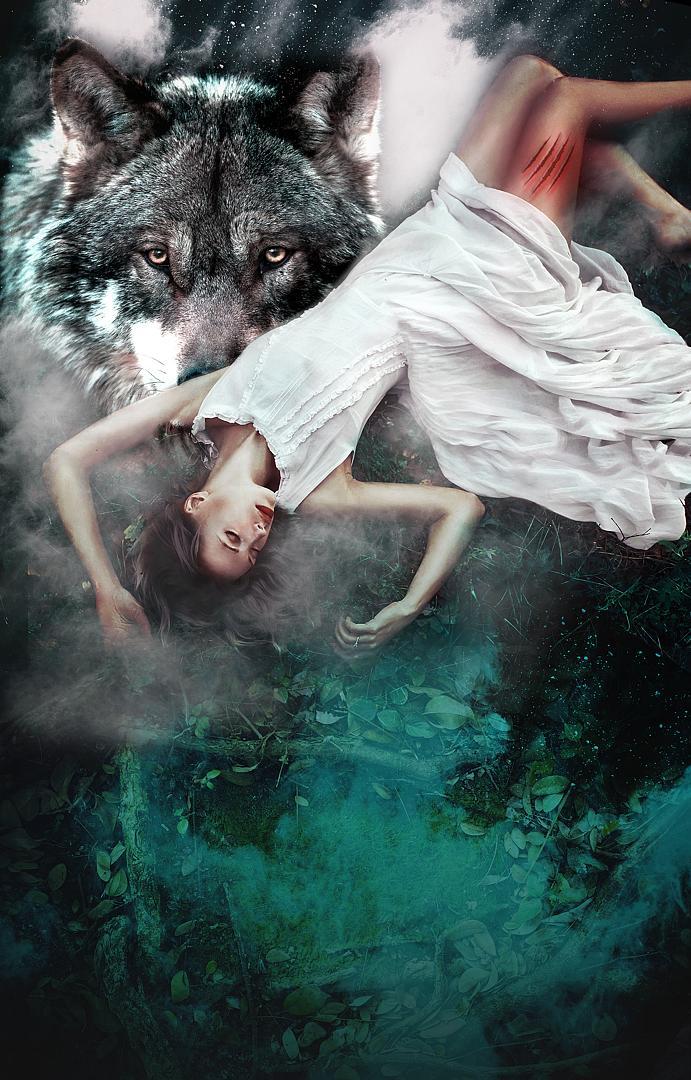 When a young runaway, Quinn, is bitten by a wolf in the woods, she discovers a world she never knew existed—a world of werewolves. Now Quinn must adjust to her new life in the Shadow Moon Pack, under the guidance of an alluring alpha.

1: Lost in the Woods

MomWhere are you??
MomYou should have been home fifteen minutes ago.
MomIt’s going to be dark out soon.
MomI’m going to revoke any going out privileges if you aren’t home in five minutes.
QuinnMom, I’m fine
QuinnI’m just at the library
QuinnI’m coming home now
QuinnJust lost track of time
MomThat’s no excuse.
MomAnything can happen after dark.
MomDo you want to wind up like your Aunt Jodie??
MomGet home this instant.
QuinnI’m sorry, Mom
QuinnI’m on my way
MomKeep your phone out while you’re walking.
MomAnd don’t talk to anyone.
QuinnOf course
QuinnSee you soon

As my mountain of canned food, blankets, batteries, and water bottles traveled down the conveyor belt toward the register, the clerk looked at me suspiciously.

“Just making a donation to the homeless shelter,” I smiled nervously.

Damn, I told my mother I was at the library. If I don’t come back with a book, she’ll know I was lying.

I noticed a faded Agatha Christie paperback mixed in with the magazines and tabloids.

“I’ll take this, too,” I said, throwing it onto the belt.

I paid and stuffed my backpack full of the supplies. I’d have to stash this in a bush before getting back to the house.

Tonight was the night.

I was finally going to do it.

My mother was waiting for me when I returned to our small cottage in the woods.

I clutched my paperback to my chest anxiously.

She narrowed her eyes and tapped her fingers on the oak table.

“This is unacceptable, Quinn.”

“You’re right it won’t. Because you won’t be making any more library trips for the next three weeks,” she said, sternly.

Normally, I’d protest. My trips to the local library were the only thing keeping me sane. My mother practically kept me locked up here.

She homeschooled me till I was eighteen, shutting me off from all outside social activity.

My Aunt Jodie’s disappearance had really shaken her. I was too young to remember it, but my mother hadn’t smiled since.

After tonight, I’d be able to do whatever I wanted.

“You missed supper—it was fifteen minutes ago,” my mother said, coldly. “So you’ll be going to bed without any.”

As my stomach growled, I thought about my stash of canned food in the bushes, but I could hold out for several more hours.

As I began to walk to my room, I heard my mother muttering under her breath, over and over.

“I’m not Aunt Jodie,” I said, but she didn’t respond. She just kept rocking back and forth.

I pulled my covers up. Any minute now, my mother should be—

Right on cue. She opened my creaky bedroom door and peeked in, making sure I was asleep.

After a moment, she closed it shut, locking it with a click.

That was fine—I wouldn’t be leaving through the door.

I threw my covers off and got out of bed, already fully dressed.

I pulled a hollowed-out book from my shelf, which contained a pair of heavy-duty pliers.

I used them to loosen the bolts on my window and quietly lifted it up. Looking down, it wasn’t a far drop, but I didn’t want to risk it.

If running away required one thing, it was working legs.

I tied my sheets together and tossed them out the window, making sure they were firmly looped around my bedpost.

I took one last look at my room, but I didn’t feel any sentiment or nostalgia. It was hard to feel fondly for a prison.

I smacked my flashlight against my palm until it flickered on.

There were woods in every direction. For some reason, my mother felt that being in a remote cottage in the woods was safer, but the isolation only made me feel more vulnerable.

It was dark and disorienting, but I had to start moving.

When my mother discovered I was gone, she’d probably start a manhunt to try and track me down.

I wouldn’t be a prisoner any longer. I’d already sacrificed eighteen years of my life over something that happened to my Aunt, who I barely even knew.

It was time to start living.

I started hoofing it through the woods, hoping to get some distance between me and the cottage before the sun rose.

As I got deeper into the woods, I thought of all the books I’d read of young girls wandering into the forest. Straying from the path.

I thought of my mother’s words…

Anything can happen after dark.

After several hours, I was officially lost. Every tree looked the same. Every step forward may as well have been a step backward.

For all I knew, I was heading back to the cottage.

My heavy pack was weighing me down and my eyelids felt even heavier.

I’d have to find a place to set up camp and sleep at some point.

As I drowsily pushed on, a glimmer of light caught my eye.

I saw long, wavy white-blonde hair disappear behind a tree.

Was this just my imagination, or was someone else actually out here?

As I approached the tree, a female form flitted to another one in the distance.

I could’ve sworn I heard giggling.

I followed the dancing figure as she flitted from one tree to the next, obscuring her face.

She was so graceful and mysterious, her long hair guiding me like a light.

I started to run faster. I needed to know who she was.

Suddenly, she turned around and stared directly at me. She had the most gorgeous face I’d ever seen. And her eyes…

They were the exact same silver-grey color as my own.

I blinked, and in an instant, she was gone. Maybe I really was seeing things.

I found myself in the perfect little clearing. I began to set up camp, spreading blankets on the ground and hanging one over a low branch to form a makeshift tent.

I didn’t know if that woman was real or a figment formed by my lack of sleep and my measly meal of canned beans, but either way, I needed to pass out.

I dozed off, hoping tomorrow would bring me the freedom I yearned for...

I jolted awake at the sound of distant howling—likely a wolf.

It was still dark; I hadn’t slept long.

My eyes were trying to adjust to the darkness as I heard the rustling of leaves in the distance.

I started stuffing everything back in my pack. It was probably best to keep moving. I didn’t know how far away it was, but I didn’t want to find out.

The howling got twice as loud. It was getting closer.

I needed something to defend myself with. I quickly snapped off the nearest tree branch and held it in front of me like a sword.

I desperately wished the mysterious woman would reappear and guide me to safety, but I was on my own.

I started running, haphazardly colliding with branches and bramble. I needed to get out of these woods.

The sound of hefty paws stamping through the crunchy leaves began to echo through the forest.

It was closing in fast.

I tried to pick up my pace, but I tripped on a root and skidded into the dirt.

As I lifted myself to my knees, I saw a big snarling wolf standing right in front of me, drool hanging from its sharp fangs.

A hideous scar ran down the left side of its face.

I grabbed my stick and started to swing it wildly, but it was unfazed.

It lunged at me, but I managed to connect my stick with its nose, and it let out a yelp.

“Stay away!” I screamed, hoping to scare it off.

The wolf’s red eyes narrowed as it started to stalk closer.

I had nowhere to run.

No one to hear me scream.

The wolf pounced on me and pushed me onto my back, its claws digging into my chest.

It growled hungrily at me as if it was feeding on my fear.

Tears began to roll down my face.

I dug my fingernails into the dirt, trying to pull myself away, but the weight of the wolf was too much.

I screamed as the most intense pain I’d ever felt shot through my body.

The wolf had sunk his enormous fangs into my leg.

He let up and wandered off into the darkness, leaving me to bleed out.

I thought wolves usually finished off their prey, but this one didn’t seem to care.

My head began to spin as blood soaked through my jeans.

There was no way I could move. This was where I’d die.

As my vision began to blur, another wolf stepped out of the brush.

This one was even more massive than the other, with ashy-blond fur and hazel eyes, but it wasn’t acting aggressive.

Instead, it nuzzled me as my eyes fluttered shut.