Fawn is a mute, orphaned human living in a world where werewolves and Lycans rule and humans are assigned jobs. When the Alpha King reveals that she’s his mate, her entire life is turned upside down. Will their bond be able to bring the two sides together, or will an unknown evil tear them apart? 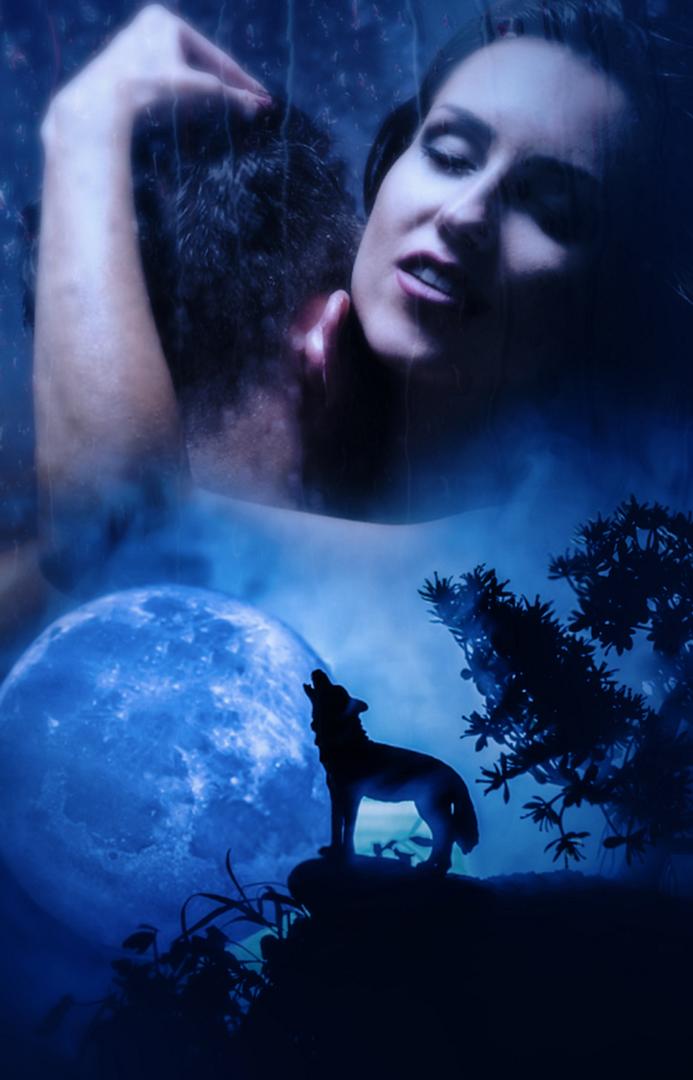 Fawn is a mute, orphaned human living in a world where werewolves and Lycans rule and humans are assigned jobs. When the Alpha King reveals that she’s his mate, her entire life is turned upside down. Will their bond be able to bring the two sides together, or will an unknown evil tear them apart?

I’m running in a forest.

Mud between my frozen toes, lungs burning for air as I push my legs to carry me faster through the branches, adrenaline flooding my veins.

The forest is just as it was last night wet, foggy, and cold but the part that terrified me the most was just how quiet it was.

The quiet air made me feel as though even the rapid beat of my heart would be enough to give up my location, and that at any moment it would come out of the bushes and rip out my throat.

I kept running but this time I heard it.

Tripping over a log and on to my stomach I clutched my eyes closed and screamed as I heard the terrifying sound of it’s heavy feet pounding toward me.

I woke up on the cold damp floor of my one bedroom apartment in a cold sweat doing what would’ve been a scream if I wasn’t born mute.

Quickly I jumped up, stomach growling loudly, and went to the sink in my tiny corner kitchen seeing that it was almost time for work.

The floors were stained,wallpaper torn, no windows leaving the room dark until the lights would automatically flip on.

The only thing worth looking at being the fake plant I found one night on my way home from work.

The smell of mold and old paint is heavy in the air. I quickly pulled my long dark brown hair into a braid leaving baby hairs to frame my hollow face.

Brown tired eyes stared back at me in the cracked mirror hanging above the sink. I wondered who I looked like more between my parents.

Looking behind me longingly at the small refrigerator, I never checked the fridge fighting that strange urge to check it every five minutes as if the food would magically appear.

I only ever had enough money and time after work for an apple and maybe a can of spam all of which I saved for dinner.

I’d have to wait all day until I got home just before nine-thirty PM but at least I’d have food, others weren’t as fortunate.

Licking my chapped lips for the millionth time, I turned to grab my uniform, a small plain white collared dress with two pockets on each side.

Pairing it with my only jacket and flimsy black slip-on, I rushed out the door making sure to lock the three janky locks.

I hated waking up.

Every day I’d rush through the cold wet streets, my head held down afraid of making eye contact, following the cracked sidewalk until I came across the bus stop about two blocks away from my house.

There was no bench, making keeping my tired body up even harder having to wait in the cold. I would sit out there before the sunrise waiting to see the bright headlights of the old city bus come my way.

I’d never known any different though, werewolf guards found me at the border of town in the woods as a baby.

And just like everyone else, I was given a number and then when I was old enough to leave the human orphanage and work, I was assigned a job.

One of the nuns at the orphanage named me Fawn. I guess I was sleeping in the grass when they found me underneath a tree and I was much smaller than the other children.

Werewolves or Lycans had taken over years ago long before I was born. We were taught that this is what we “humans” deserved after years of humans trying to abolish their kind.

Many tried to rebel and all have failed.

Werewolves were much stronger than Humans, though it didn’t help that most were malnourished living off of what the werewolves saw as appropriate human minimum wage.

My town just so happened to be home to the King of all werewolves, the Alpha King, though most of us have never seen him.

He’s said to have lived for many many years purifying the lands of filth or “humans”. Werewolves also outlive humans unless killed which as you can imagine isn’t often.

Their god-like appearances fool everyone around them, seeming to never age.

I’ve heard old-timers who can no longer work roaming the streets talking of the good old days. Sometimes it gives me hope thinking that things may once again be “good”, but they never live long.

Night patrol always drags them off to be killed after curfew, ten PM, no one is out past then unless they have a death wish.

I think they get to a point where they don’t care, they all seem so happy. I wish I could be that naive enough to ignore my terrible surroundings.

The bus finally pulls up and I’m shoved in as late risers try to hurry into the bus.

Sliding my ID card through the machine waiting for the obnoxious beep to screech in approval, I then walk to the back of the bus and watch out the window until the final stop.

Seeing everyone quietly conversing amongst themselves in temporary bliss made my heart feel like someone was squeezing it. I was ashamed to admit it but I envied them.

I had a friend once that I often thought about, Melissa Froth. She used to work with me at the castle, she was like a sister to me although she was much older, maybe in her thirties or early forties.

We would help each other with chores and make the day seem to fly by.

Until one day, she snuck out past curfew to meet with a man who worked at the local fish market.

I don’t know what she had planned that night but the next day she wasn’t on the bus and I never saw her again. She would never purposely leave me though, I’m sure of it.

She was immediately replaced that day as if nothing happened.

To the beasts, we were all replaceable, we held no real value other than to work until our bodies eventually gave out.

My hands started to shake with uneasiness, I could only imagine how easy it would be to simply toss out someone who couldn’t even speak.

I was ok with being alone before her, I knew trying to communicate with me could be a hassle but now being so completely alone hurt more than ever.

In a way, I’m glad I had my work to keep me busy and tire my body to ensure I fall asleep at night. I had too many painful thoughts keeping me up without it.

I was awoken from my train of thought as the bus pushed forward to a hard stop slamming its doors open. The Werewolf bus driver roughly yelled over the speaker for us to get out.

I got up, squeezing past everyone, ignoring the dirty looks until I was finally out into the cold open air on my way to the palace.

The sun rising behind the castle never failed to take my breath away.

This job was god-sent, I had a thing for cleaning and it was one of the more doable human jobs for someone like me. This small window of time was my favorite part of the day.

Walking up a long set of stairs through the back entrance that only the maids used, I came across my section.

The smell of cinnamon rolls and bacon filled the air passing by the kitchen making my stomach growl loudly. I quickly ran straight to work in the East wing that was reserved for the Alpha King’s guests.

Scrubbing a stubborn spot in one of the suite’s bathrooms, I stop for a second to wipe the sweat off my forehead and give my lungs a break from all the chemicals.

Taking a deep breath, looking up, I jumped back a little as the head maid Dana stood above me.

Dana was never a nice lady but she got the job done and had a way with words making anyone snap into shape instantly.

For some reason, I always felt like she was a piece of something I wanted to be, strong.

Her fluffy reddish-grey hair was always done up as high as she could get it, maybe attempting to seem more tall and intimidating. If that was even humanly possible.

Her uniform needed to be a few sizes bigger as the front buttons barely kept it together, thank the heavens she wore an undershirt.

Smoothing out her uniform with her large hands she eyes me up and down her large figure shadowing my mere height of five feet easily. Shaking my head quickly she instantly rolls her eyes.

“Don’t bother lying, you don’t get paid to lounge around, Fawn. You should be grateful to have this job. A mouse-like you wouldn’t last a minute doing real labor, you’d do well to remember that, human.”

“No matter, you’re needed as a replacement in the West wing. Someone else will finish this later before anyone noteworthy arrives.”

As soon as the words came out of her mouth my ears started to ring, my palms becoming wet and shaky. The West Wing is where the Alpha King stayed. The one and only beast of my night terrors.

I didn’t want to know why a replacement was needed, only how to dig myself a hole big enough to hide me forever in the neat carpet beneath my feet.

I was yanked up and roughly shoved out of the room. Making a motion with my hands back to the room Dana waves it off quickly.

“No no, you leave the supplies there, nice try mouse, they’ll be plenty more there don’t you worry.”

Dana’s raspy laughs tumble out as she shoves harder, almost landing me face-first on the ground.

“Now hurry along, we haven’t got all day.”

My stomach started churning and tears started forming in my eyes thinking about possibly being in the same room as such a beast.

What would happen if he didn’t like the way I cleaned the rooms? What if he punished me? What if I disappeared like Melissa?

Twisting my uniform in my hands until they turned colors, I kept my head down, there was no way I was getting out of this unscathed. I felt deep in my gut that this wasn’t going to end well for me.