Mated to the Werewolf King

Towering over him was a grinning demon…the Demon Lord. He pointed at me with a long, black, spindly finger... 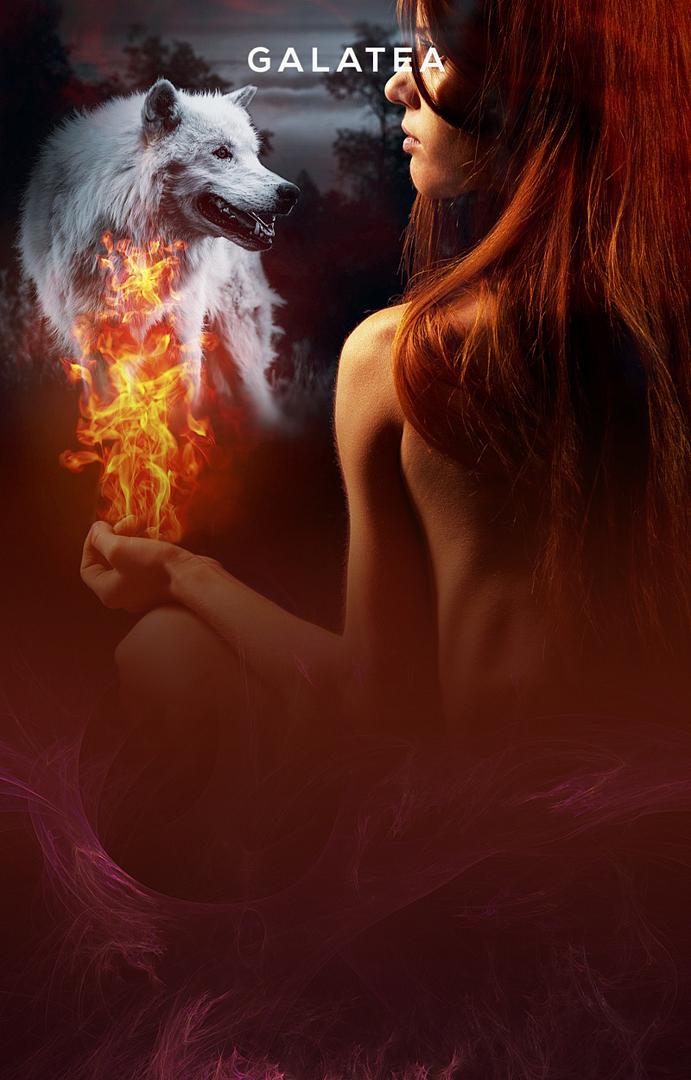 Mated to the Werewolf King

Towering over him was a grinning demon…the Demon Lord. He pointed at me with a long, black, spindly finger...

Towering over him was a grinning demon…the Demon Lord. He pointed at me with a long, black, spindly finger.

“You’re mine now,” he croaked, fire spitting from his mouth. “Annabelle…my princess of darkness…”

I fell to my knees and cried out in anguish. But as the tears trailed down my cheeks, I felt them…bubbling…boiling…melting through my skin. I shrieked, tearing at my face, trying to make it stop.

But there was no stopping what I was becoming now. I heard the Demon King’s cackling laugh as my tears became black scars, my eyes voids, my lips…that would never know the taste of his again…the Werewolf King I loved…

The world was lost… Only darkness ruled now…

I woke up with a start, shaking, hyperventilating, but the world was still dark.

I realized I was wearing an eye mask, and as soon I pulled it off, I could see I was safe and sound in my chambers. Phew.

That damn dream again. It’d been recurring for weeks. But every time I woke up, I couldn’t remember a single detail. Only the terror, the dread, the feeling that something big was coming. But what?

A heavy knock at the door made me jump.

I turned to see my father. That was all. Get a grip, Belle, I scolded myself.

“There’s something important we need to discuss.”

He came and sat down on my bed. My father was the alpha of our pack, built like a brick wall, but with a quiet kindness in his brown eyes that couldn’t be rivaled. He was fiercely devoted to his family, which is why what he said next shocked me to my core.

“Anabelle,” he said, eyes lowering. “I don’t know how to say this, but it’s time for you to leave the pack behind.”

My eyes widened. “What?”

“Your mother and I are sending you somewhere…safe. Warm. Far away from here.”

“What are you talking about?” I said, standing up, backing away. “This is my home! I can’t leave the pack. I belong—”

“You belong where I say you belong!” he bellowed, and I was struck quiet.

My father rarely raised his voice. That meant this was serious. It meant that he, the alpha of our pack, was scared of something. But…what?

“Why…why are you doing this?” I asked, and now tears filled my eyes.

I thought of my brother, Sean, my best friends, Joshua and Danny, and most of all, of Gregory, the man I believed I was destined to be with. How was I ever going to live without them? What was happening? My world was slipping from beneath my feet.

“I can’t explain,” Dad said. “But you must understand, Annabelle. It’s for your own protection.”

Protection from what? Was this related to that damn dream? If only I could remember the details. But I wasn’t scared of it…whatever ~it~ was. No. This was my home. And nothing, nobody, was going to take that away from me.

“Annabelle,” my father said, seeing the wheels turning in my head. “Don’t—”

And before he knew what was happening, I ran from the room, out of the house, and into the woods as fast as my feet could take me.

I was running for my life. In the distance, I could hear my father’s booming voice. “Come back here, Annabelle!”

But no way was I stopping now. I shifted and felt the familiar warmth seep into my skin. My limbs stretching, a pelt of reddish fur emerging from my body, covering me like a thick blanket.

Now on all fours, I sped toward my secret spot in the forest. I discovered it when I was much younger. Sean, my big brother, had teased me relentlessly, leading me to flee into the forest in tears.

“You’re not my sister!” he shouted. “Go back where you came from!” He was five years my senior, and all I’d ever wanted was to be loved by him.

That night, I stumbled exhausted into the clearing, but the full moon looked down on me, blinding me with its fluorescent majesty. It spoke to me silently, soothing my worries. It was my secret friend when I was lost in the darkness.

I was running there now, hoping to find the same solace and comfort I first felt those thirteen years ago. Being sent away meant I would have to leave behind my special clearing, too. I couldn’t bear the thought.

Where could I turn? Where could I be alone? Oh, dear Moon Goddess, don’t let this be my fate. Don’t let my father send me away!

“Belle, stop! Wait for me,” hollered Sean. Time had done much to resolve our differences, making us close now. I knew he cared, but something inside me refused to let my legs stop running. I needed to be away from everyone.

I heard him shift behind me, his large six-foot-ten-inch frame morphing into a massive grey wolf that was just as quick as it was strong. He would catch up with my small, weak wolf at any moment.

When I first shifted at fifteen, I thought my wolf would get bigger, but it never did. Unlike the rest of my family, my wolf remained small and scrawny.

Which made me easier to catch.

Sean’s wolf jumped on my back, pinning me to the dirt. I tried to wriggle free, nipping at his legs, but it was no use. Sean snarled and dug his nails into my pelt.

Relenting under the pain, I morphed back to my human form and he let me get up. One upside to being an undersized wolf? I was the only one in the pack who could keep my clothes on while shifting.

“We need to talk”, Sean said, putting on his shirt.

“I can’t believe you’re on his side,” I shot back. “For the Moon Goddess’s sake, will you tell me what the hell’s going on?”

Sean looked away. I knew it must be something serious. He wasn’t one to avoid confrontation. In fact, he had quite the reputation in the pack for knocking out anyone who looked at him wrong. Or any poor guy who looked at me, for that matter.

“He’s coming for you, Belle,” Sean said quietly. “He knows where you are. You can’t be here when you turn eighteen.”

“That’s not for me to say. If Dad didn’t think you should know…”

“It’s my life, Sean!” I shouted. “I deserve to know if someone’s after me. Please? Tell me. Who is it? Who’s coming for me? Is it another alpha?”

“Something else? What do you mean? There isn’t anything else. Just humans and werewolves.”

I felt like the world I knew and loved was falling apart and not even my secret clearing could protect me from what was coming next.

“Look, do you remember that day you ran away in the forest because I was taunting you, and no one could find you all day, and Mom went ballistic?”

“And then you were grounded for a week?” I replied. “Yes, of course. I hated you that day.”

“Sure, I would have, too,” Sean said impatiently, as if I was keeping him from making his point. “But, do you remember what I was saying before you took off?”

“You said…you said that no one loved me, and Mom and Dad were lying to me. You were a real jerk back then, you know that? You made my life a living hell.”

“I also said, you were found at the Pack border.”

“Whatever. That’s the same stupid joke every older brother makes. What does it matter?” But my body betrayed my true feelings. I could feel my heart pounding fiercely in my ribcage. A revelation was coming—I could feel it.

Sean looked at me with heavy eyes and let out a deep sigh. “That wasn’t a joke, Belle.”

I silently pleaded for him to smirk or wink, anything to indicate he was just pulling my leg. Instead, his face remained solemn.

“I remember one night, Dad came back with a bundle in his arms, and he and Mom argued. I had never heard them argue like that. So, I got closer and started to eavesdrop. Mom wanted to keep you, but Dad was worried.

“He kept saying, there must be more to the story. He said somebody was going to come back for you one day. I rushed downstairs to see what they were talking about. And that’s when I first saw you, bundled in that blanket. You were so small and fragile, Belle.

“That’s why I was angry for so long. I was scared to love you because I thought you might be taken from us, and I couldn’t bear the thought of losing my little sister. It took me a while to realize, it didn’t matter if someone came, because they weren’t your family. We were your family.”

It was too much to process all at once. I didn’t know where to begin. I looked at my brother, my protector, my friend. This was tearing him apart from the inside.

“That's why you’re so over-protective?” I asked.

“I can’t help it,” he said, nodding. “I promised I’d never let anything bad happen to you. That’s why you have to come back home with me, all right?”

Sean sighed, looking down. I knew the answers were imminent, though, I suspected, they weren’t going to make anything clearer.

“Last week, an ultimatum was issued to the King. It said to hand you over or else war would be declared on all werewolves.”

“The King? A war?” I stammered. “What could that possibly have to do with me?”

“Belle,” Sean said, holding me firmly. “We don’t know much. But we know he’s a ruler of all his kind. We know he’s called…the Demon Lord.”

A flash of horrifying imagery struck me silent. A black, spindly finger pointed right at me. A fiery, cackling mouth. The dream.

That was who I’d dreamt of. The Demon Lord.

“I wish I knew more,” Sean said. “All we know is, he’s incredibly dangerous. And he’s willing to go to war if it means getting you back.”

I choked for breath, my hands clammy. I felt like I was suffocating.

“Belle…” Sean said, looking into my eyes. “I think you’re…I think that’s where you came from. You belong to him.”

I took a shaky step back, eyes widening, hyperventilating. Everything started to blur, and it felt like my body was weightless. I was falling.

And now, I could hear his voice again…the voice from my dream…

“Annabelle, my princess of darkness…”

Sean’s voice was screaming; he was trying to reach me. But he was too far. It was too late. My secret clearing, illuminated by the moon, was drowning in darkness, the stars blinking out, one by one.

And as all went black…as the world ended around me…all I could see was the other man from my dream, the Werewolf King, lying in a pool of his own blood.

And then there was nothing but darkness.