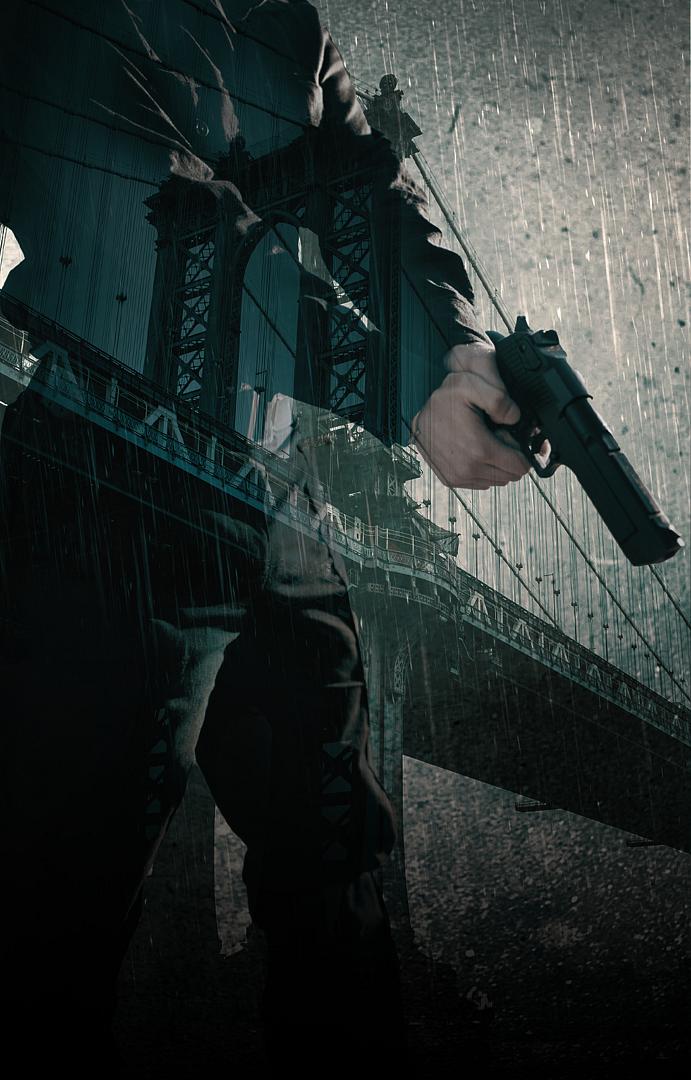 Luke Fox lounged across his workstation with his hand supporting his head while he re-read over all the evidence from his three active murder cases.

He desperately hoped something would jump out at him from the pages, but there was nothing. He continually kept coming up empty.

Normally, he would have already established firm leads on a suspect, or better still, wrapped up these cases by now.

But all three remained unsolved with no suspects or any likelihood of arrests in the near future.

That was a fact not lost on his lieutenant.

Luke’s head snapped up from his reading. Husken’s head poked out from his office door. He beckoned toward Luke. “My office,” Husken said, then retreated into his office.

The stern-faced lieutenant stood at his side of the desk when Luke entered. He gestured to the visitor’s chair. “Sit,” he directed.

Luke slid into the chair and watched Husken take his seat.

Three files sat neatly at the side of Husken’s desk. He slid them closer and opened the top file. After a short read, his eyes lifted to Luke. “Claire O’ Connor,” Husken said.

Luke nodded. He knew where this was heading.

“The journalist found murdered in her Brooklyn hotel room,” Husken continued. “Where are we at with that…? It’s been over ten weeks.”

Luke edged himself to the front of his chair and rested his elbows on the desk. He slowly shook his head.

“Still the same, boss. I keep coming up empty on that one,” Luke said. “No witnesses. No trace evidence. There is nothing because it all took place in the confines of a hotel room.”

“The room had been wiped down afterward. Evidence had been removed from the room. I checked the hotel security footage and—”

Husken held up a hand at Luke. “I’m aware of all that.” Husken gestured to the file. “I’m asking if you have anything new…any new leads to identify the killer.”

Luke shrugged. His head bowed. He rubbed a hand across his mouth. “I got nothing,” was all he offered.

Husken glared at Luke, clearly dissatisfied with the response. He closed the folder, then opened the second folder and read from it.

“John Bishop, found shot and killed in his car in DUMBO six weeks ago.” Husken’s eyes lifted to Luke. His glare was as clear as any spoken word.

Luke couldn’t hold the lieutenant’s glare. His eyes dropped. It pained him that he also had nothing. “I suspect the killer was from the Projects, but no one is talking down there,” Luke said.

“Got a weapon? Got a witness? Got a suspect? Got anything?”

Luke shook his head. “Nothing.”

Husken sighed. He closed the folder and opened the third folder. “Linda Fulton. This is now over three weeks old,” Husken said.

Luke fell back in his chair. “I liked the husband, but he has since been cleared. The husband claimed to have disturbed the offender who fled and we’ve got nothin’, not even a description.”

Husken closed the file and clasped his hands together on the desk. He stared across at Luke, allowing a moment of silence to pass by.

“Bullshit,” Husken snapped. “You’re not in a slump. You’re a shadow of your former self.” Husken flicked the back of his hand at Luke. “You’re letting this broad affect your life.”

Husken glared at Luke. “So she walked out on you…get over it. Mix some cement in your morning coffee or something and harden up.”

“It’s not that easy, boss. Eight years we were together… Eight years,” Luke said.

“We were planning to get married and everything. Then, out of the blue, she dumps me. She gives me the old it’s-not-you-it’s-me speech.”

“Frankly, Fox, I don’t give a shit,” Husken said. “All I care about is the clearance rate of your cases. You have gone from one of my best detectives to… I don’t know what you are now.”

Husken shook his head. He glared at Luke’s bowed head. “If you’re not up to it, say now.

“If you don’t think you’ve got what it takes anymore to be a detective, just say the word and I’ll re-assign the cases. I need results and I can’t wait until you get your shit together.”

“Do you? Do you really? I’m not seeing any evidence of that. All I’m seeing is someone who was once an A-Grade investigator is now…this.” He flicked his hand at Luke.

“I remember we talked a while back after you solved that North Brooklyn murder about how you were chasing promotion to detective, second grade. Back then, I’d have said you were a shoo-in.

“But now, I’m not even sure you are worthy of carrying a gold shield.”

Luke didn’t respond. His head dropped and his shoulders slumped. He had nothing to offer in his defense. He navel gazed while Husken continued.

“You need to show me that you are able to put all that personal stuff behind you and focus on your work. You need to move on.

“You need to get me results; otherwise, your position as a detective will come under further scrutiny and review, and based on what you’ve shown me so far, it could very well be considered untenable.

“You won’t have to worry about getting that promotion…you’ll no longer be a detective. Can I make myself any clearer?”

Luke shook his lowered head. This was all new to him. He had never been on the receiving end of such a stern dressing down that challenged his work ethic.

Since becoming a detective and joining the 84th Precinct six years ago, Luke had one goal: to be promoted to detective, second grade. He’d worked hard to achieve the results required to be considered.

But not only did his promotion look lost, he learned that he could be busted back to uniform unless he could turn things around. To a competitive high achiever like Luke, that was devastating.

A knock on the lieutenant’s office door broke the extended silence and Luke’s self-pity wallowing. One of Luke’s detective colleagues entered the office.

“We’ve just had a report of a young girl that’s gone missing in Boerum Hill. Mother found the front door ajar when she woke this morning. When she checked on her daughter, she wasn’t in her bed…”

“Ah, eight. Suspected abduction. The first responders are calling for a detective to attend. Who do you want to send?”

Husken rubbed a thoughtful hand across his chin. His eyes flicked to Luke. Several seconds of silence passed by while he regarded Luke. His eyes narrowed.

Luke’s eyebrows arched. His mouth fell open. “But I’ve already got three on my plate, boss. We’ve just talked about the difficulties I am having with them.”

“I am aware of that,” Husken said. “This is a fresh case, a fresh start, and quite frankly, it will be your last chance to show me you still have what it takes.”

Husken held Luke’s gaze. “Solve this one, and do it quickly. Prove me wrong. The ball’s in your court, son. Don’t let me down…but more importantly, don’t let yourself down.”

Husken flicked his hand toward the door. “That’ll be all.”

Luke pushed himself from his seat and stood. He eyed the lieutenant unfavorably before turning and exiting the office.

How the hell am I going to fit this one into my workload, he wondered as he ambled back to his desk.

Luke sat at his desk reviewing his case files. It had been ten days since Husken gave him his last chance ultimatum and, while that was not a lengthy time frame, he should've had something by now.

But he had nothing. He was no closer to solving this latest case, let alone the other three he already had on his books.

The stress and pressures of the day’s work combined with the lack of physical activity from having sat at his desk most of the day finally started to take its toll.

He struggled to remain focused. He fought to keep his eyes open.

Luke checked the time. It was 9.45 p.m. His helpless gaze dropped back to the reams of records and statements spread across his desk. He exhaled as he shook a frustrated head at what he saw.

Luke sat back in his chair and locked his fingers behind his head. He lifted his weary eyes and stared blankly at the ceiling.

After fourteen hours straight Luke decided he'd had enough for the day and quickly cleared his desk of all the records and documents in preparation to head home.

Luke secured his case files away and made his way out of the building, leaving only the cleaning staff behind.

With hands buried deep into his pockets, he stood momentarily on the street before he opted to head to nearby Barnaby’s Barfor a well-earned nightcap or three.

The fresh air from the short stroll failed to distract Luke from his troubled thoughts and worries, but he arrived at Barnaby’s with a hard-earned thirst.

The affable barman, Benny stood at the door end of the bar polishing glasses when Luke arrived. He greeted Luke when he entered.

“Hey, here he is,” Benny said, shifting his focus toward Luke entering from the street.

“How are you this evening, Detective?” Benny sounded genuinely interested, rather than offering a standard banal greeting.

Typical of a cop, Luke scanned the bar patronage as he entered, assessing the clientele in attendance. The bar was unusually quiet, although it was getting late.

“Now, thirsty I can help you with, Detective,” Benny said, punctuating his comment with a finger point. He smiled his trademark grin that illuminated his entire face.

“You missed everyone earlier,” Benny said as set up a glass and collected a bottle from the back of the bar. “I think they’ve all gone now,” he said with a quick check toward the rear of the room.

“There were quite a few of ’em in,” he said as he poured Luke a shot of his preferred poison—Jack Daniels, straight up.

On most nights after five, the detectives from the 84th could be found occupying the booths located toward the darker, more private rear corner of the room, sharing a post-shift drink.

The booths they regularly occupied were affectionately referred to by the regular patrons as The Cop’s Cave.

As soon as Benny finished pouring, Luke picked up his first drink and with a flick of his head, emptied the contents before replacing the glass on the bar.

“Keep ‘em coming, Benny.” He slapped his open hand on the bar.

“More like a tough month, I’d say,” Luke said as he watched his next round being poured. “Set me up with another six of these. That’ll do for a start.”

Luke jabbed his thumb toward the rear of the room. “I’ll take them down the back. Just bring them down to me when you’re ready, Benny, thanks.”

Luke scooped up his freshly poured drink and made his way to his usual spot in the rear corner—down in The Cave.