Cora’s estranged father leaves her a massive inheritance, but there’s a catch! She has to maintain his ranch in the middle of nowhere for a full year. A city girl in a small town, she couldn’t feel more out of place. But when she meets Hael, the sexy cowboy who works on her ranch, country life gets a lot more exciting... 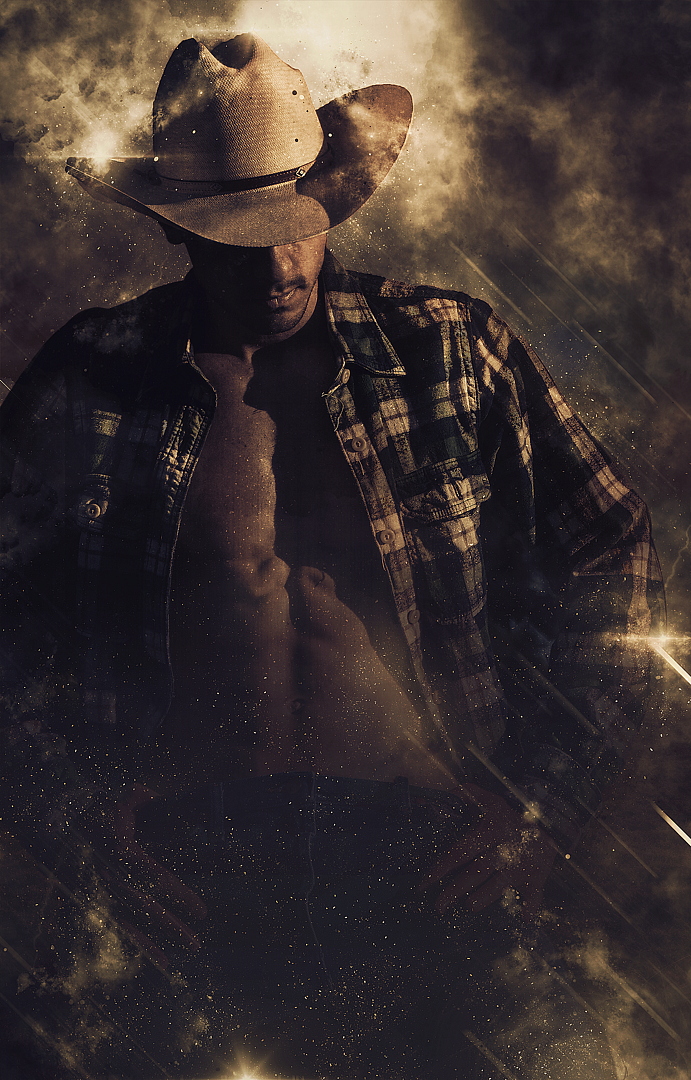 Cora’s estranged father leaves her a massive inheritance, but there’s a catch! She has to maintain his ranch in the middle of nowhere for a full year. A city girl in a small town, she couldn’t feel more out of place. But when she meets Hael, the sexy cowboy who works on her ranch, country life gets a lot more exciting...

I held the black and magenta box in my hands. Sexy yet sleek packaging.

Opening the box of a new toy always felt like Christmas.

I perused the instruction booklet.

I inserted the AA batteries.

Charging convenience: 5 out of 10

I dimmed the lights, crawled onto my bed, and I was ready to go… pun intended.

My phone began buzzing on my bedside table, but I did my best to ignore it, letting it go to voicemail.

Turning things up a bit on the settings dial, I felt the inner wand go from pulsing vibrations to full circular motions inside me.

I let out a low moan as my inner walls clenched around the toy. My breaths became shorter and more intense.

Once again my phone buzzed obnoxiously beside me.

Closing my eyes, I did my best to ignore the noise of the phone, images of the glistening abs and big hands of the members of my celebrity fuck list dancing through my head.

Finally, I dialed the toy all the way to the maximum setting and euphoric waves began pulsing through my body.

“Ooooh shit!” I said to the ceiling. I was close.

And the phone buzzed again.

My annoyance won out over my body, and my impending climax died a quick, pathetic death.

If finally answering the unknown number was what it took to stop the incessant calls while I was trying to get off, then so be it.

“Hello!” I was out of breath and pissed.

“Good evening. My name is Mr. Charles Winston, Attorney at Law. Am I speaking with Cora Braelynn?”

I thought I was well past this shit. My divorce was finalized six months before, and my cheating asshole ex got everything he wanted.

I barely got out of that hell of a marriage with my own car and the little bit of dignity I had left.

“Ms. Braelynn,” the lawyer’s voice continued, “I’m sorry to inform you, but your father, Gregory Austin, has passed away.”

Greg Austin. That was a name I hadn’t thought about in years. My father. At least that was what it said on my birth certificate.

“As the executor of his estate, it is my duty to inform you of the assets left to you, including his country home.

“Whoa!” I interjected. “I’m sorry, but I barely knew the man. You’re saying he lived in the middle of bumfuck nowhere with cows and shit?”

My mind was reeling. I hadn’t heard from the asswipe since I was eighteen years old when he showed up to my high school graduation unannounced trying to “reconnect” with his only child.

The lawyer had the audacity to laugh over the phone. “Yes, Ms. Braelynn. And might I say, you definitely resemble your father in his colorful use of the English language.”

“Mr. Charles Winston… Look, whatever that dickhead left me I have no use for, so you can just give it all back to the bank.”

“Ms. Braelynn, the property is fully paid off, and his bank accounts are just waiting to be signed over to you.

“If you will just come down to Cedar Ranch, your father’s property in Flake Wood Falls, we can get everything transferred into your name.”

CoraReception out here fucking blows.
JuneR u at the ranch yet?
CoraTrying to find the road to turn on but my maps app is failing me. This place is a black hole.
JuneBitch are you driving and texting?
CoraLike 5 mph! I literally only saw 1 traffic light in the whole backwards town
JuneLol! Missing city life already?
CoraEverything smells like cow shit
CoraHow are things around the office?
JuneNot bad. About to take a look at your Pink Panther review.
CoraSorry if it seems rushed! I can make edits.
JuneI’m sure it’s fine. 😉
CoraOh thank fuck! I think I found the road!
CoraTtyl

After twelve hours and seventeen minutes of driving and a steady diet of energy drinks and gas station food, I pulled up to Cedar Ranch in Flake Wood Falls, population 1,223. It was just before dusk.

The property was surrounded by acres of pasture, and the backdrop of the setting sun above the gently rolling hills was nothing short of breathtaking.

I drove the final trek up a long dirt driveway and parked next to a dark, shiny minivan. A tall, gray-haired man stepped out of the driver’s side, slamming the door with a smile.

“Ms. Braelynn, I’m so glad you could make it,” said Mr. Charles Winston, as he insisted on being called.

“No problem at all, Ms. Braelynn... Wow, you are the spitting image of your father.”

I knew I shared more features with him than with my petite, blonde mother. I was tall-ish with black hair, green eyes, and more than a few curves.

My mother had never been an overly affectionate woman toward anyone, but I always figured it was my resemblance to Greg that led her to be somewhat cold, even to me.

She didn’t speak of him often, but what she did reveal was that he abandoned her after she became pregnant with me.

Needless to say, her hatred for my father was something she could never keep hidden, and I didn’t feel the need to open old wounds by telling her what I was up to on this trip.

“Well,” said Mr. Charles Winston, “shall we go over these papers inside?”

As I climbed the stairs to the front porch, I saw two border collies nestled in the corner.

“Your dogs, now. That’s Cain and Dell. They’ve been pretty down since your father passed, but I’m sure having you here will perk them up in no time,” said Mr. Winston.

“Oh, uh, I wasn’t really expecting... Do they need to, like, be walked on a schedule or something?”

He chuckled as he unlocked the front door. “No leashes needed out here. Just let them outside during the day. Welcome to your new country home,” he said as the door swung open.

I was worried I’d be faced with a bunch of beheaded animals hanging on the wall, but I was pleasantly surprised.

The place was quaint, not overstated or too masculine. The open-concept kitchen was spacious and modern.

The living room was large and comfortable looking with plush light leather couches and brown and white cow skin rugs littering the room.

The two sad dogs trudged over to lay in front of a newly remodeled fireplace, which sat perpendicular to a huge bay window overlooking the oncoming sunset.

It looked like a chic lodge, not your typical idea of a place out in the sticks.

“Your father completely remodeled a couple of years back,” Mr. Charles Winston continued. “Right after the cancer diagnosis. I think the idea was to make a nice home for you.”

The statement made me want to roll my eyes. When the hell had that man ever done anything with me in mind?

“It’s lovely, but I’m just here to sign all the stuff so I can sell it,” I stated flatly.

“Oh... well, let me take you through the fine details of the will before you start making plans to sell. Your father has left specific instructions on how to care for his legacy.”

He took a seat on an armchair as he began pulling files out and laying them on the coffee table. “You see, Ms. Braelynn, there is just one catch to obtaining the deed to this place.”

“Which is?” I asked, taking a seat on the couch.

“Well, the bank account is yours. All you have to do is go into town with the appropriate identification and paperwork.

“But if you’ll turn to the final page of the will, you’ll see that there’s an occupancy clause on the house and land.”

“Occupancy clause?” I furrowed my brow.

“Your father entrusted my office with the deed to the land until after you’ve lived here and taken care of the ranch for twelve months.

“After that time, the property is yours to sell or keep.”

“Yes. Twelve months. Without an extended absence from the ranch. It’s part of the guidelines that I visit every few weeks to see that the house, property, and livestock are being adequately cared for.”

“Work is expecting me back in two weeks! I can’t just up and leave my job!”

“It’s entirely up to you, Ms. Braelynn. But this land is worth more than most people’s property in this county combined, and ownership of these assets would allow you to be an exceedingly wealthy woman.

“I suggest taking a few minutes to think it over. Why don’t I take you out for a look at the property while there’s still some daylight left?”

I absently nodded my head. Leaving the paperwork on the coffee table, I followed Mr. Charles Winston out the back sliding glass door.

Outside, crickets had begun to chirp. Across a wooden fence, a couple of horses nibbled at a hay feeder.

“There are more horses in the stable. A dozen or so, total.”

As we walked around the property, Mr. Charles Winston pointed out some expensive farm equipment before taking me over to view the pasture where cattle were moving together as a herd.

Fireflies had started to twinkle all over the pasture as the sun set in the background over the rolling hills. It was a beautiful sight. I couldn’t deny that.

But me? Responsible for all this?

“Look, Mr. Charles Winston, I don’t know a thing about taking care of a ranch. Or animals. Or any of this shit!”

Just then, I saw a figure on horseback emerge behind the cattle with a short-haired dog alongside, guiding the herd. As they got closer, the figure—a tall, muscular Adonis of a man in a cowboy hat—swung his leg over to dismount from his black horse.

He pulled a gate to the section of the pasture closed once all the cattle had made their way through and wiped the sweat from his prominent brow.

The guy was sexy.

Sure, my self-inflicted abstinence likely helped ignite the tingling sensation between my legs, but in my twenty-seven years, I don’t think I’d ever seen a sight more mouth-watering.

Trying not to let my eyes rest too long on his perfectly sculpted, Levi-clad ass, I picked my jaw up off the ground and asked, “Who’s that?”

“Oh, that’s Hael. He’ll be working here for you, along with a couple of others.”

The sexy cowboy looked up, met my eyes, and with a perfectly dimpled smile, tilted his hat toward me.

He tilted his fucking hat.

He remounted the horse—Levi’s clinging to his muscular thighs—and whistled for the dog to follow him through the pasture.