The One that Came Back

Based on a True Story: Four years ago, Johnny Bartlett went missing. After being allegedly taken overseas for sinister reasons, he’s finally returned to his family… but something is very wrong. Follow two FBI agents and a private investigator as they dredge through the depths of Johnny’s past and try to discover what really happened that night four years ago... 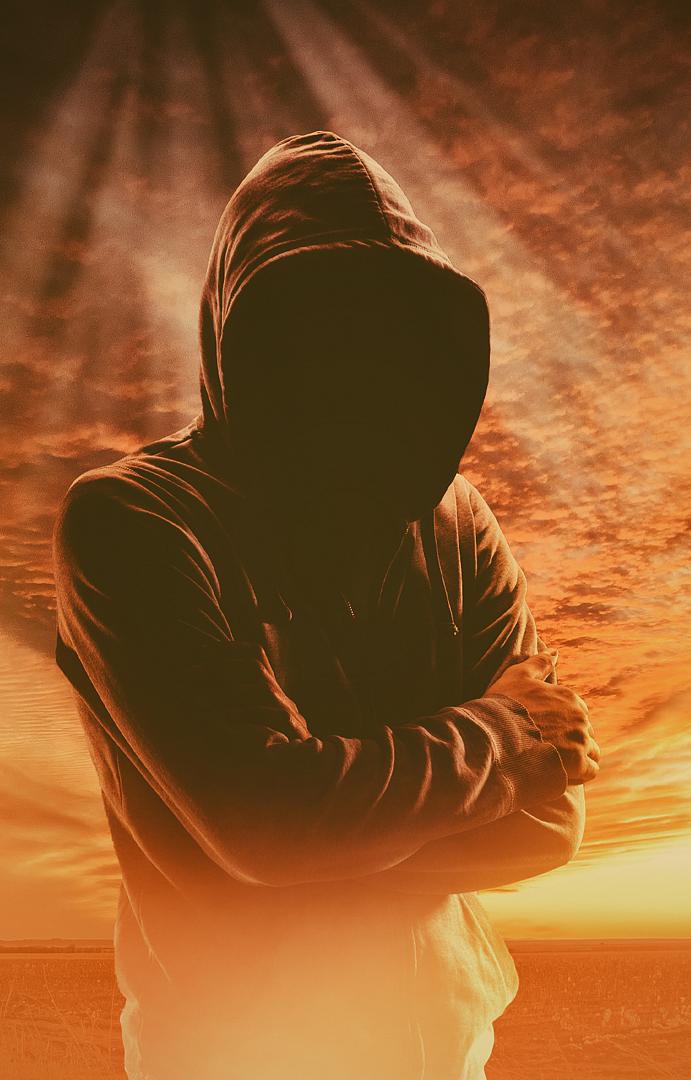 The One that Came Back

Based on a True Story: Four years ago, Johnny Bartlett went missing. After being allegedly taken overseas for sinister reasons, he’s finally returned to his family… but something is very wrong. Follow two FBI agents and a private investigator as they dredge through the depths of Johnny’s past and try to discover what really happened that night four years ago...

1: Chapter One: A Little Rain

“My wife and I are here as tourists—”

The rain beat down, getting in all the cracks on the sidewalk. It dashed cars and made those little, muted tapping sounds as it hit people’s coats as they walked by.

Neon lights of a sign and car headlights streaked in the rain as if they were melting.

The soothing sound of the rain falling muted the sounds of thunder.

A boy tried to make himself as small as possible in the bottom of a phone booth. The rain beat down, tapping on the glass, trying to get in.

He wore a hooded coat with a cap and a pair of running bottoms with white stripes up the sides. He sat curled up with his head on his knees, breathing steadily, the receiver hanging by his head.

The phone booth stood alone in the center of a cobbled town square lined with caged trees. European-style lampposts, dotted throughout the square, cast sickly yellow pools of light.

There was a square-roofed totem plastered with aging posters advertising bands in Spanish.

There were stark bushes behind the totem, all their leaves long gone and left with only boney finger twigs stretching out in all directions.

The boy in the booth peeled back the sleeve of his jacket and looked at a digital watch. The time was 9:58 p.m.

The bottom of the phone booth was made of some cheap plastic, like a black shower mat, curling at the corners. It was wet with people’s footprints and the rain getting in through the cracks.

Dirty cigarette butts were mashed into it, and there were little pink pieces of paper and fliers with girls on them soaking up muddy water, and a boy.

A police car pulled up in front of the totem with its lights off. The headlights filled up the phone booth. They stopped the car and put the lights on, red and blue flashing. They got out of the car.

Two cops with their hoods down. On the passenger side, the bald cop approached the phone booth speaking Spanish, reaching out his hand as if he was trying to feed a small animal.

The boy lifted his head to look at the light through the crack in the phone booth door. He shivered as the cold damp started to get to him.

The man approached, slow and low, and the boy made himself even smaller. He shrank into his big raincoat and tried to get away from himself. But he was in a corner.

The policeman opened the door of the phone booth and asked him if he was all right. The cop was of average build, in his forties, with a graying beard.

The concern lines on his forehead painted a vivid picture of a man with his own problems; he didn’t need to be out here.

The rain poured down on him as he spoke, trying to be heard over the constant beating of water around his head.

The boy lifted his head an inch, hiding his eyes behind the lip of a cap pulled down low on his head. He cowered with his hands in front of his face.

The cop lost his patience for a moment and reached out for the boy. The boy pulled back. He was shaking.

“Tranquilo, tranquilo,” the cop said slowly as he put his hands up and backed off just a little. He signaled for the boy to come: “~Vamos~.”

The boy was ashen, shaking. He looked lost and frightened.

The cop took his arm and gingerly helped him to his feet.

He led the boy, who was hunched like a refugee, toward the brightly lit police car.

The boy’s legs seemed weak. His knees buckled, and the second cop swam through the rain to prop him up on his other side.

They carried him, arm in arm, to the waiting police car, the sound of the windshield wipers screeching.

They put him in the back seat and shut the door. He ducked his head and listened to the rain.

“What is your name?” a woman said in a robotic tone. “Tell us your name,” she asked again.

They watched the boy’s face, even as he tried to hide, on the monitors. His cap was pulled way down, and he had a scarf covering the other half of his face.

“Where do you live?” she kept asking.

The pixelated camera zoomed out as he said nothing. He hung his head like a frightened animal. “Do you live with your parents? Did they hurt you?”

It looked more like an office than an interview room. It was wood paneled with a wall of opaque glass.

The boy looked out the door and saw a handful of people at desks, lit by old-fashioned lamps, sifting through papers. Phones ringing, people talking, clattering of chairs and hushed breath.

His hands were deep down in the pockets of his coat. He got comfortable in the chair, sinking farther and farther down into it.

It smelled like cigarettes and heady perfume in the office. Sweet and bitter smells.

He sat at a wooden table. There were loose pieces of paper in Spanish tacked onto the wall: notices, pictures of people.

The woman across the desk was pretty, in her early to midthirties, but with a strain of concern on her face that looked like it had always been there.

Her sandy hair was tied back in a tight plait littered with split ends. She was in a blue uniform adorned with shiny gold buttons. She continued to talk, and he watched her lips move.

He looked behind her. On the wall were more posters. A laminated one behind her head had large pictures of people and said, “MUY PELIGROSOS,” in bold letters.

There was a bookshelf packed with hastily tidied files, binders, and large books that looked like phone books piled on top of each other in no particular order.

In the outer office, people were smoking and tapping away at old computers. The bald policeman who had picked him up was on the phone, looking at him through the crack in the door.

He nodded, putting out his cigarette and hanging up the phone.

The boy sat in a waiting room on a long leather couch that looked like the back seat of an old car. A hand-painted mural behind his head looked like storm clouds. He sat with his head down.

A woman at a desk was speaking Spanish into a telephone. She put the phone down with a surly click and got up, walked around her desk, and sat on the front of it with her hands in her lap.

“Please tell us who you are. Why don’t you have any ID? Are you from Spain?”

He was in the office of a children’s home. It was a large room filled with desks and computers.

On the wall behind the director’s head was a large map of the world and pictures of her family, a holiday, a mossy cave, a beach somewhere, school pictures, children sitting in rows, children’s drawings.

She dipped her head as if to implore him. “If you can’t prove to us who you are, we’ll be left with no choice but to fingerprint and photograph you right now and pass them on to the police. Do you understand?”

He looked up, his eyes searching her face. She looked like she was trying to comfort him, but she was also disappointed that he didn’t exist.

“Peggy, it’s your mother, are you sitting down? You’re not going to believe this,” an old woman’s whiskey-soaked voice rattled down the phone line.

“Mom, what is it?” The girl on the other end sounded startled; it was late.

“They found your brother, Johnny. They found Johnny in Linares!”

“Oh my God! What part of Texas is Linares in?”

“Spain? When can we see him? When can we get him back?” Peggy was rushing now, almost slurring her words, her heart jumping up and down as if it were on a pogo stick.

“They gave me the number for the shelter he’s in. Peggy, can you call? You have to be the one that goes and gets him.

“You have to go get your brother, do you understand?” Her mother was begging now; there was no one else she could rely on.

Peggy’s mother quickly rattled off the number, and Peggy jotted it down on a piece of notepaper by the phone.

She hung up the phone without saying goodbye, or even thinking, and let it sit in the dark spot of her mind for a moment. She took a few hurried breaths, feeling a little light-headed.

The room felt like it was getting smaller. Finally, she took the phone out of the cradle. It was an old-fashioned gray phone with big buttons. She put it to her ear and dialed the number.

The phone rang for a moment, and then a man with a European accent answered.

“Hello, this is Peggy Carson. I was told to phone this number.” She paused with a sudden shortness of breath. “Johnny, Jonathan Bartlett.” She sucked her bottom lip.

“Do you have him?” An eternity passed as she waited for a response. “Hello?”

“Yes, we have him, Jonathan Bartlett. He’s sitting right here next to me. I am Joan Dorian. I work at the children’s center, and we are sure it is him. You must understand, he is very scared.

“He has been through a traumatic experience, do you understand?”

“Please, can I talk to him, just for a moment?” The concern in Peggy’s voice rose. She’d begun twiddling the phone cord between her two fingers.

“I’m sorry, Mrs. Carson, he doesn’t want to talk to anyone as of this moment. He’s been through a very hard time.

“We believe he may have been abused by whoever abducted him, and he’s not in the right frame of mind to talk to anyone.”

“Please, Mrs. Carson, understand, this is not the same boy you knew. He’s been through a hell of a lot. He’s going to need a lot of time to come to terms with what happened to him.

“He’s going to need a lot of love and understanding and patience right now, okay?”

“All right, please give him my love.” She stopped to take a breath. “Does he remember us? Does he remember his family?” Her voice croaked and shook as if she was afraid to ask.

“He doesn’t remember much. He remembers you, but not a lot else, I believe.”

“Please, just let me hear his voice.” She was desperate.

Another eternity passed before a strained child’s voice came on the line.

Peggy welled up and burst into tears.

“Hello, Johnny? Johnny, is that you? We missed you, baby. We’re going to get you back soon. Don’t worry, we’re coming. I love you.”