Only in the Dark

Aris’s parents have always spent more time with their experiments than they have with her, until the day that she becomes the experiment. Now she finds herself fighting monstrous urges whenever darkness falls. Can Aris learn what is happening to her before she gives in to her new, bloodthirsty urges...and does she even want to? 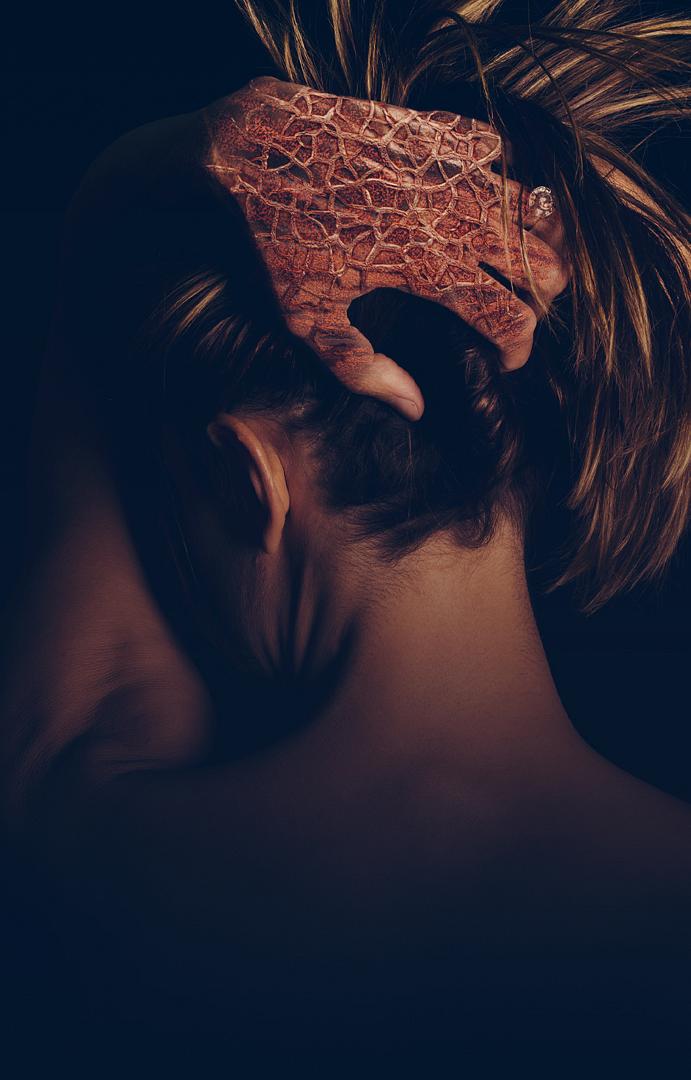 Only in the Dark

Aris’s parents have always spent more time with their experiments than they have with her, until the day that she becomes the experiment. Now she finds herself fighting monstrous urges whenever darkness falls. Can Aris learn what is happening to her before she gives in to her new, bloodthirsty urges...and does she even want to?

The white basement door. It was something that held a lot of mystery to Aris Walker and her best friend Billy North. Aris had lived in that house for most of her life, and had never once been in the basement.

On many occasions, the two friends would stare at the door and wonder what lay behind it. Aris often got tired of that game, but Billy always seemed interested in coming up with new theories about the basement.

“You’ve really never been in there?” Billy was sitting next to Aris.

“I’ve told you, it’s off-limits.” Aris sighed and put her head back on the soft, tan couch, and looked up at the ceiling. Another boring day at her house.

Billy still could not keep his eyes off the door. “What do you think they’re doing in there?”

“They’re scientists Billy; they do, scientificy things.” Aris put her hands up in the air.

“But they could be genetically growing monsters down there or something.”

“It’s their business what they do in there, and it’s not that big of a deal anyway.” Aris sighed.

Billy smiled and tried to contain his laughter. “You still can’t find the key can you?”

A smile crossed Aris’ face. “I have looked everywhere for that stupid thing.”

The two friends burst out in laughter. Aris’ parents spent almost all their time in the homemade lab, and when they were not in the basement they were at a government facility in the city: LifeTech Labs.

Aris and Billy wasted many afternoons sitting in front of that door wondering what was going on behind it. Aris’ parents always said that all of their work was top secret and they could not discuss it under any circumstances.

That spy movie-like secrecy, of course, piqued their daughter’s curiosity even more.

After a few more minutes of staring at the door, Billy looked over at the grandfather clock in the corner. “I think my dad’s making chicken tonight, want to come over for dinner?”

Aris smiled, she loved Billy’s dad’s cooking. Aris ate at the Norths’ many nights, except for the few nights a week her parents would make time to spend with her.

Most nights by herself were either spent experimenting in the kitchen, which did not always go over well, or throwing a TV dinner into the microwave.

Aris looked over at Billy. “Have I ever declined an offer for your dad’s cooking?”

A smile spread across Billy’s face. “Well, there was that time he tried making tuna surprise.”

Both teenagers cringed at the thought of that night and got up from the couch to make their way over to Billy’s house.

Billy lived two streets over from Aris in the town of Glenbrook, a small community just outside the city limits.

Though a lot of people did not think calling it a “city” was justified, as there were no skyscrapers or crowds of people roaming the streets. It was quaint, just big enough to be issued a city title.

The two lived in an almost suburban neighborhood full of the upper-middle class. All the different houses of Roseland Village lined up in nice rows and were settled in their cul-de-sacs.

Tall trees surrounded the entire neighborhood, taking the strain off of the long summers. As Aris and Billy walked to his house they watched all the kids playing in the sprinklers of well-mowed yards.

They only had a couple of weeks of school left, so all the kids had begun to get summer fever.

Billy had a red brick house that was, like most in Roseland Village, two stories tall. The inside was decorated in ultra-modern décor.

Billy’s father owned an art gallery and did a lot of modern art himself, so his paintings and sculptures lined the walls of the house.

Billy’s mother worked as a bank manager, and even though she made most of the money in the house she loved her husband’s art.

Part of the reason why Billy and Aris were such good friends was because all the other kids in the neighborhood thought their parents were too weird.

Most of the people in Roseland Village worked at boring offices or as accountants, so Billy’s dad and Aris’ parents were not quite conventional.

When they got to Billy’s house his parents had already started cooking dinner. Billy gave them a wave as he and Aris walked into the kitchen. “Hey, Mom. Hey, Dad. Aris is staying for dinner.”

Mrs. North smiled. “You know you are always welcome here, Aris. Although I do feel like we are hogging you sometimes. Billy, why don’t you ever eat over at the Walkers’?”

Billy laughed and leaned against the counter across from his mom. “Yeah, and have them observe my every bite? I feel like an experiment when I eat over there.”

Aris smirked as she went into the cabinets and grabbed silverware to set the table.

“I’m sure they aren’t that bad.” Mr. North laughed.

It was Aris’ turn to laugh now. “The last time he came over they stared at him eating and then documented it all down.

His table etiquette, how he holds a fork, how long it takes to chew. It was so embarrassing, but hey, that’s my parents.”

Billy nodded in conformation. “Yeah, so I think we’ll stick with eating here.”

As Billy’s parents finished cooking dinner, Aris thought about how weird it was that she got along better with his parents than her own. They were always around and spent time with Billy when he wanted it.

Aris of course was used to her parents not being around and had grown accustomed to being on her own, but at times she wished her parents were normal.

They spent as much time with her as they could, so it was not as if Aris was raising herself, but she did not feel as connected to them as she did with Billy’s parents.

During dinner, they all joked, laughed, and talked about their days. Aris and Billy sat in the living room, while Billy’s parents cleaned up the kitchen.

After a little while, Aris yawned and looked up at the silver clock Billy’s dad made on the wall.

She put a hand through her straight blonde hair and stretched. “Well, I should probably go; those math problems aren’t going to solve themselves.” She gave a distasteful look and stood up from the blue couch.

Aris walked towards the door and waved to Billy’s parents. “Bye Mr. and Mrs. North, thanks for dinner!” She looked over at Billy. “See you tomorrow Billy!”

Everyone said goodbye and Aris walked back to her house. The streets were dark, only lit by the street lamps that cast long shadows across the ground. Aris liked the nighttime better than the day.

It seemed more relaxing; the quiet and calm of it all. She felt safe in the dark, like she was shielded from things she did not want to see in the day.

As Aris walked, she hummed a tune that seemed to always be in her head. She was not sure where the song came from, but she had hummed it since she was a little girl.

Once Aris got to her house she locked the door behind her and went straight up the carpeted stairs and into her bedroom.

She did not bother checking to see if her parents were around, she knew they were in the basement doing, well, whatever they did down there. Aris’ room was like that of most teenagers.

She had white walls covered in posters and wooden floors with a lime green shag rug in front of her bed. She had a cabinet across from her bed with a television inside, as well as some video games.

Her room was clean for the most part, except for a few clothes that littered the floor.

Aris walked over to her desk by the window and sat down in her plastic orange chair, which was her favorite color. She reached into her black book bag and got out her math book.

She looked at the answers in the back before she started each problem, and wrote down quick solutions so she could get her points. Aris was mostly a C+ student.

For the most part, she found school boring and did not really care about what they were learning. She was a pretty good test taker but did not try on her homework if she decided to do it at all.

The only class she did like at school was film studies, where they watched movies and critiqued them which was what she and Billy did with a lot of their free time anyway.

After putting her math away, Aris climbed into her bed and soon fell into a heavy sleep. Aris had always been a heavy sleeper.

Although Aris was unaware, her parents benefited from her heavy sleeping habits very much.

She had no idea they would conduct sleeping experiments on her throughout the night.

They would monitor her breathing, see what they could use to stop the snoring, and document how many times she rotated in bed.

On one particular night, however, Aris’ parents decided to conduct a brand new experiment, one that could destroy her life forever.