Don’t drink the Lake Starlight water! Bailey babies are busy growing in their mommies tummies and the Baileys are having a triple baby shower to celebrate. If you want in on the pool on who pops first and when, contact me. 😉 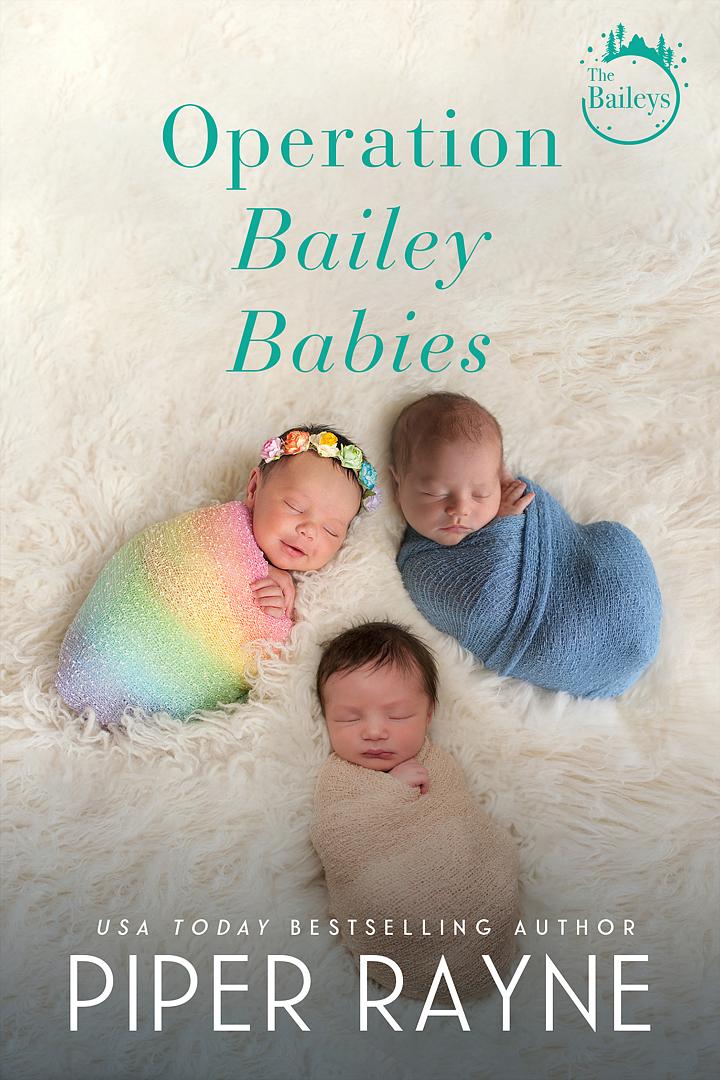 Don’t drink the Lake Starlight water! Bailey babies are busy growing in their mommies tummies and the Baileys are having a triple baby shower to celebrate. If you want in on the pool on who pops first and when, contact me. 😉

A Novella in the Baileys Series

“Motherfu—” I yank out my hand that’s being wedged between the back seat and the new car seat.

I’m cramped in the back of Holly’s SUV with a car seat jamming into my gut, trying to attach it to two metal prongs hiding in the crease of the seat.

Never mind the SATs, they should get high school students to try installing a car seat. If they can figure it out, they’re a certified fucking genius in my book.

“You can’t use that kind of language when the baby comes,” Holly says.

I glance over my shoulder. She’s rubbing her swollen stomach behind me, watching with eagle eyes to make sure I get this thing installed just right.

“Have you thought about those names I gave you yet?”

Thankfully she can’t see my face. I love my wife, but I hate all the names she’s come up with. I don’t want to name my daughter after a fruit, a tree, a flower, a season, or anything else.

Whatever happened to Katie, Kim, or Jennifer? Those are good solid names. But she wants something original. You know, the kind that doesn’t even make the top two hundred baby name list kind of name.

“I’m not sure about Reighleigh,” I say. “I’d like my daughter to spell her name before she’s ten.”

The silence behind me is a scary thing. I should’ve kept my mouth shut.

“Your parents were so original. Why can’t we have that?”

“Maybe we should name ours Petri then.”

Holly’s lost a little of her sense of humor at this stage of her pregnancy.

In the beginning, I think she was so elated about finally becoming pregnant, she took the morning sickness and the fact that she traveled to and from work with her own barf bags like a champ.

Then there are the bouts of melancholy late at night while I’m watching television in bed and she’s reading some book she thinks is going to prepare her to become a mother.

I’ll catch her rubbing and staring at her swollen belly.

I’ll ask her what’s wrong and she’ll confess her worry that she’ll only experience pregnancy once, so she needs to be sure to really savor this time in her life.

Which is part of why I think she’s a little grumpier these days. She can’t wait to meet our daughter, but it means the end of her pregnancy in just a couple weeks.

“Let’s go through the book again,” I suggest, crawling out from the back seat after having successfully installed the car seat.

“I wanted a name before the shower so people could have things embroidered or made with her name on it.

“Juno made sure all of our colors were listed on the invitation if anyone wanted to get personal with their gifts.”

“Good thing Savannah and Liam ended up finding out what the sex of the baby is.” I rock the seat back and forth to make sure it’s secure.

How two metal hooks can secure the most precious cargo I’ll ever haul, I have no idea.

“How do you think Savannah got him to agree to that?” Holly laughs, leaning in close to inspect whether I did a good job.

I’ll admit I was surprised too. Liam had dug his heels in about wanting it to be a surprise and she’d agreed at first.

With Savannah’s inherent need to control, I thought for sure she’d have everything for the first year of the baby’s life ready to go by the time she was six months pregnant.

But I think it was all part of her plan—biding her time until she could get him to agree.

“Savannah gets Liam to do a lot of things I’m surprised about.”

I slide out of the way because Holly wants me to but doesn’t want to seem like she doesn’t trust my ability to keep our child safe.

It’s amazing how you get to know someone’s non-verbal communications the longer you’re married.

She does the same thing I did with the car seat and inspects all around as though I might have missed something. “Looks good.”

She turns at my laugh. “What?”

“Nothing. Just that she’s my daughter too. Do you think I wouldn’t make sure she’s safe?”

Holly shuts the car door, and I wrap her in my arms. We’ve mastered the side hug since she hit the third trimester.

“I was just checking,” she says.

She swats at my stomach but doesn’t look up because she knows exactly what she was doing.

“What do you want for dinner tonight?” I ask.

She shrugs. “Is ice cream an answer?”

Holly told me she’d read that the baby will love what the mother craved during pregnancy. So our baby will probably open an ice cream parlor because Holly only wants ice cream.

But only vanilla with candy mixed in.

“Isn’t the baby craving steak yet?”

With Holly’s aversion to eating a big juicy steak after I grilled some rarer than normal and she saw blood, I’ve resorted to eating only the Salisbury steak they serve when I visit Grandma Dori at the Northern Lights Retirement Home.

The sacrifices we make for the ones we love…

I nod because missing steak isn’t equivalent to carrying a ten-pound bowling ball around in your stomach all day. Holly’s doing the heavy lifting here.

It was her body that grew bruised and tender from all the shots, her body on the doctor’s bed constantly having ultrasounds, her arms poked with a needle every other day to draw blood.

She’s been through hell for us to have a baby, so if I don’t eat steak for the rest of my life, it’s okay.

I put my arm around her shoulders, walking us through the garage. “It’s okay. You name it and it’s yours.”

She leans her head against my shoulder, way too proud to admit how tired she is, and gives me her sweet puppy dog eyes.

We walk back inside the house—it was Timothy and Elizabeth Bailey’s house first—my parents. We’ve renovated from top to bottom, with the exception of a few bedrooms.

Myles is at the door and Daisy lays in her bed.

When he tries to jump on Holly, I say, “Get down, Myles. How will we keep him away from the baby?”

She pets him and nuzzles her nose against his. “He’ll be gentle.”

“Gentle as a hyper elephant.”

“No. You’ll be good to the baby, right, Myles?” She scratches behind his ear, his favorite spot. She pets Daisy, whose body goes limp and falls deeper into her bed.

Holly walks to the couch and picks up the baby name book again.

I hate that damn thing.

“I’m going to search again, because pretty soon she’s going to be born and we’re going to be those parents holding Baby Bailey.”

I shrug. “I don’t think that’s so bad. Her name is important.” The last thing Holly needs is to be stressed out about the name of our baby.

“I don’t want to introduce her to everyone like that.” She rubs her belly with her free hand, staring down as if the baby is going to whisper what she wants to be named.

“The least I can do for my first motherly duty is name my child.”

The edge in her tone says now is not the time to argue this point. It’s taken many a breakdown over the past months for me to figure that one out. “How about a hot bath before the ice cream dinner?

She smiles and sighs. “That sounds amazing.”

I give her a kiss on the temple and a pat on the stomach before walking up the stairs to draw her bath.

While she soaks, I figure I’ll lay in bed and catch some of the spring training games, but the room to my right pulls me in.

The room screams girl. Four pale pink walls, a white crib with light yellow bedding. The spot above her crib is blank until we name her.

The new changing table and dresser we bought two weeks ago are white as well. I never really cared what we had, especially after we tried for so long. And I too fear that this might be our only baby.

I know Holly wants our daughter to have siblings because she didn’t have any. Growing up with eight siblings might’ve been a pain in my ass sometimes, but I wouldn’t change a thing.

The doctors say this pregnancy could restart her system. They’ve seen cases where people have gotten pregnant after rounds of IVF. But nothing is guaranteed.

The room looks like a unicorn threw up in it. As if she’s coming out of the womb wearing a tutu and hair bows. I’m not sure how great of a girl dad I’ll be, but one thing’s for certain.

She’ll know how to throw a killer fastball.