The rumor around town is a certain matriarch of the Bailey family is having a BIG BIRTHDAY! It’s even brought a few of the Bailey kids home to celebrate with their beloved great-grandmother, Dori. In fact, now that there are twenty-six Bailey great-grandchildren, the event is going to be overflowing with laughter and love.

Also… I heard that Piper and Rayne have been speaking to some of the kids (Calista, Maverick, Easton, Brinley and Palmer). I can’t wait to report my findings the day after the party! 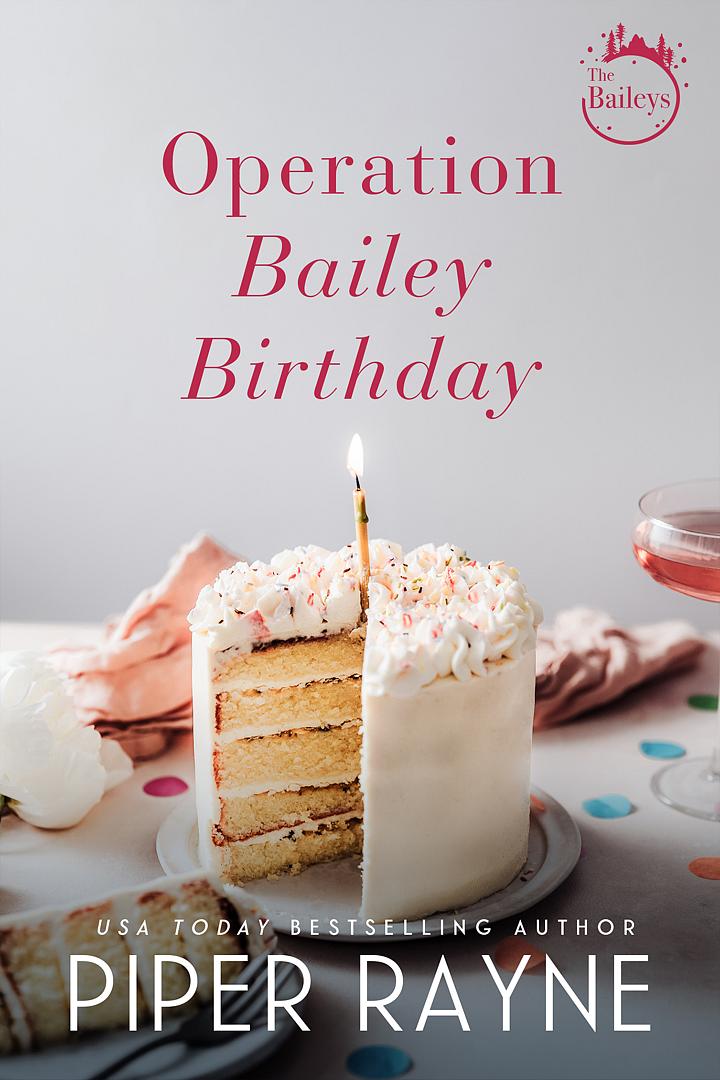 The rumor around town is a certain matriarch of the Bailey family is having a BIG BIRTHDAY! It’s even brought a few of the Bailey kids home to celebrate with their beloved great-grandmother, Dori. In fact, now that there are twenty-six Bailey great-grandchildren, the event is going to be overflowing with laughter and love.

Also… I heard that Piper and Rayne have been speaking to some of the kids (Calista, Maverick, Easton, Brinley and Palmer). I can’t wait to report my findings the day after the party!

A Novella in the Baileys Series

Easton Bailey (fifteen and a half years old)

I’m not sure what’s worse.

The fact that my dad saved his old-ass Jeep for me to drive when I turn sixteen or the fact that he makes me drive our entire family to school every morning as part of my “learning to drive” experience.

“You have to stop before you turn right,” he dictates from the passenger seat.

“You don’t want Sheriff Miller Jr. to pull you over,” Mom chimes in from the back. At least she doesn’t watch my every move, waiting to correct me like Dad. “Harper, you gotta eat something.”

“Kind of crazy when you think of Sheriff Miller…” Dad glances at the back seat, and he and my mom exchange creepy smiles that say they’re remembering a time before my sister and I were around.

“If it wasn’t for the retired Sheriff Miller’s daughter we might not all be here,” my mom says and runs her hand down my dad’s arm.

Harper huffs. At least she’ll get out of the Jeep first since she’s still in middle school. “Please stop.”

“It’s a great story. Are you sure you don’t want to hear it again?” my mom jokes.

I watch in the rearview mirror as she picks up the granola bar Harper put down on her backpack and hands it back to my sister with the look of “eat the damn thing.”

Having a thirteen-year-old sister has taught me that girls her age are temperamental—you never know what mood she’ll be in every morning.

“If Sheriff Miller Jr. wasn’t born and his mom didn’t take maternity leave from the school, your mom—”

“Wouldn’t have come to Alaska and been your boss,” I say. “We know.”

“Principal.” My dad winks at my mom behind us.

I pull into the middle school to drop off Harper. She’s already unbuckling her seat belt and grabbing her bag.

“Yeah, yeah, and you two fell in love.” I pull the Jeep beside the curb.

“And you should both be thankful, otherwise, you wouldn’t be here.” My mom sounds annoyed that we’re not going gaga over their love story, but seriously, they’ve told it a million times.

“Here you go, brat,” I say, putting the Jeep into park.

My mom says my name as if it’s a scolding, but we all know she’d like to call Harper that on the daily.

“Yeah, I’m so sorry I can’t drive the entire way with you, East. I mean, being Mom and Dad’s chauffeur and having Mom as your principal and Dad as your science teacher. I’m super jelly.”

She gets out and slams the door shut.

I ignore her and roll my eyes, putting the Jeep into drive. She’ll feel my pain next year when she starts high school.

I look through the rearview mirror as my dad turns to face Mom. She’s holding up the granola bar. Dad snatches it from her hand and opens his door.

I satisfyingly put the Jeep into park again and roll down the passenger window, so I don’t miss a minute of what’s gonna happen. This will be good.

“Harp!” my dad yells. He jogs down the pathway a few feet, holding up the granola bar.

A honk blares from behind us and I look in the rearview mirror to see Uncle Denver in his truck.

My cousins Ryder and Rohan file out, heads tucked into their coats as if they didn’t just emerge from the truck.

I shift my attention back to my dad, who’s waving at my sister to leave her friend group and come over to where he’s standing, but a pounding on my window startles me and I look away.

“Son, you’re holding up the line.” Uncle Denver tries to sound like a police officer.

Sometimes I wish Uncle Denver were my dad. He’s so fun and he’s always doing crazy shit. But right now, he looks tired with bags under his eyes.

My mom rolls down her window. “How are the twins?”

Aunt Cleo just had another set of twins—girls this time—and Mom and every one of my aunts can’t get enough of them. Maybe because they’re the youngest of the Bailey brood by five years.

“I bet they fall asleep in your arms and their little hands wrap around your fingers. The quiet nighttime feedings when it’s just you and them…” My mom’s eyes roll back in her head as if she’d do anything to relive that experience.

“Amazing how warped your memory can become over time. Cleo was like you until the reality of being woken by screams and never leaving the house without a stain on her clothes set in.

“I will say though that the betting is fun.”

“Yeah. I grabbed Abby, and Cleo put her money on Allie.”

“On what?” My mom sounds as confused as I am.

“Who will walk first. Abby is so close, and the minute she walks, Cleo owes me a—” His gaze trails back to me in the driver’s seat. “Well, let’s just say I win.”

Mom drops the subject, but I’m not some naïve little boy. Is that what marriage is like? Having to make bets to get blow jobs?

“Denver,” my dad says, climbing into the car. “Did you order the balloon bouquets?”

Uncle Denver laughs. “Relax, I got it covered.”

My great-grandma’s ninetieth birthday party is this weekend and we’ve had about a million family get-togethers to talk logistics.

Great-Grandma Dori is pretty much planning the entire thing while acting as though she has no idea we’re throwing the party.

Denver laughs. “Shit, East, you got the principal wrapped around your finger. Take advantage.” He laughs.

“See you all later.” He waves and heads back to his truck, where he climbs in and speeds off around me.

“How is it that he just never grew up?” my dad says—more to himself than us, I think.

I love my dad, but he’s so serious most of the time. My mom harps on my grades and about college, and my dad keeps asking me how serious I am about baseball.

It’s easy to tell he doesn’t want to push me too hard, but I’m sure he’d be ecstatic if I chose to pursue baseball. His shot was thrown when my grandparents died, and he returned home.

Although he’s adamant he regrets nothing because he has my mom and my sister and me.

I drive five more minutes and park in the back of the lot of the high school because I’m pulling up with my parents—the school’s principal and science teacher, who have been found way too many times making out in closets or my dad’s classroom.

I get razzed about them all the damn time.

I toss the keys to my dad and bolt across the parking lot.

I lift my hand in a wave without turning around. As I’m approaching the curb, Lance pulls up in his dad’s truck. Uncle Wyatt files out of the passenger side to round the truck.

“Easton!” Uncle Wyatt high fives me and luckily stops my parents from breaking the distance between us.

I nod as we fall into step with each other.

We walk into the school and I nod at a few friends. Lance’s dad, my uncle Wyatt, comes from a wealthy family in Manhattan, and Lance always gets extravagant gifts for holidays and his birthday.

“Once I get my license, I’ll pick you up in the morning so you don’t have to drive the Jeep,” he says.

He’d be easy to hate if he didn’t say shit like that. I remember the time he got the new game console we’d been begging for, and he let me play first. I couldn’t ask for a better cousin.

“Check out Brinley,” I say nodding to our cousin putting on lip gloss at her locker mirror.

Her best friend, Kenzie, is next to her, rambling on about something.

I punch his shoulder. “I knew you had a thing for her.”

He rubs his arm as if I actually inflicted pain. Lance isn’t athletic. He’s more into being the school president or editor of the newspaper.

“Not many options in a school full of our damn cousins,” I say what I know he was thinking.

We go to high school with six of our cousins. Three of us are referred to as the Bailey Triplets, since we were all born within a day of each other.

Although Lance’s last name is actually Whitmore and Brinley’s is Kelly, we’re all Baileys—especially in Great-Grandma Dori’s eyes.

“Hey, Phoebe.” I nod at our oldest cousin who attends Lake Starlight High.

Her boyfriend, Coulter, is at her side with his arm slung over her shoulder. Uncle Rome hates Coulter, but I don’t know the details of why.

The bell rings, and Lance and I say goodbye and head in different directions.

I sit in my homeroom class as Kenzie sits down next to me.

I can’t tell Lance that Kenzie’s been flirting with me since the start of the school year. Everyone knows he likes her—that’s been clear since we were kids, and she and Brinley became best friends.

So I try my best not to notice her. Not notice her long dark hair and her glossy pink lips. Not notice the way her eyes fall over my body as if she’d love to jump my bones.

Not notice my body’s physical reaction to her.

Hell, I’m fifteen, I have no control of my body, right?

“Brinley invited me to your great-grandma’s party. I hope that’s okay?”

I glance at her to be polite and she’s smiling. “My great-grandma wants the entire town there, so I’m sure she’ll be thrilled.”

“And what about you? Will you be thrilled if I come?”

I repeat the mantra to ward off the temptation of acknowledging Kenzie’s attention. It works for the moment.