No one would have guessed a marriage could sprout from a one-night stand, but Holly Radcliffe and Austin Bailey's love appears to be written in the stars. From the backseat of Austin's Jeep to the altar they come. The town of Lake Starlight along with the Bailey's are prepping for the event of the year, but as usual things never go smoothly with these nine siblings and their quirky Grandma Dori!

Don’t fall for your one-night stand. 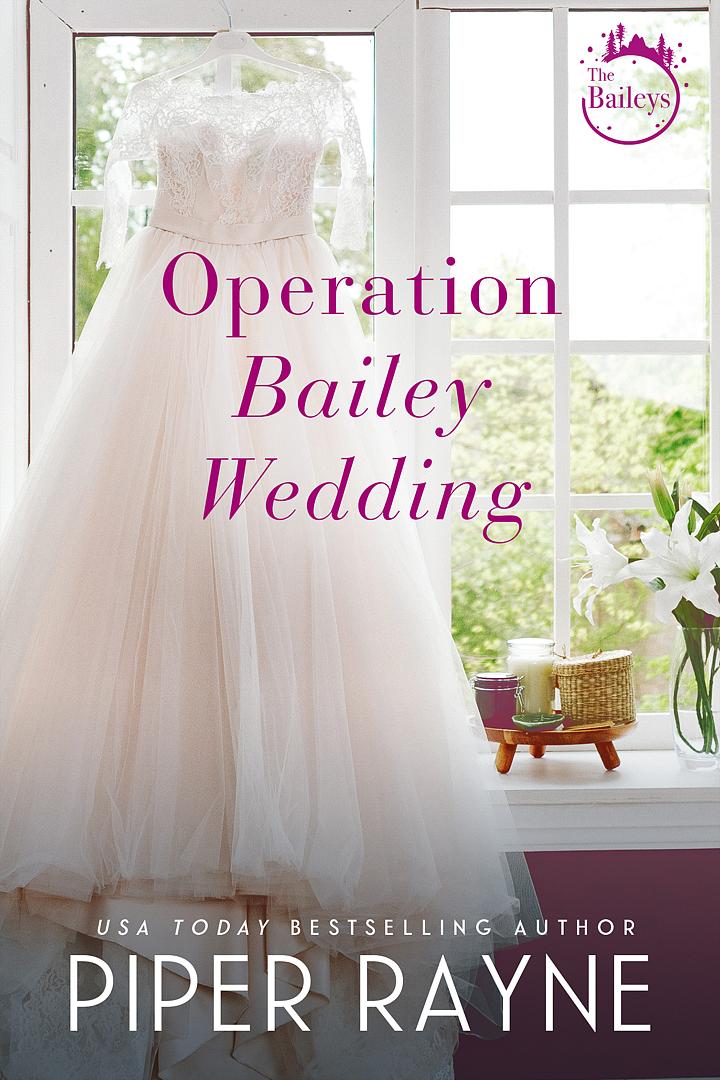 No one would have guessed a marriage could sprout from a one-night stand, but Holly Radcliffe and Austin Bailey's love appears to be written in the stars. From the backseat of Austin's Jeep to the altar they come. The town of Lake Starlight along with the Bailey's are prepping for the event of the year, but as usual things never go smoothly with these nine siblings and their quirky Grandma Dori!

Don’t fall for your one-night stand.

Book 3.5 of the Baileys Series

Five days until the wedding…

“Get back, doggies.” I nudge Myles and Daisy with my legs as I slide into the house with my wedding dress in my arms.

“Hol?” Austin yells from the kitchen.

“You stay right there!” I yell back.

“Why?” His voice is growing closer, so I kick off my flip-flops and head for the stairs.

“You don’t actually believe in that superstition, do you? I want to see you alone on our wedding day before, not in front of everyone. I want a moment…”

His voice drowns out when I slam the guest bedroom door. I hang up my dress, ignoring the four paws scratching outside the door.

They act like the room is overfilled with chew toys, treats, and a smorgasbord of steak.

Myles whimpers under the door but Daisy’s four paws prance on the hardwood floors we just installed throughout the whole house.

Our first major change in our quest to transform it from Austin’s family’s home into our own. I still hold my breath every time one of his siblings comes over for a visit.

They tell me it’s okay, but I understand what it’s like to be blindsided. I thought I had all my daddy issues worked out before running into him after my final dress fitting this evening.

He asked me questions about the wedding and wondered if his invitation got lost in the mail. Needless to say, there’s no love lost between the two of us.

I unzip the garment bag, letting the dress hang out to make sure the puffy layers don’t wrinkle before the big day.

As I stand back and admire its beauty, I want to pinch myself that the day I’ll become Mrs. Holly Bailey is right around the corner.

I’ll keep my maiden name for work purposes only because it’s tricky when the principal and the science teacher have the same last name. A name that is very well known in Lake Starlight.

I’m not fooling anyone, half the town will be attending our wedding in the town square. If they weren’t invited, they’ll still have a chance to stand witness.

“Babe!” Austin yells from downstairs, probably ready to talk about more of his wants when it comes to the wedding. I’ve never heard of a man who pays attention to the details.

Isn’t he supposed to just be happy and show up?

“I’m coming.” I slide out of the room with one more glance at my dress. “Let’s go, Myles.” I pat his head and head down the stairs. I’m not sure where Daisy got off to.

Myles walks down with me, stair for stair. Austin’s waiting at the bottom of the stairs.

He has a glass of wine in hand because I called him on the way home, so he knows I ran into my father tonight.

It’s not like we haven’t talked about the possibility of my father attending our nuptials, we have. At length.

Austin thinks I’ll regret not having him as a guest whereas I say he’s never been a real father to me, so why would I care?

But I don’t get angry when he brings it up because he’s coming from the place of a son that doesn’t have the option of having either of his parents there.

“Thanks,” I mumble, taking the glass from his hand and sipping its sweet goodness. “Perfect.”

“The sun is setting behind the trees and it’s beautiful.

“Come.” He puts his arm around my shoulders and leads me into the kitchen and through the sliding glass doors onto the outside deck overlooking the property.

Austin’s a consistent strong body for me to lean on when it comes to my issues with my dad. But what my dad has done to his family complicates things.

We sit down in a set of deck chairs and I prop my feet up on the small table in front of us. Austin was right. The sky is lit up with pink, yellow, and orange colors as far as the eye can see.

It’s breathtaking. The glowing sun slides down the horizon giving us our first glimpse of the sky full of stars that will take over.

The best decision I ever made was taking that temporary principal position to find my father.

It led me to Austin, so I guess in some small way, my father brought me the best man who’s ever entered my life.

He raises his eyebrows staring at me until I fess up.

“He asked if his invite got lost. I mean the nerve of him.” I sip my wine.

“That’s not really a surprise.” My fiancé settles in next to me, putting his arm around me. “You gotta ask yourself, babe, do you really not want him there?”

“I have no idea. I mean my mom will be there… Savannah…”

The last thing I want is the police called to my wedding.

“Don’t worry about them. This is about you. Do you want him there?”

I traveled thousands of miles for the man, only to find out he has a brand new family he dotes on after leaving my life completely when I was young.

A part of me is not even sure he’d want to come, and the possible rejection makes me gun-shy.

“Come here.” Austin pats his lap and I crawl into his big body. “I love you,” he whispers in my ear. “All I care about is that you walk down that aisle to me. The rest is just noise.

“If you want him there, I’ll handle Savannah and your mom too if you want. If you don’t, then cool, no biggie.”

I grip my arms around his neck a little tighter. “How did I ever get so lucky?”

He chuckles into my neck, his thumb running along the bare skin between my shirt and my shorts. “I’m the lucky one. I can’t believe I almost gave you up.”

“I can’t believe I almost let you go.” I draw back from our embrace and press my hand on his cheek. “Just noise, right?”

He smiles, that light-up-my-heart one that says all we need in this world is us. “Noise. Now let me distract you.” His tongue slides up my neck until his teeth latch on to my earlobe.

“Let’s make some noise of our own.”

I giggle and feel his hardness under my ass. “That was cheesy.”

His hands run up my back, pulling me closer. “You telling me my lines are shit?” His mouth casts open kisses along my neck, and he arches me to expose my chest.

Just when the fabric of my shirt stops him, his hand slides along my waist to flick a button on my shirt open.

“I love your lines.”

“There’s the right answer.” Another button releases, then another.

“Out here though?” I look behind us, wondering when a Bailey sibling may surprise us.

“After you said my lines suck? I have to prove myself.”

He pats my ass to get up and I rise to my feet, missing him immediately. But before I can fully miss him, his fingers flick the button of my shorts and he lowers the zipper.

“My favorite color,” he says, sliding them down my legs and leaning forward to press a kiss right between my legs.

His hands move up and he undoes my shirt one button at a time, blindly moving it off my shoulders as his lips kiss all over my stomach. “Can’t wait until you have my baby in here.”

My heart grows wings with his words. Austin isn’t shy about wanting us to start a family right away. I’m sure part of it is due to losing his parents at such a young age.

When Calista, his niece, made a surprise appearance, it only spurred him further to want a little Bailey of his own. Once Dion was born, even more so.

“Let’s practice,” he stares up at me with hope in his eyes. This has been another merry-go-round conversation the past few months.

“Okay,” I agree, just wanting to be close to him. Besides, it’s less than a week until we’re married.

I went off the pill six months ago due to my age and the chance for blood clots, but we’ve been using condoms, much to Austin’s dislike.

But I refused to be standing at the altar with a burgeoning belly under my wedding gown.

“Really?” The smile that transforms his face is nothing short of magical.

I’d have ten of his babies if I got that look every time.

“Really,” I say and lean in for a quick kiss.

He leans back, pulls his track shorts down. “Well then?”

He laughs, pulling me so that I’m straddling him, and his hard length is pressed to my center. “I’m kidding. Come here.”

Our lips meet, his tongue sliding into my mouth. I could kiss this man every minute of every day for the rest of my life.

His fingers graze down my ribs and slide into my panties, pushing them to the side so he can enter me. The ache between my legs grows with each second that passes.

“Jeez, seriously, you two. Aren’t you supposed to be over this by now and be like an old married couple?”

“Phoenix!” Austin yells, positioning me away from her, but there’s no hiding anything.

“I’m home.” Her laugh trails off inside the house when she leaves the sliding glass door. “Myles, get off Daisy. You’re as bad as your owners.”

Austin hovers over me. “One week and they’re all going away, right?”

I smile up at him. “Please, we both know that’s not the truth.”

His head falls to my chest and he sucks one of my nipples into his mouth through my bra.

“Let’s go see why she’s here three days early.” I wiggle under him and he climbs off me, pulling up his pants and picking up my shirt and shorts.

“Sometimes I hate my big family,” he says.

We walk into the house to find five suitcases by the stairway. Turning to one another, we share a look of bewilderment.

Phoenix is sitting on the couch, her head buried in her phone.

Austin’s head falls back, and he sighs.

Looks like we have a new roommate for a while.