Ending up in Purgatory was never on Brooke’s agenda, especially since she knows exactly how many sins she’s committed. Duke, on the other hand, has only committed one major sin, but he’s stuck there, too… with his own personal demon to torment him. If Hell is for sinners and Heaven is for the divine, then what is Purgatory for? Brooke and Duke are about to find out, and they sure as hell aren’t going to like it... 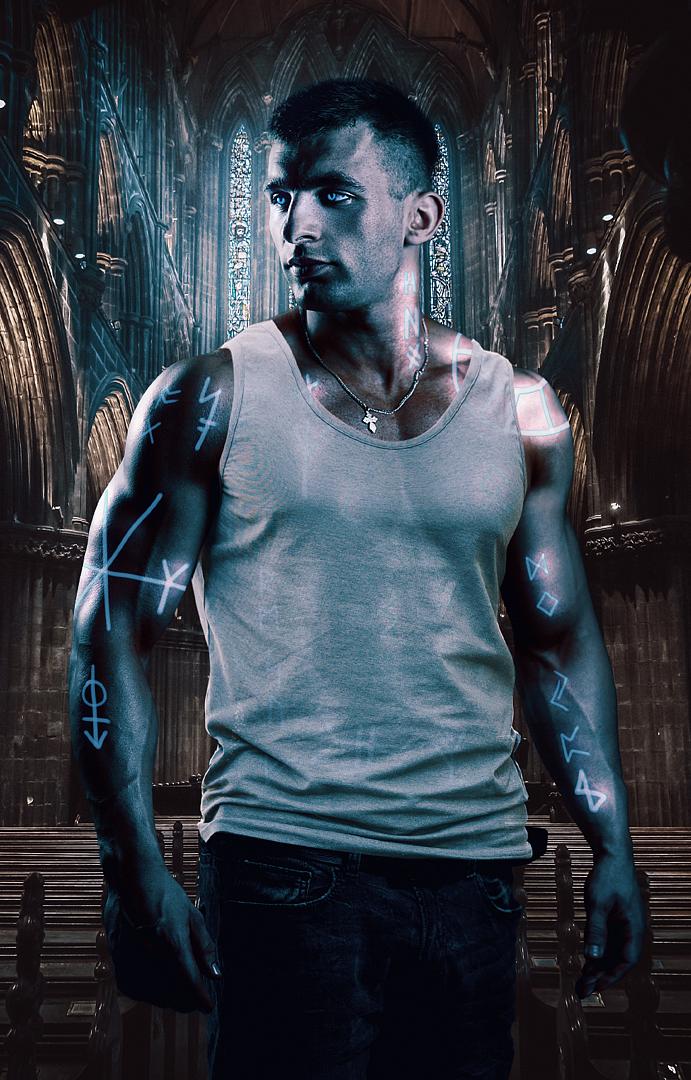 Ending up in Purgatory was never on Brooke’s agenda, especially since she knows exactly how many sins she’s committed. Duke, on the other hand, has only committed one major sin, but he’s stuck there, too… with his own personal demon to torment him. If Hell is for sinners and Heaven is for the divine, then what is Purgatory for? Brooke and Duke are about to find out, and they sure as hell aren’t going to like it...

Purgatory is a state of suffering. A place that hangs in the balance between redemption and punishment. Will you survive Purgatory and redeem yourself, or will the fates find your sins unworthy of justice?

What if you could be in charge of your own deliverance?

If you were granted the option to suspend yourself in Purgatory for a chance to make your own odds? Would you rise to the challenge, or would your secrets consume you?

What controls you? What stops you? What drives you? Where do your morals come into play?

But Purgatory is more than a game of chance. It’s the option to choose between deeds and sins. It’s the opportunity to face yourself.

Purgatory will force your hand.

Purgatory will teach you.

Purgatory will defeat you.

Will you stand back up?

Are you strong enough to face yourself? Blame is easy to place, excuses are the best method of avoidance, and failures can always be written off as out of your control. Not here.

Welcome to Purgatory, where the game never stops and the outcome isn’t guaranteed.

Purgatory was mine. My place of suspension. I made the rules.

Those who die in God’s grace are granted the experience to live in their sins as an act of redemption.

To earn their place in Heaven, they must acknowledge their sins and endure the suffering they inflicted upon others.

But death is no longer a requirement. Purgatory became mine. I will trap sinner’s souls and make it a game.

Win my game and be gifted a second chance at life.

Lose my game and join me in Hell.

Die in my game? End up trapped between realms, never living, never dying, not existing, but aware.

Tossing back the amber liquid in my tumbler, I peered through the murky liquid of the vat, admiring my latest creation.

It was human-like. Two legs, two arms, a torso, feet, hands, and a head. Its teeth were rows of black shards created for ripping and tearing.

Its nails were black, short but sharp. Its strength, inhuman; speed, unmatched; mind, programmed to do my bidding.

He is a he. An impressive male appendage sat between his legs with the ability to allure and arouse—to be aroused, to please. A body that draws attention, desire, and lust.

He is pleasure bait of the worst kind: irresistible.

I tapped on the vat. Through murky liquid, he hung in suspension. Building, evolving, creating until he was perfect.

His black as obsidian eyes shot open and started to glow an iridescent blue to signal his hunger. Black when sated, glowing blue when starved for blood, flesh, and souls—death.

He bared his razor-black teeth at me, his five-fingered hands pounding into the side of the tube, eager for escape.

“Soon,” I promised him. “Soon, you will devour these souls, and bring me the one that I want.”

For everything about my new creation was meant to draw her in.

She got away from me once, but with my new creature, my control of Purgatory, and the ruse of a challenging game, she will be mine again. He will bring her right to me.

He is mine. I control him. I control his actions and his reactions, his thoughts, and his instincts. He is a killer, a haunter, a justice bringer, a demon’s image.

There is nothing redeeming about him, and that, more than anything, made me love him.

I walked up to the tube-shaped vat, keeping my gaze locked on his glowing blue eyes as I marked him as my own. Swirls and harsh lines of black ink started to decorate his tan-toned skin.

He got my demon mark, the pentagrams that will bring him power, phrases in the demonic tongue, and runes that will grant him access to places locked to others.

I watched as the black ink embedded itself into his skin, the rush of the marking making his eyes glow bluer.

He thrashed. His black hair floated two inches above his head, his black nails scratching the surface of the vat.

I pressed my hand against the tube, watching as he studied me. He was built with my languages, my knowledge, my goals, and he was the one and only thing who would never betray me.

He has taken me centuries to create, years to perfect, and countless improvements to update. He is what will do my bidding.

My creature would be the joy of my existence, but the bane of all others.

“That is what I’ll call you,” I told him, touching the vat against his hand. “Bane.”

The name settled into his soulless body until he knew who he was. What he was.

In the demonic language, the four symbols that spell his name appeared on his upper abdomen, marking him as mine, as a living thing, as a creature of my worst creation. Bane.

There was nothing redeeming about Bane. He was meant to lure, hunt, and trap. He was built for savagery, brutality, and malice.

His heart will never know love, his absent soul will never experience redemption, and his mind will never escape the darkness. He is perfection.

“You will go to Purgatory,” I told him. “You will haunt them to create fear. You will hunt them to taste their blood. You will make them pay for the mistakes they have made, and you will bring their fears to life.”

Bane watched me, absorbing my orders as he thrashed to break free of his confinement.

“You will lure her, trap her, make her desperate enough to sin over and over again.

“You will corrupt her soul so that she can be mine forever in the pits of Hell. You, Bane, will deprive her enough that she becomes my pet once more.”

With the power of my mind, I sealed the deal on his flesh. The contract settled into the skin of his ribs, showing up in script-like writing in my native tongue.

His eyes flashed black, blue, black, and then glowed blue with the strength of the deal. He became hungry for her soul. He would devour it to make her soulless.

Once her soul was consumed by another, she would have nowhere to go but Hell. She would be mine.

“Are you ready, my creature?” I asked him.

The liquid in the vat turned even murkier with the stain of his darkness. He was a disease, infecting others with his tainted energy.

He would consume light and turn it into nothing until darkness was all the person knew.

He would make them void, and when they had nothing within them, they would embrace that darkness with desperation.

As a high demon without a soul, Purgatory was inaccessible to me, but Bane has access because he was neither a demon nor a human. Bane was nothing. And nothing was granted access to Purgatory.

I pressed a button on the wall of my lab, the dark, swirling liquid started to drain from the tank as Bane stood on his bare feet for the first time. He was tall, built, a pillar of ruined strength.

The liquid drained to flood the stone floor, sloshing against my boots as I stood above my creation. The walls of the tank dropped until he was in front of me, my property, my hunter, my destroyer.

“Bane,” I addressed him, his eyes glowing blue. “You will enter Purgatory under my command. Your hunger will be satiated, your instincts allowed to be fulfilled, and your desires will be met.

“If you bring her to me. Corrupt her, make her a sinner, do not allow her to redeem herself. She will be mine, and you will be the one to bring her to Hell. Do you understand?”

Bane cocked his head to the side. The movement was robotic, unnatural, unhinged. “Yessss,” he hissed, tasting the English language for the first time, his tongue clacking off his black teeth.

Knowing I had complete control over him, I stepped forward, close enough to feel his consuming void. “Break my command, and I will eradicate you.”

“I am your master. You are my creation. You do not exist without me.”

“You will do my bidding, and when the job is done and she is once again under my control, I will free you.”

“You exist for one purpose, and that is to follow me. Do you understand?”

It was time. I thrust the Blade of Obligation into the heart of Bane. He remained stoic, unable to feel pain.

“You are mine to wield, mine to control. You belong to me. You will enact my actions, carry my wrath, serve me justice. My mind is your mind, my life is your life. You exist to oblige me.”

I bound him by oath. Removing the blade and slicing my own palm, I held it out to Bane. “Drink from me and forever be Oathbound to your creator.”

Although a demon, I was capable of pain. Bane’s row of black razor teeth sank into my palm.

His eyes surged with a blue glow as he drank my black blood to bind our fates; me as the master, him as my puppet.

His power brimmed within my body, my eyes shutting in a heady mix of adrenaline, power, and pure evil.

Bane’s gaze lost its glow, reverting to the depthless black that filled his entire eye; no white, no color, no pupil.

The smirk that spread across my lips was as satisfying as it was anticipatory. Soon, she would be mine again. Because I controlled Purgatory now, and I just embedded it with the greatest weapon ever created.