Seventeen-year-old Evie Chase has it all: fame, fortune, and the singing career of her dreams. But after struggling with anxiety and the pressures of superstardom, Evie returns to her small hometown, facing old bullies, new friends, and the boy she left behind… 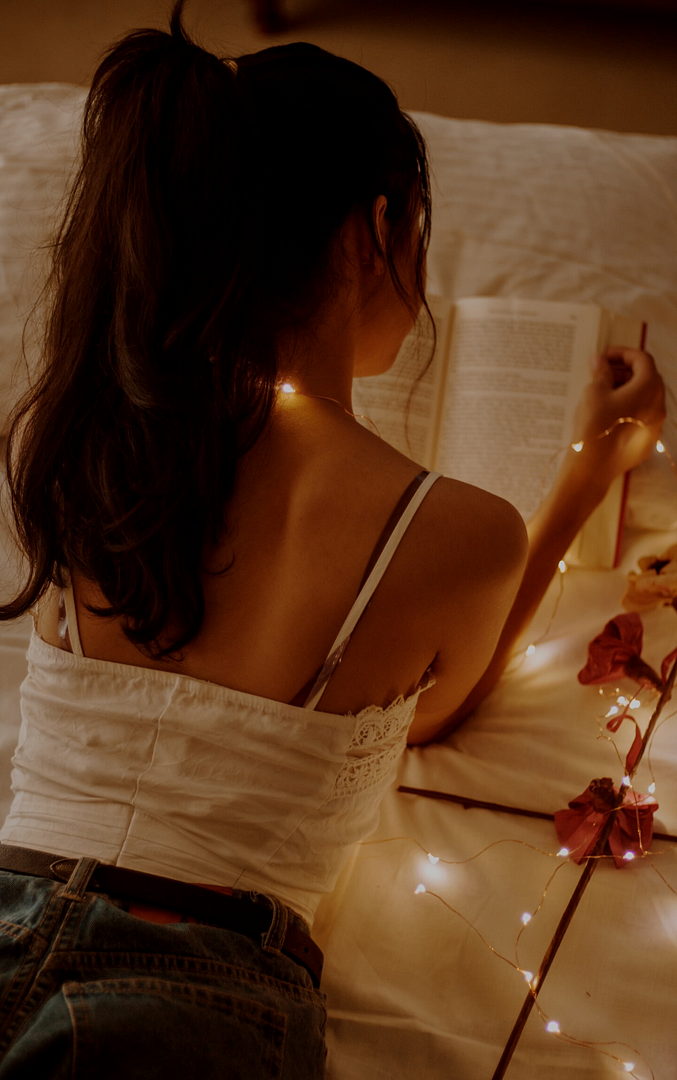 Seventeen-year-old Evie Chase has it all: fame, fortune, and the singing career of her dreams. But after struggling with anxiety and the pressures of superstardom, Evie returns to her small hometown, facing old bullies, new friends, and the boy she left behind…

I tried my best to focus on steady breaths, in and out, as I stared deep into the blinking camera lens. Its cold, unseeing eye glared back without emotion, only judgement.

“Smile, doll! Beam! Glow! Sparkle like the star you are!” Damon, the photographer, said.

I don’t feel like much of a star right now, I thought.

No matter how many empty compliments the photographer tossed in my direction, photo shoots never failed to make me feel extra self-conscious. Adrenaline pumped through my veins as my fingers knotted together.

The lights of the flashbulbs bouncing off the white backdrop were blinding, and the fact Damon had a fan going to achieve a windblown effect was making my eyes dry.

“You’re a queen! A role model!” he continued cooing, even though I could hear the insincerity in his voice. “You’re Evie Chase!”

That only dropped my confidence and peaked my anxiety further.

“Evie, are you listening to me?” came another voice.

I jerked to attention. “Oh, sorry, Pam. What did you say?”

My publicist, Pam, was sporting an unassuming black dress, bluetooth headset in one ear, credentials around her neck, and—despite the fact that evening was approaching and we were crammed inside—sunglasses atop her high bun.

Pam had always been two things: loud and blunt. But she worked her butt off for me, and I appreciated it more than anything.

“We only have an hour ’til we have to whisk you off to the premiere. Or…” She checked her smartwatch. “Fifty-six minutes. The limo will be here shortly.”

Right. The premiere for my older sister Cassidy’s latest movie, a series in the superhero franchise, Dark Titans.

The whole family would be in attendance. All three Chase sisters.

With me hard at work on my second album, Cassidy constantly away on press tours with Dad by her side, and our younger sister, Addison, running all over the place for modeling gigs with Mom’s assistance, we hadn’t all been in the same room together for nearly five months.

Was it ironic that our once close-knit family only saw each other at fancy, highly publicized events these days? More frequently on the red carpet than in our own home?

Pam stood across the room with my tour manager, Sophia, as the photographer clicked away.

“We’re running through your upcoming tour dates. This clearly concerns you, so you may want to listen carefully,” Sophia said.

“Okay,” the photographer said, clearly getting impatient, “give me fierce! Throw a hand up.”

Fidgeting awkwardly with my hands again, I glanced at my nails. They matched the daring red pantsuit selected for this full-blown glamour production.

The color and crisp fabric certainly came off as far bolder than I felt.

Mom had some off-white gown in mind for tonight, I recalled with a slightly exhausted inward sigh. Another complete change of outfit, shoes, accessories. I would need new makeup and hair done.

“Evie, darling, look up, for Christ’s sake,” the photographer demanded. Forcibly kinder, he added, “Let’s see those brilliant hazel eyes of yours!”

I obliged reluctantly as Sophia barreled on down her list.

“So then immediately following the afterparty, we’ll take a red-eye overnight from Chicago to Miami for that festival performance on the beach,” Sophia said.

“Don’t forget we’ve got that charity brunch the following morning, so you’ll need to go straight to bed after,” Pam added.

“Your hands, Evie! They look like claws. Relax a little. We want fierce, not wicked witch!”

I knew I needed to relax, even without the wicked witch comment.

My entire body was tense, and my fans would be able to see that.

Show them you’re having the time of your life, I thought. ~They want you smiling, healthy, and on point.~

I consciously loosened up my shoulders, arms, and hands as the photographer continued to click away.

When I was younger, I’d only dreamed that this would become my life—a legitimate career in music, the opportunity to share what I love with millions, using it to make people happy, bring them together.

Never once had I imagined it was really possible for someone like me.

Yet, here I was, living out my fantasy.

Occasionally, my thoughts wandered backwards to three years earlier. Before my family and I moved to L.A. and my career began.

Everything had changed so drastically since then, sometimes it made my head spin.

Time of your life, I reminded myself as I attempted to hold a confident posture.

Am I still too stiff?

“And then we have the evening performance in Orlando…” Sophia continued.

“She’s got the press event right beforehand,” Pam reminded her, before briefly glancing my way. “You’re good with red carpet right before that, right, Evie?”

My mind was starting to slow down, to muddle, to drip…

Already on to the next topic, Sophia asked, “Can you do two shows in one day, Evie?”

“She can,” Pam confirmed. “Absolutely. You did on the first tour, right, Evie?”

“Posture, Evie! Fists on hips, chest out, shoulders back, chin up.”

Wait, what? Fists on chest? Shoulders up? Chin back…?

I struggled to contort my body into some satisfactory shape that would fulfill even half of those instructions.

But the orders and questions, barked at me from seemingly every angle, were beginning to blend together…

I was slowly being overtaken by a familiar, heavy knot in my chest.

I couldn’t. I was frozen, and the knot only became heavier.

“Evie, are you even listening?”

I choked, unable to swallow down my panic.

Who is she? Who is Evie Chase?

In that moment, my superstar persona struck me as nothing but an enigma. I seized up with tension.

I mumbled some incoherent excuse and ducked out of the room in a flash, leaping over wires and cords. I moved my feet quickly, in search of a restroom.

I fought so hard, but even basic numbers made no sense.

Finally locating a bathroom, I flung open the door and darted to the mirror. I grasped the edges of the sink, holding on for dear life and panting heavily.

And then, out of my control, my mind began to reel like a projection screen gone haywire. It flipped rapidly back through the years…

I was sprinting to the girl’s bathroom, tears flowing freely down my cheeks.

I passed Valerie, who stared at me, dumbfounded.

She may have been my closest friend, other than Adam, but she’d never known anything about how I really felt about him.

With her, I always made sure to act like the only girl in school who wasn’t enamored with Adam Fields.

All my deepest thoughts and feelings, hidden inside the worn pages of that book, had just been exposed.

My greatest fears and secrets.

My daily anxieties over even the simplest tasks.

How much I hated being me sometimes.

The fear that I’d never measure up to Cassidy, or be as loveable as Addison.

And my undying love for the one and only guy I thought could really understand me.

All of it was no longer only mine. It belonged to the entire student body.

I fought to keep my breathing under control, but that was impossible.

Because one of my greatest escapes, my passion and release, had just been used against me.

And the one person in the world that I counted on most was my prime suspect as the one who’d sold me out.

Just breathe. Save your panic for later.

You can’t do this now, not right before Cassidy’s premiere.

But sweat prickled on my skin. An anvil weighed down on my chest.

The symptoms begged for my attention.

Why is this happening now? I questioned, curling my outstretched fingers into fists.

My struggles with anxiety weren’t new. They dated back to when I was a little kid, when everyone thought I was just shy.

Adam was my only close friend at the time, and then eventually my classmate Grace, had turned our duo into a trio.

Besides my family, Adam and Grace were practically the only people I talked to.

Then, one of my elementary school teachers told my parents about a possible anxiety disorder. I started working with our guidance counselor to manage it.

Deep breathing, therapy, and exploring my love of music and writing made a difference, but the most important thing was my strong support system.

By the time seventh and eighth grade rolled around, I almost felt like I was cured, thanks to encouragement from my parents, sisters, Adam and his family, Grace, and eventually fellow “nerd,” Valerie.

Until my entire world was shaken freshman year in the school courtyard, seconds before I’d fled into that bathroom.

That’s when my precious support system—the one I relied so heavily on to keep me sane—started to crack and crumble.

With white-hot frustration, I slammed my fist down on the sink. My anxiousness was transitioning into anger.

I began to pace.

I couldn’t get out of my own head. I was getting anxious about being anxious! I’d become constantly in fear of having a breakdown.

I hadn’t felt this way since those days of crying or puking basically every morning before school.

But now it’s like I’m reliving it all over.

As if on cue, the tile walls around me began to cave in, the floor liquefied beneath my already unstable heels, and the mirror morphed into one you’d find in a funhouse.

My tongue and throat dried up into sandpaper.

And in the wavering, distorted reflection, right before total blackness consumed me, I watched myself collapse.