Emily hasn't seen Kevin since she was a bridesmaid in his wedding. With both of their marriages over, she runs into him at the grocery store. A pool party at his house opens her eyes to new ways of exploring her sexuality. Will they remain friends with benefits, or have their feelings grown too deep? 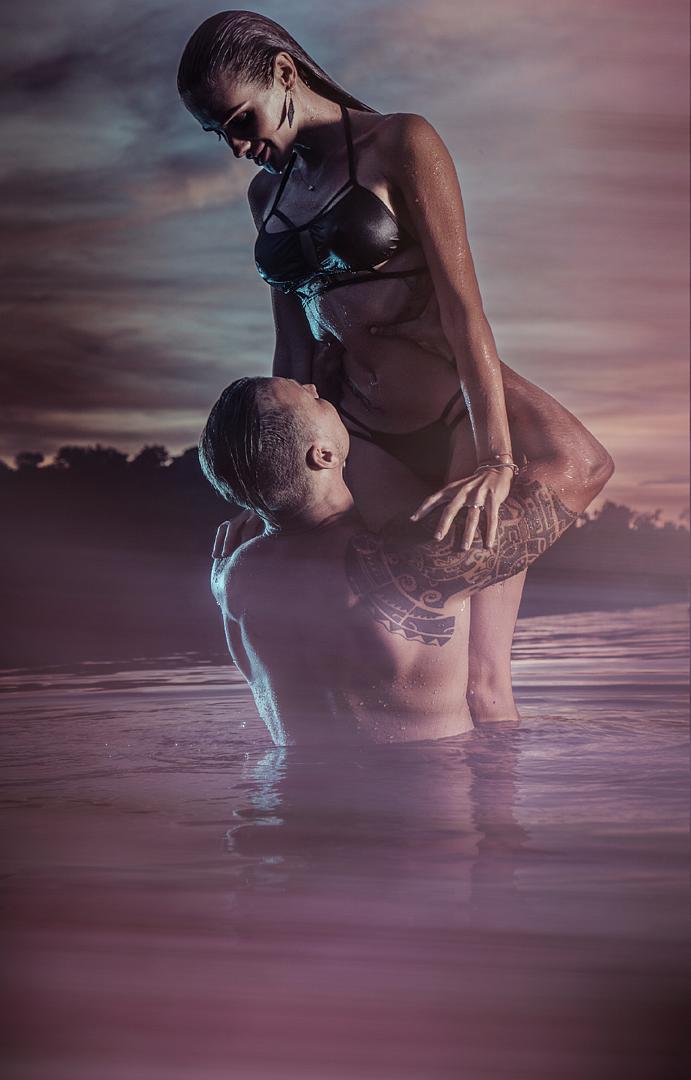 Emily hasn't seen Kevin since she was a bridesmaid in his wedding. With both of their marriages over, she runs into him at the grocery store. A pool party at his house opens her eyes to new ways of exploring her sexuality. Will they remain friends with benefits, or have their feelings grown too deep?

Today is Friday. I usually go shopping on a Saturday, so I decided to go to the grocery store and pick up a few things for the weekend.

I pull into my usual parking spot away from everybody else. I double check my list to make sure I got everything I needed. Then I hear a bang and my truck does a little shack.

“What the hell?” I get out to find a shopping cart that had just hit my truck. I look to the front of the store to see a teenager standing there waving his hands.

“Sorry, I missed the cart return,” he says, and starts running away.

What the fuck! I bend down to wipe the dent with my finger like it was going to magically disappear. I start to storm up to the store and grab the last shopping cart there is. I pull it out, and guess what? It’s got a flat spot on one of the wheels. Thunk, Thunk, Thunk.

This day just keeps getting better, I should have stayed home.

I’m almost done when I make it to the produce section. I like to see what’s fresh for the day. I start looking at the strawberries when I hear a voice behind me.

“What?” I say with a tone. “Are you here to apologize about your teenager for putting a dent in my truck? I don’t think an apology is going to take the dent away,” as I turn around to face her.

“No, I don’t have any kids,” she replies as she backs up a few steps.

I look at her and apologize for being an asshole. “Look, I’m really sorry. Some kid hit my truck with a shopping cart and put a nice dent in it.” She looks at me and says, “It’s ok.”

She stands in front of me, this beautiful woman. She looks like she’s about 5ft 6in with brunette hair that is cut to shoulder-length.

I’ve never seen a girl with the most beautiful blue eyes wearing a grey tank top and dark grey yoga pants that clung to every curve she had. You could tell she worked out.

“I was wondering if you are Kevin Wells?” she asks.

“Depends on who’s asking. Do I owe you money?”

“Me and no,” she says really quickly. “Are you Kevin Wells?” she asks again.

“I’m Emily Turner, soon to be Emily Adams. I was a bridesmaid at your wedding. Don’t you recognize me?”

I look at her with a little confusion, still can’t put a name to the face. “You do know the wedding was like eight years ago. If I don’t remember, please forgive me.”

She looks at me for a second and pulls out a photo from her phone and shows me.

“That was me back then, I was a lot heavier then,” she says.

I take her phone from her and look again. “This, is you?” She nods her head yes. “Now I remember, you were one of the bridesmaids for my ex-wife. Wow, you look good.”

I mean damn she looks good. My cock started to stand at attention. Trying to move around, so she can’t see my excitement, I ask, “So, how have you and your husband been doing?

I snap my fingers. “Now I remember who he was. He was the total dick at the wedding. He just sat there telling you what to do, ordering you around, getting him drinks and his food. My best friend wanted to take him out back and beat the shit out of him.”

“Well, I wish I’d known that then, because I’d let him. I just wished it didn’t take me nine years to realize what a mistake that marriage was,” she says.

“Wait, You said earlier your ex-wife. What happened to your marriage?” she asks.

“Well, just like you. I wished I knew sooner. She was in it for the money. It wasn’t about love.”

“I’m sorry. I really thought you guys were going to make it. I thought I knew her better than that. I was wrong,” she says.

“I’ve been divorced for about fourteen months now.”

“Well for me we’re just separated at this point. We’re going through the whole divorce thing now, but we keep away from each other as much as possible. I mainly stay at my girlfriend's one-bedroom apartment. The couch isn’t forgiving,” she says with a small laugh.

She had the cutest little laugh. My dick was almost at full attention. I try not to adjust knowing she’s watching me. So I grab my shopping cart and pull it closer to hide my hard-on.

“Hey, do you think we could get some coffee sometime and maybe catch up a little?” she asks.

“I have something better. I’m having a pool party at my place in two weeks. Would you like to come over?”

“Sure, I would love that. Can I bring a friend?”

I take the note from him and stick it in my waistband. I could tell he was trying to hide his erection from me. Knowing I made him hard by just looking at me made me feel good.

In fact, I was getting a little wet myself watching him squirm around trying to hide his erection. I could see he was doing well with what he had in his shopping cart.

He looked good since the last time I saw him. He definitely works out, cause the shirt he was wearing was a little small. It showed off his arms and chest muscles.

Watching him hide behind the cart, I could see that he’s packing.

We say our goodbyes and go our separate ways. I get in my car and pull out the note. I unfold it to read his address and time with a little note at the bottom that says clothing optional.

I don’t know what that means but I’m going anyway.

I drive over to my girlfriend's apartment to tell her what happened today.

“Madison! Where are you? I have something to tell you.”

“What’s with that smile? I haven’t seen you smile like that in a long time,” she says.

“I ran into Kevin Wells at the grocery store today, and guess what?” Madison looks at me like Kevin who?

“Remember the wedding we went to about eight years ago? It was Kevin and Angelia’s wedding, and I was a bridesmaid.” Mad’s eyes got really big.

“Kevin! Now I remember. He was the good-looking one there, and his best man was hot too. What was his name?” she says as she snaps her finger.

“Yeah, well she left him fourteen months ago, and he’s been single ever since.”

“How do you know? Did he just come out and say, ‘Hey I’ve been single since she left,’” Madison says with a little laugh.

“Pretty much, yeah. That and what he had in his shopping cart screams single.” I pull the note from under my waistband. “You got any plans like say in two weeks?”

“Wanna go to a party like maybe a pool party?”

“Kevin. He invited us to come by and have some fun,” as I open the note and show her. “See! He even gave his address and what time to be there plus his phone number.”

“What’s that say at the bottom? Clothing optional?” she says.

“I’m thinking it’s a naked pool party, if you wanna get naked,” I say with a crazy smile.

“If we’re going, we need new bathing suits especially, for you girl. I’m going to find a suit that’s going to make those big tits pop and make his jaw drop. And no more one piece,” Madison says with excitement.

Before I knew it, we were out the door.