Lycidas, a powerful vampyre, is able to weaken those around him by his presence. His power is difficult to control so he has no intention of getting close to anyone—he thinks of himself as a monster. Adrasteia is just about to become a vampyre but before her transition begins, her parents are brutally murdered. Attempting to transition on her own, she is saved by Lycidas who takes her as his fledgling. They both end up getting much more than they bargained for. 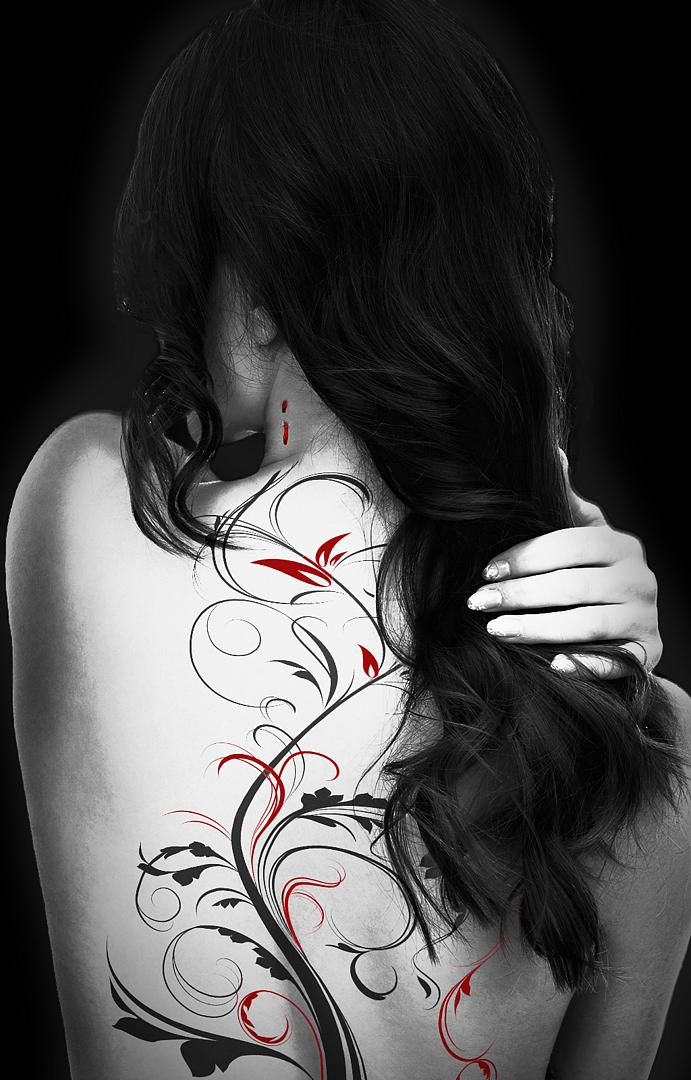 Lycidas, a powerful vampyre, is able to weaken those around him by his presence. His power is difficult to control so he has no intention of getting close to anyone—he thinks of himself as a monster. Adrasteia is just about to become a vampyre but before her transition begins, her parents are brutally murdered. Attempting to transition on her own, she is saved by Lycidas who takes her as his fledgling. They both end up getting much more than they bargained for.

Book 1: The Tale of Sloth

Lycidas wasn’t in the mood for this drawn-out dramatic bullshit, and he could tell that his Council wanted to get away from him immediately. His jaw tightened as he stood from his kneeling position behind the pew.

He hated their monthly affirmation of Artemis at the Artemisium Temple. All she did for him was make him a ruthless murderer that didn’t even want to kill—a physical manifestation of death and destruction.

Their congregation was outside, below her statue, so he could see the moon displaying its rays on everyone. He hated the fucking moon.

As the chime rang throughout the field of vampyres, he stuffed his hands in his khakis and made a beeline for the exit.

He turned toward his Council brother, who was jogging toward him with a charming grin.

“Always. No difference this month.”

Lycidas often wondered how none of his brothers had found their beloveds. He never wondered about his.

In fact, he actively tried to ignore the sting of desire to have one. In times of weakness, he longed for his beloved, but fuck that noise—he couldn’t ruin some female’s life with the curse of him.

“We got word that a few hunters were sniffing around Neon Lights. Zanthus and I were gonna check it out. You down?”

He hated the smell of humans. They were nauseating to be around, but he forced himself to be in their world because, if he didn’t, he wouldn’t be able to leave the compound.

Like it or not, he lived in their world, but they didn’t live in his. He had to bend to their rules, at least until they said something that annoyed him.

He kept a hard stare on the light above the bar. It swung slowly, as if they were on a rocking boat. He couldn’t resist a little chuckle from the irony. He stood at the mahogany bar, a glass of whiskey in his hand.

He could sense Quillian on the other end, near the bathrooms, sipping on whatever the hell he was drinking. Zanthus was brooding near the entrance, not drinking.

For a moment, Lycidas and Quillian locked eyes, sharing a mutual message of this fucking sucks.

Lycidas smelled the familiar stench of hunters. They wore incense as a means of spiritual guidance or some shit. He didn’t understand it, nor did he want to.

Hunters did what they did best: hunt. They sought to bring the vampyric race to extinction.

They firmly believed that this world was for humans only and the presence of vampyres was some type of disease that damaged the earth.

If you asked Lycidas, humans were what made the earth so unhealthy, so filthy, so…unforgiving. Clearly, they didn’t see eye to eye.

Lycidas took a swig of his drink before setting it back down on the bar and walking away. He went outside to the alley, and the hunters followed.

Lycidas turned, grinning slightly at the three that followed him. “Ladies,” he greeted.

“Bloodsucker,” one responded. She unsheathed her stake as her sisters pulled out their other weapons to bring him to his death.

“Damn, what a shame,” Quillian said, boxing them in between all the Council members. “You would be kinda hot if you weren’t such a bitch.”

“Enough, Quillian,” Zanthus chastised. “Don’t play with your food. It ruins the meat.”

“Shall we get started?” Lycidas’s eyes brightened even as they were darkening. He bared his large fangs before attacking the hunters before him as Quillian and Zanthus followed suit.

Adrasteia quietly removed the covers from herself and got out of bed. She winced as the floorboards creaked underneath her. Her parents had excellent hearing. Any noise would wake them from their sleep.

It was daytime but even so, she was rarely allowed to leave. They’d kept her sheltered in this house for years, not allowing her to attend human school.

She was tutored in their home, where she lived out her long nights and even longer days.

Her parents were vampyres. Her mother was an ex-priestess who left her duties for her beloved. Adrasteia’s father was a diplomat between vampyres within the kingdom.

Because of their status, it was of utmost importance to protect their only fledgling. They prayed that her beloved would hold the same or better status.

Please. Adrasteia wanted her beloved and couldn’t wait to find him or her, but she knew better than anyone else that she wasn’t deserving of an elite beloved. She was too tainted. Too fucked up.

She opened her bedroom window and slipped out into the sun. She knew her transition would come soon, but for now, she wanted to enjoy the sun without the burning sensation. She was human.

She could venture into the sunlight. She loved the sunshine. She laughed softly as she shut the window behind her. It was ironic that she had to sneak out to attend classes.

She was no angel. She enjoyed a good Smirnoff. She enjoyed smoking a blunt here and there. She enjoyed loud music and bright lights and making out with humans she found attractive.

She wouldn’t call herself bad, but nor would she call herself good. She was somewhere in between. But who the hell was she to label good or bad? She was nobody in a big vampyric-human world.

The girls laughed as they ran toward each other. Adrasteia loved her best friend. Astella wrapped her arms around Adra’s neck, pulling her in for a joyous greeting.

It had been a few days since Adrasteia had been able to sneak out. She snuck out for many reasons, but always during the day as her parents were wide awake at night.

She snuck out to see friends, to go to parties, to attend her college classes…anything she couldn’t do at home, she did during the day.

“There’s a get-together at Delta later. Do you wanna go after our class? I heard Chase is gonna be there,” Astella teased.

“Say less, ma’am. Catch me doing a keg stand at”—she dramatically looked at the watch on her wrist—“three in the afternoon.”

“You drink like a sailor! I don’t know how you do it.”

“Yeah, which is surprising as hell, considering you’re, like, four-eleven.”

“Yes, they do! An inch changes everything,” Adra said with a rise in her tone. She wiggled her eyebrows to reinforce her innuendo.

“Damn, why are you always right?”

“Don’t you fucking forget it!”

Adrasteia kicked her feet down, and the men who held her up helped her to the floor. With a proud smirk, she lifted her hands, showing that she was the conqueror of the keg.

“Yeah, and lose to you?” Chase asked, raising his beer can. “No, thank you. I don’t want to lose my dignity again.”

Adrasteia smiled, nodding. She didn’t want to force him into drinking. That was never okay.

She could see Astella in the corner, playing pool with some of the frat brothers. She must have made the pocket because she yelled and threw her hands up with pride.

“Aight, you must be cheating,” Thomas said to Astella.

“Am not. Give me my ten,” she said, holding out her hand. Her eyes widened as she saw her friend come toward the pool table. “Adra!”

“Adra, what the hell—girl code!”

Adrasteia laughed, holding up her hands in defense as Astella handed Thomas back his money.

About thirty minutes later, the girls left, Adra helping Astella walk straight back to her apartment.

Astella was so lucky. She attended the same community college Adra did, but she could go out and live with friends. Adra envied her sometimes.

Astella clung to Adra as she pulled her into the apartment. “Adra,” she hiccuped. “You’re so beautiful. Like so pretty! Do you know that! Never let no son of a bitch tell you otherwise. D-do you hear me?”

“I hear you,” she said, chuckling. She walked Astella to her bed and laid her down, taking off her shoes and grabbing a makeup wipe.

She took off Astella’s makeup and got her into pajamas before leaving a glass of water by her bedside. As she looked out the window, she gasped, seeing the moon crisp and clear through the window.

She checked her phone. No messages. Weird. Her parents should be freaking the fuck out.

When Adra got back into her room through the window, she was expecting her parents to be waiting with stern, upset faces.

But she didn’t see that. In fact, she saw nothing. It was completely dark in her room, and when she went into the hall, it was dark there, too. Odd. Her parents always turned on all the lights once night fell.

As she turned the corner, she saw the door to her parents’ room wide open. She walked toward it, sensing the life-changing moment.

She fell to her knees, covering her mouth as a silent scream left her lips. For a moment, she was stuck on the floor, unable to move.

She picked up her body, moving to her parents. Her father’s body was on the floor while his head was on the other side of the room, near her mom’s dresser.

She knew that her father had woken up first and tried to save his beloved. He tried to throw himself in front of whoever did this so they couldn’t hurt her.

Her mother was lying on the bed. Her head was laid right beside her. Her beautiful dark ’fro was still vibrant and perky as if the events had never occurred. But there she lay, bloodied, her negligee ripped.

Adra could tell by the rips that something else was done to her. Something horrible. She couldn’t bear to even think about it.

When she was able, she called the Council. Her parents always explained that if something happened to call the Council. Vampyres knew never to contact human services for problems of this latitude.