Someone is playing a deadly game in Queensland, Australia. Across the city of Brisbane, a series of suspicious deaths begin to crop up—and all of the cases involve snakebites or stairs. Detective Sergeant Darryl Kimberley is on the case, but can he anticipate the next roll of the dice before it’s too late? 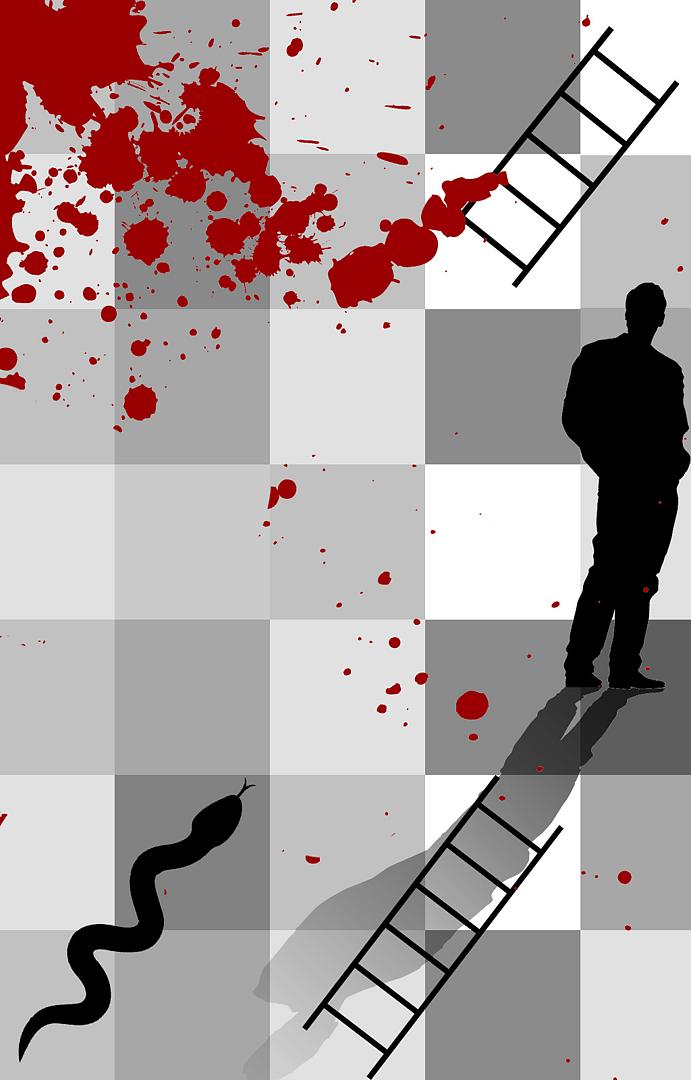 Someone is playing a deadly game in Queensland, Australia. Across the city of Brisbane, a series of suspicious deaths begin to crop up—and all of the cases involve snakebites or stairs. Detective Sergeant Darryl Kimberley is on the case, but can he anticipate the next roll of the dice before it’s too late?

Simone had seized her courage with both hands before turning around to confront the man behind her.

Her heart was now lodged in her throat, her guts had twisted themselves into tight knots, and she felt as if she might die on the spot.

Be confident, Simone. ~Fake it until you make it.~

The man’s footsteps had joined hers shortly after she entered the alleyway, and she had been regretting her decision to take this shortcut ever since.

The man had stopped walking the instant she turned around but, in many ways, his unnatural stillness was worse than his calculated footsteps.

If he was a random pedestrian who had chosen to shorten his journey by taking this alleyway, just as she had done, why was he hanging back there in the shadows refusing to say anything?

She made sure to keep her voice sunny and genial this time.

People in Brisbane were used to talking to each other on the street, used to exchanging bland chatter with strangers.

The harsh tone of her original question might have confused him, made him wary.

“Did you get caught in the thunderstorm that came through earlier? I swear the hail was the size of cricket balls! I shudder to think of the mess it’s made of my car,” Simone said.

The man remained in the shadow of the wall, his face hidden, saying nothing.

“My boyfriend is waiting for me down on the street,” she lied. “He’s the nervous type. I’m expecting him to come running up the steps at any moment now. He doesn’t like to be kept waiting and he’ll be looking out for me.”

There was no still response from the man. He had tucked himself in closer against the wall, sheltering his body in the natural shade thrown by the high concrete structure.

From here, Simone thought he was wearing a long dark coat and dark jeans, but she could be mistaken. Whatever it was, it certainly wasn’t suitable for this muggy Queensland evening.

She was hot enough as it was in her sleeveless red dress and strappy sandals. She was also wearing a minimal application of makeup, just enough for the office, but she was sweaty and greasy despite the thin layer of cosmetics.

The frisson of fear now creeping up her spine wasn’t helping her comfort level.

The man remained an anonymous shape back there in the shadows—a living, breathing person, yet he was displaying none of the courtesies she had grown to expect from the people she engaged with.

What was wrong with him? What sort of person refused to respond to a greeting? Was he someone who had difficulties when it came to understanding the drawling Australian accent?

That could very well be the case, but it didn’t give her a satisfactory explanation as to why he was keeping himself hidden back there.

She gripped her purse tighter, holding the tiny leather satchel like a flimsy shield against her side as she slowly turned back around.

Time to move on, Simone.

She fixed her gaze on a streetlamp and started to walk toward it, gaining additional confidence with every stride. The concrete steps were closer now, a mere hop and skip away.

If she hurried to reach the bright light of the lamp and the well-illuminated area beneath it, she could run to the main road below.

She would be in full view of the stream of traffic within seconds. The busyness of the street offered her both safety and protection, even if those concepts were only in her head and not lodged in any reality.

She looked over her shoulder at the shadowy figure behind her, needing to gauge if he’d moved away from the shadows. She was aghast to see that he was striding swiftly toward her, the hem of his long coat swinging.

Unfortunately, in her panic, her mind was far quicker than her feet. She somehow managed to falter and stumble on the first stride. Her ankle turned awkwardly, and the low heel of her sandal skidded across the wet concrete.

She gasped and threw her arms out in an attempt to save herself, managing to stop the fall before the hard surface rushed up to meet her, but only just.

Her shoulder bag swung wildly on its long strap, the bulk of the purse thudding heavily against her thigh as she crab walked several steps forward, knees bent and butt jutting out.

The unyielding solidness of the lamp post was suddenly dizzyingly close, and she heard herself cry out, although she hadn’t meant to. She had always been clumsy, and she should be used to her frequent missteps by now.

Duck Feet Simone, the girl who waddles instead of walks.

That’s what they’d called her in high school. These days, she was mostly able to laugh at her ineptitude and ungainliness, but there was nothing funny about her current situation.

She grabbed at the lamppost, abruptly halting her momentum. She clung to the post and expelled a long breath beneath the welcome glare of the lamp.

Her ankle hurt, but from experience she knew the difference between a sprain and strain. She would still be able to walk on it.

The joint throbbed as she stared back at the shadows, back to the place where the man had stopped at the corner of the building, keeping himself well away from the circle of light. She hiccupped, swallowing down a bubble of bile.

He still hadn’t uttered a single word—not even to ask if she was okay when she tripped.

She hitched the strap of her bag higher up on her shoulder and summoned all the dignity she could muster to move on, ignoring the strident throb of pain in her ankle as she began to descend the steps.

The distant sound of the traffic was louder now, the familiar rumble of noise bringing her new reassurance.

In a matter of minutes, she would turn the corner at the bottom of the steps and walk along the brightly lit pavement below as buses and taxis rushed past.

This minor drama would be nothing more than a faint memory, soon dismissed and forgotten.

Within half an hour, and certainly no longer than that, she would be curled up on the couch in her living room with her foot resting on the cushions and a glass of chilled wine in her hand.

The man in the shadows could go screw himself. Brisbane was full of weirdos. Everyone knew that. The heat attracted society’s crazies and kept them here once they arrived.

Like blowflies attracted to a chunk of rotten meat. That’s what her dad used to say. He’d never had much time for Brisbane’s weirdos.

The shove, when it came, was as unexpected as it was violent. The rough push between her shoulder blades sent her flying.

She was unable to stop herself or arrest her fall as the uncompromising edge of the concrete steps smacked into her face.

The first thud hurt, it hurt like hell, and then she was no longer thinking about the pain as several more tumbling, bone-crunching thuds followed in quick succession.

Her purse cartwheeled through the air, spilling its contents in a wide arc across the wet steps.

By the time she’d plummeted down all the steps, as boneless and free-falling as a rag doll, and her lifeless body landed splayed like an ink spot across the footpath below, the pain had gone forever.

Adjacent to the swishing noise of the traffic, a tube of her lipstick made a soft, metallic plinking sound as it cascaded down several steps before coming to a gently rocking stop.

At the top of the steps, the man swiftly blended back into the shadows and was gone.