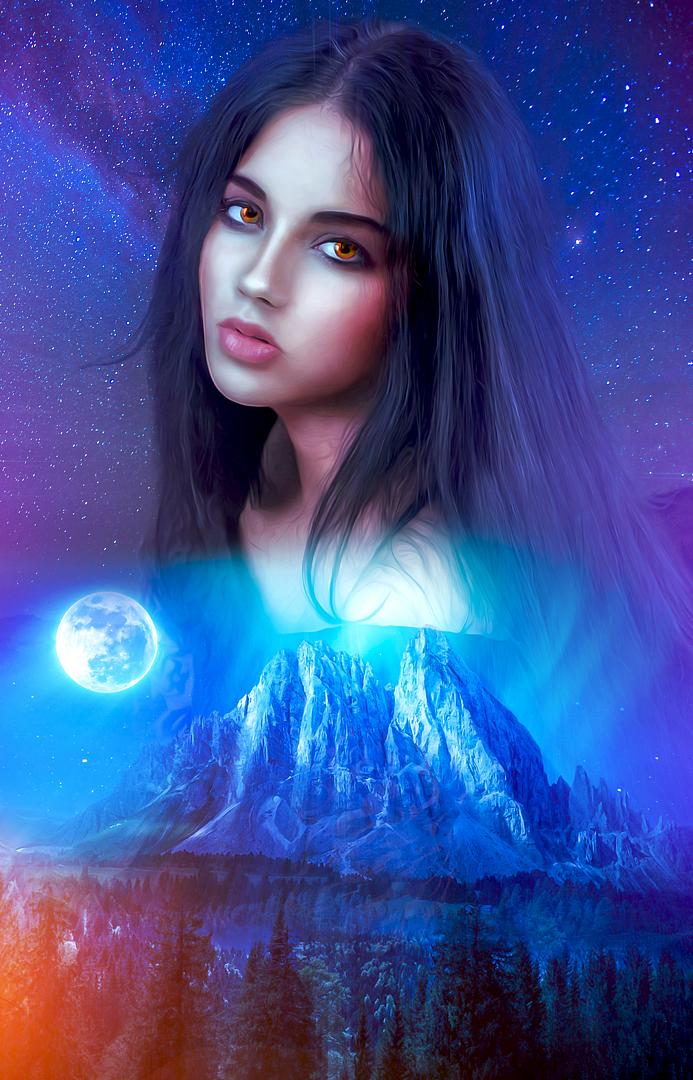 “No, Elijah! I’m warning you, don’t do it!” Sage held up her hands in front of her and slowly walked backward.

He suddenly sprinted forward. Sage screamed and ran away from him.

“No-no-no-no-no-noo-no-no, NO!” she screamed as Elijah wrapped his arms around her waist. He lifted her off the ground while she struggled to get free.

He walked toward the lake and stopped on the edge. Sage wrapped her arms tightly around his neck. “If I’m going down, I’m taking you with me!”

Elijah smirked and shrugged. “Okay,” he said and immediately jumped into the water.

Sage screamed as they fell in. Elijah released her as they surfaced. “You fucking asshole.”

Elijah laughed as she splashed water toward him. “You asked for it, cousin.”

He stuck out his tongue toward her.

Sage snorted. “You are such a child.”

He climbed out of the water before he pulled his swimming shorts up, way too high until his waistband reached his ribs, and crossed his arms. He looked over his shoulder.

Sage followed his gaze and looked toward her sisters. They were still sunbathing, caring more about getting their tan just right. She locked eyes with Elijah.

He had a mischievous look in his eyes.

“They are going to kill you.”

He wiggled his eyebrows at her and turned toward them. After taking a deep breath, he launched himself at them. Sage heard her sisters scream as he landed on top of them.

“You mother-fucking son of a bitch!” Iliza screamed at him.

“What the hell is wrong with you, you asshole!” Jessica added.

They pushed him off of them.

“Now our tan won’t be the right color!” Iliza stated as she was looking at her body.

Elijah groaned and stood up. “You guys are way too vain.”

“Says the gay who has more clothes than we do.” Jessica placed her hands on her hips and glared at him.

“Yeah right, you guys have an entire store for yourself.”

Sage rolled her eyes and also got out of the water.

Jessica and Iliza were always complaining that, to quote them, the “ugly and poor” she-wolves were always buying clothes at the same store where they liked.

So, one day they went to their dad and asked—no, that’s wrong—ordered him to give them the store.

He had refused, but her sisters did everything to annoy him with it so that he would have to give it to them.

Which was exactly what happened.

Sage dried her long midnight black hair, which came down the length of her back. She had put on Elijah’s shirt, which ended just below her butt, and walked over to the others.

“Still, you are a guy and you even have more clothes than Sage.”

“Dude, I’m not vain like you three. I have a normal amount of clothes which I’m comfortable with. I don’t need an entire store.”

Iliza rolled her eyes at her. “A wolf needs to look their best in case their mate comes along.”

Just like her sisters, she was an alpha’s daughter, but instead of being born a wolf, she was born a human. Her parents had tried to find out why but always came up empty-handed.

Eventually, they just accepted it.

Her pack didn’t care. They accepted her for who she was and were happy that she wasn’t a brat like her two older sisters.

Sage knew she would never be able to take the alpha title from her dad, but she didn’t care. All she wanted was to finish her studies and become the first astronomer of the pack.

Of any pack, for that matter.

She had always loved astronomy and astrology. Growing up, she had always wondered about the universe around her. Her mom had told her to pursue her passion and learn about it.

Sage didn’t have to hear that twice.

Soon she knew all about the constellations, the moon, the planets, and the stars in general.

Now, she was learning the Greek mythologies about the constellations. It was something she loved to learn and her imagination often ran free. She wondered if there was any truth in them.

Absentmindedly, she followed the lines of her black and white tattoo on her right forearm. She looked at it.

It was a tattoo of only outlines. The white lines and little circles formed her favorite constellation, Sagittarius, and the black lines formed a crescent moon behind the white lines.

Sage remembered the day she got it. She was with Elijah and his mate, Romeo, at the pack’s tattoo artist. Romeo was getting a tattoo of the paw print of Elijah’s wolf.

On an impulse, she decided she wanted a tattoo as well and she just knew it had to be this one, even though she had never seen the image before.

Her parents were shocked when they saw it, but they loved it nonetheless.

A gust of wind blew past them. Elijah, Iliza, and Jessica stiffened immediately. Sage looked at them. “What’s wrong?”

It was the only word he said, but they all knew it meant bad news. Everyone immediately grabbed their stuff and started walking back to the pack village.

Smelling blood could mean a lot of things, but mostly, it meant danger. Rogues were always lurking near the border and no one wanted to encounter them. Especially the Moon Gang.

The Moon Gang was a group of rogues who had fun killing entire packs. They were hated and feared.

Somehow, they always won. No matter how strong the pack was, they always succeeded in wiping out an entire pack.

Well, almost always. There was one pack they had attacked but failed.

As a pack, it was extremely rare: it wasn’t just one pack, but two.

Without much effort, they prevailed and the Gang was almost wiped out.

The two alphas would lead their own packs and territory without interference from the other, but, when necessary, they would stand together.

United as one to defeat any who challenged them.

Soon, everyone started to call them the Fire Wolf pack. Every pack feared them, but also wanted an alliance with them.

Everyone had heard the rumor that the pack houses were next to each other, close to the border which separated the territories that the wolves could cross whenever they wanted.

For humans, it was not that big of a deal, but for wolves it was. To have that much trust between two packs was rare.

Nobody knew if the rumors were true, since no one was allowed to get that close, except for the allied alphas, and even they kept their mouths shut.

Sage’s pack was also allied with them because her uncle, cousin, and grandmother all lived in pack.

When her dad got the alpha title, her uncle, Rick, moved away. He and his father, Sage’s grandfather, never saw eye to eye, and when Rick came out of the closet, things only got worse.

Sage heard the stories about how they were always fighting, and when her grandfather threatened him to take away the chance of the alpha title if he didn’t take a female mate, he had enough.

Rick had said that he didn’t want to be an alpha who had to pretend. He said he didn’t care about the title and that his brother, her dad, could have it.

After Sage’s dad was named alpha, he left with his mother. Her grandfather and grandmother also had issues, and only came back for birthdays and Christmas.

Sage always had a great relationship with her uncle. She was always happy when she saw him and she could talk to him about anything.

Her parents were different. They were always tense, especially if her uncle touched her. It was always like they were afraid that she would explode. To this day, she still didn’t know why.

The other thing she still didn’t understand was how Rick fathered Elijah. He was gay but still had a son.

Sage and Elijah always joked about how it was a drunken mistake, but they didn’t know if that was true. Rick would never tell them.

Sage was pulled out of her thoughts when she smelled a strong metallic scent. It took her a moment to realize what it was. She stopped in her tracks and looked at Elijah.

“Please don’t tell me you can smell it.” He knew that if even a human could smell it, it was bad.

Elijah, Iliza, and Jessica shifted into their wolf forms. Sage climbed on Elijah’s back. They had to get back and fast. Something was most definitely wrong!

They started running toward the village and the scent only became stronger. As soon as they entered the village, they saw a massacre.

Males, females, pups, teenagers, elders. No one was left alive or in one piece. The streets were covered with bodies. Everywhere you looked, you could see guts or torn off limbs.

The buildings were covered in blood and it was dead silent.

Tears filled Sage’s eyes and she slapped a hand in front of her mouth. This couldn’t be happening. Who would do something like this?

They were always a peace-loving pack and only fought when they needed to. They didn’t deserve this!

None of them said anything as they walked through the streets, trying not to step on anything. Sage cried as she saw the bodies of the people she knew. Doc, her teacher, her friends.

There was no one left.

They walked toward the pack house. Sage looked at the two things hanging on either side of the door: bodies.

She slowly walked forward, and when she saw who they were, she stopped and fell to her knees.

“NO!” she screamed. Her screams turned into uncontrollable sobs. She heard her sisters scream as well.

Her parents were hung up by their necks and stripped naked.

Her mother was missing an arm and her neck and chest were cut open. The bruises on her lower abdomen and the insides of her thighs suggest she’d been brutally raped before she was killed.

Her dad was missing every limb and was skinned.

Their blood was still dripping from their bodies. This was something that would haunt her for the rest of her life.

Elijah placed a hand on her shoulder. She looked at the door and rage filled her. There was a message, written in blood.

“The Moon Gang was here.”

Never in her entire life had she felt this much rage.

How can someone have so little respect for the dead? How could anyone ever do this?

No one said a thing and the sound of crying filled the air.

“What are we going to do now?” Iliza asked. Her voice was hoarse.

“I informed my dad through the mind-link. You are allowed to stay with us for the time being,” Elijah answered as he dried his tears.

“We need to bury them,” Sage said. Her voice was also hoarse.

Elijah hugged her. “And that’s what we’re going to do.”