It's the summer before her senior year, and Hazel Young is skeptical of love. But there's a new guy in town, a mysterious stranger with a troubled past. As temperatures rise, Hazel will have to confront her own misgivings: is this just a summer fling, or is it the real deal? 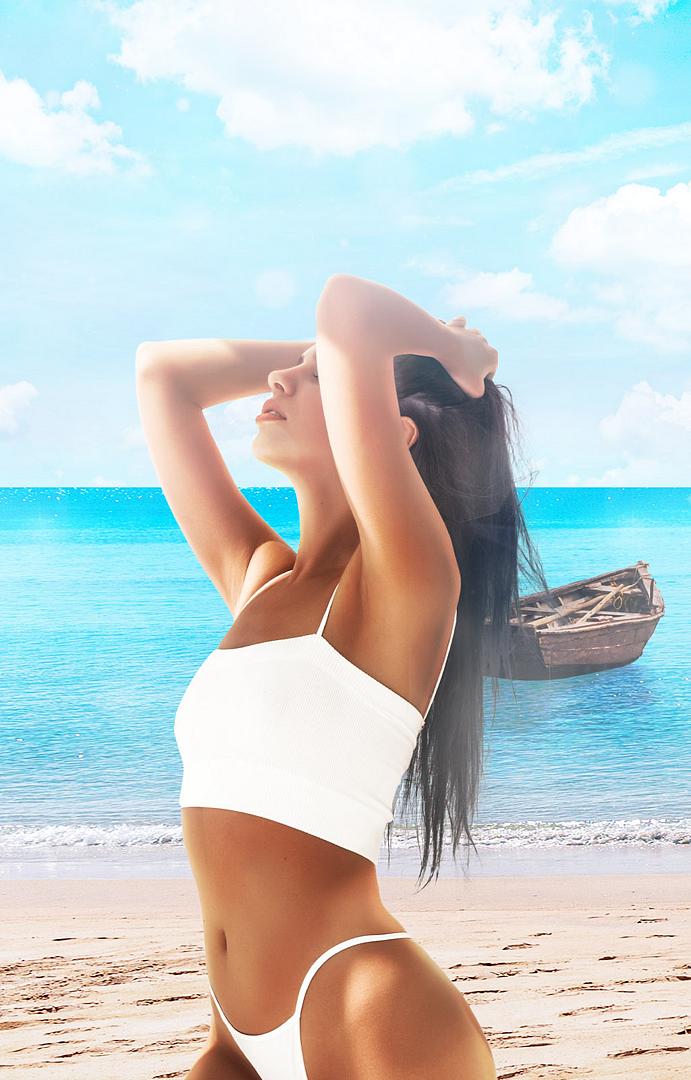 It's the summer before her senior year, and Hazel Young is skeptical of love. But there's a new guy in town, a mysterious stranger with a troubled past. As temperatures rise, Hazel will have to confront her own misgivings: is this just a summer fling, or is it the real deal?

What is love? Does anyone truly know what love is?

The dictionary says it’s an intense feeling of deep affection.

But I’ve never felt anything more than affection for anyone or anything. I mean, I love my mom and twin brother, Hayes. But that’s a different type of love. I’m talking about true love.

My parents said they were in love. They broke up when me and Hayes were six months old. We never saw our father again.

My best friend, Monica, claimed she was in love every week. Each time with someone different. Every week she would have a broken heart.

My brother was the standard school player. Slept with different girls, and then he would simply ignore them. They all claimed to be in love too.

So yeah, my feelings on love were that it was just something someone fabricated solely so they could keep whoever in their possession for the rest of their lives.

Now that summer vacation is about to start, the plan is to spend every waking minute in the sunshine at the beach, working on my tan and swimming. During the night, it is party time.

The last day of school sucked. No one wanted to do anything, teacher included. The second the bell rings, I run outside immediately and start walking home.

No way I was going to hang around with all the dramatic people hugging their friends goodbye as if they wouldn’t be seeing them ever again. Hayes included.

The walk home takes twenty minutes. By the time I reach home, a thin layer of sweat has built up on my skin.

Despite my parents being separated, Mom took great care of us growing up, and thanks to her parents, we live in a small cottage right in front of the beach.

The other houses around us are massive and filled with rich, stuck-up people. Every other day someone comes by wanting to buy our house to bulldoze it, but Mom always refuses.

Also, if she ever did try to sell the house, both Hayes and I would throw fits. We love this home. In fact, both of us have decided to go to a local college just to stay at home.

Also, because Mom doesn’t have much time left.

She was diagnosed with breast cancer two years ago. She’s been in remission twice now, but this time it’s come back more aggressive.

The doctors are doing everything they can for her, and she seems to be getting better.

“Mom! I‘m home!” I yell, dumping my bag by the doorway, which no doubt Mom will yell at me about soon.

“In here!” her voice calls from the kitchen.

I make my way in there to see her pulling out a jug of lemonade from the fridge.

“How was your last day?” she asks as I go over to place a kiss on her cheek. Normally I’m not an affectionate person, but ever since she became sick, I try to show her how much she means to me.

“It was shit,” I grumble, sitting down at the table as she brings the lemonade over.

“Language,” she warns, sitting next to me. “I’m sure it wasn’t that bad,” she continues as I pour two glasses.

“It was. No one did anything, and then all the girls were crying.” I roll my eyes.

“Even Monica?” she asks, raising her eyebrows.

“Of course,” I snort. She’d been crying since lunchtime.

“Mooommmm! Hazel didn’t wait for me!” Hayes groans, slamming the door behind him. “We need some goddamn air conditioning in this place,” he grumbles as he enters the kitchen.

“You wound me, dear sister,” he says dramatically, clutching his heart before stealing my half-drunk glass of lemonade.

“Give it back!” I scream, jumping to my feet and trying to grab the glass out of his hands. But he’s too quick. He slams the glass back onto the table and smirks down at me.

“You’re such a fucking pig!”

“And you’re a fucking bitch!”

“Kids!” Mom scolds us, making us both stop yelling at each other.

“Sorry,” we both mumble and sit down at the table, both pouting. Guilt overcomes me. Hayes and I are super close, but we fight like cats and dogs.

When Mom got sick, we made a pact to stop fighting in front of her because she gets really upset. She always reminds us we’re the only family we have and we need to cherish it.

I always rolled my eyes at her words, but when she got sick, I finally understood what she meant.

“Do they still do that bonfire?” Mom asks, referring to the last-day-of-school bonfire that is held on the beach every year.

Everyone is welcome to come, freshmen included. It’s been going on since my grandparents were in school.

Hayes and I share a look. Mom knows it still happens. We’ve gone for the last two years.

“Yes, Mom,” Hayes confirms, nudging my leg with his.

“Oh. Are you going?” she asks, clearing her throat, frowning slightly.

As I look at Mom, I notice the dark circles around her sunken eyes. She’s lost a lot of weight over the last month and is looking frailer and frailer by the day.

“We go every year. Remember, Mom?” I whisper, biting my lip.

“Oh right, of course. Silly me. Just being forgetful,” she laughs.

“We can stay home,” Hayes offers, his voice wavering like he’s going to cry.

“I know,” I giggle, helping her stand up, stumbling a bit myself.

“I love you. More than I love Cameron,” she tells me.

“I’m way cooler than Cameron!” I laugh as we sit down on one of the logs in front of the fire.

“Who’s Cameron?” a male voice from next to me asks, making both me and Monica jump and fall into a fit of laughter.

“He’s the love of my life,” Monica slurs, leaning over me to talk to the stranger.

“This week,” I laugh, looking at the boy.

I’ve never seen him around here before. And I’m not just saying that because I’m drunk. I mean, this guy is hot as fuck! I’d remember seeing him.

He’s got dark hair and light eyes, but I can’t see the color properly because of the bad lighting. His face looks so symmetrical and perfect.

“Ah, young love,” he chuckles, shaking his head slightly before sipping from the red cup in his hands.

“Please tell me you believe in love, ’cause this bitch is heartless,” she says, leaning even more and spilling some of her beer on my leg.

“I am not!” I exclaim, wiping some of the sticky beer away, not really caring about it.

“You so are! Just asks Hayes!” she exclaims loudly, making the stranger laugh. “I’m going to find him!” she states before stumbling off.

“Are you new?” I slur to the stranger.

“Yup! This town is sooo boring!” I draw out.

The town is tiny. Like, less than a thousand people live here. The only good thing is the beach.

“The beach is nice,” he comments, nodding toward the ocean like he’s reading my mind, and I gasp.

“Hazel! Hazel!” Monica’s voice calls out as she and Hayes stumble toward us. “Tell her,” she demands, pushing my brother down to sit between me and the hot stranger.

“You are h-heartless,” he hiccups, resting his head on my shoulder before snapping it up and looking at the stranger. “Hayes,” he introduces with a slight growl in his voice that I know no one else would’ve picked up on.

“Where are your shoes?” Monica yells, pointing at both my and Hayes’s bare feet.

I giggle and wriggle my toes into the soft sand. Who wears shoes to the beach?

“At home,” Hayes mumbles, leaning his head back down on me. “You new?” he grunts toward Asher.

“Yeah.” He nods, not offering any more information.

“Surf?” he asks. According to Hayes, if you either surf or play football, you’re okay in his book until proven otherwise.

“Bazel,” he whines back.

“My drink’s empty,” I pout, shaking my empty cup in his face.

Hayes rolls his eyes but takes my cup to go refill it. Good boy.

“I need me one of them,” Monica sighs, sitting on my other side.

“You can have him,” I snort, rolling my eyes.

“I need to kiss someone so badly right now,” she groans, throwing her head back, nearly falling off the log.

“There’s Cameron.” I nod toward the jock who’s standing on the other side of the fire.

“Love you!” she yells before she disappears for the rest of the night, leaving me alone with Asher.

“Where are your shoes?” he laughs, nodding at my feet.

“Home. I mean, who comes to the beach wearing shoes?” I ask, pointing to his flip-flops.

“So when you leave, your feet are safe,” he chuckles, moving down the log a little closer to me.

“Not needed when you live on the beach.” I try to wink but fail and just blink awkwardly.

“You live in one of those?” He whistles, looking toward all the rich people’s houses.

“Oh no, I’m not telling you where I live,” I laugh as Hayes comes back holding three cups expertly in his hands.

“Thanks, man.” He nods, taking the cup. “What are we talking about?” he asks, raising an eyebrow at the new guy.

“Shoes,” I slur, taking a large gulp of the beer.

“Shoes, man. Who needs them?” Hayes chuckles. “Where’s the tall one gone?” he mumbles, noticing Monica is gone.

“Ha,” he snorts, chugging half his beer down, and we fall into an awkward silence. “Sooo,” Hayes draws out. “Running back, huh?” he asks, turning away from me to Asher.

I tune out as the two boys fall into football talk.

After I finish my beer Hayes rests his head on my shoulder again, mumbling about being sleepy. I sigh, knowing it’s time to go home.

Though, to be fair, I knew this was going to happen. Hayes can never handle his alcohol as well as I can, and he never hooks up at the bonfire.

“Come on then,” I mutter, pushing him off me, then standing up. I hold my hands out for him, and he grabs them to pull himself up.

“I love you,” he mumbles, wrapping his arm around my shoulder and kissing the top of my head.

“Yeah, yeah. Love you too,” I mutter, trying to keep him up.

“Need some help?” Asher asks, eyeing me holding up my brother.

“Nah. I got this,” I giggle and stumble.

“Done it before?” he asks, raising an eyebrow.

“Practically every weekend,” I laugh.

“See ya later, man!” Hayes calls out as if we actually have walked off.

As I drag my stupid, drunk, and heavy brother up the beach, my mind wanders back to the new hot stranger on the beach. There’s something about him that has me intrigued.