Survival of the Rose

After the death of her father, the king, Deanna finds herself in a dangerous situation. She is a bastard princess, and her stepmother, Queen Rosaline, and her stepbrother, Prince Lamont, will stop at nothing to see that she is removed from the court. Alone and without anyone to protect her, Deanna begins to fear for her life. But when suitors begin arriving to court Queen Rosaline, Deanna meets a handsome stranger from a faraway land who may offer the salvation she seeks... 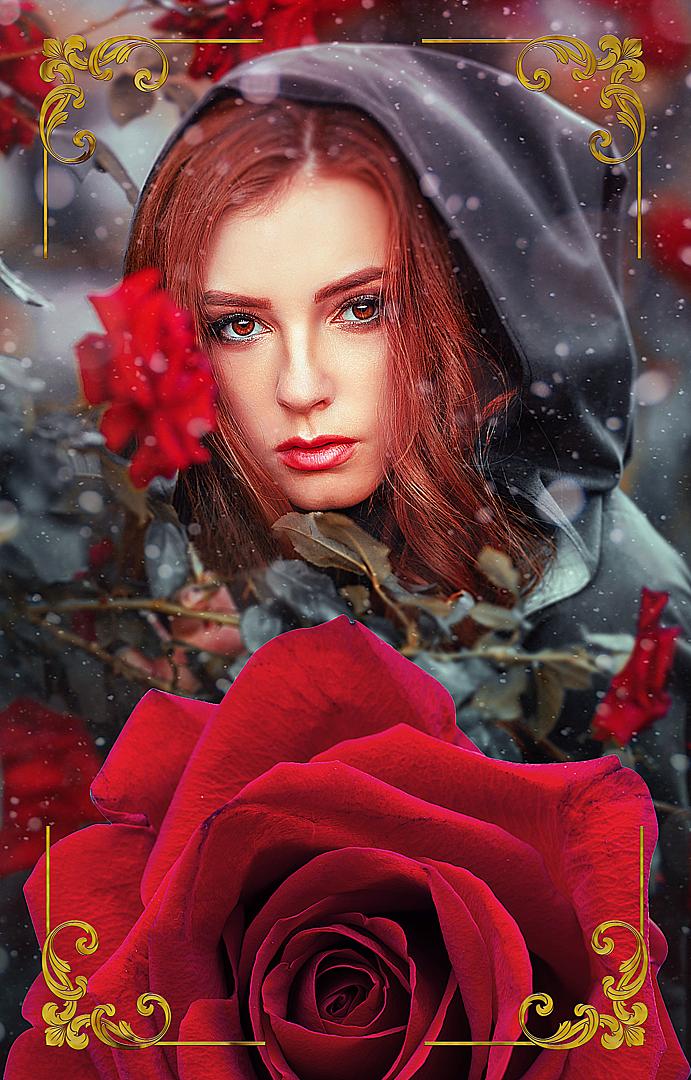 Survival of the Rose

After the death of her father, the king, Deanna finds herself in a dangerous situation. She is a bastard princess, and her stepmother, Queen Rosaline, and her stepbrother, Prince Lamont, will stop at nothing to see that she is removed from the court. Alone and without anyone to protect her, Deanna begins to fear for her life. But when suitors begin arriving to court Queen Rosaline, Deanna meets a handsome stranger from a faraway land who may offer the salvation she seeks...

Deanna winced as a thorn from a rose stem pierced her delicate skin.

A metallic taste graced her tongue as she brought her finger to her lips for comfort.

It was unlike her to make such a mistake, but swirling clouds and the sound of soft rolling thunder had diverted her attention.

There was no place in the world, she believed, more peaceful than the gardens of her dear castle grounds, but the darkening skies above told a different story.

She turned in alarm when she heard the clanging of a bell.

She was out of breath when she caught up with the princess, but she managed to speak.

“The king! Your father, the king!”

The blood drained from Deanna’s face.

Not waiting for another word, Deanna dropped her shears and hurried toward the castle.

She arrived at her father’s chambers.

She knocked softly, afraid of what she’d find inside.

Deanna stepped inside and curtsied twice in the direction of the large bed.

The room’s only light came from the dying fire.

“My lovely Deanna,” her father whispered through the bed’s drapery. He looked so small in his grand bed.

“How does it look like he fares, you stupid girl,” the voice that had bid her enter snapped. “He’s dying.”

Deanna turned to the woman sitting at his bedside. She wore a lavish red gown and jewels that glittered in the firelight around her neck.

“Hello, Queen Mother,” Deanna responded. The queen turned back toward her husband.

“Father, I brought you fresh flowers,” Deanna said, moving toward a vase.

She removed an old, wilted arrangement, replacing it with the freshly cut roses.

The queen let out a dainty sneeze and covered her nose with a handkerchief.

“Thank you, my heart.” The king smiled.

He held out his hand to her, and Deanna abandoned the flowers to approach him.

Her father’s fingers moved in hers, his grip barely a shadow of the strong hands that used to hold her above his head when Deanna was a child.

“You’ve always been more the flowers’ child than mine,” the king chuckled.

Deanna had to lean close to hear him speak. She’d never seen him so weak.

“I’m blessed to be a child of such a king as you, Father.” Deanna smiled, attempting to mask her concern.

The queen flashed her a disgusted look.

“My queen.” The king turned to her. “Could you give us a moment? I’d like to speak with Deanna alone.”

“I must see to the servants,” she responded, rising. “Someone must run this household.”

The door closed a little harder than necessary. Deanna stared at it for a moment.

Will she always hate me so?

“I’m sorry you’ve grown up so harshly,” the king said, calling back his daughter’s attention.

“No, Father,” Deanna answered, squeezing his hand. “I’ve had more than any bastard princess could hope to deserve.”

Her father frowned at the word bastard.

“You’re my daughter and heir as much as any of your sisters,” the king assured her.

He was indeed a generous king and father.

Deanna was, however, not the queen’s child, and she could therefore never be regarded as King Harold Harrell of Albarel’s legitimate daughter.

“I worry about you the most,” the king continued.

“I will not be around much longer—”

Even now, he had to stop speaking to take a breath of air, and Deanna took this opportunity to interrupt him.

“Father, you mustn’t say such things.” Even as she spoke, Deanna’s heart felt tight in her chest.

He’d been ill for weeks, and in the past few days, he’d taken a turn for the worse.

The castle doctors were at a loss to help their king.

“Hush, Deanna, and let me finish,” the king answered.

The king reached a hand up to cup her cheek. “I will not be around much longer.”

Looking into her father’s eyes, Deanna knew he was right. It felt like watching the wavering flame of a beeswax candle burning down to the end of its wick.

I’ve never seen him so weak before.

It breaks my heart for him to be in such a state.

But, by God, I fear what comes when it ends.

The king continued, “As you know, the queen will rule until your brother Lamont’s coronation.”

Prince Lamont detested her as much as the queen did, though Deanna never understood why. The rest of her half-siblings treated her like family.

Deanna had long ago given up on developing a warm relationship with the Queen Mother, but she still held out hope that Lamont would become more open-hearted as he matured.

The prince was next in line for the throne, but he couldn’t rule until he turned twenty-five, meaning the queen would be the sole ruler for five years if King Harrell were to die.

Deanna held back tears as her father spoke.

Deanna remained silent. Her father rarely mentioned her mother, and when he did, she held onto every syllable.

“I fear she’ll take her grudge out on you when I’m gone,” he finished, his eyes closing as he took a break from the effort of speaking.

Deanna knew the story from the servants, the villagers, everyone.

Deanna’s mother had been one of Queen Rosaline’s ladies-in-waiting.

She and the king had fallen in love and started an affair.

The queen hadn’t cared about the infidelity, but their love for one another had been unacceptable.

Love was far more powerful than a mere affair.

The queen was intelligent, and she knew that with love a woman held great influence.

She’d tried to banish Deanna’s mother from court, but the king wouldn’t allow it.

It was too late.

She was with child.

When Deanna’s mother had died during childbirth, instead of sending the infant to her relatives as was customary, the king had claimed the child and named her Deanna.

In order to protect the line of succession, the queen wanted to ensure her stepdaughter be sent to a nunnery when she was old enough.

But Deanna’s father disagreed, instead naming his daughter an heir like her siblings.

Deanna found herself in an unusual position, for, although an heir to the king and an equal to her siblings in his eyes, she was still an illegitimate child according to traditional law.

The kingdom knew Deanna as the “bastard princess,” a title she came to know early in life.

Growing up, Deanna had been an unusual child.

She often accompanied the king to the village surrounding the castle.

The villagers fell in love with her beauty and generosity. Or so they told her at every chance they had.

Deanna spent as much time as she was allowed learning from the healers about the remedies they used to help patients.

She wanted to know the ingredients of each salve and where she could find the plants from which they were made.

She persuaded the gardeners to plant these useful herbs on the castle grounds, where she tended and harvested them to help the sick.

Now, she still stole away to the village sometimes to assist at the hospital.

Deanna focused her attention back on her father, who had opened his eyes once more and was attempting to continue their conversation.

“I’ve sent out letters to neighboring kingdoms in search of a husband for you,” the king told her, “to take you away from here, so that you may live your life safely and happily.”

“But, Father, you know no noble person will marry me,” Deanna replied.

He never understands that the world doesn’t see me the way he does.

I’m not a desirable match for anyone.

“But Albarel is my home,” she answered.

Tears started to slide down her cheeks as Deanna contemplated the kingdom without her father.

“Your home may soon be a dangerous place for you. You’re a product of love, not duty. As such, you’re a threat to the queen, whether you understand it or not…

“And though she’s my wife,” he continued, “she will not take pity on a child from another’s womb. Lamont, I have reason to believe, will be worse.

“He’s young and reckless, and he doesn’t show the same restraint as his mother. Heed my warning, child. You must be careful.”

“I will, Father,” Deanna promised. She hugged him tightly, feeling his bones through his nightshirt.

“I love you,” she whispered, attempting to steady her emotions.

“I know, my heart,” her father answered.

They sat in silence as the king’s breathing became more labored with every breath.

Deanna feared this would be the last conversation she’d have with her father.

She knew she’d communicated everything she wanted him to know, and yet she wished she had more to say.

As if the urgency of one last message might delay his passing another day.

Not long after, the king’s doctors shooed the princess away from the room.

The queen had been waiting outside, along with Lamont. They were lurking in the hallway just outside the door to the king’s bedchamber.

The queen pretended to be inspecting damage to one of the tapestries that hung there, but Lamont made direct eye contact with Deanna as she exited the room.

Why does his presence always give me the chills?

As Deanna brushed past her stepmother, wiping tears from her eyes, the queen spoke softly.

“Things are going to change, Deanna. I hope you’re ready.”

Far to the north, in the Kingdom of Summoner, a messenger bowed before handing a rolled parchment to a thin, elderly woman with snowy-white hair.

“Thank you, Peadar,” Lady Bianca said, taking the scroll and breaking the wax seal of Albarel that held it closed.

It was known far and wide that King Harold Harrel was in ill health, and Bianca sighed at the thought of the death of the kind and gentle ruler.

She unfurled the letter. Her eyes skimmed the page.

…so you must understand the predicament in which I find myself. I call on you in my time of need. Your son could find himself no sweeter wife if he were to search amongst the angels in the heavens themselves…

The door to the throne room opened, and the woman stopped reading.

“Hello, Aunt. How fare thee?” her nephew greeted her casually, running a hand through his blond hair.

“Nothing that concerns you.”

He laughed, but his brow furrowed slightly at her evasiveness.

She called back her servant, who entered promptly and approached the throne.

“Burn this,” Lady Bianca said to him, handing back the message.

She pitied the young woman’s plight, but the well-being of her family came first and foremost.

The bastard princess would have to face her situation alone.