The Arrangement: The Finale

Your favorite bad boy billionaire is back! Find out what’s in store for Xavier and Angela’s iconic relationship in The Arrangement series finale. 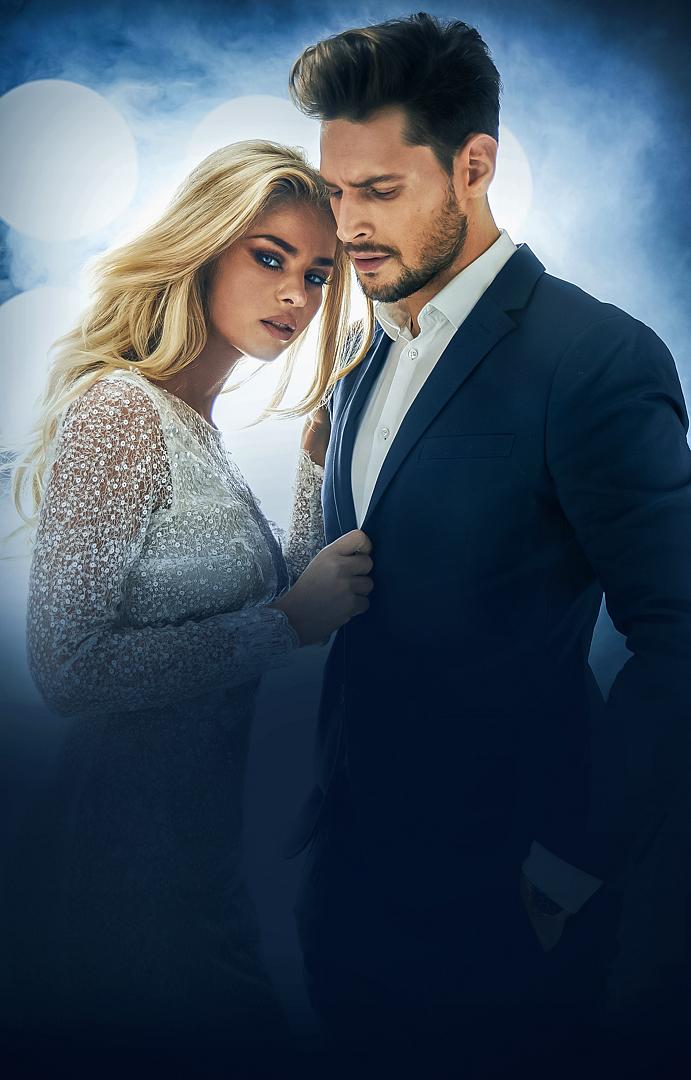 The Arrangement: The Finale

Your favorite bad boy billionaire is back! Find out what’s in store for Xavier and Angela’s iconic relationship in The Arrangement series finale.

I glanced back at the paper, just to double check. But there it was.

Play it cool. Keep up your poker face.

I passed the paper across the table to Al and watched his face transform with disbelief. My partner couldn’t tell if we’d been dealt a royal flush or a 7-2 offsuit, the worst hand of all.

Who was I kidding? It was hard to play it cool. The O’Malleys wanted to buy X-Label for ten million dollars.

But I didn’t want to hand over X-Label, even for a sum like that. And Al’s lack of a poker face implied the same thing. I cleared my throat.

“Sam, Sally…this is an extremely generous offer. And as you can tell, Al and I are shocked. This is completely out of the blue.”

“It seems like the gods are smiling upon you, Xavier Knight. Doesn’t it?” Sally asked, smiling into her whiskey glass.

Something about their smug friendliness put me on edge. It was like they were enjoying watching Al and me squirm.

But we clearly had the upper hand here. We had to get it together.

I kicked Al under the table, and he tore his gaze from the note paper.

“We’re honored,” Al added. “But you have to understand that for me, X-Label is about so much more than money. This has been a lifelong dream of mine, and it’s starting to come true.”

“I feel the same way,” I continued. “As much as we’re flattered by this offer, we can’t accept it. We want to see this through ourselves.”

The table’s warm vibe turned chilly, like whiskey on the rocks.

I noticed something pass silently across the table between Sam and Sally, and it suddenly felt like Al and I were intruding on something private.

“Well, we appreciate you going through all the trouble to meet with us,” Sam said, thinly veiling his disappointment with passive aggression.

“It was no trouble at all,” I replied brightly, trying to lighten the mood. “I hope you two will have some time to explore New York before you go back across the Atlantic?”

“Oh, certainly not,” Sam answered. “We never stay in this place longer than we need to.”

So much for that. These two are as light as mahogany and black leather.

“No. I find it so dirty…and full of disappointment,” Sally replied, just loud enough to be heard.

She was peering over Al’s head, eyeing the exit. Finally, we were all on the same page.

I pulled a crisp hundred from my money clip, placing it on the table.

“For the round. I wish we could stick around for another, but I have a family dinner waiting for me at home.”

“Me, too,” Al added, and I wasn’t about to point out that he was single.

“Give our best to your lovely wife,” Sally said, catching my eye.

“Maybe our paths will cross again one day,” Al added.

“Yes,” Sam replied, looking directly at me. “I have a feeling that they will.”

As I headed out of the bar, I realized I’d never mentioned Angela to the O’Malleys.

We’re constantly in the news. Of course Sally would have seen pictures of Angela and me. Nothing weird about that!

“Sheesh!” Al exclaimed as soon as we were out of the bar and on the sidewalk in the Manhattan dusk. “Those guys give me the creeps.”

“Oh, come on. It’s just business,” I replied, willing myself to believe it.

But honestly, as I gave Al a clap on the back to say goodbye, I was trying to forget about the icy look in Sam’s eye.

“You do what!?” I gasped as I stared at the towering rock wall before me.

The multicolored plastic holds on the rock wall looked like fun…until I realized they were the only thing between me and imminent death!

“You climb. Without a rope,” my new friend Jenny explained for the third time. We were on a mom date at Jenny’s climbing gym.

I looked on as Jenny approached the wall and reached into the small chalk bag at her waist. Then she clapped her hands and a cloud of white dust floated around her.

I quickly checked my phone even though I knew there would be no new messages.

That was becoming my mantra.

I’d been hesitant to leave Leah and Ace at home with Dad, but he had insisted that I needed some time to myself.

The fact that it was true didn’t make me any less anxious. He’d gone on to insist that he’d raised three kids practically on his own…and I couldn’t argue with that.

But I could leave my phone at the highest volume, just in case. I tucked it away once again.

Jenny winked at me over her shoulder before starting to climb.

She moved gracefully, shifting her weight from one yellow foothold to another.

My mouth was hanging open. Every move was deliberate. And the craziest part was that she made it look so easy.

When she got close to the top of the wall, I became nervous. I wasn’t at all prepared for my new friend to leap into the air. I couldn’t help it—I shrieked.

But Jenny grabbed a large yellow hold with both of her hands, her slender body swinging left and right. I hadn’t noticed it before, but it was the last step in the route.

With that, she let go of the wall and plummeted downward. I yelped in alarm—for the second time—and rushed over to meet her.

But she landed softly in a low crouch on the cushy blue mat. And she turned to me with a big smile.

“Wow,” I gushed, catching my breath. “You are officially the coolest mom I know.”

She laughed, a real belly laugh. “That means a lot, coming from you!”

“Are you kidding?! I’m about to pass out from the adrenaline, and I haven’t even touched the wall yet!”

I stuck out my hand and helped her up.

“The adrenaline is one of the best parts,” she replied. “And I love that I can surprise myself. And I think you’ll love it, too.”

It had been hard and scary. But it felt amazing.

I couldn’t remember the last time I felt genuine excitement for something that wasn’t my family or work.

Jenny and I sat down with oat milk cappuccinos from the gym’s cafe and watched the other climbers.

“Thank you for inviting me, Jenny,” I said sincerely. “I never would have done this alone, but I really enjoyed myself.”

“Anytime, girl! I have to admit, it’s fun to show off to someone new.”

I laughed, and realized my abs were sore.

“Trust me, I’m impressed. But I’m also curious…how did you get started with this?”

“Another mom showed me, of course!” Jenny replied. “And I just…fell in love with it.”

She smiled peacefully as I looked on. I want that feeling, too.

“It feels so good to do something just for me. I get to the gym, take off my heels, my jewelry, even my wedding ring!”

I looked down at my own hands. I’d already put my ring back on. I felt naked without it.

But it was dangerous to wear them while climbing, so for an hour I kept it in the small pocket in my legging waistband, checking every few minutes to make sure it was still there.

Her words reminded me of a feeling that used to be so familiar. Running had always grounded me. It was my meditation.

But my sneakers were stuffed in the back of the walk-in closet. I hadn’t touched them in months.

“How do you find the time?” I asked, sincerely wondering. “I don’t even work right now and between child care and school searching, I–”

“I get it, sister. But trust me, you’ll never find time. You have to make it. And when you do, your whole family will thank you.”

“I really needed to hear that,” I admitted.

“We all do, from time to time. So tell me, how’s the school search for the twins going?”

“Well, so far, when I think a school looks perfect on paper, I find that it’s completely wrong in person.”

“Oh, I remember that!” Jenny replied with a laugh. “If there’s one thing I wish I knew back then, it would be to ignore all the reputation bullshit. Which is easier said than done, I know.”

“I just get so swept up in it,” I admitted. “The idea that a school could open every door for my children…it’s hard to resist.”

“I completely get it. But there are so many amazing schools out there. And they’re not all museums like St. Barnaby’s.”

“They did not! That’s hilarious.”

“What you need is a place that will encourage their curiosity and embrace their creativity… Have you checked out Endless Horizons?”

“It’s in the Montessori system,” she went on. “They care about experiential learning and kids are encouraged to direct their own curriculum.”

I frowned. I’d always thought of alternative schools as too hippy for my taste…but on the other hand, prep schools were way too stuffy.

Why shouldn’t I give it a chance?

After a few more minutes of chatting about TV, the weather, and other deliciously unimportant topics, I said goodbye to my new friend.

On the drive home, I left the windows down, feeling the wonderful post-workout exhaustion that I hadn’t realized I missed.

My time with Jenny had cleared my mind and given me renewed hope for Leah and Ace’s school search.

I promised myself I would stop trying to make my kids fit into a school, and find a school that fit them.

I smiled as I turned onto our street, thinking about my twins.

They were bursting with energy and creative ideas. And they shouldn’t have to suppress that. I just needed to find an environment where they could—

“STOP!” I shrieked, and my Zen disappeared as I slammed on the brakes.

And the toy car with my children inside did stop…in the middle of the street. Ace and Leah turned to me with disappointed expressions.

“What are you—? Playing in the street?!” I sputtered as I got out of the car and left it idling. “Where is Grandpa?!” I demanded.

I turned to the sprawling lawn, and sure enough, Dad was asleep on a lounger…and covered in makeup.