After the corpse of a six-year-old girl is found on an NYC playground, homicide detective Lauren Ryder vows to catch her killer before he can claim the innocence of a second child...even if that means losing her mind, or her life, in the process. 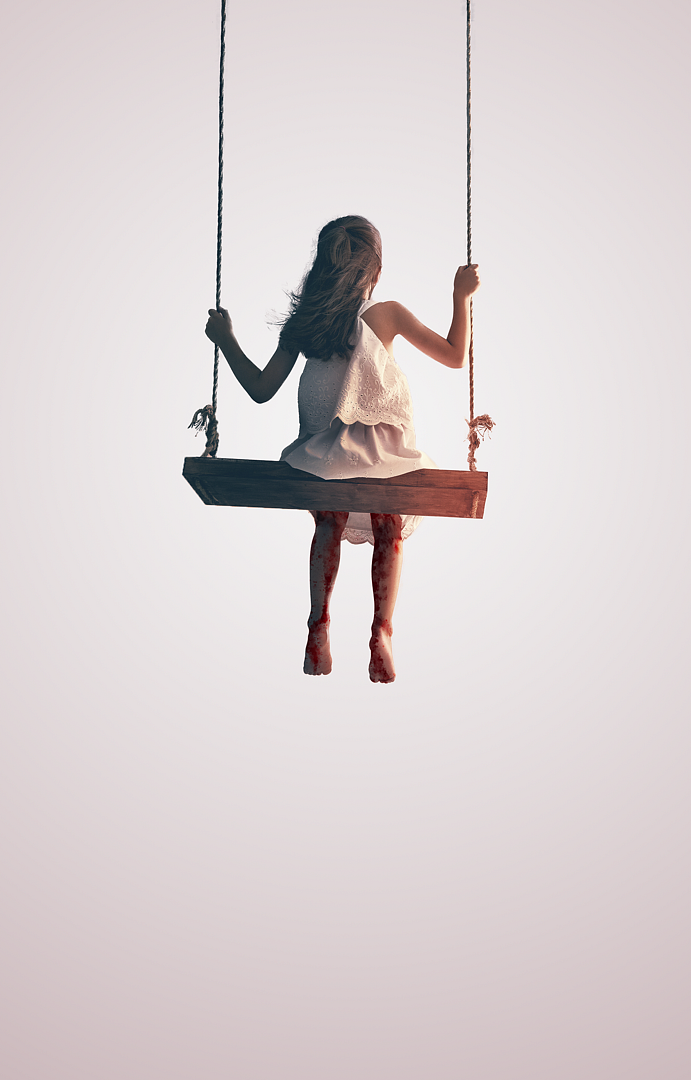 After the corpse of a six-year-old girl is found on an NYC playground, homicide detective Lauren Ryder vows to catch her killer before he can claim the innocence of a second child...even if that means losing her mind, or her life, in the process.

After just one blaring tone from her alarm clock, Lauren Ryder’s hand shot out from under the covers and turned it off. It was 6 a.m. on the dot, and her snooze button hadn’t gotten any action in years.

Today was no exception.

She slipped into the workout clothes that waited on the bench at the foot of her bed. Then it was straight to the bathroom to brush her teeth and comb her blonde hair.

In the kitchen, the coffee was already trickling into the pot, set on a timer the night before.

Lauren poured herself a cup and added a packet of stevia before pulling out her phone and opening up her to-do list.

The day ahead was jam-packed.

“Check.” She smiled to herself. She liked adding obvious tasks to the list just for the satisfaction of ticking them off.

She didn’t have time to scan the tasks for the second half of the day. She had to get moving or her workout would be cut short.

Lauren poured the rest of her coffee into a to-go mug and moved toward the front door of her tiny apartment.

She passed a wall covered in framed photos of herself with friends and family.

The most frequent faces belonged to her father, her brother Liam, and Lauren’s favorite person in the world: her “almost six years old!” niece Emma.

Emma’s birthday was tomorrow, and Lauren couldn’t wait to watch her blow out her candles.

Standing in the threshold now, Lauren made sure that she had everything she needed for the day ahead:

And the two other things she would never leave the house without:

She disappeared into the hall and the door clicked shut behind her.

At age twenty-seven, Lauren had already been an NYPD homicide detective for three years.

She was the youngest person to be promoted to detective in the history of her precinct.

What she lacked in years, she made up for in self-discipline. She stayed later and worked harder than any of the others in her cohort.

And that was just how she liked it.

Detective Steven Phillips, partner to Lauren for the last year and a half, watched as Lauren beat the living hell out of a punching bag hanging in the police station gym.

“Whose poor ass are you picturing today?” the trainer, Dan, asked her.

Dan normally worked with the field cops, but Lauren still wanted to stay in fighting shape, even after becoming a detective.

Steve admired that, though sometimes he teased that she made the rest of them look bad.

“I’m picturing me, yesterday,” Lauren said through grunts. “If I’m stronger than her, I’m doing something right.”

Lauren’s time in the gym meant everything to her. It was her way of burning off the stress of a caseload—of settling her heart rate after mainlining caffeine day after day.

Phillips knew that other people in the precinct had different addictions to help cope with the pressures of the job. Alcohol, cigarettes, pills, you name it. But Lauren would barely have one drink before cutting herself off.

As she finished her session, Lauren gave Phillips a nod. “You wanna wait for me in the front?”

A few moments later, as Lauren jogged down the stairs to meet with him, her phone rang and she plucked it from her gym bag, continuing to descend.

Glancing at the screen, she looked up and mouthed, “Liam.”

Lauren rolled her eyes and answered: “I told you to stop calling me on workdays. It’s distracting.”

Walking beside her from the police gym to their shared office, Phillips watched with mild interest as Lauren exchanged good-natured barbs with her brother.

“I’ll be there,” Lauren said into the phone. After a pause, she repeated, “I said I’ll be there! Can’t wait. Have a nice day.”

She hung up and gave Phillips a grimace.

“Where does he want you to be? Court?” Phillips asked. Liam was one of the top prosecuting attorneys in the tristate area.

Phillips was a close colleague from back when they were both uniformed officers. He was as much family as Liam. He had even met Emma.

“So—finally ready to get to work?” he asked with a grin as she took a seat at her desk.

Lauren met Phillips’s eyes, eager to hear what he would say.

“Bollinger got his conviction,” Phillips began.

“And?” Lauren’s heart started to pound in anticipation.

When they caught him he showed no remorse—smiled in his goddamn mugshot.

“Are you surprised? That’s what you get when your weapon is your daddy’s Porsche.”

“That Hernandez kid got fifteen years for the same thing,” Lauren said, her fists clenching.

Lauren took a deep breath and tried to shake off the news. Once she caught the guy, her part of the equation was over. There was nothing she could do.

But if it were up to me, he’d be celebrating his thirty-second birthday in prison.

She sighed and carried on. “Still no sign of Kagan, huh?”

Robert Kagan. Age thirty-three. His wife was found strangled to death with his belt.

“We should get eyes on Empire City Casino,” Lauren said. “His mistress said nothing could keep him away from there. Never underestimate the power of a gambling addiction.”

“No way he would risk going to one of his usual spots, right?”

“This is the same genius who left a note that said ‘Oops, sorry’ next to his wife’s corpse.”

Philips laughed, “I still want to get that framed.”

“It’s a piece of evidence, Phillips,” Lauren said. She didn’t even like to joke about breaking protocol.

“Alright, alright. I’ll head down to Empire City while you meet with Hale—if you think you can handle him without me.” He smirked at her.

“Hey, don’t let the door hit you on your way out,” Lauren called after Phillips as he sauntered out of her office. “Or do. Whatever.”

Moments after Phillips left, Lauren made her way to Hale’s door.

“Come in, Ryder,” a voice called out after Lauren delivered her signature double knock on the door.

She opened it to find Lieutenant Oliver Hale leaning back in his chair. “I heard about Bollinger,” he said, motioning for her to sit opposite him. “Entitled son of a bitch.”

“Working on the Kagan case. I’m gonna stay in and get through my growing stack of files.”

“That’s just fine,” he replied, running a hand through his salt-and-pepper hair. But he clearly wasn’t paying attention to her words. His mind was elsewhere.

He shook his head. “A six-year-old girl was taken from her bed last night. Isabelle Mackintosh. No sign of forced entry. The parents just called it in.”

“And you’re sure they have nothing to do with it?”

He glared at her. “When they can get up off the floor, I’ll be sure to ask them.”

Not a great idea to coddle suspects just because they act upset.

Keeping that thought to herself, she said, “Do you want me to—”

“Stay in your lane, Ryder,” he said. “As of now, we have a missing child. We’re obviously going to explore all the avenues. Let’s just hope this case never crosses your desk.”

“Get back to work, please.”

She started to leave but then turned back toward her lieutenant. “I heard you went to visit…” her voice drifted off.

Hale’s face softened as he nodded.

Hale shifted in his seat. “No change. But it was good to see him. You should, too. When you’re up for it—”

“Yeah. Sure. Thanks,” she said, avoiding eye contact as she excused herself from the room.

Lauren returned to her office and started on her paperwork. But as she plowed away, her mind kept flashing to an image of her niece, laughing on the swing in Liam’s backyard.

She couldn’t even begin to imagine the pain that she would feel if Emma vanished in the middle of the night.

The idea alone was too much to bear.

Lauren regulated her breathing and focused on the file in front of her.

When it all came down to it, Lauren worked as hard as she did to make the world a safer place for Emma. Medals and accolades were nice, but that was the only thing that really mattered.

At lunchtime, Lauren stared blankly at shelves in a toy store, filled with all the latest gadgets in flashy packaging.

Pretend you’re six. Come on. What would you want?

But even when Lauren was six, toys had never interested her. She always wanted a puzzle—something she could solve.

We can work on it together.

Lauren smiled at the thought as she took it to the cashier.

Just then, her phone buzzed. And then buzzed twice more.

Lauren beamed, threw a $20 bill down on the counter, and rushed out of the shop.

As soon as she entered the station, Lauren was ambushed by the smiling face of Naomi Davis. Davis was a twenty-one-year-old, eager, newly minted cop—with her hazel eyes set on homicide.

Lauren had unofficially taken Davis under her wing.

“Congratulations, Detective!” the brunette officer cried out. “He confessed as soon as Phillips got him into the interrogation room. Isn’t that amazing?”

“Aw, I missed the fun?” Lauren asked, genuinely disappointed to have missed out on questioning the suspect. “Guess there’s always a next time.”

Moments later, Hale gave her a pat on the back for a job well done, but praise didn't matter to Lauren.

The only thing that she cared about—the only reason she drifted off to sleep so easily that night—was that justice had been served.

Lauren Ryder’s hand shot out from under the covers and slammed onto her cell phone. She was confused for a moment. Then she sat up.

This can’t be good.

A body found at Dewitt Clinton Playground. A kid.

A chill ran down her spine. Lauren was usually unfazed by such reports, but something about this one didn’t feel right. It put her on edge.

Lauren didn’t know why, but she couldn’t shake the feeling that this was only the beginning.