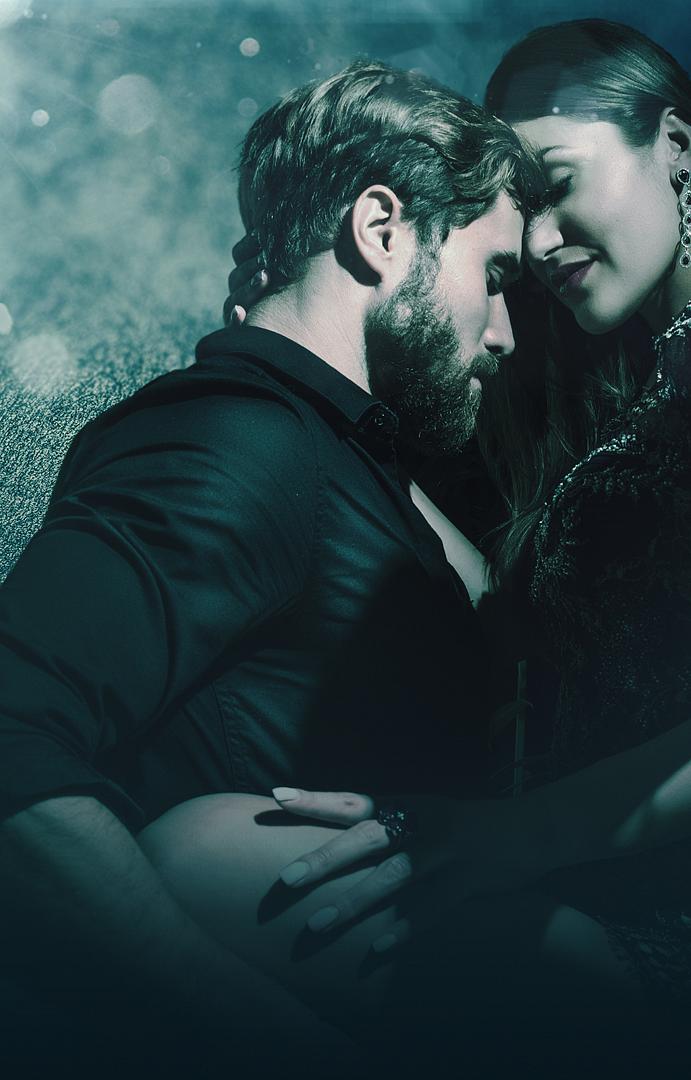 I pinched at my cheeks, smoothing my hair behind my ears. The lift doors parted with a soft chime just as I swiveled on my feet, the familiar sight of his penthouse warming my face.

Daniel tore my clothes off as soon as I crossed the front door of his apartment, my dress landing in a mess around my feet. He stared at me hungrily, pouncing like a starved predator.

Smoothing heated bites along the curve of my neck, he lapped over the addictive sting with his tongue, his arms wrapped tightly around my waist.

I impatiently worked through the buttons of his shirt, throwing it to the side blindly. He hoisted me up, my legs wrapping around his waist as he turned through the corridors, dropping me onto a mattress.

He locked my hands above my head, his every touch lighting my core ablaze. Placing open-mouthed kisses down my body, he paused at my stomach, blowing cool air over my heated skin.

His eyes clashed with mine before his head disappeared between my legs, caressing the inside of my thighs with the tip of his nose.

“Rose.” My name rolled off his tongue like poetry, his light accent making warmth pool in my core.

It was a warning because I should have prepared for what he did next. I let out a moan, my head lolling back as he skillfully worked at my nub, tracing sinfully slow circles around it.

“Daniel, please.” I writhed under his torture, my orgasm brimming on the edge of explosion. My head turned to the side, my eyes pressed shut beneath the pressure building in my core.

“Look at me.” He tilted my chin up with a finger, drawing lazy circles across my bottom lip. Dipping his thumb into my mouth, he watched as I sucked on his digit, a low growl escaping his lips.

Suddenly he clamped down onto my clit, his fingers working in and out of me at a steady pace.

I laced my finger through his jet black hair, the midnight shade glossy beneath the moonlight shining through the tall windows.

My hips buckled under his tongue, my knees shaking as I screamed out in pleasure.

He held my hips down firmly, continuing his assault, rapidly sending me over the edge again and again. His fingers teased at my nipples, lightly pinching the sensitive flesh.

“Oh—” I came down from the constant waves of pleasure, his eyes ablaze with lust.

The unmistakable sound of a zip sounded; I watched in awe as he tore the condom wrapper open with his teeth, sheathing his length.

Pushing my knees up, he spread me open, nudging at my entrance. My lips dropped open at his size in a gasp, earning a low chuckle from him. Thick enough for a sweet burn, with a sexy curve.

He nipped my ear lobe slightly before whispering, “I can’t do slow today, love.”

I shivered at his endearment, my eyes clashing against his. “That’s fine by me.”

Before I’d had a chance to breathe, he plunged into me, my fingers clawing into his naked back. I whimpered slightly, his lips placing small kisses over my cheek.

I rocked my hips against him, the curve of his cock hitting at a certain spot. Taking my eagerness as an approval, he began to thrust in and out, his pace building up.

He pushed my knees back further, allowing for a deeper angle. I was a mess, his thumb working at my clit again.

“You feel amazing.” His lips crashed into mine in a heated storm, the minty taste of him bordering addictive.

He rolled my nipples between his fingers, pinching and drawing moans out of me. Grabbing one in his mouth, he lightly sucked on the sensitive flesh, flicking the bud with his tongue.

His thrusts became urgent as I felt myself begin to unravel again, my waves building. He bit lightly into my shoulder, a series of low groans resounding as he came violently, sending me over the edge.

He dropped down next to me, pulling me against his chest. I cushioned myself into him, my tired limbs begging for sleep.

“You really are something, aren’t you?” He smoothed slow circles into my shoulder.

If we were a couple, this would have been called cute. Or sweet. Perhaps passionate.

He was my boss, and I was his employee.

Not that he knew of it.

I’m Rose Millar, and this is a take on how I ended up in my boss’s bed.

But in the grand scheme of things, this fact is minuscule—and what really matters is that my manuscript ends up on his desk.

The manuscript that features an erotica.

The early morning sunlight bit at my tired eyelids, spreading a golden glow over the messy room. Clothes were strewn around in a blend of colors, a groan leaving me as I spotted my torn dress.

The bed sat cold next to me, my face heating under the idea of an awkward conversation.

I raced through the events of the previous night, my mind closing in on one detail. Daniel.

That’s a start. At least I know his name.

I rolled out of the duvet, hissing at the pain in between my legs. The sound of running water met my ears, my shoulders relaxing as I blew out a breath of relief.

I searched frantically to find something to cover myself with, my eyes landing on a large, plain black T-shirt.

Hesitating for a second, I threw the fabric over my naked skin, eyeing the bathroom wearily. Guilt settled in my gut as I paced back and forth with anxiety.

I can’t just take his T-shirt.

Taking a quick mental note never to have a one-night-stand again, I began the treasure hunt of finding my things. Finding a shoe at the front door, and another under the bed, I threw them onto my aching feet.

Panic rushed through my veins as the noise of the streaming water hushed. Blowing out a slow breath, I spotted a notepad by the bedside table, a pen resting conveniently on top.

I sat down to write him a note, to tell him that I’d return his T-shirt, only to find a message already scrawled over the page in neat handwriting.

Have breakfast with me.

My breath hitched, my cheeks blazing in a furious shade of red as I remembered the sinful things he had whispered into my ear while slamming into me.

Silently cursing at myself for not knowing what to do, I did the only thing I could think of.

Leaving the notepad, I ran out of the room, pacing toward the front door just as the bathroom door clicked open.

Not daring to look back, I shut the door behind me, clambering through the house and down the stairs.

The warm water streamed down my bare skin, caressing my aching limbs. My roaming fingers found my core, my thoughts escaping to last night as I sighed out in relief.

I’d never had sex like that before; rough and primal, hot skin against skin.

Quickly toweling off, I wiped the foggy mirror clean of the steam, my skin glowing under a new luster. My stomach rumbled loudly, begging for some breakfast.

Grabbing a mug of coffee, I limped into the living room, silently cursing the man from the night before all the way.

I nestled into the sofa, prying my laptop open to my manuscript. A scene that I had been waiting to write lit up the screen - I’d been saving it for last. Something steamy and sensual.

My thoughts escaped to the night before, to his heady scent and dark gaze.

I dug my fingers into a cushion, remembering the way my orgasms had shaken through me and how his fingers had felt caressing my skin.

With the thoughts running through my mind, I began to type, painting the night with my prose.

There was no question - it was amazing sex. Guilt wrenched through me as I imagined his shock at an empty bed.

And his missing T-shirt.

I felt heat crawl over my skin, warmth pooling in my core with every word. Jolting up from the sudden ring, I cleared my throat, answering my phone.

“Hi, Rosalie, how are you doing?” I held back a groan at her overly chirpy voice, easily recognizing the malice in her tone.

No matter how many times I’d asked the manager to call me Rose, she’d stuck to Rosalie like super glue.

“Okay amazing, so you’ll be able to come into the office today.” She said it like a statement, cutting my question in half.

“I know you normally come in once a week, but the new boss wants to meet each employee personally.”

I struggled to understand her: the sentences shot out at a hundred miles per second.

She laughed coldly, “He’s far from nice—he’s making staff cuts on the first day, so do yourself a favor and bring your British ass here.”

I ignored her remark, my face paling, “He’s firing people?”