Tied to the Moon

Alistrine and Orion couldn’t be more different if they tried. Orion lives the luxurious life of an Alpha, never needing for anything, while Alistrine struggles to survive in a world that deems her unworthy of life. It isn’t until fate brings them together, that they realize they’re both destined for something much greater than themselves. Will passion win or will darkness envelop them forever? 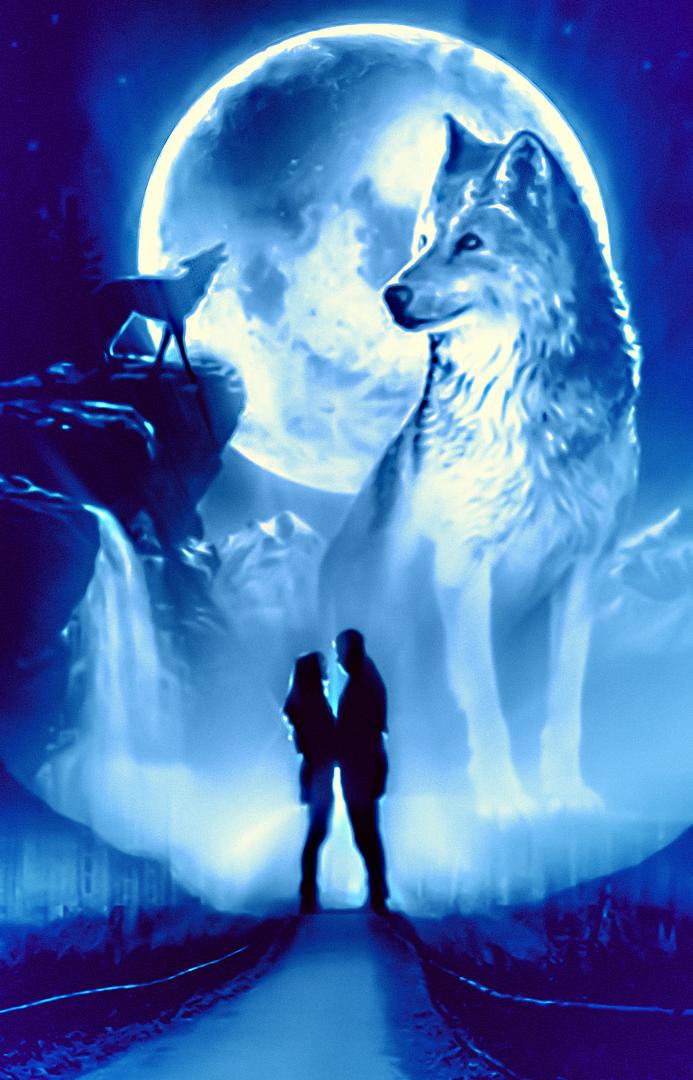 Tied to the Moon

Alistrine and Orion couldn’t be more different if they tried. Orion lives the luxurious life of an Alpha, never needing for anything, while Alistrine struggles to survive in a world that deems her unworthy of life. It isn’t until fate brings them together, that they realize they’re both destined for something much greater than themselves. Will passion win or will darkness envelop them forever?

1: For the Love of All Things

I crouched low to the ground, the wisps of grass tickling the underside of my neck and underbelly. I was in wolf form, my ears flat against my head and my tail postured parallel to the ground; hunting.

The scent of my target wafted into my nose, alerting my senses as I advanced. It was an injured doe, abandoned by her herd because of her disabilities.

My human side ached for her, but my primal side urged me to feed my companions.

It was known to most that rogues travelled alone, they were, after all, branded the lone wolf. But I'd acquired some followers to accompany me, their wolves willing to have me as their Alpha if it meant they could be protected.

The wind picked up, changing direction and blowing westward, towards the setting sun. The forest had a golden glow to it, the leaves of the autumn decorating the floor with its art.

I twitched, shaking the distracting thoughts from my mind and instead watching the doe as she struggled to stand, small grunts of effort coming from her mouth. I had to act now, so in one swift move, I lept, charging at her and sinking my teeth into the soft flesh of her hind legs.

She sprung up with adrenaline as metallic tasting liquid filled my mouth, bucking her legs in an attempt to shake me off. Her efforts were futile though, as I latched on harder, shaking my head back and forth; trying to inflict as much damage as I could.

I pulled back my head roughly, dislocating her hip and causing her to collapse onto the grass. My wolf thumped her tail onto the grass in pride, clamping her teeth into the doe's neck to silence her pleas.

The darkness provided a blanket for my actions, and I followed the moonlight with my eyes, amused at the fact the sliver of light danced with the grass as if it were an old friend.

The wind slowed down as I dragged the doe in the direction of the camp as if to congratulate me for my kill; sparing me it's cold.

Still, though, my wolf and I were grateful for the now calm weather, my body was still tired from running here and the doe was stronger than expected. Grunting with effort, I began to pick up the scent of my companions, their familiar aroma driving me on.

My efforts were rewarded as they came into view, the youngest of them spotting me immediately.

The young child sprung up from his spot on the grass, running over to me and wrapping his arms around my front legs. Our ancestors had grown to be larger than the average wolf, towering the same height as the average man when on all fours.

He ran his hand through the dark fur on my front legs, the brown colour fading as it got closer to my paws. My wolf purred, appreciating the action, and I nudged the boy with my nose as the others came into view.

The eldest, one of my closest friends, stepped forward to greet me the old way; cheek to cheek, taking my scent in as we've always done. She glanced behind me to the doe, her eyes shining with relief that we'd have something to eat.

The young boy let go of me, wanting to get a closer look at the doe, but its legs were mauled and it's neck bloodied and bruised and I knew he'd get upset at the sight.

I growled at him, my head obstructing his view as I nudged him back, away from the doe. His eyebrows knitted together in a frown as he allowed me to push him back, still craning his neck to try and see.

"Marcos, do as the Alpha tells you to," the elder lady, Keiko, told him.

Keiko held Japanese lineage, with her slightly tanned skin and straight black hair, similar to her wolf's fur. She'd been on the run from a previous Alpha until I found her one day.

Marcos reluctantly turned away, and I sent a thankful look to Keiko who smiled and ushered me away to shift back. I picked up my clothes from her, clamping them in my mouth and ducking behind a cluster of bushes and trees.

My bones cracked and changed, my body shedding fur for skin, my snout for a nose and my paws for hands and feet. Soon, the dull pain of the shift simmered down and I was left bare on the grass, quickly slipping on the clothes that Keiko gave me.

The sweet smell of deer wafted into my nose and I grinned, knowing Keiko had started to prepare the one I'd hunted. Our wolves had adapted our bodies to handle any type of raw meat, but Marcos was young and wouldn't like the taste.

I walked back towards the camp, images of me eating the deer causing a grin to erupt onto my face. Over the years I'd grown accustomed to eating deer, as sometimes it would be the only thing we could hunt.

"Alastrine," Marcos shouted, waving me over with his hand.

I smiled at the six-year-old as he ran towards me, his dark skin shining with happiness in the moonlight. As a baby, Marcos was abandoned by his father, who was a rogue. I'd found him shortly after I'd been with Keiko, and we both fell in love with him instantly.

"Keiko says we have to wait for Alistair to get back from his hunt," Marcos whined, giving me his best sad eyes.

I laughed, picking him up and wrapping my arms around his small body, he giggled and chatted on as we walked towards the crackling fire, our stomachs rumbling; all set to enjoy the feast before us.

Marcos slid down my legs, tottering over to Keiko and sitting down beside her as she finished up cooking the deer. Keiko mumbled something about 'not getting too close', and poked the deer with a stray stick.

Marcos hummed quietly, watching me with his big brown eyes as I gathered up sticks and twigs for the nightly fire. Out here the nights were cold and bitter, we'd have to stock up on wood so the fire would burn bright and get up alternatively to restart it, even if only Alistair and I did it.

Marcos suddenly stopped humming, squinting his eyes to peer at something behind me. I already knew who it was, as their scent had wafted towards me as the wind changed direction.

"Alistair, you're back." Keiko smiled, greeting him.

I smiled as Alistair made eye contact with me, his silver eyes causing the moon to reflect off of them beautifully.

I ignored my wolf, padding over to greet him with a hug. Normally unmarked females weren't allowed to touch other males, but we'd dismissed the rule as an indication of our trust for each other.

Alistair's intoxicating scent rushed into my nose as he held me in his embrace, but my wolf seemed to be on edge as we did this, her angry growls causing me to pull away from him.

She repeated that same line in my head, anger oozing out of her. Alistair brushed past me, indulging in a conversation about trees with Marcos as I finished up the deer.

My eyes flickered up a few times to watch Alistair, who caught my eye a few times as well. He winked, mock saluting me while Marcos rode on his back.

Alistair's mate had rejected him for their Alpha, who'd already taken the virtue of all the other females in their pack. He'd been heartbroken and couldn't stand the thought of seeing her every day, so he'd cut all the ties to the pack and left, choosing to live his life as a rogue.

I sighed, leaning my head on the tree I was sitting under. The deer had long since finished cooking, and now Keiko was sharing the pieces out, with mine the biggest.

Alistair put my food by my feet, sitting beside me and looking down at me with his silver eyes. My heart thumped in my chest as he smiled, nudging me slightly with his elbow.

"What's got you so quiet?" he asked, putting a piece of the food in his mouth.

I shrugged, staring ahead and leaning my head onto his broad shoulders. It was the twilight hour, with the moon at its peak and the sky it's darkest.

"My wolf," I muttered, picking up the deer and taking a bite out of it.

Alistair chuckled, apparently finding my argument with my wolf amusing.

"You and your wolf are one, having an argument with her is like arguing with yourself," he said.

I laughed softly at his answer, leaning onto his shoulder and watching the stars twinkle above us.

Alistair shifted his arm, wrapping them around my waist and pulling me closer to him. My heart fluttered at this action, but my wolf paced restlessly in my head.

I brushed off her comment, burying myself deeper into Alistair's chest and breathing in his scent.

My eyes slowly fluttered closed and I could only hum responses to Alistair's questions. Soon, I drifted off into sleep, barely noticing when Alistair leaned down and planted an amatory kiss to my lips.