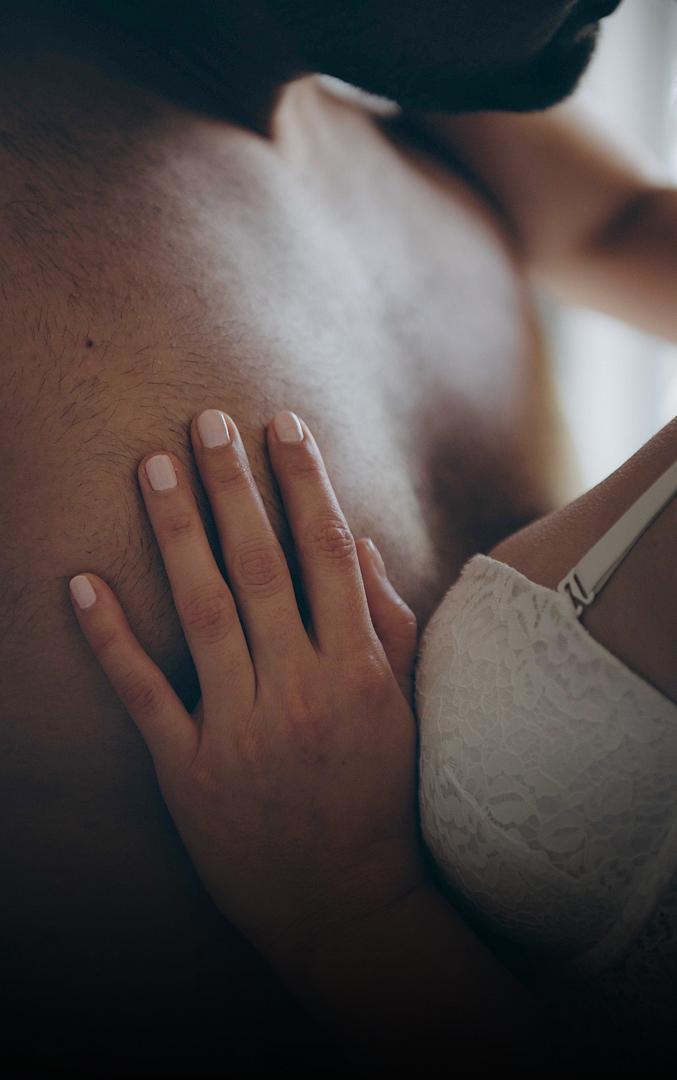 I throw myself onto the bed and look at the ceiling.

Shit. What is wrong with me?

Raising my hand to feel my nipples hardening, I can’t understand why the hell I’m feeling so restless.

I was just at the beach.

Nicole had begged for my company, and I had never been able to say no to my best friend. Nothing ever stops her from her plans anyways, not even the fact that I actually had to meet my boss today.

Once we arrived at the beach, Nicole threw her bag onto the sand and took her pink tank top off just before pushing down her white miniskirt.

“What are you waiting for? Let’s go for a swim!” Nicole said impatiently and started pulling my strapless dress down.

She knows I’m a bit insecure when it comes to my body. It doesn’t matter how many times people say I’m beautiful. I still feel like someone’s looking at my flaws and taking notes.

Boobs that could be bigger? Double-check.

I’m fucking twenty-nine years old and still have body issues. I do love myself, don’t get me wrong. It’s just that some days, I just don’t like what I see in the mirror, you know?

“Oh, shut up! You look beautiful! I’d kill to have those legs!” Nicole crossed her arms for a second and smiled. She cupped my face and looked me straight in my olive green eyes.

“Only because I’m right” Yep. No one knows me better than my childhood friend Nicole.

“Alex just texted.” I changed the subject while putting my phone back in my bag. “He’ll be here in an hour. I have a meeting with my boss in a couple of hours, so is it okay if I leave when he gets here?”

Nicole rolled her eyes. “Why do you need to meet your boss? Doesn’t he usually just call?”

“I’m guessing the Pascoal Villa is going to be rented out for the month. Maybe he needs to give me some specifics about what the tenants need.”

I have what most think is the weirdest job. Well, even I can’t really explain. I’m pretty much a hotel hostess, except it’s not a hotel. It’s a bunch of houses and villas.

My boss, Mr. Torres, a seventy-eight-year-old retired lawyer, has dozens of houses and villas which he occasionally rents out.

Making money without moving one finger. That’s what people think he does.

My job is to do whatever needs to be done to keep the estate in good condition for the tenants and get them everything they need to feel at home.

I’ve had this job for five years now and rarely see Mr. Torres in person. I know he trusts me, and we usually only talk on the phone before new tenants arrive.

“That means Alex is giving me a lift home? Shit, Em, you know what that Colorado Z71 does to me!”

I smirked because I knew she wasn’t talking about the truck. “Yeah, you’ve made sure I do know! You’ll thank me later, after that libido of yours has quenched her thirst!”

Yep. She’ll thank me later, and she’ll definitely tell me about all the ways Alex fucked her in that truck. Ugh. I need a fuck buddy like Alex.

Without a second’s thought, Nicole jumped in the water. I kept walking along the shore, feeling goosebumps every time a wave hit my ankles.

“It feels so fucking good, Em!”

Nicole’s positive energy was so contagious that I took a deep breath, closed my eyes, and dove in the water.

As I was coming up for air, I felt my face abruptly hitting something hard. I placed my hands forward so that my chest wouldn’t hit it as well, and then I realized my palms were against a bare tattooed chest.

Did I just moan?

I didn’t know how long it had been, but I was just staring, my hands still on those hard, tattooed pectorals, surprised at how soft that skin was and feeling how hot my hands were getting.

My hands started sliding down, and my eyes took in every single inch of that sun-kissed skin till I felt my waist being held, and my whole body quickly pushed up and back against a wave.

Losing my balance while trying to straighten back up, I looked up.

This gorgeous man just pushed me?

“That was unnecessary!” I sounded annoyed because I fucking was, even though the man standing in front of me was quite possibly the hottest man I’ve ever been so close to.

The blue in his eyes matched the color of the sky. The dark brown hair nade them stand out even more.

Sweet Jesus! What those lips could do to me! Mmmm… Shit.

The thought that he had pushed me away from him because he was obviously not interested crossed my mind. So, I instinctively attacked before showing any kind of embarrassment.

“I’m very much capable of walking away, thank you very much! No need to push me!”

He closed his mouth just as fast he opened it. I could see his Adam’s apple going up and down as he raised his right hand to smooth his hair back.

He didn’t seem to care about what I had just said and just looked at me while I frowned and turned around to walk back to shore.

“What just happened?” Nicole was again her romantic self, the kinky kind of romantic—you wouldn’t see it if you didn’t know her.

“Did he ask you for your number? Did he give you his number? What’s his name? How ~hard~ are those abs?”

Nicole was all giggles, and I’m pretty sure she was looking at him, sizing him up, and back at me.

“Nic! Please!” I headed back to my towel, and Nicole couldn’t let it go.

“It’s been too long, Em. If you don’t put yourself out there to meet a guy, even if it’s just for a bit of fun, then I might take it into my own hands to help you.”

“Nic. It was embarrassing, okay?” I lay on the towel.” It was an accident, and we barely spoke. Well, he actually didn’t. At all.”

He didn’t say a word. Not one. Am I that unappealing?

As soon as I closed my eyes, I felt my body being pressed against the towel.

After he kissed my forehead, Alex jumped up and repeated that attack on Nicole. Every time I see them together, I can’t help but wish they were more than fuck buddies.

God knows I’ve tried talking them into actually being boyfriend and girlfriend!

I’ve known Alex for as long as I’ve lived here. He was the first guy I met here, and even though I had at first considered hooking up with him, I realized we would be better off as best friends.

Let’s be honest here. It wasn’t easy. Him being blue-eyed, with sandy blond hair, muscular, six-three, paired with an awesome laidback personality definitely made me question that realization.

Turns out, just because a guy is hot as hell doesn’t make him your type. Whatever that means.

So that’s Alex. My not-my-type-hot-as-hell friend.

“I got you invitations to that Black and White Masquerade Party!” He smiled at both of us and winked at Nicole.

Of course, he did. He owns the freaking nightclub…

“It’s been that long, uh?” Alex said, laughing and looking at me.

“Shut up, you two.” They’re right. It’s been too fucking long. “I have to meet my boss in about an hour, so I’ll leave you guys now.”

“Be ready at nine pm!” Alex said while picking up Nicole bridal style and walking towards the water.

“I’ll be at your house early so we can get ready there!” Nicole yelled just before being thrown into the water with her arms still around Alex’s neck.

I love those two.

So, yeah. Here I am, looking at the freaking ceiling, touching a nipple with my left hand and slowly moving my right hand down my stomach, under the hem of my bikini bottom.

Why can’t I get that guy out of my mind? Why the fuck did I have to touch his fucking delicious chest?

Why the fuck did he not just grab me there and kiss me ~and~ take me like I was the last woman on Earth?

Ugh. I need a shower. That’s what I need. I do ~not~ need to fantasize about a guy that actually showed no interest in me and literally, ~literally~, threw me away like a freaking unwanted frisbee!

Nicole is right. I do need to get laid. I can’t even remember the last time that happened. And I’m not talking about a relationship. Nope.

That was a year before I moved here five years ago. Since then, I’ve been totally fine with occasionally going out on a few dates and having casual sex for a while. Not that it happens often.

Well… Two guys in five years, to be exact.

I do remember the last guy, though. James. Made me come as many times as I needed release. Well, maybe a few more times than that, actually. Damn, I miss that feeling.

Fuck. I so need to have sex.

I was struggling to keep my waist underwater. I wanted to get closer, but there was no way my erection was going anywhere anytime soon.

You’d think fucking freezing water would stop your cock from getting this hard. Fuck.

My breathing was getting difficult. She had her wet hands on me, and as I felt them moving downwards, it felt so good.

For a second, I forgot where I was and imagined she’d lower her arms and hold my shaft.

I imagined pulling her legs around my waist, my hand grabbing her round cheeks, my fingers getting closer and closer to her wet opening.

I snapped out of that picture at the speed of a blink. She just said something, but I had my mind in the gutter way too deep to listen to her voice.

Why the fuck is she frowning?

I watched her get out of the water. It was like she was walking in slow motion. Her hand reached her curly light-brown hair over her left shoulder all the way down to her breast.

She squeezed her hair, and I clenched my fists.

All I could see was drops of water falling on her bikini top, sliding down her covered breast, and I imagined my tongue catching each drop as I licked her nipple. Drop by drop.

FUCK. I need a drink.