Taylee Harris has been raised by wolves. Now that she’s eighteen, she is preparing to reach maturity as a wolf herself—until a mysterious incident in the woods one night leaves her unconscious and bloodied. The young man, Tavis, who nurses her back to health, tells her he is a bear...and so is she. Upon this revelation, Taylee must navigate a new world of allies and adversaries who all want to claim her for their own, all the while growing in love and adoration for her one true mate. 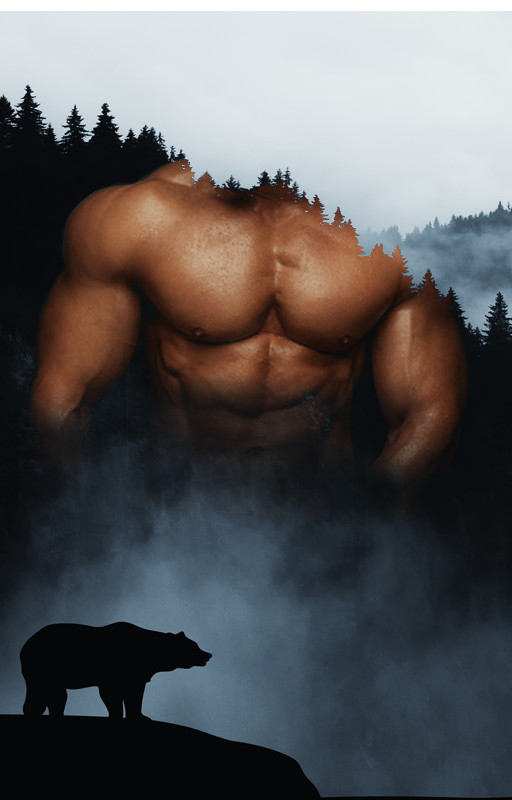 Taylee Harris has been raised by wolves. Now that she’s eighteen, she is preparing to reach maturity as a wolf herself—until a mysterious incident in the woods one night leaves her unconscious and bloodied. The young man, Tavis, who nurses her back to health, tells her he is a bear...and so is she. Upon this revelation, Taylee must navigate a new world of allies and adversaries who all want to claim her for their own, all the while growing in love and adoration for her one true mate.

She knew she was alone and not alone.

Even before she came to, she knew it. Once her eyes opened, they confirmed it.

The treetops were indistinguishable in the thick darkness.

She lifted her head and it throbbed. Her breath burst out of her in short, shallow gasps, though she felt as if she were digging down to her core for air.

One glance down—even that was an accomplishment, through the pulsing pain at the base of her skull—and she found she was in even more trouble than she previously reckoned.

Given that she wore nothing but a pair of underwear, she should have been half frozen. But her skin felt too different for her to register the chill.

Because it was caked in blood.

She reached into the recesses of her mind for a name, a location, any identifying information.

If only she could remember what…

She coughed. She half-expected blood to leak from her lungs. Thank goodness it didn’t.

The fire in her head had simmered down to hot coals. Sufficient to let her get to her feet, slowly, shakily, as if she were an infant learning to support herself for the first time.

She didn’t trust herself to run. But the sounds she was only now starting to hear told her she had to.

Who was her mother?

Another howl, long and insistent.

She was Taylee. Taylee Harris.

No, eighteen. Eighteen years old, as of 31st August, three weeks ago.

It would take time to adjust to her new age. But right now, between avoiding death and remembering exactly who she was, she couldn’t give anything else much thought.

She stumbled and fell, slicing her knee on what must have been a jagged stone. Instinctively, against her better judgment, she shrieked in pain.

The sound pierced the night, stood out against the howling. A small sound. A human sound.

She hated to scream. But she did it a lot.

She couldn’t help being afraid of things.

Most things, if she was honest with herself.

The blood was pooling, she could feel it. But she had to keep moving.

Now, she was cold. The dried blood made her every limb feel foreign, but it could no longer keep the wind at bay. She limped along as fast as she could.

Was the howling fading? Could her ears have deceived her?

Very likely, they were deceiving her. She didn’t trust her ears any farther than she could throw them. In fact, this was the least she had trusted any of her senses, ever.

She could see the headlines, the obituary.

They flashed before her eyes, more painful than any throb in the head.

If she didn’t make it, if she died here, her family would have no idea—

How many of them were there?

Three. There were three.

Just remembering them alleviated some of the fear.

No, too much work for a recovering brain. One by one, then.

Father. Nathaniel. Loved chess. Sang opera beautifully even if he had to make up words that sounded Italian.

Of all things to remember.

Any helpful memories? Was that too much to ask?

Maybe fast enough to make it out alive. Not unscathed, but alive.

Sister. Charlotte. Eleven. Knew too much for her age. Those eyes. Too wise. Too sad.

Oh, Charlotte. I miss you.

How could she miss someone she was only just beginning to remember again?

Her family were all wolves.

But she’d never heard any of them howl like this.

Keep running. Don’t stop. Don’t even falter. Half a second, half a hesitation, and it could all be over.

If she lived through this, she would talk to herself madly for the rest of her life.

People would think she was crazy.

No one would mate with her.

No one would even try.

Not that it mattered until she could shift into her wolf form to begin with. She had never seen what she looked like as a wolf. And she was getting impatient.

How could she dwell on that at a time like this?

A crunch of crushed twigs not far behind her.

She whirled around. Nothing to be seen.

Her eyes were adjusting. Maybe she could trust them after all.

Even so, she didn’t recognize this forest. Sure, she had much of her home state left to explore—whichever state that was…

She directed herself in her mother’s voice. Like something out of Mother Goose.

Well, this was not Olympia, Washington.

Which meant it was…where?

No howling. She strained her shamefully human ears. None to be heard.

She found herself desperately wishing she could tell the time.

If she knew the time, she could determine how long it would be until daybreak.

But no stars. No moon. And no howling.

In fact, the only noises were her own thrashing through the brush, her own ragged, inconsistent breath, her own frenzied heartbeat.

In perfect synchrony, her left foot lodged under a surprisingly substantial bough, sending her crashing over it.

Her shin hit the branch, and in the stillness, she heard the dull crack of bone against wood.

She let out an, “Ah!” Giving herself away.

But in all this silence, who could still be trying to find her?

Too soon for that thought.

A crunch. A deep crunch, from very nearby. The crunch of leaves under a heavy, heavy foot.

Almost certainly not a human foot.

Then another. The other foot.

Taylee could not move. Her shin stung, and her foot was caught beneath the limb. It was all she could do not to curse aloud.

The something had followed her.

The something was coming.

The something was here.

She gave a wild heave, but her weight did not shift forward. She remained.

As if fear wouldn’t have paralyzed her enough.

Where, oh where was her wolf form?

Show yourself! Defend yourself!

She even tried shutting her eyes and willing it into existence.

And she was still human.

Crunching and grunting. Shuffling. A rustling of fur.

But not wolf fur. Clearly, this creature carried itself differently than a wolf.

It was built differently.

Was this an animal? A bonafide, real, non-shifting animal?

Was this how her life would end?

With another heaving effort, nearly mad with panic, she turned herself partially over so at least she faced up, avoiding a mouthful of soil.

And in that simple motion, she came face to face with her follower.

A great black bear, larger than anything she had ever seen, seeming to eclipse all the trees around it, standing on its hind legs. Towering over her, in fact.

Her jaw hung slack. Thankfully, she could not scream. But nor could she do anything else.

Anything, that is, but stare helplessly into its eyes. The glinting gold eyes it had fixed on her.

Awareness stabbed her again—awareness of her near-nakedness, her terrible vulnerability, the blood on her skin that could not have been hers. Whose it was, she couldn’t begin to guess.

All this whirled across her brain as she held the bear’s gaze. Her thoughts tore to and fro like a tornado.

The bear, still up on its hind legs, took another step closer. Taylee felt herself slump back.

And she prepared for the end.