Imagine lying in a hospital bed and the doctor who pulls the curtain back to treat you is the one who got away. Even if you never really had her in the first place. She’s not only your high school crush, she’s the ex-girlfriend of your ex-best friend. The one girl you’ve always wanted.

#1: Try not to take offense that she snuck back into town without telling you—six months ago.

#2: Rekindle the friendship to ease the awkwardness. But… DO NOT enter the friend zone.

#3: Ignore the fact that she went speed dating the night before. Take it as good a sign—maybe she’s looking for a relationship.

#4: Attempt to keep the two of you out of the town gossip blog and away from your large family.

#5: Don’t get deterred when you find out the past is about to repeat itself. Because the man she met at the speed dating night is your best buddy from work.

You sat back and let her slip away once, you won’t do it a second time. 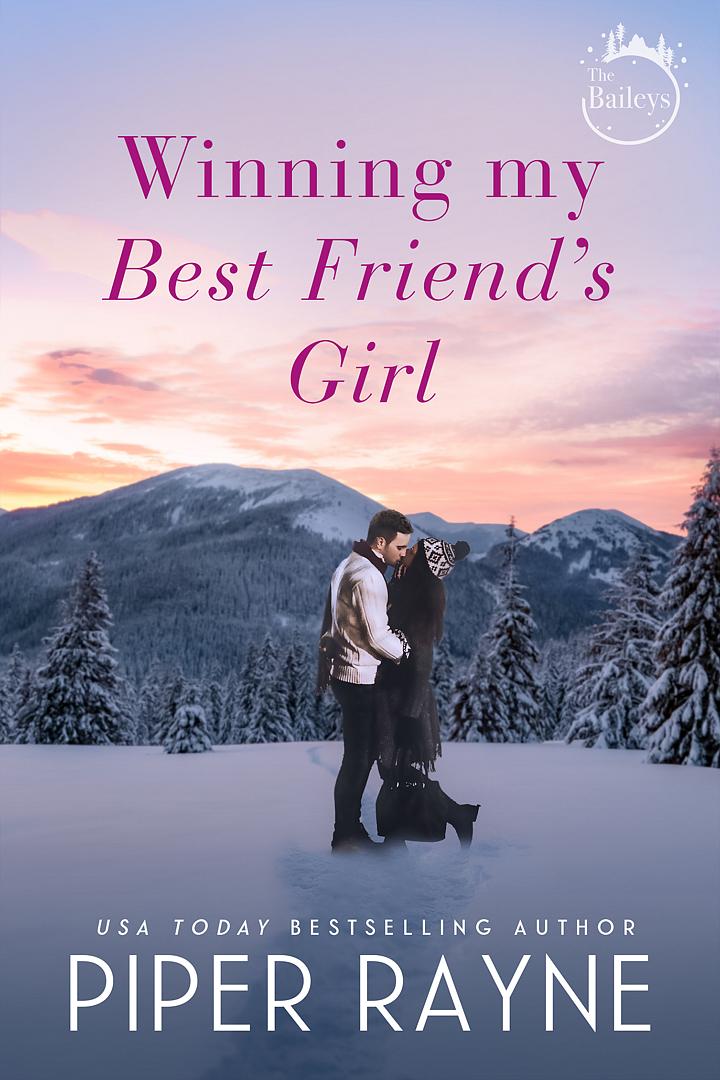 Imagine lying in a hospital bed and the doctor who pulls the curtain back to treat you is the one who got away. Even if you never really had her in the first place. She’s not only your high school crush, she’s the ex-girlfriend of your ex-best friend. The one girl you’ve always wanted.

#1: Try not to take offense that she snuck back into town without telling you—six months ago.

#2: Rekindle the friendship to ease the awkwardness. But… DO NOT enter the friend zone.

#3: Ignore the fact that she went speed dating the night before. Take it as good a sign—maybe she’s looking for a relationship.

#4: Attempt to keep the two of you out of the town gossip blog and away from your large family.

#5: Don’t get deterred when you find out the past is about to repeat itself. Because the man she met at the speed dating night is your best buddy from work.

You sat back and let her slip away once, you won’t do it a second time.

Book 8 in the Baileys Series

I’m an easygoing guy. Not a lot gets under my skin.

My dad was a man of many quotes. At least when it came to me. Looking back, I think it’s because I was the sensitive one in the family.

He’d say he wasn’t clever enough to come up with them on his own, so he never recited one without giving the author credit.

“Winning means you’re willing to go longer, work harder, and give more than anyone else,” by Vince Lombardi, was his favorite to use when I was struggling.

Didn’t matter if it was sports or academics, he’d say that quote to me. I didn’t figure out the meaning until years after his death, and even then, my oldest brother, Austin, had to explain it to me.

There was a time in my life when I didn’t fight the battle because I was more afraid of losing something than winning something. I promised myself I’d never make that mistake again.

Which is most likely why the battles I pick now are fires. Whether I’m jumping out of a plane and parachuting into a forest fire, or carrying someone out of a burning house, I always win.

These fights feel safer than the ones that could break my heart.

Lou climbs into the firetruck right after me, sitting across the way. The sirens go off as the truck rolls out of the station.

Lou and I attended the fire academy at the same time—which was right around the time I lost my childhood best friend and the girl I love.

“Romeo, tell your sister thanks for me,” he says, winking.

A woman once referred to me as her knight in shining armor after I used the Jaws of Life to free her from a wrecked car. She’d plowed her car over an embankment because she was intoxicated.

But it was her repeatedly asking me to be her Romeo that earned me a nickname that makes most people—and by people, I mean women—think I’m a player. I’m not, in case you’re wondering.

“For the blind speed dating thing she’s doing over at Tipsy Turvy.” His perma-smile says he met someone.

Lou’s eyebrows raise. “Is that what we’re calling it? Work?”

Monk blares the siren because people are shitty and can’t take a second to pull their car to the side of the road for us to get through.

“I have no idea what you’re talking about.” I glance out the window because I’m in a crappy mood. Lou is riding high after his speed dating night and I just don’t feel like hearing about it.

“Proby wan Kenobi was at the hospital and overheard Samantha talking about a date you two went on.”

Doesn’t matter though. Nothing happened.

Lou’s the kiss-and-tell guy. I’m not. “Nothing. We had some drinks.”

For most of the night, Samantha and I discussed this Adventure Alaska Expedition she’s interested in.

I guess she does Spartan races all the time and the next thing she wants to conquer is some seven-day adventure race where you’re with three other people and have to navigate with only physical maps.

I will say her excitement, and adrenaline, is a high for me. She didn’t wince when we talked about me heli-skiing and speed riding down a mountain.

She said it sounded thrilling and she’d love to go sometime. The fact that she loves crazy shit like I do upped her attractive level by ten.

“Bullshit,” he says. “I’m not asking for specifics, but a ‘I banged her over the kitchen table’ would suffice.”

“Jesus, Lunchbox, one day you’re gonna meet a woman who will make you second-guess sharing all the details,” Greasy says, shaking his head from the seat beside us.

Lunchbox is Lou’s nickname because the man eats all the shit out of the fridge. Lou’s the one always asking if he can have one fry or if you’re going to eat all that.

He’s lucky his side job of carpentry helps him keep the weight off.

Lou flips off Greasy. “We’re not all married with fifty kids.”

“That’s offensive,” I say with a grin.

Greasy only has five kids, though they’re all under six, so when they visit the fire station, it’s like a daycare—but the sappy love look on his face when his exhausted wife walks through the garage doors is pretty awesome.

I guess he won his battle.

Lou waves off my comment.  “Your parents had nine kids, not you.” We sit in silence for maybe a minute because Lou hates quiet. “Aren’t you gonna ask me?”

Now he’s the one sporting the insulted look. “The girl from speed dating. Your sister didn’t tell you?”

“No, she lives with Colton now. She’s moved out.”

He nods as though he didn’t remember.

“So she’s amazing,” he says without me asking for more information or really paying attention.

I love the guy, but this is same old, same old for him. This girl will have morphed into a blood-seeking piranha by next week. As much as I don’t do relationships, Lou thinks he wants one. He doesn’t.

“Okay, boys, hate to interrupt the locker room talk, but we have a fire to fight,” Captain says from up front as we pull up to a burning apartment building.

The fire isn’t out of control yet by the looks of it, but it will be if we don’t get in there.

“We’re first on the scene. Since you’re so chatty, Lunchbox, you get to go in first with Romeo behind you. Greasy, you get the hose connected…”

The Captain continues to rattle off responsibilities, and we file out of the fire truck.

After getting our gear together and pulling out our axes, Lou and I head in to investigate the fire. My adrenaline kicks into overdrive the closer we get to the building.

Once we’re inside the smoke-filled stairway, Lou talks again. “So this girl, she’s like no other girl I’ve ever met. She’s smart and gorgeous. She thinks I’m funny.”

“Then she must be a keeper,” Captain says over the radio. “Concentrate on the fire.”

Lou kicks in the door of the first apartment, and we walk through, scouring the rooms for people who might be trapped or too afraid to run.

“Tank is coming in now with Greasy,” Captain tells us.

I press the button for my radio. “Apartment one is clear. Filled with smoke, no flame.”

“We went to the bar for drinks afterward. Turns out she was there once before when I was, but we must not have written each other down because we didn’t connect,” Lou says as we walk up the stairs to the second floor.

“I’m thinking of taking her to your brother’s restaurant,” he says.

“Why would you come to Lake Starlight?” I ask.

“This is the type of woman you wine and dine, not take to Tipsy Turvy to play darts and drink beer.”

“I’m not sure any woman is the kind who’d prefer to be taken to Tipsy Turvy on a first date. That’s more of a ‘we’ve been dating for a while and there’s a big game on, want to go for wings and a beer’ kind of thing.”

I head to the stairs to climb up another floor.

“Are you dissing my game? I’ve got better game than you.”

“Captain, I’m not sure this building is occupied. Every apartment is bare of furniture,” Tank says over the radio.

I stop on the stairwell in case our instructions change.

“You’re right, the place is empty. Shift our search for the source at this point.”

Tank and Greasy follow us up the stairs. “We’ll go to three,” they say, walking by us as we stop on the second floor to check behind the doors.

“I’m telling you. This girl is a game-changer,” Lou says.

“You guys wait and see. You’ll be getting wedding invitations in the mail within a year. I promise.”

“You know all this from one night?” I ask.

I kick open a door and a cloud of smoke billows out into the hallway, making me unable to see an inch in front of me. I can’t deny I too believe you just know when you know.

I felt a pull in my heart the moment Stella Harrison walked into my classroom in the fourth grade—her brown skin, pigtails and big dark eyes drew me in.

My crush continued for years until she and Owen started to date. Then I tried to ignore that pull—which is when everything crumbled around me.

“Nothing on level two, we’re going to four,” I say into the radio.

We bypass Tank and Greasy on the third, where they’re outwardly laughing at Lou.

“I’m going to prove you all wrong,” Lou says, and there’s a conviction in his tone that makes me believe that this mystery girl could very well be a game-changer for him.

I mean, doesn’t that happen to everyone at some point if they’re lucky? A man finds a woman who makes him believe in marriage and makes him ready to push away the possibilities of all other women?

“Does she have a name?” I ask as we finish climbing from the third to the fourth floor.

I turn back to face him. A two-by-four crashes down between us with flames across the length of it. I step back and my head hits something hard and unforgiving and I crash to the floor.