‘Wired in’ to her computers, tech agent Sophie Ang has been content in her clean, cool tech lab, where she chases criminals online, continuing a dance in the dark with the enigmatic vigilante known as the Ghost.

Tumultuous changes eject her from her FBI agency cocoon to the front lines, where she finds herself in partnership with a brave overbearing, larger-than-life ex-Special Forces operative, Jake Dunn.

The two climb walls, dodge bullets, free captive children and dig up bodies for a case that might cost her life—and has already taken her badge. 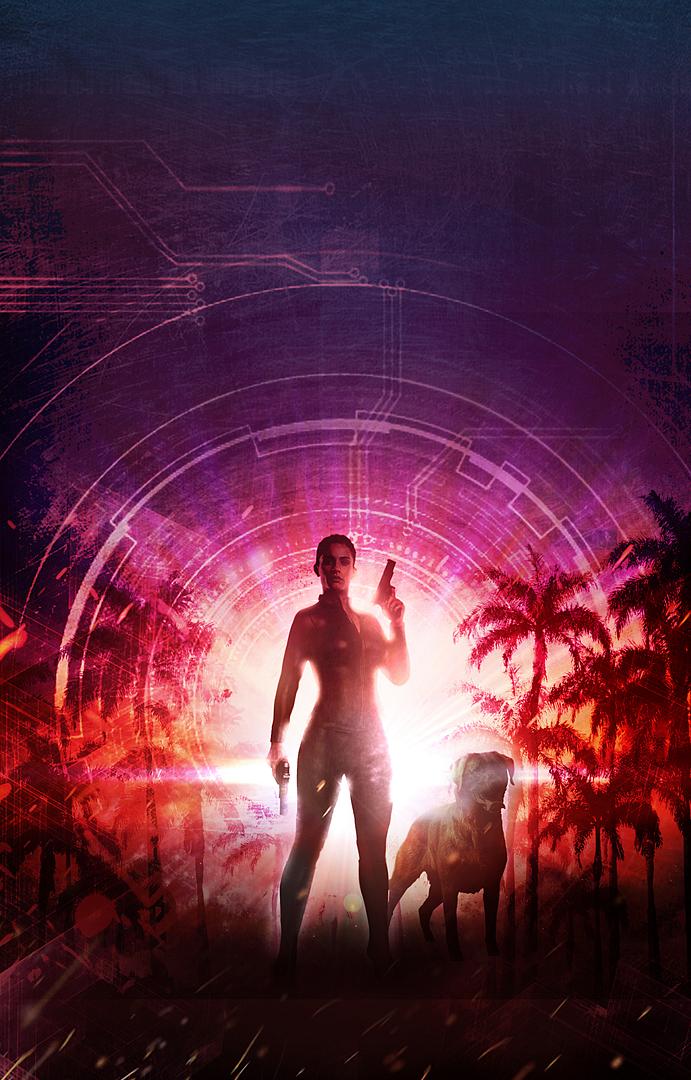 ‘Wired in’ to her computers, tech agent Sophie Ang has been content in her clean, cool tech lab, where she chases criminals online, continuing a dance in the dark with the enigmatic vigilante known as the Ghost.

Tumultuous changes eject her from her FBI agency cocoon to the front lines, where she finds herself in partnership with a brave overbearing, larger-than-life ex-Special Forces operative, Jake Dunn.

The two climb walls, dodge bullets, free captive children and dig up bodies for a case that might cost her life—and has already taken her badge.

“Unraveling external selves and coming home to our real identity is the true meaning of soul work.” Sue Monk Kidd

Children shouldn’t be treated like slaves. Anger tightened Special Agent Sophie Ang’s hands as she adjusted the binoculars a little more to focus in on ten kids of various ages, bent over in a water-filled patch of land planted in the deep green, heart-shaped leaves of the Hawaiian kalo. They wore bathing suits and palm frond hats as they worked in the hot sun, an adult supervising from the shade of a nearby palm tree.

Taro farming was backbreaking work, and it looked like the Society of Light cult was using their smallest members to work with the submerged tubers, a staple of the Hawaiian diet. Sophie’s partner in the operation, Ken Yamada, shifted restlessly beside her in the camouflage surveillance tent on a rise of ground across the river from the compound. “Ten is more children than we were told about,” he murmured.

“We have to locate the two targets,” Sophie said, for the benefit of their SAC, Waxman, monitoring through their comms. “Can’t identify the children positively yet.” The homemade hats hid the red blond hair the children’s mother had told the agents to look for. Sophie widened her scan, and took in the rest of the cult’s property.

A high wooden wall provided cover and security for the compound deep in the Waipio Valley on Hawaii. Surrounding their location were the vast, steep, green-jungled walls of the largest, deepest valley on the Big Island. Rising to breathless heights, bisected by a giant waterfall at the end, Waipio was a beautiful and untamed place where wild horses roamed and people lived as they had a hundred years ago. Midday sun overhead increased steamy humidity, and gnats and mosquitoes buzzed over the FBI’s pop-up cover in a noxious cloud. Coconut palms and tropical trees broke up a sweep of pastureland before the compound, dotted with livestock grazing beside the wide, jade-green river.

The site seemed to have been chosen for maximum defensibility. Set deep in a valley that was accessible only through a single steep one-lane road, the complex was walled in wood and topped with razor wire. From their vantage point, they could look down into the grounds. Yurts were clustered like chicks around the hen of a big, metal, barn-like structure, probably where the cult met as a group. Its functions would be revealed as their surveillance progressed. “See any armaments?” Sophie whispered.

Sophie’s earbud crackled with their Special Agent in Charge’s cool voice. “Get me eyes.”

“Roger that, sir.” Sophie turned and opened a plastic case. She took out the small, high-powered video camera with its instant wireless streaming abilities. The reverse camera showed Sophie’s image as she screwed the camera onto a tripod and aimed it at the area Ken had identified. Her golden skin looked sallow in the little square, her large brown eyes haunted—but at least her cropped hair was too short to be any different than usual. Sophie applied her eye to the viewfinder and adjusted the high-powered lens.

A small platform, camouflaged with branches, was built into the tall avocado tree in the far corner of the compound. A man wearing green camo gear sat in the lookout, a rifle resting on the narrow parapet around the nest.

“Seems pretty extreme. Why would a peaceful cult out in the boondocks of this valley need to be walled and guarded with firepower?” Ken said.

“And yet here we are, surveilling them,” Sophie muttered.

“Right. Just because you’re paranoid, it doesn’t mean they aren’t watching you.” Ken’s severely handsome face was unforgettable when he smiled. Good thing he was gay. The last thing she needed was to be attracted to a partner. A devastating breakup with her almost-boyfriend Alika six months ago had left Sophie lonely, prone to wondering if she’d always be that way.

“Stay focused. How many unsubs?” Waxman’s crisp voice brought her back on task.

They continued to gather data all day, counting thirty adults, mostly white, in the twenty to forty-year-old age range. They tracked the flow of behavior patterns: children, supervised by a single adult, worked the taro fields in the morning while adults did other tasks among animals and gardens. A noon meal was held all together in the main building. Another shift of afternoon work by adults in fields, gardens, and outbuildings went on as the children were seated in a circle for some kind of instruction, in the shade of the sniper tree.

The cult leader, Sandoval Jackson, distinctive in orange robes trimmed in gold, walked the grounds, trailed by a woman attendant. Flowing silver hair and a full beard distinguished him from the severely buzz cut hairstyles of the other adults, all wearing various shades of orange robing.

“What does this cult believe in?” Ken kept his binoculars to his eyes as Sophie filmed the children, holding small whiteboards, participating in school-type instruction.

“The Society of Light promotes a blend of Sufism and Hindu beliefs.” Sophie had put together a quick case file before they took the chopper out of Honolulu that morning. “Jackson apparently had a revelation that led to his development of the Society. He’s been recruiting members of the well-heeled yoga set.”

Sharon Blumfield, mother of two, a Society member that had “escaped,” had initiated a case against the cult to get her children returned to her. It had come to the FBI after the Big Island PD had asked for their help in investigating the child kidnapping complaint.

“I don’t see any abuse happening from the data you sent, or from the visual surveillance.” Waxman’s voice sounded tinny and detached. “Where is the father of the children?”

“They were fathered by Sandoval Jackson, the cult leader.” Sophie’s throat tightened on her reluctance to speak the words. She wanted this case. She’d pushed to get out from her computer lab and into the field to check out the complaint. The endless series of computer file reviews and hard drive reconstructions that made up the bulk of her work had been hard to concentrate on and find fulfilling, after the drama of her last case.

For the first time in her life, Sophie felt restless ‘wired in’ to her computers. She wasn’t allowed to use DAVID, her data analysis program. She missed Alika and worried over his recovery from injuries, even though they weren’t a couple and she was having no luck locating the enigmatic online vigilante, the Ghost, whom she’d uncovered on that last big case, though they continued to chat and flirt online.

Going to the Big Island to help some children be reunited with their mother had been a welcome change of pace.

“The cult leader is the father?” Waxman’s voice was sharp. “We have no grounds for her kidnapping case, then. They are with a parent.”

“Sir. They are being prevented from joining their mother,” Sophie argued. “That’s parental kidnapping.”

“This is an armed compound filled with crazy religious civilians. Ever heard of Waco? We have no grounds to confront these people. Pull back. Let’s discuss at headquarters.”

Sophie bit her lip. “The children are being made to work long hours of manual labor. They aren’t in school.”

“Yes, and you see that with our migrant farm workers all over this nation,” Waxman snapped. “Also, I notice on the video that they’re being instructed and getting some kind of education, even if it’s not the kind you or I might choose. No laws are being broken here. This is a custody issue between parents. Once the mother has an injunction from family court returning custody of the children to her, local PD can show up with a custody order and get them out and return them to her.”

Disappointment curdled Sophie’s stomach. “There must be something illegal going on there, or why would they have defensive capabilities?”

“I gave you an order, Special Agent. Stand down, pack up, and report to HQ for a team meeting review.” A decisive click in her earbud made her wince as Waxman disconnected.

Ken was already stowing his binoculars in their molded plastic case. “You pissed him off.”

“Son of a goat herder’s pox-ridden three-eyed cousin,” Sophie muttered in Thai. “I know. I hate that.”

“Well, he always goes easier on you than the rest of us.” Ken slanted her a glance. “You’re his pet.”

Sophie didn’t reply. That Waxman favored her was a fact—this investigation wouldn’t have gotten even this far without that factor.

Her heart sank for the woman who’d escaped from the Society of Light and brought the case to their office via Big Island PD. A slim, narrow-hipped blonde with the kind of leathery skin that came from too much time outdoors, Sharon Blumfield had never stopped crying as she shared a story of recruitment, inclusion, virtual slavery, and degradation.

“I stayed in so much longer than I wanted to,” Blumfield told them via Skype as they considered the case. “I didn’t want to leave without my children. Jackson replaced me long ago in his bed, and I began to fear for my life. The other mothers of his children have all left the Society, never to be heard of again—I think something happened to his other women.” She’d made ridiculous accusations at that point: that the women might have been sold into sex slavery, or become human sacrifices to enrich the crops. The cult believed in “aggressive reincarnation,” a process by which people could advance further in the wheel of reincarnation through serving Jackson and sacrifice. Blumfield claimed this had led to “terrible acts by people high up in the leadership.”

Captain Ohale, commanding officer of Hilo PD, sitting in on the video meeting, shook his head at that point. “Ma`am. You have no evidence whatsoever of any of these claims. We do take your complaint seriously, but without evidence of a crime…”

“My children are kidnapped and being held against their will,” Blumfield insisted. Sophie couldn’t stand it any longer, and had spoken up for their team, assuring the woman that they would check out the situation.

And now they were pulled off the case, just that easily.

Sophie looked back toward the walled compound as she and Ken folded the camo-printed pop-up surveillance cover. “I’ll get you out of there,” she murmured to the children in Thai. ~“I will find a way.”~

Sophie had more ways than most to get things done.