You Taught Me to Fly

Lucas Sullivan has a massive crush on one of the school’s most popular guys: Elijah Rhodes. Trouble is, the only person he’s come out to so far is his sister. And what are the chances Elijah could return his feelings? He barely even knows Lucas exists! But when fate throws the two seniors together, they discover they’ve been harboring mutual feelings for each other for a while. This is just the start of their love story! 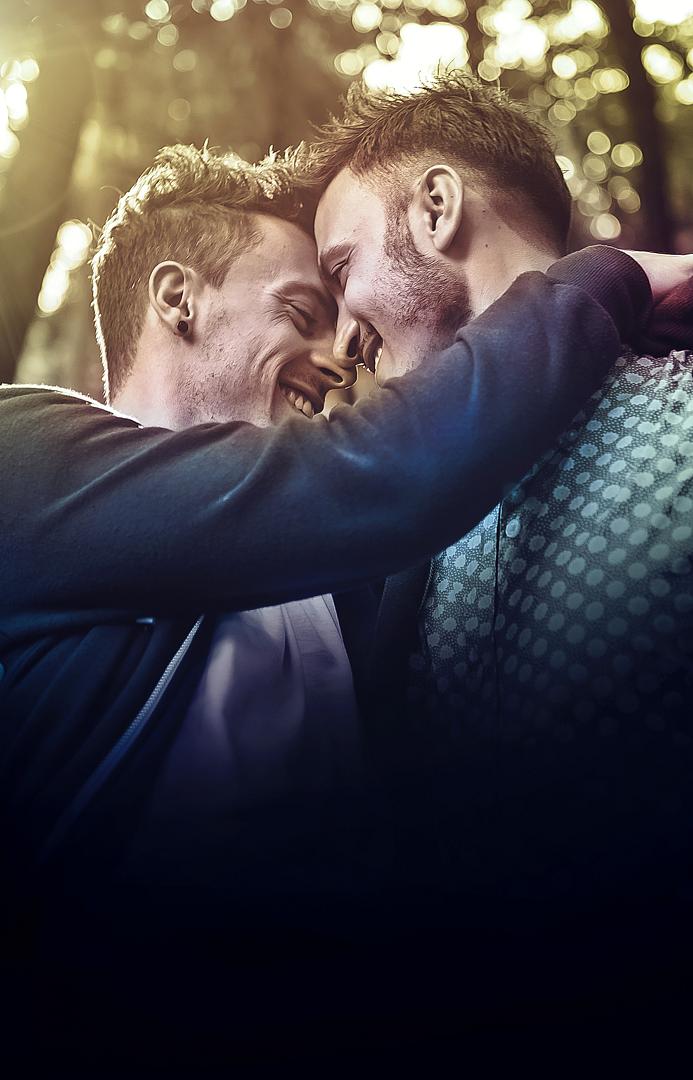 You Taught Me to Fly

Lucas Sullivan has a massive crush on one of the school’s most popular guys: Elijah Rhodes. Trouble is, the only person he’s come out to so far is his sister. And what are the chances Elijah could return his feelings? He barely even knows Lucas exists! But when fate throws the two seniors together, they discover they’ve been harboring mutual feelings for each other for a while. This is just the start of their love story!

“You’re staring again,” Autumn, my sister, said to me.

She’d been adopted by my parents about four years after me and my twin (not identical) brother, Dave, had been born, just a year younger than us.

She was as much my sister as Dave was my brother, because family isn't always blood.

Anyways, the most popular guy in the school had just entered the cafeteria on his way back from lunch.

He was a senior in high school (same for me; both of us were nineteen years old due to our birthdays causing us to start school a year later than most).

Being a senior meant, if he wanted, he could go off campus for lunch, as long as he was back before the bell rang. I could do the same, I just chose not to.

Elijah Rhodes, that being my crush by the way, was twenty minutes early, which was…unusual. Normally he didn’t get back until five minutes before bell.

So…yes, I was staring. No, I didn’t want to admit it. Nobody knows I’m gay, except my sister.

I watched, unable to look away, as Elijah strode oh-so-confidently in his faded skinny jeans, converse sneaks, and tight white tee-shirt underneath an open button-up plaid shirt.

His hair was dark and unruly, perpetually always looking like he was just coming from having wild sex. He wasn’t muscular, but I loved that.

It was known to the whole school that he was gay. That’s why I had such a crush on him.

That and, whenever he smiled, which was often, it would light up his baby blue eyes, plus several other reasons.

Autumn lightly kicked my shin with her foot (we sat on opposite sides of the booth) after a few minutes of me watching Elijah.

Her kick did two things: brought me back from my incessant daydreaming, and made me notice his friends, a couple of them, starting to notice my stare.

I looked away, down at the untouched meatloaf on my tray where I sat in embarrassed silence.

“You really should eat,” my sister advised quietly. “Gym is next and you know how brutal your coach is.”

I made a face at the meatloaf, my stomach churning at the thought of eating it. “If I eat it, I’ll throw up next period for sure.”

“I’ll take passing out to throwing up, thanks.”

She sighed heavily. “Did you bring any allowance money with you?”

I looked up into her eyes to give her a do you not know me look. Of course I hadn’t brought my allowance money.

That was stashed in…a safe place…for emergencies only. This was hardly an emergency. I’d had a big breakfast! I was fine!

Okay, maybe I wasn’t so fine.

Autumn gave me a look of I told you so.

What was I to do? I certainly wasn’t going to—

“Here, you stubborn pillock,” Dave said, tossing a bag of my favorite brand of nacho chips into my lap as he slid into the booth beside our sister.

Grateful for the chips, I looked at him, smiled, and said: “Thanks, twat.”

Dave and I often called each other these names. It was our thing. No, I have no idea why.

He grinned in response, and then asked how our days had gone so far. After we replied, he filled us in on his eventful morning.

“Leilani asked me out after third.”

Autumn and I gasped aloud at the same time. That was as far as our identical outburst went, however.

Which…apparently…was the wrong thing to say.

While Dave had dismissed it, my sister gave me a dark look.

My brain stalled, shocked by the venom in her gaze. She continued without a response from me.

“Do you mean to say that Dave is incapable of getting a date?”

“No!” I exclaimed. If anything, he was the most capable of the whole school.

Dave and I both stared at her as if she had three heads. Both of us exclaimed:

I added on: “Sis, what’s going on? Why are you attacking like this?”

She didn’t reply, only staring down at her tray. Dave and I exchanged a silent glance, and decided to let it go. She’d talk to us when she wanted to, or she wouldn’t. That was that.

I looked at my brother again and said quietly:

“Thanks,” he replied. We cast one final uneasy glance our sister’s way and then let the silence settle around us.

Later on, after school, just as I was about to exit the building and head towards my car, she approached me.

Now I was surprised. Well, actually more confused than anything else.

“The attack at lunch.”

I shrugged. “It’s okay, just a misunderstanding.” I started on my way once more towards the exit.

She placed a hand on my arm, stopping me just before I made it. My mind rebelled just a little bit at being stopped so close to freedom.

“Luke, it’s not okay. You didn’t deserve that. I should’ve known better. At the very least, I should've acted better.”

I looked at the ginger-haired girl standing beside me looking so sad and went to hug her.

“Sis, I love to death how you jump to Dave’s defense the way that you do. It’s comforting to know he will always have at least one ally to defend him at all times no matter where he’s at.

I wasn’t sure if I was making a lick of sense but I think she got it. I tend to over-explain things, not sure why I do that, either.

“So you’re really not mad?”

I pressed a kiss to her bright red hair.

“Really, really, sis. You riding home with me?”

“No, I have band practice.” She kissed my cheek, noticeably cheerier. “Thanks, Luke.”

I offered her a grin.

She smiled and started off towards the band room and I finally got my freedom from this school for the day.

That night, as I was winding down for bed, Dave came into my room. Well, our room; we shared the room and a bunk bed.

Still, he climbed up to the top bunk where I sat, sat beside me, and asked me a question I’d dreaded for a while he’d ask.

“Who are you taking to Friday’s homecoming dance?”

Immediately my brain began to panic. If I said no one, he’d ask why, and I’d have to lie further.

If I told the truth and said I’d be working Friday night with Elijah and the rest of the theater crew.

Elijah was not a jock, he was a theater actor, and I worked on, like, the sets and stuff, I worried my brother might start to wonder if I had a thing for the lead actor.

There was no real reason for my brain to think he'd make that leap but...still.

I wasn’t ready for him to find out that I did indeed have a thing for another guy--if he somehow made that leap--let alone the most popular one in our school.

I also worried about being judged for it, fearing that he and anyone else who found out would consider me superficial.

I agonized over this for a quite a bit before realizing the idiot I was to agonize over this at all, as it sunk in just how far I was letting my anxiety take me.

“I have to work Friday night, on sets, while the cast rehearses.”

He looked confused, and for a good half a minute, my panic absolutely skyrocketed, three times stronger than before.

I thought that somehow he’d made that impossible connection. In truth, I was just overreacting…you know…like I do.

“Don’t they need the stage to rehearse?”

He had never been in the theater, and probably never would be, even to save his life. It wasn’t that he hated theater or anything.

He simply held absolutely no interest for it. Science however…

I’m getting off course.

“Dave, there’s a whole space behind the curtain at the back of the stage, which is where I build the sets while the cast rehearses in front.”

“Wait…there’s not a wall right behind that?”

I laughed, unable to help it. The responding look on his face cut my laughter short, though. I put an arm around him and squeezed.

“Bro, the theater is a magical place full of many secrets.”

He groaned, rolled his eyes, and playfully shoved me away from him.

“Oh, get off it.” He maneuvered his way down the ladder to the ground and looked up at me. “Wish you were coming to the dance, though.”

He loved those social events but I hated them.

As for Elijah…well, all I really know is that he takes his art seriously. He probably likes dances? He seemed social enough.

I couldn't say for sure, as I'd never bothered to go to any of these social events.

I forced a smile at my twin, and made a promise I already regretted:

The reason my schedule was so tied into the rehearsals was because I was only allowed to work on the set as long as the cast was rehearsing.

I guess either group wasn't allowed to work on their own without the other? I’m not sure why the director wanted it that way, but…that’s how it’s always been at this school.

Dave, seeming to accept my promise, gave me a smile and left the room to go get ready for bed. I began to let my mind wander about what tomorrow afternoon would entail.

I was always thrilled at the prospect of Elijah being so close...just on the other side of that curtain. Almost as if I could just reach out and...