A bizarre disease is turning the world into zombies...but Donovan isn’t turning. He’s developing strange psychic abilities. And he’s not the only one. 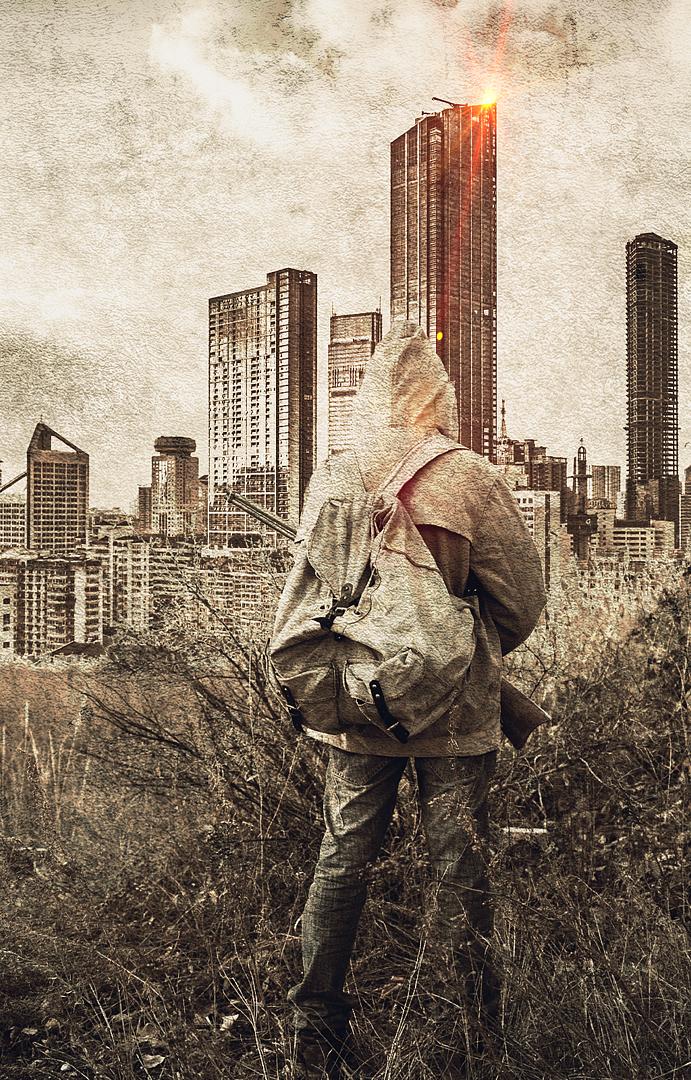 A bizarre disease is turning the world into zombies...but Donovan isn’t turning. He’s developing strange psychic abilities. And he’s not the only one.

His shirt buttons had surrendered to a pale, bloated stomach which had expanded nearly to the point of bursting.

Jagged stretch marks spread across his body and in some places the tinged green skin had cracked open yielding thick, black blood from each seeping wound.

His oversized gut jiggled over the waist of his jeans as he plowed blindly through the underbrush.

He registered the world through faded gray eyes, his jaw slacked and his tongue lolling between his teeth as he stumbled over rocks and roots. The sound of traffic grew louder in his shriveled ears as the trees became sparser.

He broke the light forest behind a row of tall brick buildings and waddled through the darkness of a damp and pungent alleyway. A moan escaped his lips as he recognized the trappings of civilization.

“Not much farther now.” A voice in the man’s skull reassured him.

The grotesque, sweaty man tripped over a bag of garbage, which split open. Wheezing, he stumbled to the ground.

“Hello?” A person’s voice echoed against the brick walls and the man felt excitement surge in his chest. “Is anyone down there?”

The man groaned as a woman came sprinting towards him. “Contain yourself,” the voice demanded as he reached for her.

“Oh my God! Are you okay?” The woman grabbed his hand and struggled to help him to his feet.

The man simply stared at her and moaned, gnashing his jaws under half-chewed lips. He stepped closer and grabbed hold of her arm.

She screamed and struggled as he pulled her towards him. His fat tongue dripped with saliva as it hung from his mouth.

Her cries intensified as the man bit into her neck but the voice in his head protested. “Not now!” it said. “Continue forward. You have a job to do!”

The man tossed the woman aside. She bled and writhed in the loose garbage, her screams now a hollow gurgle. Tears stained her face and she held tight to her tattered neck.

Unconcerned with her plight the swollen man continued down the alley. Daylight assaulted his eyes as he stepped onto the sidewalk shocking nearby pedestrians.

He swiped at them as they rushed past or backed away from his monstrosity. Two men attempted to restrain him as a third rushed to his victim’s aid.

“You’re stronger than them, fight them off!” the voice demanded. Emboldened by the command, the man snapped his bloody jaws at his captors.

Thick, red liquid clung to his chest as he pushed onward, only slightly hindered by the man on each arm.

As he reached the curb the men released him unwilling to be pulled into traffic as he lurched into the road. A car honked and swerved to miss him, nearly hitting an oncoming sedan.

Angry screams erupted from the busy street corner. The blood-covered monster of a man shuffled to the center of the lane.

“Mister! The light!” a boy called from the sidewalk.

The man turned to stare at the boy and his tousled orange hair. He yearned for that young delicious morsel and his strained bowels grumbled in hunger. He imagined that freckled flesh slipping down his throat.

A minivan swerved around him and crashed into the opposite side of the road, sending a tremor along the pavement underneath the man’s blistered feet. Glass shattered. People wailed.

He licked what remained of his lips as he struggled to obey the compelling orders. His primal desire urged him to eat the boy, to feel those tender muscles tearing between his teeth. But that distant voice was undeniable.

The boy called frantically as the air horn of an eighteen-wheeler blasted from the man’s right side. He turned in time to see the large grille of the vehicle as it slammed against him.

With a sudden feeling of sweet release, the man’s distended belly split on impact. Congealed, dark blood exploded from the tearing flesh, followed by yellow fat and putrid intestines.

Then, finally, the dust.

A glittering cloud of dust poured from the man’s exploded torso. It lingered in the air, each particle moving with purpose.

The boy inhaled and felt sand in his throat while other witnesses clasped their faces with frightened and trembling hands.

The misty powder quickly dispersed and was carried on wind currents as it sparkled in the morning sunlight.

People on the sidewalk questioned their belief in God, fearing and wondering what they’d just witnessed. Some whimpered quietly to themselves as they coughed clouds of silver powder, watching it like puffs of frozen breath.

“Oh my God, Matthew?” A woman in various layers of animal print shrieked from across the street. She ran to the boy and the strangers on the curb looked wary. “It’s okay, I’m his neighbor. Matthew, it’s me, Heather!”

Matthew turned to Heather and wailed, falling into her arms as the others on the sidewalk gathered themselves.

Heather patted Matthew’s back and made soothing sounds for him, swinging him back and forth gently as he cried into her shoulder.