This Romance Book is Seducing Millions Of Women Around The World

The Arrangement, one of Galatea’s most explosive stories, tells the story of a love contract between two people you’d never put together: a broke 23-year-old virgin, and NYC’s biggest playboy billionaire. Can what started as strictly business turn into pleasure?

When Angela’s dad has a stroke, her whole world shatters. But then the wealthiest businessman in New York City makes her an offer of a lifetime: marry his playboy son, and all of her dad’s medical bills will be taken care of. Angela’s a good daughter, but she’s about to see just how much she’s willing to do for her family.

The app has received recognition from BBC, Forbes and The Guardian for being the hottest app for explosive new romance novels.

Scroll down to read the first chapter, or download the app for the full experience! 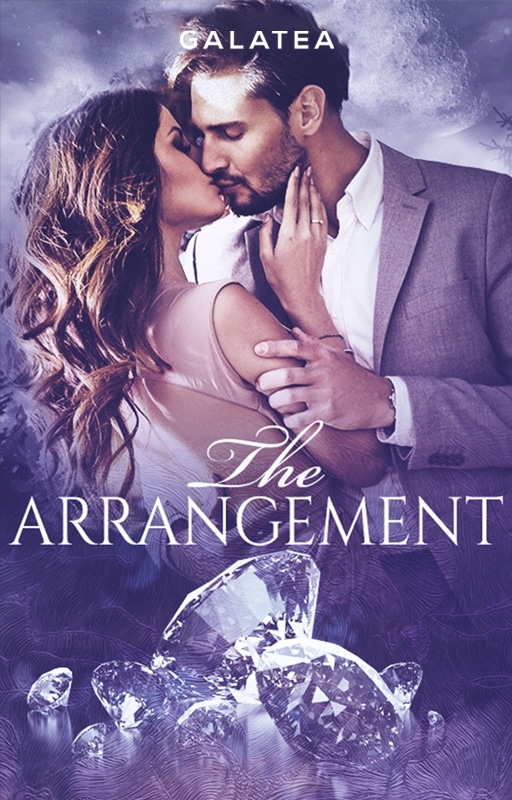 > Read the full book on Galatea <

The scalding hot water cascaded over my skin, but no matter how hard I scrubbed, I still felt dirty.

The idea of using someone like that was enough to make me sick, and yet that was exactly the type of person he so wholly believed I was.

That was when the irony hit me.

I was after his money.

If it wasn’t for the Knight fortune, I never would have agreed to marry Xavier Knight.

But I wasn’t doing it for selfish reasons.

I was doing it to save my dad’s life.

But does that make things any better?

After turning off the shower, I wrapped a towel tightly around my body. Anything to help hold me together.

I dried off and slipped into my pajamas robotically, my mind far away.

As I collapsed into bed, my eyes fell on a framed picture across my room. It was a photo of me, Danny, Lucas, and my dad.

We all looked so happy.

The photo was taken just last Thanksgiving. Danny had burned the turkey and Lucas had made way too much stuffing, but it was perfect.

We’d all squished into the old, worn-out couch in the living room and watched football with no worries about the future.

I put my head in my hands.

How has so much changed in just a year?

Dad had always been such a pillar of strength. After mom passed away, he’d taken on the role of both parents. He was the one constant, a steady rock in the storm of life.

And now he was in the hospital, and I wasn’t sure if he was going to—

My phone buzzed. It was my best friend Em:

I stared at the little sushi emojis, the tiny unassuming picture saving me from my thoughts.

The last thing I wanted to do was go out in public. My blankets whispered seductively to me, tempting me with the promise of darkness and silence.

But maybe going out was exactly what I needed. Even if it was to escape my thoughts for an evening.

“You’re too good for Curixon anyway,” Em said, popping another piece of salmon sashimi into her mouth.

I dipped my own tuna nigiri in soy sauce, humming noncommittally. “I still don’t get it,” I muttered. “I had such a good feeling after my interviews.”

“Well, it’s their loss.” Em snatched up a plate of salmon sushi from the conveyor belt in front of us. She was quickly amassing a little tower of empty plates beside her.

I chewed on my food, not tasting it at all.

If only Curixon had panned out. Maybe I wouldn’t have ended up getting engaged to a hateful billionaire…

My eyes roamed lazily over the slow-moving conveyor belt in front of me. I had so many choices, but none of them were even slightly appealing.

Em placed a salmon roll on my empty plate. “Anyway, we didn’t come here to mope.” She smiled at me, and I couldn’t help but feel my spirits rise a little. “Happy Pre-Giving.”

“Happy Pre-Giving,” I replied, and we tapped our sushi pieces together before eating them.

Every year Em and I had our own pre-Thanksgiving meal before we went back to spend it with our families.

“Anyway,” Em said around a mouthful of food, “did you hear about the commotion in Central Park earlier today?”

“Apparently some mega-rich couple held a fancy prewedding photo shoot. They even blocked off an entire section so no one could get close.”

I choked, trying my best to not send sushi bits flying over the conveyor belt.

Em slid me a glass of water. “I know, right? How crazy is that?” She sighed, wistful. “Imagine being so rich and in love that you could reserve Central Park.”

I chugged down some water, then cleared my throat. “Yeah, i-imagine that…”

I couldn’t exactly tell her that that was my prewedding photo shoot.

Nor could I correct her.

Sure, Xavier was mega rich.

But we were definitely not in love.

The look of hate and disgust in Xavier’s eyes flashed into my mind again.

Nothing could be further from the truth.

I blinked, snapping out of my thoughts. “Of course,” I lied.

Em stared at me, her eyes searching mine. I’d never been a good liar. And Em knew me better than anyone.

But I couldn’t have told her the truth if I wanted to. I couldn’t tell anyone. Not even my family. They’d probably find out eventually. It was impossible to hide such a high-profile marriage forever.

But they could never know the truth about my deal with Brad Knight.

I was literally contracted to lie.

Read the full uncensored version on the Galatea App!

“Anyway, I’ve got to make some last-minute preparations for Thanksgiving tomorrow,” I lied again. “I’m gonna head back.”

“Okay,” Em said, her tone neutral. I couldn’t tell if she believed me or not, but she let it drop.

We got up, and after paying we headed out into the cool evening air. My heart felt heavy with guilt. I’d had to lie to my best friend.

And that was just the beginning…

i’ll go back and get it

just come help with the turkey before Danny burns it

Sighing in frustration, I leaned back in my chair and closed my eyes.

I couldn’t believe I’d forgotten the pecan pie. It was pretty much a staple at Thanksgiving.

The train went over a bump, and I shifted in my seat, leaning my head against the window and gazing at the scenery that blurred past.

I’d be at Heller in an hour; I wished I was already there.

Dad had assured us he was well enough to have Thanksgiving at home.

I felt my heart relax. It dawned on me how relieved I was to be getting away from New York. Even if it was just for a couple of days, some time away from the drama of the arrangement would be good for me.

It would give me space to breathe and come up with a plan.

After what felt like an age, I was finally walking up the front steps to my childhood home.

I knocked on the door and Lucas answered, wrapping me up in a big bear hug.

“You smell like train,” he said, pulling me into the house.

“Nice to see you too,” I said, sticking my tongue out.

I walked inside and a wave of nostalgia hit me. This was where I had grown up. The house that had seen me celebrate and mourn in equal measures.

This was where Em and I used to sneak R-rated movies into the DVD player, where Lucas and I used to build pillow forts and eat Nutella from the jar.

But being back now, with everything that had happened, it felt different.

Like somehow, this house couldn’t protect me from the world outside anymore.

“Is that her? Angie?” And then there he was, rolling into the hallway in a wheelchair. He looked more like Dad than the man in the hospital bed had.

“DAD!” I leaped toward him, hugging him hard. He really did look healthier. Seeing him out of the hospital hardened my resolve.

If putting up with an angry billionaire meant that Dad would be okay…then so be it.

“Jeez, Angie, I’m here,” he said, laughing. “I’m not going anywhere, little pea. Unless you roll me there.”

“I know.” I tried to sneakily wipe away a tear before it spilled out of my eye. “I’m just happy to see you. You look great.”

“Ready to see the turkey?”

“I HEARD THAT!” Danny shouted from the living room. I knew he was already sitting on the couch watching football, his eyes glued to the TV.

I couldn’t stop the goofy grin from spreading across my face.

This was exactly what I needed.

Our doorbell rang, and we all looked toward the door in confusion.

“Are we expecting anyone?” I asked Lucas.

“No, she should be with her mom.” I walked toward the door and opened it…

And just like that, my little Thanksgiving sanctuary was torn to pieces.

Because standing there, looking handsome and perfect and completely out of place with a box of pecan pie in his arms, was Xavier Knight.

He flashed me a brilliant smile, but it didn’t reach his eyes. They looked cold. Calculating. Like a wolf playing with its food before it lunged in for the kill.

My heart kicked into overdrive. I was about to have a full-blown panic attack. My family didn’t even know I was dating anyone, much less getting married to the richest bachelor in New York City.

“What are you doing here—”

“Angela?” Dad called from behind me. “Who’s that?”

A pit of dread opened up in my stomach as I heard my family approach behind me.

Xavier stepped up beside me, his cruel, mocking demeanor gone in a flash.

He wrapped one arm around my waist, and smiled down at me, his expression exuding love and affection. He looked like the definition of the perfect partner.

But I knew better.

He hated my guts. His touch felt more like a shackle than an embrace. I felt my dad’s and my brother’s gazes zero in on the gesture, and my face burned from embarrassment and shame.